"The blues music has power and can reach the people. Sometimes the parents who listen to the blues pass the music to their children’s. Also thanks to the new generation of blues artists whose music was inspired by old blues music."

Petra Börnerová Trio is a project of Czech vocalist Petra Börnerová and her husband, drummer and guitarist Tomáš Bobrovniczký and their son Tomáš. Their repertoire is based on blues covers and also original folk-blues compositions. Petra can tell a story in a song, with lots of technique to spare. The trio have an interesting, light approach to blues which makes their performances intimate and engaging. Petra Börnerová trio has given already hundreds of concerts, not only in the Czech Republic, but also in a number of other European countries. They are used to play, record, support, shared stage or jam with many well known international artists including: Gwyn Ashton, Eddie Martin, Bob Margolin, Chris Duarte, Kenny Neal, EB Davis, Guitar Shorty, Louisiana Red, Billy Branch, Eric Bibb, Steve Big Man Clayton, Hans Theessink,... and many others. Tomáš Bobrovniczký was named „Bluesman of year 2012“ by the Slovakian Blues Society. Petra Börnerová trio is the winner of „Czech Blues Challenge 2022“. 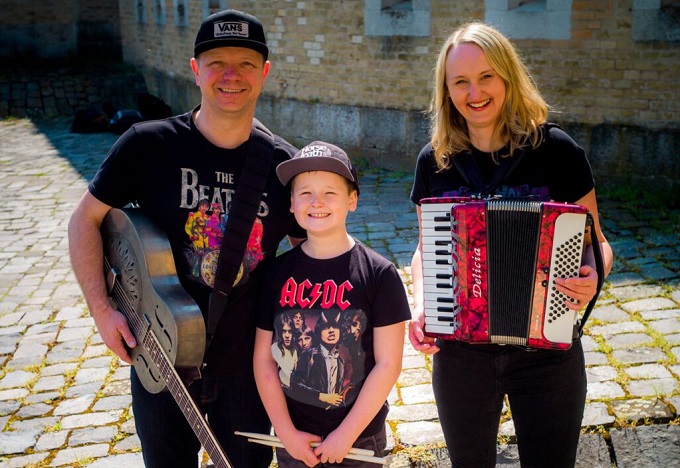 Petra Börnerová, a female Blues singer from Czech Republic, has been performing on the  European scene already since 2005. In the past she was a singer of the „orthodox“ (urban) blues, but now she is also inspired by elements of jazz, folk and rock. As a result you will find sophisticated jazz-blues composition with an amazing high level of her vocal expression. Her set list includes own compositions as well as cover versions from great artist like Keb’Mo, Eric Bibb, B.B. King, Robin Ford, Eta James and others. Tomas Bobek Bobrovniczký started to show his interest in music as a child. He started to play drums in 1995, during the graduating from High school. His first band D’Mess was an alternative punk-rock band. Even thought his parents was not happy with his idea to continue drumming, he became more and more absorbed in music. He played in regional blues and rock bands, but his first professional music experience came with the famous Slovakian funk blues group “Bluesweiser“ in 1998. From 1996 he played in many bands and artists. Tomas Jr. born in 2009 in Prague, Czech republic. He started to show interest in music as a child. When he was 3 years old, he got his first drum set. Since 2015 he regularly play with his parents. Petra Börnerová Trio will be the Czech participation at the European Blues Challenge, Chorzów in Poland (June 1-3, 2023).

Petra: Blues tells the story about the life. Because of Blues music I realized what things in life are important for me.

Tomáš: The Blues and Roots music (also rock, jazz music) was in my life almost from the beginning. My father was a musician too and we had blues and rock records at home.  I grew up on the music of Johnny Winter, Jimi Hendrix, Colosseum, Deep Purple, Cream, Beatles, Rolling Stones,... But the Blues was most close to my heart. Later when I was 17, I discovered more blues artist like B.B. King, Eric Clapton, Robert Johnson, etc. It was so emotional music for me, that I decided to play blues music. I think blues music connect the people of different nations and religions. It is not only about 12 bars, but it’s about feeling, emotions and moods. The blues can tell a story.

How do you describe your sound, music philosophy and songbook? Where does your creative drive come from? How did the idea Tomáš jr. will be member of band come about?

Petra: I still looking for my own sound. I like to be natural. The color of my voice has changed due to different periods of my life. Big inspiration for my songs are my experiences in my life. I write songs in Czech language.

Tomáš: We have no band philosophy. We like to make and play music. It’s a very big benefit for us that we can be on the road together. None of us are virtuosos. We would like to sound like a compact, emotional, happy band with our own sound and face. When Tomas Jr. was 3 years old, he got his first drums. Since 2015 he has regularly play with us. I let him try my drums and he was really interested. I bought him a ukulele and tuned in open E. He played with us a Jimmy Read song "Baby, What you want me to do". He could not play the cords, but he played the rhythm with his right hand on the ukulele. Later I bought him a Cajon and played with us 2-3 songs. We knew that he would be a drummer. Now he has better technique at drums than me. 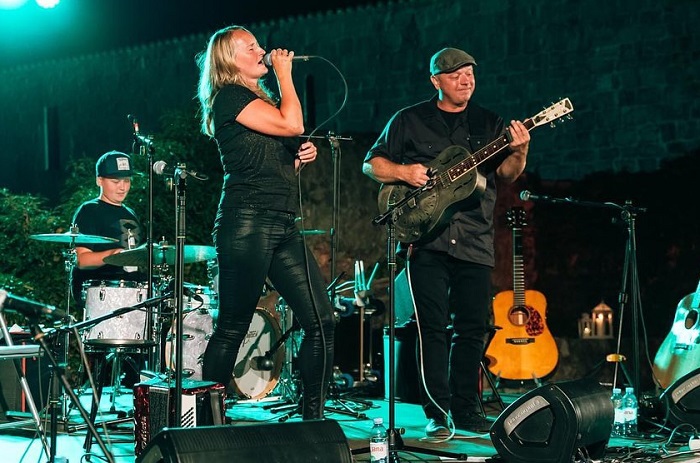 "I think blues music connect the people of different nations and religions. It is not only about 12 bars, but it’s about feeling, emotions and moods. The blues can tell a story." (Photo: Petra Börnerová Trio)

Why do you think that the Blues music continues to generate such a devoted following in Europe?

Petra: The blues music has power and can reach the people. Sometimes the parents who listen to the blues pass the music to their children’s. Also thanks to the new generation of blues artists whose music was inspired by old blues music. (Larkin Poe, Beth Hart, John Mayer,..)

Tomáš: The Blues music has a wave in Europe and on the World too. In some years the Blues music was very popular, some years not so. Currently it is not the most popular style of music in the world, but the music industry always finds some artists they came from blues music or play music with blues influence. The blues, jazz, soul, rnb and gospel music are the roots of all music. The young people listen more current artists, but they also discover the old records and artists. Europe was always very open to Blues music. There are a lot of Blues festivals and clubs Europe. And more bands than 15-20 years ago. I remember when we had concerts in some small venues and young people came to us. They told us that they never heard blues music before. And they liked it very much. So, I think there are still many people and regions where the blues is not well known. The people r very open to the BLUES music. We need more blues music in radios and TVs.

What would you say characterizes Czech blues scene in comparison to other European scenes?

Petra: Czech Republic is a small country, and the blues scene is not so popular, but we have some good blues artists.

Tomáš: I’m Hungarian with a polish surname born in Slovakia who lives in Czech Republic. So Vise grad 4. My first blues bands (as a drummer) were in Slovakia.  I think 20 years ago there were more interesting blues bands in Slovakia than in the Czech Republic. The Czech blues scene was more about folk or rock bands with blues elements singed in Czech language. So not the "American" style of blues.  Of course during the communism times the first generation of blues bands and artists had minimum possibilities to get some „American“ music. So, they played the blues how they felt it. The next generation of musicians had more possibilities to learn to play blues, listen to music and buy good records and visit some concerts. We now have good blues bands and musicians in the Czech Republic who can play „Real" blues.  Some of the Czech blues musicians cooperate and play with US artists too. For example my friend Jan Korinek, great Hammond organ player, who plays with Chris Cain, Lorenzo Thompson,…or Ondřej Pivec ,who plays Hammond organ with Gregory Porter. I cooperate as a drummer with Gwyn Ashton, Steve Big Man Clayton and Eddie Martin.

So, the Czech Music scene now and very similar to other EU blues scenes. We don't have so many festivals and clubs in the Czech Republic as in „West“ Europe. But we have some. The biggest ones are Blues Alive festival and Blues Road festival.  I also organize a Roots & Blues festival (Pure Music) for 18 years. Since 2023 I’m a member of Czech Blues Association who organize 2 festivals. Of course, during and after Covid times a lot of things has changed. We must find the way how to get back the people to clubs and festivals. It will need time. 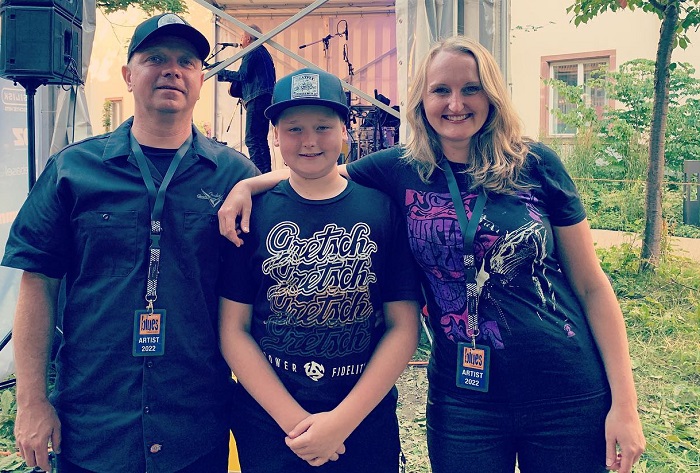 "I miss the atmosphere of the concerts in the clubs. I’m afraid due the online platforms the live music performances will finish. I hope I can make music until the end of my life. The music makes my life rich and happy." (Photo: Petra Börnerová Trio - Petra Börnerová; Tomáš Bobrovniczký and Tomáš Jr.)

Petra: The session with Chris Duarte, Hans Theessink and meeting with Keb' Mo and Eric Bibb. Also, it was a pleasure to met Hubert Sumlin and Duke Robillard.

Tomáš: We performed at big European blues festivals, we met nice people and some famous blues musicians too. One of the greatest memories was when we met Mr. Keb' Mo in Prague. He was so friendly to us, and we had a nice talk about life and music. Or when we met Bob Stroger and James Wheeler in Germany. We also played and jammed with artists like Chris Duarte, Hans Theessink, Billy Branch, Bob Margolin, Louisiana Red,...We can talk about it hours and hours.

Petra: I miss the atmosphere of the concerts in the clubs. I’m afraid due the online platforms the live music performances will finish. I hope I can make music until the end of my life. The music makes my life rich and happy.

Tomáš: I miss the audience. After the covid times and clubs are not so full like before. I think the online platforms (Spotify, Youtube,...) are slowly killing live music. Some people Listen to music online, so they don’t need live concerts anymore. We are happy to have day jobs during covid times. But it is difficult to work and make music. Our dream is to live only from music. I think it will be not possible due to the economic crises and unstable situation. Our wish is to stay healthy, happy and that we can share our music with people. I hope we can continue with concerts and travelling. We hope our son Tomas jr. will be a musician and he can play with some good artists too.

Petra: I try to be professional, friendly, and natural not only on the stage. Thanks to music experience, I'm now more open to people and relaxed on the stage. I started to enjoy the concerts and the atmosphere.

Tomáš: To be reliable and friendly, to be on time everywhere, play from the heart and on 100% even if you have 3 people in the room. 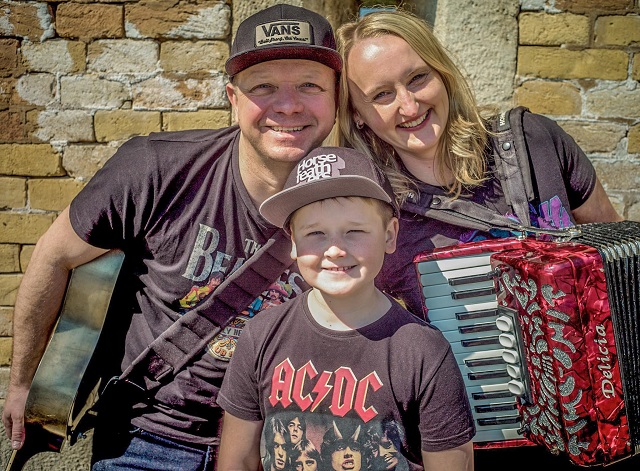