"I think I would want to change the level of patience and sense of subtleness of both the listeners and musicians. These days you have to be a bit more "extreme" to even get noticed. People don't seem to appreciate the simplicity and will to just groove without some fast and crazy soloing lines."

“GROOVE” - No word better describes Jan Korinek’s music today. His style evolved from pure blues roots into a soul-jazz-funk feeling with strong blues influences, exploring and presenting the roots of this great music. He is a performer who never gives less than everything he has each time he takes the stage. Over twenty years of touring, recording and surviving in the music business ensure that his soul has stories to tell filled with the blues as well as humor. Since 1995 he has been discovering genres that are closely connected with the blues and has been naturally mixing them to create new flavors on stage. The Czech multi-instrumentalist, composer and producer gives his heart, mind and soul to his music. He actually started his professional career as a bass player, something which has stayed with him on the keyboard, giving funky, left-hand chops that even bass players marvel at.                     Jan Korinek / Photo by Andrew Olifirenko 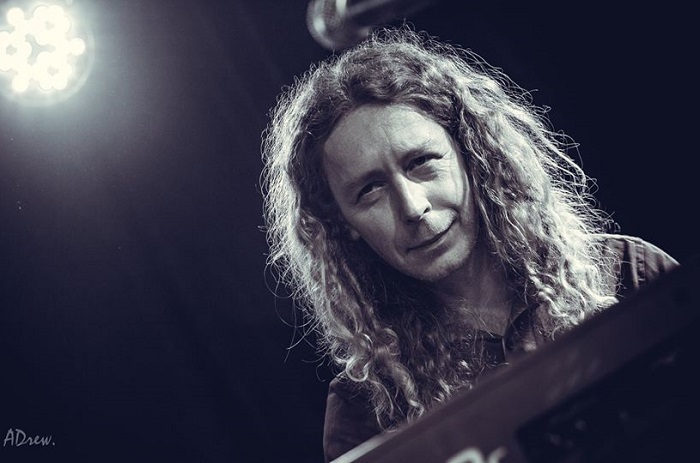 His music closely follows the tradition of the great Hammond organ combos (such as Jimmy McGriff, Jimmy Smith, Richard Groove Holmes etc), walking a thin line between blues and jazz. He has been touring with various artists such as Chris Cain, Carlos Johnson, Lorenzo Thompson, Eb Davis, Sharon Lewis, John Lee Sanders, Jean Toussaint, Chick Willis, George Freeman, to name just a few. Jan Korinek was also a guest of several groups, for instance The Kinsey Report, Sharon Jones and the Dap Kings, and he has appeared on numerous studio recordings as well. He played at many major European jazz festivals. Besides focusing on his bands, Jan has been running his own recording studio called Reel Blues Studio and produced and released numerous records under his record label, BlackTown Records.

Blues and Jazz music basically became my world. It's the place where I feel safe. The music is taking me around places and it made me discover that people are just people everywhere, that we are all the same and we can all feel the highs and lows of life. That’s the magic of the Blues, it makes people understand without the need of speaking the language.

How do you describe your songbook and sound? What touched (emotionally) you from the sound of Hammond?

I like to stay on the edge between jazz and blues music based on many influences mostly from African-American music of the 20th century. As I was growing up, I was first slowly discovering the greats like Ray Charles, the Kings including Nat Cole, Johnny Moore, Willie Dixon, Earl Hooker, Eddie Cleanhead Vinson, just to name a few. When I discovered the Hammond organ, I started to enjoy the music of Jimmy McGriff, Jack McDuff, Shirley Scott and Milt Buckner. My sound and originals are an always evolving mix of these influences, right now we have a trio album coming up full of originals, tributing the sound and feel of the great organ and saxophone heroes. The thing that caught me about the Hammond is mostly the urgency and versatility of the instrument. I could make it cry, scream, sound like a big band. The real Hammond organs have sort of an unearthly feeling to the sound that I believe can be healing if used properly. It is one of a few medicines that is hard or even impossible to overdose with. thanks to Leanne Kiddo Rivers 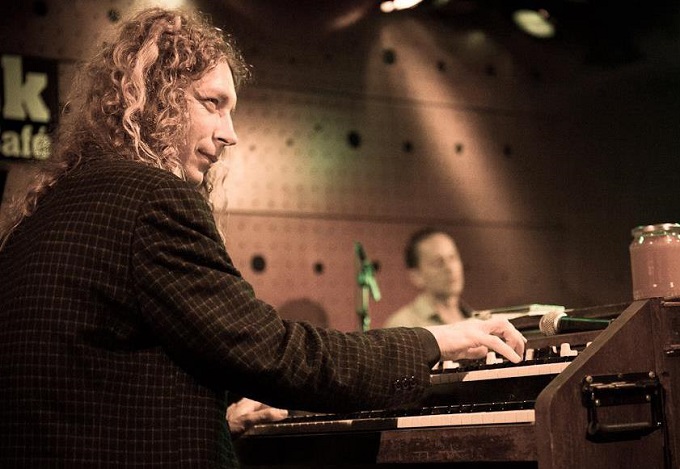 "I miss the depth of it. I hear a lot of musicians say "Blues is easy". It's everything but easy. I am discovering new levels every day. Second thing I am a bit sad about is jazz musicians avoiding The Blues in their music." (Jan Korinek, Prague, Czech Republic / Photo by Filip Suk)

There have been quite a few, and everybody gave me something. First there was my father. I think that he gave me the love and understanding of what I call the "swing core", something we are not born with in this part of the world. In the 90s I spent a lot of time playing and spending endless nights listening to the Blues with freshly relocated guitar player Rene Trossman. Later on, singer Lorenzo Thompson taught me two important things, to play every show like it was my last and to "keep the pocket", stay in the time and space and enjoy it and not do anything to distract the moment. Second thing I learned from him and Sharon Lewis is to play every concert like it was my last, go all the way every time I'm on stage.

Some years ago me and my band was invited to play a few shows with George Freeman, legendary jazz guitar player. From him I received more than an advice, I felt like I was "approved" by this man and this was a life changing moment for me, realising that I am possibly on the right track. Last summer I spent a week with Kirk Lightsey and just being around, listening to the stories and jamming together brought me another step closer to the concept of making music. Kirk, now in his 80s, likes to say "It is happening NOW, nothing but now exists, this is it, so you might as well enjoy it."

Of course, there are many stories, from forgetting half of the band at a gas station to sleeping on a stage we just finished playing on. I remember a great evening hanging out and jamming with Kirk Lightsey and George Freeman at Inntoene Jazz festival. Also meeting Chris Cain and playing "Sitting And Wondering" together has been quite life changing experience for me every time we play this tune. Also, it's an honor for me to play and record with Miss Chanda Rule, who has been taking me on deep journeys into the gospel and spiritual world. 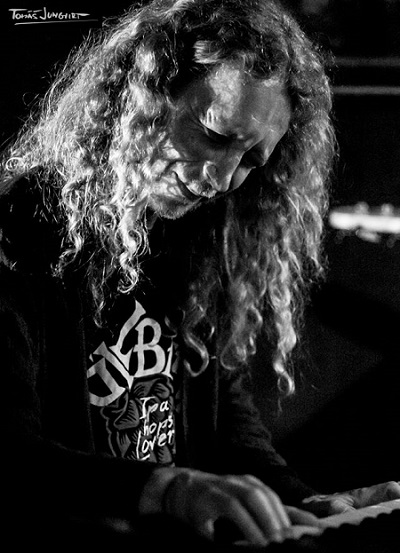 I miss the depth of it. I hear a lot of musicians say "Blues is easy". It's everything but easy. I am discovering new levels every day. Second thing I am a bit sad about is jazz musicians avoiding The Blues in their music. It feels like they think it's something dirty, something that doesn't belong in their "art". For me it's like eating soup without liking the broth. Thing what keeps me going is that the Blues is one of music styles that everybody can understand and everybody can identify with, if they give it a chance. Everybody felt the blues in their life, I'm pretty sure of that. And the future, I'm trying not to think about that however I've been running a blues workshop in Passau for the past few months and I am happy to see people of all ages coming to do the same thing, feel the blues together. So, there is light at the end of the tunnel.

I think I would want to change the level of patience and sense of subtleness of both the listeners and musicians. These days you have to be a bit more "extreme" to even get noticed. People don't seem to appreciate the simplicity and will to just groove without some fast and crazy soloing lines. Solos have become a show-off more than pure feeling and fun. There is no need of playing guitar behind your head anymore.

The blues scene in Czech is quite small, I think it has historical reasons. Back then under the communist rule, there was not many recordings available, especially American blues records. Forget the radio. There were only a few jazz records released every year. So instead of Muddy Waters and BB King, the blues in CZ was more rock influenced due to better availability of the British blues records of the 70s. Things started to change in the 90s when the borders opened. Many artists started coming from all over the world such as Rene Trossman and Ramblin Rex and suddenly we had the chance to touch the more authentic type of the Blues and actually tour with these people.

The most interesting period, well, I feel like the time is now. 30 years after the revolution I see great young blues musicians rising, such as guitarists/singers Jiri Marsicek, Marcel Flemr, St. Johnny, saxophonist Osian Roberts or young harmonica player Ondrej Zlabek. These guys take the depth and style very seriously, giving me hope that if I make it to 80, I will still have someone to play with...

When I think about this, it would be some time when jazz was still blues and swung. I would most likely go to the 1950s and find Milt Buckner somewhere touring with his organ and Illinois Jacquet, Buddy Tate or Arnett Cobb, possibly also with Jay McShann. Best would be all of them at once. The reason is the blues, again. They could play so deep blues I get goosebumps just writing about it now. I think would be happy almost anywhere between 1940 and 1970 in the USA, or 60s-70s in France, to see the same cats. 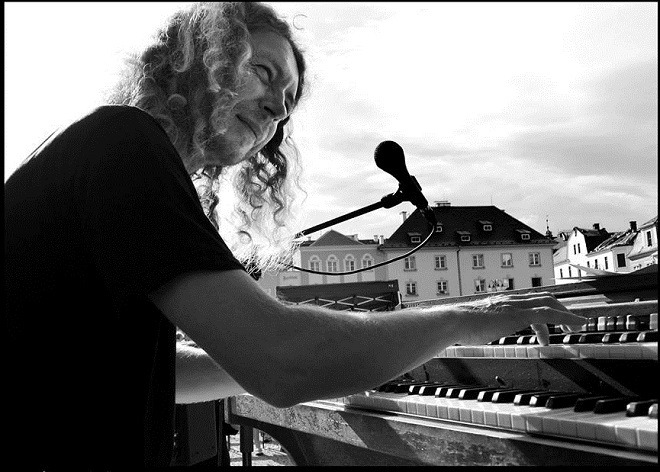