Q&A with Czech musician Matej Ptaszek - one of Europe's top harmonica players in the field of traditional blues.

"I most regret that I could never meet the fathers of Blues such as Howlin Wolf, Sonny Terry, or Muddy Waters. Regarding the future, my philosophy as an adventure and blues enthusiast is to perceive present and refuse to worry about my existence in future. I live in the present and I enjoy it!"

Matěj Ptaszek: Blues Around The World In 2011 Matej wrote the groundbreaking and comprehensive book "School of Blues Harp" for the prestigious Czech publisher Powermusic.  Matej has shared the stage with many legends he looks up to such as: Johny Winter, Lousiana Red, David Evans, Steve Baker, Marc Breitfelder etc. His highly acclaimed debut album „Live in the Prison Mirov” was released in 2008. His album supporting tours took place all over Europe and beyond. A Live performance CD “Live in Acropolis” (2013) and another studio album “Bluesgrass” (2014) followed while the Good Morning Blues band was consistently on the road (festivals in Germany, Belgium, France, etc.) He traveled in South America, where he started a new blues project with local musicians.

Blues and its fathers helped me learn how to perceive its artistic beat of passionate heart. It is difficult to explain, but to me Blues is a life coursebook teaching me to hang on, not to give up.

How do you describe your songbook and sound? What touched (emotionally) you from the sound of harmonica?

I once asked my father how he‘d met my mother. He told me: „I had some LPs of old bluesmen and your mother had a record-player. So I always took my LPs to her and we found out we had a lot in common, including love for Blues and creative freedom.“ Those blues LPs accompanied me throughout my childhood, and I still have them even now. It is simple: I am almost forty and I have been listening to Blues for almost forty years. And as for the sound of harmonica? It is as breathtaking as the rumble of thunder, sound of the sea, whisper of lovers, or purr of a cat. Harmonica is simply an amazing instrument. 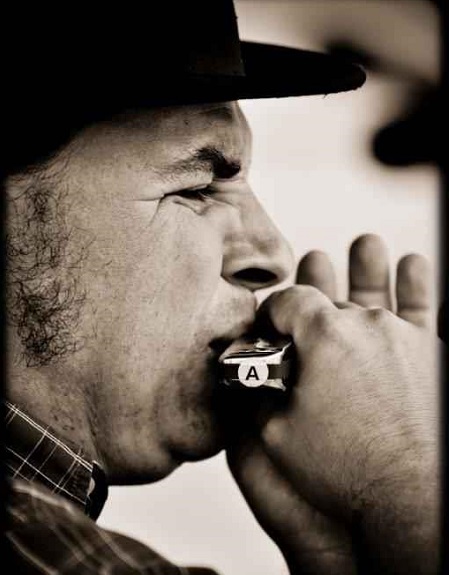 My most influential experience was when I met a German virtuoso harmonica player Marc Breitfelder who I personally consider to be the most remarkable, imaginative, and perceptive harmonica player of these days. Marc once shared a beautiful thought with me: „Player does not need any technical conveniences or miracles. The best he has, is his mouth, ears and heart.“ There is a lot of truth in it. This advice helped me improve a lot and I am truly grateful for it.

Are there any memories from gigs, jams, buskin time and studio sessions which you‘d like to share with us?

In the past 14 years, I have played in about 1500 concerts in 13 different countries on two continents. I have attended around 100 various blues, jazz and harmonica festivals including the legendary World Harmonica Festival in Trossingen. Although there were hundreds of wonderful experiences, I have exceptionally strong memories of playing in Medellin, Colombia where I spend more than a year. I will never forget the time on the Antioch University campus when some radical students threw three homemade grenades at the stage just an hour after my performance. All the stage burned down, including a few teachers‘ motorcycles. That is simply Colombia-style blues. I can also remember a very strong experience I had at the biggest Blues festival in Quito, the capital of Ecuador, where 3000 excited indians chanted my name, pressing for a few encores.

It was also incredibly interesting when I got a chance to produce a blues record with the most dangerous criminals in a maximum-security prison Mírov in 2008. The expressivity gave me a few sleepless nights at that time. I was also involved in a famous Czech film Občanský průkaz, a sad comedy about troubled times during the communist regime when the police persecuted rockers and hippies.

I most regret that I could never meet the fathers of Blues such as Howlin Wolf, Sonny Terry, or Muddy Waters. Regarding the future, my philosophy as an adventure and blues enthusiast is to perceive present and refuse to worry about my existence in future. I live in the present and I enjoy it!

If you could change one thing in the Czech blues scene and it would become a reality, what would that be?

There is nothing I would change about the Czech blues scene. I stick to a simple principle: I honour competition, I am not worried by it, I do not occupy myself with it, and I do not engage in dirty tricks or intrigues. I find this absolutely esssential for peace not only on art scene but on any scene anywhere in the world. "Blues and its fathers helped me learn how to perceive its artistic beat of passionate heart. It is difficult to explain, but to me Blues is a life coursebook teaching me to hang on, not to give up." (Photo: Matej Ptaszek plays the blues in Colombia, South America 2017)

What are some of the most important lessons you have learned from your paths in Latin America and local music?

I spent more than 38 months in South America - 18 months in Ecuador and 21 months in a little cowboy village near Medellin in Colombia. I gave numerous performances with many amazing musicians from Ecuador and Colombia but also with immigrants from Venezuela and Argentina. There is one very important thing I learnt from South American musicians: not to be stressed because of sound on the stage, and to remember that my heart must please visitors of the concert. I feel that it is their immense love for music what makes South American musicians so enchanting.

When I was about 8, my parents took me and my brother to a concert of a band Bluesberry, which was historically the first Blues band. The leader of the band, blues singer and harmonica player, Petar Introvic fascinated me by his spontaneous and original style. Moreover, the band Bluesberry had some cover versions with very funny Czech texts which commented on freedom and communist regime that ended in 1989. I and Petar became friends many years later when I had established myself on the local scene, and I am still genuinely grateful for this friendship. I think the most interesting period of Czech blues was the turn of the 21st century when Czech blues scene was experiencing huge support of the public, including television which regularly produced and broadcast blues concerts until 2009.

Unfortunately, the Czech Republic is experiencing very dangerous tendencies towards deviation from democracy, as well as deeply disturbing signs of intolerance in these days. It hurts me to see reckless and cynical ultra-left and ultra-right politicians come to power. From my point of view, blues is a symbol of intellectual fight for human rights and individual freedom. We can see that in the history of Blues. I will be extremely happy when the majority of Czech voters open their eyes again and tell those cunning populists and power-hungry radicals to f*ck off as it happened in 1989 when a monstrous communist totality and despotism finally came to an end.

Let‘s take a trip with a time machine, so where and why would you really want to go for a whole day?

If I had a time machine, I would travel to a Folk festival in New Porto in 1964. It must have been fantastic!