"I mostly miss all the characters, the old timers, the real deal blues guys and all the craziness that we all experienced together. The situations we all found ourselves in the good and the lousy gigs. The cool clubs and the shithole clubs.  As for the blues music of the past, I miss the simplicity, the grooves, the soul."

Kenny Parker’s blues education began with the Beatles in the early 1960s, but it wasn’t long before he discovered the roots of their music. Parker grew up in Albion, Michigan and began playing in his first band, the Esquires, at 14. He discovered Albert King and B.B. King in high school via the local record store, and he took his inspiration from them. After graduating from Eastern Michigan University in 1976 and took a job in a Cadillac factory while looking around for the right opportunities to play blues at night. He began working with a paragon of the Detroit scene, Mr. Bo (Louis Bo Collins), and later joined the Butler Twins.                   (Kenny Parker / Photo by Chuck Andersen) 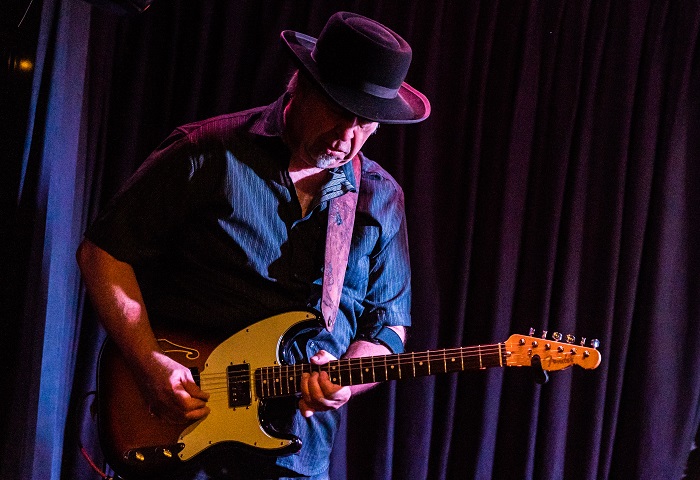 While Parker toured Europe with the Butler Twins, JSP founder John Stedman heard him and decided to sign him up for his own recording. The Butler Twins accompanied Parker on his debut recording “Raise The Dead,” where he was also backed by harp master Darrell Nulisch, best known for his work with Anson Funderburgh and the Rockets. Roaring out of the fiery furnace of the motor city music scene is “Hellfire” (2019), the new album from Detroit blues guitarist and songwriter Kenny Parker. The eleven tracks feature Parker’s veteran band and his new collaboration with the legendary Jim McCarty and the debut of Dan Devins on vocals and harmonica. Parker and McCarty bring all their experience to bear on the collection of hard-driving blues rockers.

I learn that I don't know everything. I learn that I can be teachable. I’ve learned to appreciate and value those from different backgrounds. We all have hopes and dreams and all try to do our best. We all bleed red (not red state red lol). Blues means everything to me. It is the foundation of all of the music that I care about and have built my career in music around. It has been the one constant in my life for well over 50 years. It has been at the root of all our (U.S.) popular culture at least since the turn of the last century.

My songbook is an amalgam of everything musically that has touched me in a good way, mostly blues but also rock and roll (the Chuck Berry/Jerry Lee Lewis school of rock and roll) with emphasis on the roll. Also, hillbilly and country music play a part. I aspire or have aspired to be a traditionalist interpreter of the blues but, it hasn't turned out that way. I am a sum of everything I love which I would say is more on the blues rock side of things with occasional forays into more traditional styles. My creative drive comes from a need to express who I am, how I feel. I am driven to do this as if my life depends on it because it feels like it does. I feel like I need this to explain to the world who I am in a way I never have been able to do in any other way. 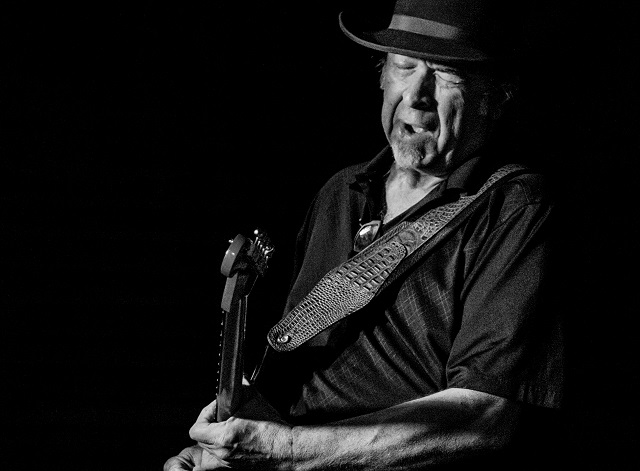 "I learn that I don't know everything. I learn that I can be teachable. I’ve learned to appreciate and value those from different backgrounds. We all have hopes and dreams and all try to do our best. We all bleed red (not red state red lol). Blues means everything to me." (Kenny Parker / Photo by Dori Sumter)

Meeting my bass player/longest motor city friend Mike Marshall has been the most important element in my musical development. He is my rock. He is to me what Ian Stewart was to the Rolling Stones. Also, Jim McCarty but not in a way many might think. When I started hanging out in Detroit in the early 1970s, he was the daddy of all Detroit rock and roll guitar players. a title that he still holds without interruption since the mid-60s. I learned so much from watching him play way before I ever became friends with him. Mainly an attitude, an intensity.  The best advice anyone ever gave me is less is more/ don't be afraid of space/ let it come to you. Kind of one big lesson rolled up altogether

All I can say, and I can speak for nearly everyone I know: it is a fucking miracle that those of us that are still alive made it this far and have lived to fight another day. Pardon my language but there truly is no other word in the English language that will suffice.

I mostly miss all the characters, the old timers, the real deal blues guys and all the craziness that we all experienced together. The situations we all found ourselves in the good and the lousy gigs. The cool clubs and the shithole clubs.  As for the blues music of the past, I miss the simplicity, the grooves, the soul. To me it has become so rock and roll oriented or r&b oriented. It has become all about guitar slingers and less about great songs. My fear is that this trend continues. Also, the gigs and clubs and especially the pay is dwindling and interest in live music in general especially at the club level, seems to be disappearing.                         (Kenny Parker / Photo by Jane Cassisi) 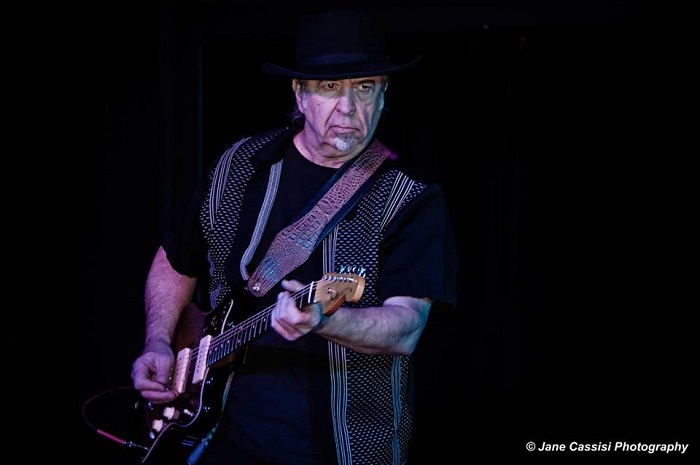 "All I can say is what I’ve always said: that African American culture has driven popular culture for as long as I’ve been around. The blues is at the root of all popular American music like forever."

What touched (emotionally) you from Michigan's blues scene? Which is the most interesting period in local scene?

What touched me the most has been the chance to get to know and play with a number of Detroit’s legendary greats' some of who were one or two degrees of separation from the very root of the original tree of this great music. Son House lived his final years here in Detroit. He is buried here. My friend Little Mac Collins was friends and played with Calvin Frazier who came to Detroit with Robert Johnson, Sippie Wallace, Alberta Adams, my friend Lazy Lester, Lightning Slim. I played for years with The Butler Twins, Johnny "Yard Dog" Jones, Louis "Mr. Bo" Collins, Johnny Bassett, BoBo Jenkins, Preacher Peanut, Baby Pepper Yancy, Beverly Yancy, "Uncle" Jessie White, Jessie who drove Albert King's bus.  Tremendous cats. Ss for the most interesting time, the 50s and 60s must have been pretty great. I wasn't here so I don't know firsthand, the 70s were cool because a lot of great old-time cats were still viable. We often didn't recognize their greatness until later. These players were just here and there at clubs.

Well the blues and rock counterculture were really intertwined in Detroit. A lot of the gigs in the 60s and 70s would have nights where the old-time blues guys played and nights where the rock and rollers played at the same clubs. The real rock and rollers. Not the cover band/bar band scene but the scene of folks playing original music or rock and roll closely related to r&b and blues. It influenced me politically, it was a very liberal sort of scene. Many of the gigs for blues-based rock and rollers and blues cats were in and around Wayne State University, which was an extremely liberal scene. Almost my whole time in Detroit has involved venturing out into little clubs where funky nasty lowdown rock and roll and blues or blues-based music was being played. It encompassed everything for me. I started hanging out in Detroit starting in 1970 which was only three years after the riots. I must say that not once did I feel that inside the clubs where the cats I knew were playing, was there an overt or noticeable feeling of racial tension. the music transcended that in my experience. The musicians were just trying to dig each other. As far as the journeys that I’ve taken, even when I was a teen, on a family vacation, I would be looking for blues records in different towns or cities. My mother's side of the family is from the deep south and when we went south, I would take my guitar. I would look for records. Visit the salvation army of some southern city mainly small towns in rural Georgia or Jacksonville Florida looking for blues records. Ever since I can remember, when I would wake up in the morning some Muddy Waters groove would be in my head. All I can say is what I’ve always said: that African American culture has driven popular culture for as long as I’ve been around. The blues is at the root of all popular American music like forever. There are lots of times where I’ve thought how cool it would be to live in Belgium or the Netherlands because of how laid back those places seem to be but, sooner rather than later I would miss the melting pot that is the USA. The culture, as for music, I have always told people that if it doesn't have an element of African American influence, I don't want to hear it.

I have two places that I would want to go. It would be hard to pick just one. First, when I was eleven, my 6th grade class went to see a high school play's dress rehearsal. the play was carousel. The girl that played Julie Jordan was to my eleven-year-old self the most beautiful girl that I’d ever seen. I was thunderstruck. the very next day, in real life, the girl died. I was crushed and it stayed with me for 50 years. I would love to be able to go back and sit with her on a park bench and just talk to her. The 2nd thing would be to travel back to early 1971 and see the original six Allman Brothers Band again right about at the time that the recorded "Live at Fillmore East". I saw them a couple weeks before they recorded that album, and more than anything in my life, that set me on this path. Those two things: the pain in my soul that when I heard B.B. King's guitar I knew that feeling along with the sheer brilliant musicianship of The ABB sums up the journey of my life.