"My hope for the future of music is that we never forget the roots of where it all came from, and my fear is that new generations will forget!"

The Kentucky Headhunters, declared “the great American rock ‘n’ roll band” by Billboard magazine, began their professional journey in 1968 when brothers Fred and Richard Young and cousins Greg Martin and Anthony Kenney formed the Southern blues-rock band Itchy Brother. The band morphed into The Kentucky Headhunters in 1986. Currently, the band is made up of Richard Young, Fred Young, Greg Martin and Doug Phelps. On January 25, 2003, Rock and Roll Hall of Famer Johnnie Johnson—the man Rolling Stone called “the greatest sideman in rock and roll” for his groundbreaking piano work with Chuck Berry—stepped on stage at Houston, Texas’ Reliant Stadium. He joined his hosts, The Rolling Stones, for a rousing rendition of Honky Tonk Women. After hanging out all night with Keith Richards, Johnson got on a plane and flew to Kentucky. There he reunited with his good friends, Grammy-winning Southern blues-rockers The Kentucky Headhunters (brothers Richard and Fred Young, Greg Martin, Doug Phelps and Anthony Kenney). 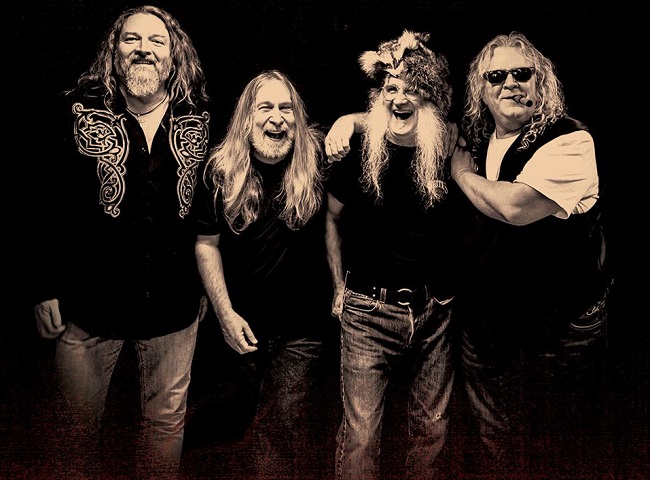 The plan was to have Johnnie lay down some piano for the band’s upcoming release, Soul. But the vibe was too strong and the music too good, so the tapes just kept rolling. With songs and arrangements furiously being created on the spot and everything recorded live as it happened over the course of three days, a magical musical event was underway. After Johnnie’s death in 2005, the tapes, while never forgotten, remained unissued. The performances, which can now be heard on Meet Me In Bluesland (Alligator Records, 2015), found Johnson playing some of the deepest and most rocking blues piano of his legendary career. With The Kentucky Headhunters at their down-home best, the record is a country-fried, blues-infused party from start to finish. The album grooves from the raunchy rock of Stumblin’ to the slide-fueled Superman Blues to the roof-raising version of Little Queenie to the salacious She’s Got To Have It (the last vocal Johnson ever recorded).

Doug: We were all influenced by blues music early on in our lives...each one, from different avenues...I first heard blues music from my Uncle Bill Stephenson. He has loved blues music all his life and played us some of the first blues music I ever heard in my life as a young child. It was a part of the very foundation of my musical experience very early on. But we are all, also, a part of the musical fabric of our surroundings, and I grew up in a time and an area that loved country music, southern gospel music, the British Invasion, and Southern Rock music, so all of these influences were a part of my musical education as I grew up in a small, rural, farming community. And what I learned some years later, is that blues music was an influence on all the music I listened to as I was growing up. And it means that it's at the very foundation of all the music I love! Blues music is an expression of the soul...it makes you feel something way down deep inside!

How do you describe The Kentucky HeadHunters sound and songbook?  What characterizes bands philosophy?

Doug: We are like a musical stew! Each one of us brings our backgrounds and influences to the band and when it's all combined, it makes our music very unique. Yes, there are familiar influences in all that we write and do, but the combination of different influences is what makes it original and unique. Each is equally important, and take away one thing, and you change the sound and the dynamic of the band. That's why we always split everything equally in our writing and our publishing, because no matter who writes what, once it's recorded, and everyone does their thing, that's what makes it a Kentucky HeadHunters song!                     (Photo: Kentucky HeadHunters by Ash Newell) 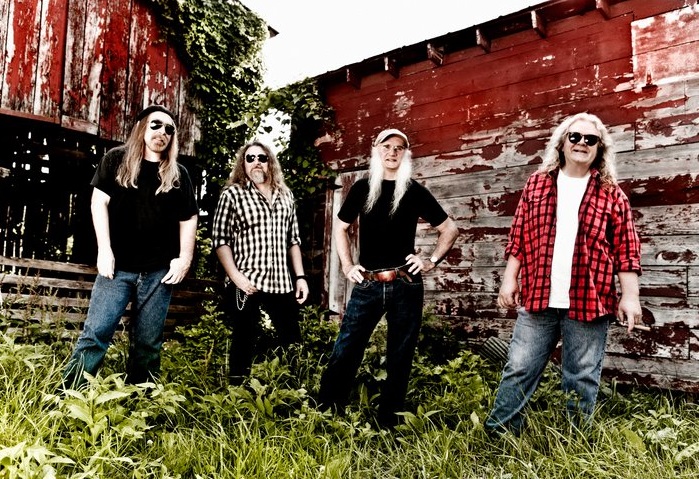 "The lines that connect the legacy of blues with Country/Honky Tonk and continue on to Southern Rock are the people that were in the fields, picking cotton and barely making a living...the blues were a way of life and their way of expressing those emotions were in music."

Are there any memories from gigs, jams, opening acts and studio sessions which you'd like to share with us?

Doug: Yes! We've been very fortunate over the course of our career to share the stage with many wonderfully talented friends such as Hank, Jr, Charlie Daniels, Bob Dylan, ZZ Top, Edgar Winter Band, David Bowie, Lynyrd Skynyrd, Waylon Jennings, Bill Monroe, Jimmy Vaughan, and many others, including getting the opportunity to do a duet with Roy Rogers in the studio! But the top of the list would be the times we played with Johnnie Johnson live, on stage, and in the studio! Johnnie set the groove! He made us play like grown men!! Nothing I've ever experienced in music affected me like when we played music with Johnnie!

Richard: When we cut "Little Queenie" for the record, Johnnie told me it was the 1st time he had recorded the song in the studio, since he and chuck berry cut it in the 50's.

Johnnie played it just like the original...he cautioned me to make sure we had the piano up in the mix...explaining that when he and chuck did the song, he didn't have a mike on the piano...just 1 for chuck's vocal, his amp and the bass guitar... I always wondered how his volume when he went to a solo tripled...he told me "when you ain't got no mike...you gotta pound the hell outta them key's to be heard."

What has made you laugh and what touched you (emotionally) from the late Johnnie Johnson?

Doug: Well, Johnnie loved Kentucky Fried Chicken, as we all do, and he had Richard's son, John Fred and his band mates, the newly formed Black Stone Cherry at that time, (remember, this recording session took place in 2003)...he had those boys running back and forth to Kentucky Fried Chicken, bringing him some chicken and biscuits! haha! But the coolest thing about working with Johnnie in the studio and live, on stage, is that he worked so seamlessly with us! It was like he had played with us all our lives! But that's how good Johnnie really was! He brought us to places, musically, that we had not gone before! And believe me, that was a very emotional experience for us all. 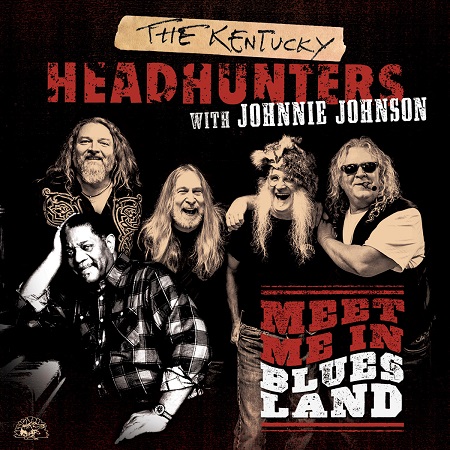 Richard: Johnnie used to listen to the Grand Old Opry...when he lived in Fairmont, West Virginia, as a child. Johnnie got to play on the opry stage with us... he was so thankful...he said "Richard, everytime I’m around you something good happens to me...I wish my mama could know I played on that stage." This is what makes music universal...making people happy. There is a YouTube video (type in Marty Party Kentucky headhunters/Johnnie Johnson.

What do you miss most nowadays from music of the past?  What are your hopes and fears for the future of music?

Doug: What I miss most about music nowadays from music of the past is the realness of the music. You didn't have music that sounded manufactured back in the early days of recording, and you didn't have a hundred and thirty two tracks to play with, you recorded everything live and on the spot! And you recorded it until you got it right! My hope for the future of music is that we never forget the roots of where it all came from, and my fear is that new generations will forget! It's up to us old timers to make sure we educate the up and comers, so that they, too, will experience and include those musical foundations and roots that are so important!

Doug: That all young musicians would go back and listen to and study the roots of all music. To learn where it all came from, to start there, and then start their musical journey. That's what we did when the four of us, Richard, Fred, Greg, and myself, put this band together...we had our influences from our teen years, Elvis, The Beatles, The Rolling Stones, Led Zeppelin, but we wanted to know who they listened to, that made them what they were, and it all came back to the blues and early rock!  Muddy Waters, Sonny Boy Williamson, Howling Wolf, Jimmy Reed, Robert Johnson, Chuck Berry, Little Richard, BB King, Albert King, Freddie King, and so many more! So, that's where we started!  Before we wrote one original line of a song in this band, we listened and learned those songs that influenced and made the bands we liked, who they were! 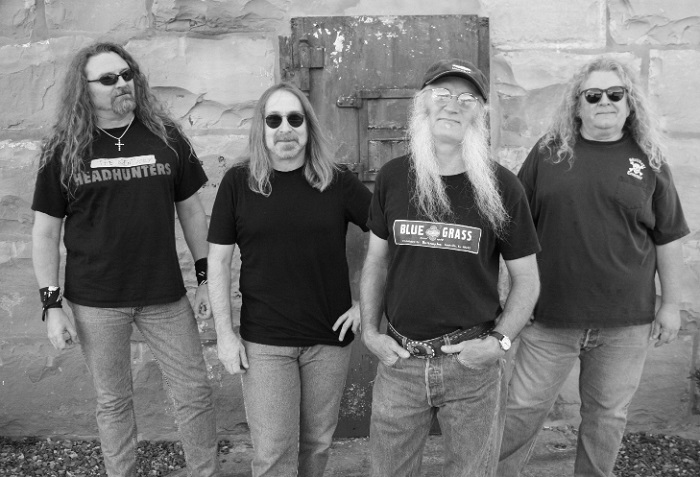 "Blues music is an expression of the soul...it makes you feel something way down deep inside!"

What are the lines that connect the legacy of blues with Country/Honky Tonk and continue to Southern Rock?

Doug: The lines that connect the legacy of blues with Country/Honky Tonk and continue on to Southern Rock are the people that were in the fields, picking cotton and barely making a living...the blues were a way of life and their way of expressing those emotions were in music. The same with bluegrass music. Bill Monroe sang the blues as well, but he did it with mandolin, banjo, and fiddle...that high, lonesome sound was another form of blues. Hank Williams, Sr. sang the blues, but he did it with a country twang. It's all connected from the same feeling inside, but expressed in different musical ways.

Doug: I'd like to go back to here and see Johnnie Johnson recording Johnny B. Goode with Chuck Berry, and then to travel to Chicago to see the first time Muddy Waters and band ever sat in and played at the first club they ended up getting hired and taking someone else’s gig! haha. We got our name, HeadHunters, from Muddy's band nickname back then. They would set in at a club, and end up getting hired there to play, so they called that process, Head Choppin', and thusly, became nicknamed "The HeadHunters"!

Richard: I would have loved to spend some time with Stephen Foster...the great Kentucky songwriter of the 1800's. (My old Kentucky home, Jeannie with the light brown hair, etc.)

I would have loved to have an opportunity to write a song with the band during the big pink era...we were very fortunate to have Levon Danko, Garth and Jim record "Shufflin Back To Memphis" on their "High On The Hog" record. 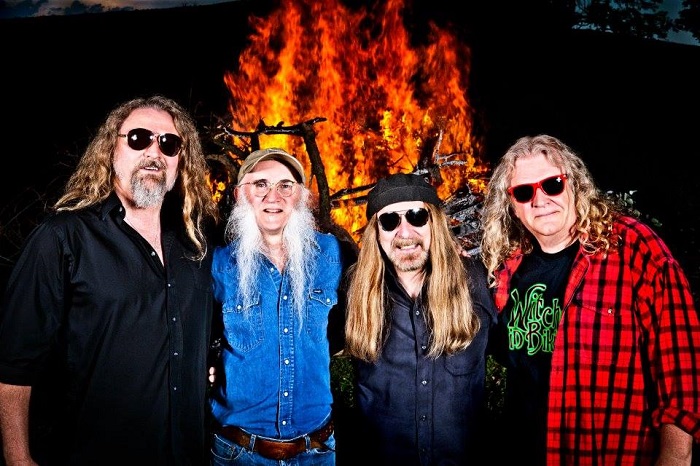