"Blues and Rock music is still the only things that bring people, cultures there is no real racism in the music."

From French blues harmonica player, Marko Balland part in the US in 1985 to play with the most formidable of the planet blues musicians. On returning to Paris he formed his first blues band: "Golden Blues Band" where he skims the shows of France. He played with many bluesmen in Paris also, notably with "Marwa Right" to "Banlieu Bleu!" Having discovered rock through Jimi Hendrix, Marko Balland released a tribute album to this one as the Marko A donf'experience. He participated in several studio sessions for known albums! Participated in the creation of recording studios "Le Chantier" In Montreuil (Paris). Released in late 2010 with a double single featuring the tracks "Pas Touche" and "Le Ciel Va...".                                                Photo by Reynald Reyland Marko Balland's second album "Dentelles Hurlantes" describe the universe and style of French singer. Between harmonica blues and metal, Marko is probably unquestionably harmonica player as his rock generation! The powerful sound of his guitar harmonica very oscillates between Jimi Hendrix and Reeves Gabrels. The lyrics of Boris Bergman (Baschung) make her music a beautiful French signing while keeping the musicality of Rock n 'Roll in France and finally, the Marseilles trio to big rhythm guitar and bass sounds definitely pushes the metal rock sound with the exceptional collaboration of Boris Bergman and Stéphane Avellaneda (Ana Popovic) on the instrument No button. Marko Balland joined the Hat Man Group Session in 2014.

What do you learn about yourself from the Blues and Rock n’ Roll culture? What does the blues mean to you?

It is the same culture, the “Blues" to bring "Rock" and "Rock" comes from the "Blues". It’s a condition of mind, a very deep musical culture. Something that comes from inside oneself when learning to play it and I come a long way since departing my musical culture, was the "Rock n’ Roll"

How do you describe Marko Balland sound and songbook? What characterize your music philosophy?

As said earlier, I’m from the "Rock" culture. My spiritual father is "Jimi Hendrix". You have to play with his heart and my trips. Not wanting to look like someone else. When we hear the raw notes we know it's you. This is important as the work of his instrument…

What were the reasons that you started the Blues and harmonica experiments?

At the age I was guitar player and I played with a harmonica player. I could not hear what I wanted. So I took the harmonica and I realized that I played the notes I wanted. 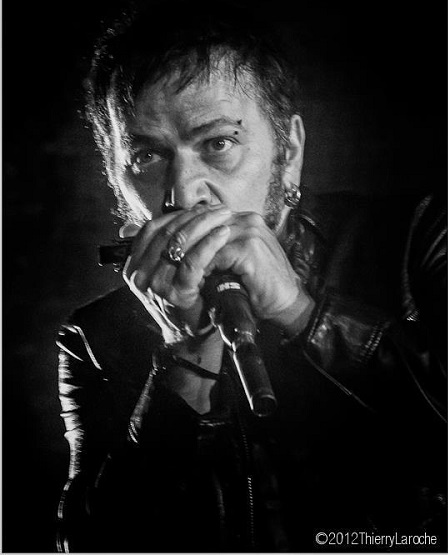 What are the secrets of harmonica?

Work… Rhythm… Worked another or several other instruments for his personal style.

"It is very rare, there are some bluesman who tries to write in French. It's not easy. It does not work too much, we can not be exported." (Photo by Thierry Laroche)

My album "Tribute to Hendrix"…The stage with lots of encounter….a period of my life where I organized in Paris at the "Cave of Oubliettes" of The Badass Session. I discovered full of harmonica players and be able to share the stage every time.

I have not had advice. Just twice, two big slap in my "ego"…To see a French Bluesman "put me bristles" Toots Thielemans on stage. This is enough to become aware of the work for the future.

My meeting with Charlie Musselwhite at SPA Dallas my first year when I was doing seminar sound effects. He was there in the room and he seemed to endorse my work. The meeting with James Cotton table in a dinner at the last wagon of train. I did not speak good English and I cursed myself for not being able to communicate with him and his wife throughout the meal. I met Ben Nasser Dadoo, the singer and guitarist of "Hatman Session" who introduced me to the Blues Roots.

Using all my stuff. In the blues there is not much room for that...my hopes are playing around the world with my harmonica. Fewer idiots in our world. Have more tolerance in this world and fears that the humanities are becoming more and more crazy.         (Photo by Reynald Reyland / Marko & Ben Nasser Dadoo) 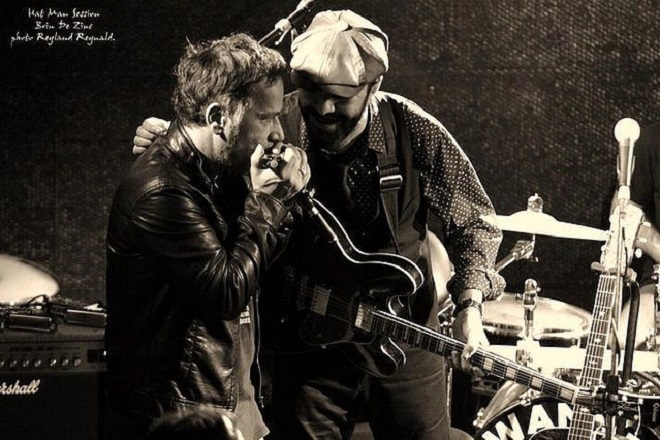 "It is the same culture, the Blues to bring Rock and Rock comes from the Blues. It’s a condition of mind, a very deep musical culture. Something that comes from inside oneself when learning to play it and I come a long way since departing my musical culture, was the Rock n’ Roll"

How difficult is to write and play the Blues in French language?

It is very rare, there are some bluesman who tries to write in French. It's not easy. It does not work too much, we can not be exported.

If you could change one thing in the local blues/rock scene what would that be? Where would you really wanna go with a time machine?

I do not have the power to do it, so I do not think to change something…

What has made you laugh from your trip in US and what touched (emotionally) you from the local blues circuits?

Which make them laugh in the US are the mentalities. What is good is the easy encounters with great musicians.

What is the impact of Blues n’ Rock music and culture to the racial, political and socio-cultural implications?

It is still the only things that bring people, cultures there is no real racism in the music. Except maybe between music styles.