Q&A with Greek blues/rock guitarist Sakis Dovolis - delivers and is guaranteed to rock your good jam:house

"Having in mind the fact that the Blues is actually a folk music genre, it was more than certain that it would affect some aspects of life and culture, in general. To me, Blues music managed to extirpate some ideas, some ingrained behaviours that the world had back in the day."

"Cross The Line" by New York-based Grooveyard Records (2018) is an outstanding debut studio album by the awesome blues/rock guitarist Sakis Dovolis from Greece. Includes 11 songs of excellent, world-class, blues-based, soul-powered, heavy guitar rock power trio music that delivers and is guaranteed to rock your good jam:house down to the solid ground. Sakis Dovolis is an exciting, young talented blues/rock axeslinger who kicks serious authentic six string ass from start to finish on the amazing "Cross The Line" disc. Brother Sakis is a legit new "guitar hero" who lands with deep inspiration & passion on the instrument, a true bonafide axeripper supreme who plays with style, class and soul. Completing the Sakis Dovolis Trio line-up is the amazing rhythm section of Fotis Dovolis on bass and Nick Kalivas on drums, both excellent talented musicians who lock in and nail down the SDT groove with power, strength and excellence. 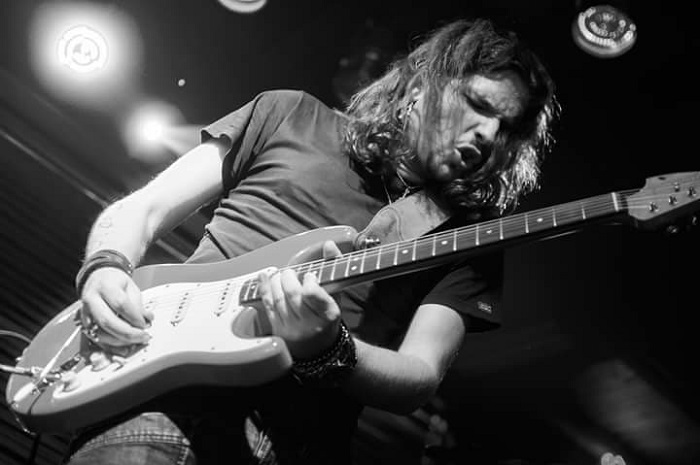 Both genres, but especially the Blues, are speaking the language of truth. Truth in every level, no matter how difficult can this be, at some point. So, the Blues showed me that simplicity has the amazing power of ripping you off of all the "wrapping" if you will, and leaves you with nothing but the truth. And you gotta face the truth, deal with it, no matter if it's good or bad.

At the moment, the best way to describe our music is Blues Based Heavy Guitar Rock music! It's kinda big but I cannot think of a better "title". And I'm saying "at the moment" because I don't really know how things will be in a few years from now. I don't like to use strict, standard labels for my music. The one thing that's a fact, is that it will always be "Blues based". I'm searching for inspiration pretty much everywhere in my life. The energy and the creativity usually coming from listening to the masters that inspired me in the first place. A fun fact is that lately, I like to observe people in the audience and see their reactions during the show, how they respond to what I am giving to them. And this makes me automatically a better musician, performer etc. I find this whole thing really creative! Works for me just fine! 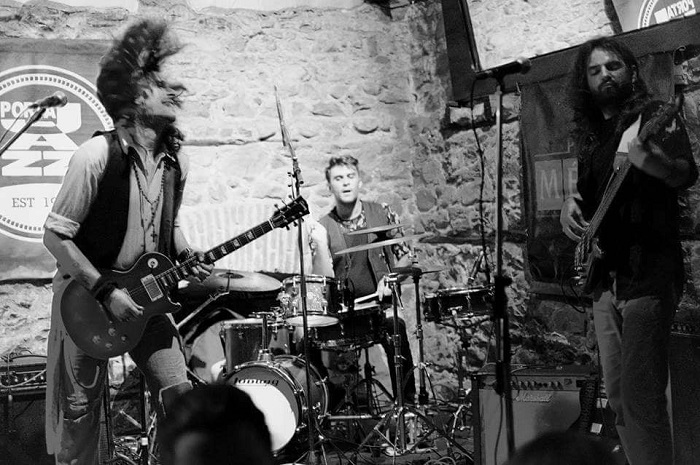 "In my whole life, Stevie was there with me. It's more than a fact, that Stevie made me who I am today, and not only in musical terms. And as far as I know, Stevie was a great human being. So, spending a whole day with SRV, talking, jamming etc, would be the best day ever!"

Well, the most important thing in my musical life happened on May 2018, when I've signed with the American Label, "Grooveyard Records NY". It is a huge step for me, a big deal, because through that, I have the opportunity to share my music worldwide and help the Blues to stay alive and kickin'. At this point, I want to thank the head of my label, Mr. Joe Romagnola, who believed in me, supported me and gave me this chance! He's like a "Musical Father" to me. Also, big thank you to my brother Stavros Papadopoulos, a multi - talented musician, for suggesting me to Joe and co producing and engineering our album. I can think of two advices that I always keep in mind. The first one came from Louisiana Red who said and I quote: "Son, you know you got a star. But this is not enough. You gotta keep on tryin' and tryin' hard every single day". And the second one came from Joe Rogmanola during the recordings: "Do not overthink anything. Just let it go from your heart to your fingertips!".

The past five years, I am almost constantly on the road. I think I can highlight our show at Suwalki Blues Festival in Poland, which was a great experience for me and the boys. The show in Berlin, Germany was also a big thing for us. Of course, I will never forget the day I met and jammed with Louisiana Red. Life changing!! And last but not least, the studio session we had for the recording of SD Trio's album. I remember I was so excited and anxious at the same time! Bottom line, it came out good and I think we did the best we could back in the day. I'm looking forward to the next one!

As the years go passing by, the originality of the Blues is kinda fading out. I know that this is the natural flow, everything's moving forward, but I think I miss the pureness of Son House's music, or the authenticity of Muddy Waters or Howlin' Wolf. So, my biggest fear is the fundamentals of the Blues to be forgotten and my biggest hope is not to be! And that's a "mission" we, Blues musicians, have. We must try to keep the Blues alive and pass it on, to the next generation! And so, it goes on and on! 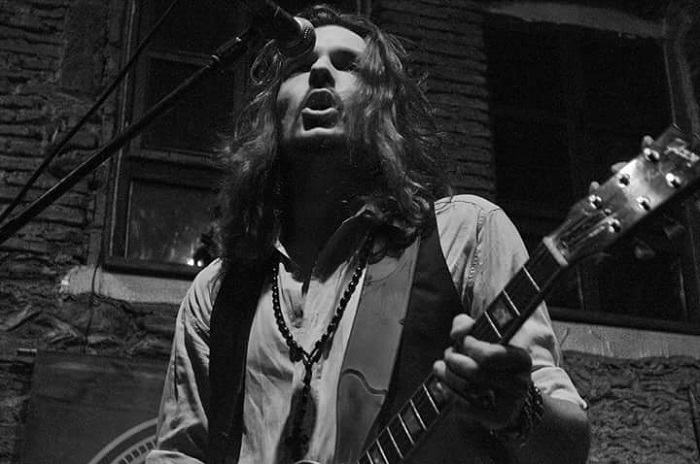 "At the moment, the best way to describe our music is Blues Based Heavy Guitar Rock music! It's kinda big but I cannot think of a better "title". And I'm saying "at the moment" because I don't really know how things will be in a few years from now. I don't like to use strict, standard labels for my music."

If you could change one thing in the local scene and it would become a reality, what would that be?

I think, the one thing I would change is, somehow, people to support the local bands. We have so many great bands and individual musicians in Greece. People must give them a chance! I know, because I've been there, that they're trying so hard, in order to get noticed and exposed to the, unfortunately small, Greek Blues audience. I also know, that people's love and support is what an artist needs in order to keep on going. I am trying to do that, with younger fellow musicians, when I have the chance!

What are some of the most important lessons you have learned from your paths in local blues scene?

You know, being a Blues musician in Greece, its same thing like you're trying to survive alone in the desert! The audience is small, venues are less than a few, people are not familiar with this genre, so you realize that you should not have high hopes and expectations. But that's sad. So, there's a two way street right here! The first one, is to give it all up, and do something else. The second one, and that's the hard part, is to keep trying and, eventually, change the way that things working in GR. Regarding this, I consider myself really lucky, because I had the privilege to be close friends with my "Greek Guitar Heroes", Elias Zaikos (BluesWire) and Nick Dounoussis (Nick & the Backbone). Those guys showed me how it's done! Don't wanna get into details now. I just wanna say that every musician in this country must check them and their history out!

Having in mind the fact that the Blues is actually a folk music genre, it was more than certain that it would affect some aspects of life and culture, in general. To me, Blues music managed to extirpate some ideas, some ingrained behaviours that the world had back in the day. Humanity owes that to all the "Blues" people that suffered, in order to root out those horrible old habits. If we wanna get rid of this whole racism thing, we should all teach to our kids the Blues History. We can go on and on talking about this, but to sum up, Blues is a cultural heritage, for which the whole world should be proud of.

I can think of many things now, but the answer that comes to me instantly, is to go back in the day and meet my biggest influence, Mr. Stevie Ray Vaughan. You see, Stevie died when I was 2 years old. The only way for me getting to know him, was through his albums, biography, books and later via Internet. But somehow, I feel like I know him very well. In my whole life, Stevie was there with me. It's more than a fact, that Stevie made me who I am today, and not only in musical terms. And as far as I know, Stevie was a great human being. So, spending a whole day with SRV, talking, jamming etc, would be the best day ever! 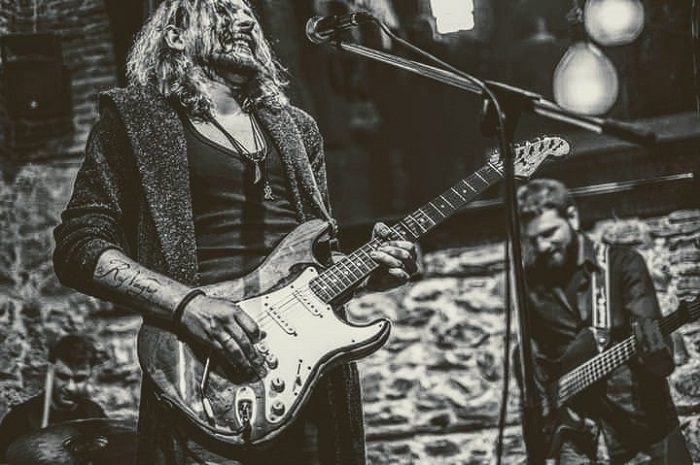