"Music has a very special way to get directly in peoples’ hearts. In the racial, political and social areas though, there is still much work to be done, that goes over the impact that music can have on our lives."

Eva Atmatzidou: No Limits, One Music

Eva Atmatzidou was born and raised in Giannitsa, a small town in the North of Greece. She has studied Music and Psychology. She writes and sings her own songs, performs as songwriter, musician and also teaches. In 2013 she started composing for solo guitar also. Since 2006 she lives in Athens. At the age of 7 she began studying the piano. Five years later she started studying classical guitar, along with the basic theoretical studies at the local conservatory of her birth town. In 1997 she continued her studies in Classical Guitar, Harmony and Counterpoint in Thessaloniki, having realized that she would deal more seriously with music. In 2003 she completes her Classical Guitar Degree under the supervision of her teacher Loucia Samourkas. She has attended various classical guitar masterclasses with R. Aussel, R. Dyens and others. She has also attended jazz guitar improvisation classes, as well as Modern Harmony, History of Art, modern singing classes and Jypsy Jazz masterclasses. Furthermore she plays the bouzouki and the mandolin. In 1999 she gets accepted as a student at the Department of Psychology of Aristotle University of Thessaloniki. Her special interest is in Educational and Developmental Psychology. After receiving her Degree in Psychology, she has attended specialized education on Learning Disabilities and on Counseling Children, Parents and Teachers. Her first song was written by the age of 10. She composed just music on her father's lyrics. The next few songs were also written on her father's lyrics. By the age of 17 she writes both music and lyrics for her songs. In 2006, when her studies on Psychology and Music were completed in Thessaloniki, she had already gathered enough songs and moved to Athens seeking for more musical experiences and a place to publish her songs. 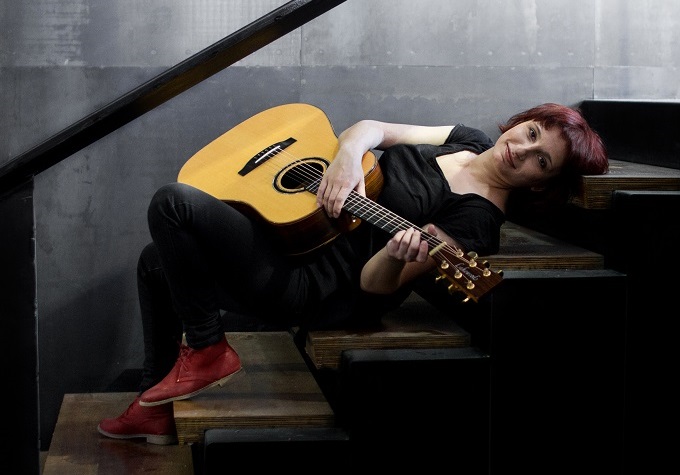 In 2010 her first comprehensive work was published, a CD named “Mataio Roz” with eleven songs, all composed, orchestrated and sung by her, except two of her songs that were sung by the Greek singer Lizeta Kalimeri. As a song writer, all these years, she plays her songs on stage either on her own concerts or playing with other artists. Eva started performing as a classical and acoustic guitarist at the age of 17, participating in various bands that were mainly playing Greek music and “rembetika”. Since 2006, when she moved in Athens, she has met and collaborated with many Greek artists, touring around Greece and abroad in live concerts, playing the guitar, the bouzouki, the mandolin and singing. She has also been recording as a musician for other artists' cd's (Alexiou, Lidakis and others). In February 2013 Eva presents her first composition for solo guitar, named Rondat, combining the philosophy of fingerstyle playing and classical guitar with the technique of picking and the sound of acoustic guitar. In September 2014 her second composition for solo acoustic guitar, named “Tsouka Rossa”, was released on her youtube channel. It is a composition based on a Greek traditional mode named "nikriz‟, dissected through different styles, rhythms and techniques. “Tsouka Rossa” was featured at the American record label Candyrat Records youtube channel, as a guest artist's video. Her debut solo guitar album, "TRENOVA" has been released on May 2016 through Candyrat Records! It includes 8 original compositions for solo acoustic and 12string guitar. She compines different techniques, idioms and the pure acoustic sound with some effects.

How has the music -and especial of Jazz/World- influenced your views of the world and the journeys you’ve taken?

World music makes me feel how “small” and - at the same time- how important we are in this pluralistic cultural mosaic. Each one of us is like a color in a picture. The picture needs us to exist and we need the picture to make sense. Differences are wanted, interesting and refreshing, all in harmony and finally all in one. For me, this is not just a view of music. It is a guide for our world to get better.

How do you describe Eva Atmatzidou sound and songbook?

The reason I started composing music without words was to avoid limits of language and to feel really free to express myself musically in any way I might need to. This freedom is like a present that I made to myself and this is exactly what I enjoy when I am composing. I prefer letting other people characterize my music, if they want to. Sometimes, they say things I wouldn’t even imagine. 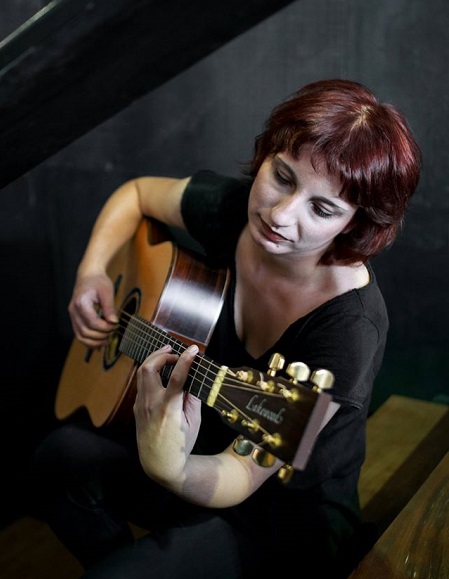 I am trying to be creative, personal and respectful.

What were the reasons that you started the fingerpicking style researches and acoustic guitar experiments?

I play the guitar mostly with a hybrid kind of technique that combines the pick with the use of fingers. My basic studies are on classical guitar. This means that to me guitar was from the beginning a polyphonic instrument that can play more than one voice at the same time. On the other hand, I was playing acoustic guitar with a pick in different kinds of music with bands. As the years passed, I felt that I liked more the sound of acoustic guitar, but I still wanted to listen to the guitar as a polyphonic instrument, not only solo or only chords. So I kept the pick and all the techniques I have learned on acoustic and added my fingers and my “classical” way of thinking to add extra voices. This opened a totally different view of the guitar. I started thinking of the guitar as a “band” and I added percussive elements, other instruments’ techniques, some effects and I am still exploring!

My father, who was the first composer I ever knew and got me so close to music creation since I was a child, my classical guitar teacher Loucia Samourka that helped me understand many things about sound, expression and hard work on music and also Roland Dyens that was the first classical guitarist and composer that show me that you can “break the rules” on guitar and be really free, imaginative and modern.

To take care, but not to be afraid.

The music of the past is a timeless treasure. I listen to this music and I have studied many kinds of music that were composed in the past. But for me life goes on and so does music. I cannot say that I miss something. Whatever was created then it still exists and it is available to us to feel it, share it and also to affect us.  We live in a different world and music expresses a different reality. Somewhere I saw written: “Support living artists”. I agree!

I will tell you 3 words that describe simultaneously my hopes and fears:  Peace, Justice, Human rights.

I would turn “perfect productions” closer to the real human musical playing and feeling. 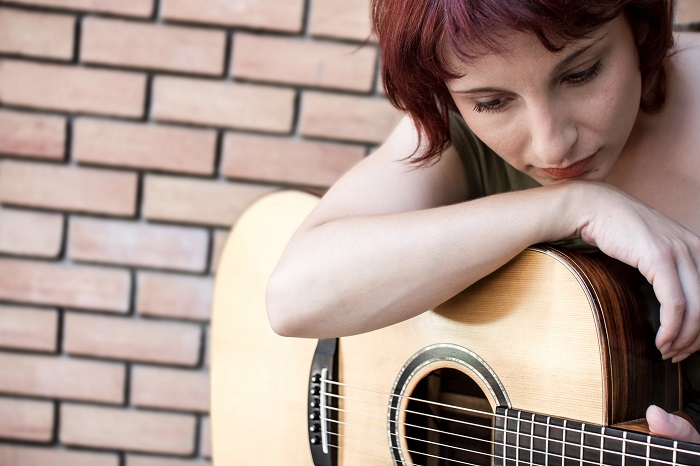 "The music of the past is a timeless treasure. I listen to this music and I have studied many kinds of music that were composed in the past. But for me life goes on and so does music. I cannot say that I miss something. Whatever was created then it still exists and it is available to us to feel it, share it and also to affect us." (Photo by Eleftheria Anthi)

Make an account of the case of music in Greece. What touched (emotionally) you from the local music circuits?

Greece has always been a place where different music idioms meet each other, from East to West, old and contemporary styles. I have played many years as a musician our local music, I have composed and released Greek songs and generally I love Greek music. The way things work in Greece though, disappointed me a few years ago and made me feel that I wanted to take some time off this music scene. This helped a lot my work on composing for solo guitar. I really focused on it and discovered a whole new world of expression, with no borders. Greek people are supportive of what I am doing now. These are not the local music circuits of course –at least for the moment-, but to me it is very important that my country makes me happy, with the way many Greek people feel about what I do.

I will refer to a Greek expression that says “if you are not looking at where you want to go, you will go where you are looking at”. To me this means that if I think of myself mostly as a woman and less as a musician that’s how other musicians` will feel about me and probably they will be right. So, I just try to stay focused on the music. Being a female artist in “a man’s world” is just a different point of view, a different feeling and color in music. Regarding that the level of the women musicians is very high, especially in some instruments and kinds of music I think that what we really play matters and not the sex of the musician.

What is the impact of music and especial of Jazz/World to the racial, political and socio-cultural implications?

As I said before, for me music –and especially World music- is a wide common ground for each person to express himself and be respected. I believe that music has influenced many people through the years in a very positive and comprehensive way, as, if you like something, you like it beyond any kind of discriminations. Music has a very special way to get directly in peoples’ hearts. In the racial, political and social areas though, there is still much work to be done, that goes over the impact that music can have on our lives.

In my childhood, for sure! Back to innocence that changes the sense of time! 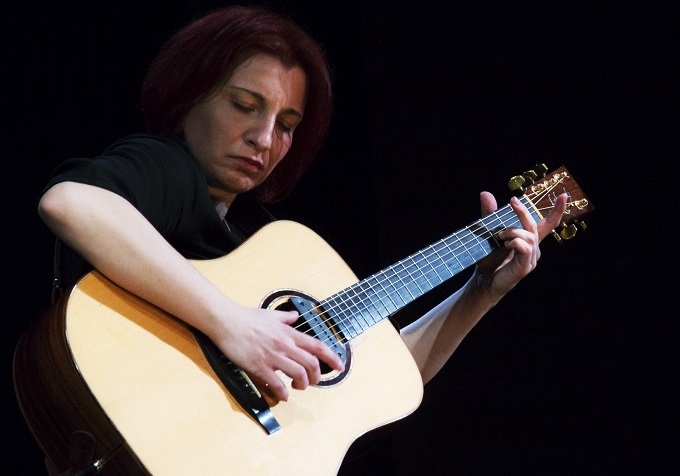