"Both literature and music are the indicator of the cultural level of a society. They participate, decisively enough, in the process of interaction between politics, society and culture. In addition, the members of a group are united emotionally and communicate more easily."

Greek composer and musician George Stefanakis born at village Latsida in Crete. Studies 1967-1973 harmony at national conservatory of Athens with the teacher harmony Micelle Vourtsi orchestration and maestro with the teacher Vasili Vasiliadi jazz harmony with the teacher Marcos Alexiou. 1974-79 studies harmony superior and harmony Atonal in UMIP music school in Paris, with teacher the creator of music ΑΤΟΝΑΛ Julien FALK, (Teacher at the Paris National Academy of Music (CNSMP), and the same period musicology at University Paris 8 (Vincennes). Attribute Composer / Social action: 1. Chairman of board of directors of Music Recording Artists Cooperative (1982-85) 2. Member of the Committee for organising cultural events in Athens (Cultural capital of Europe, 1985, invited by Melina Merkouri) 3. Member of board of directors in the composers’ council of Greece (1984-87) 4. Member of rock group PELOMA BOKIOU (1970-72). How has the Rock, Blues n’ Jazz music influenced your views of the world and the journeys you’ve taken?

George: The beginning of my musical journey took place in 1970, by my participation in the bands with a Hammond. In these bands we were playing Rock music with Blues and Jazz elements. These kinds of music influenced my views about the world and my musical route. First, Rock music gave me a sense of truth, second, jazz music gave me a sense of freedom and third, Blues music actuated in me deep feelings of compassion. In addition to these influences, there was the variety of Greek musical forms within me. All these above, in combination with my studies on classical harmony, have formed my musical identity that is being expressed without thinking. In the synthesis of my songs, I always follow the feelings that the verse causes to me. For example, as I was composing J. Krishnamurti's poem "Ah, the symphony of that song", I was led to Blues, because the feeling I wanted to express had dictated to me this kind.

How do you describe your sound and songbook? What characterize your music philosophy and mission?

George: The sound of my songs is based on a combination of rock and classical music, without excluding other musical forms. However, what is important is the projection of the verse, as I always seek to compose lyrics with philosophical content. So, about the poems that I have set in music, I can say that their sound may refer to the kinds I mentioned above, but the poem has the decisive role in the result. That's why my musical journey is very special, because its purpose is the emergence of philosophy issues. For example, you can hear (YouTube) another J. Krishnamurti's poem that I have set in music, “The Master  Singer of Life”.

What were the reasons that made the 60s to be the center of spiritual and artistic researches and experiments?

George: After the end of the world wars, while one would expect the road to global recession and peace to be opened, there were war zones in various parts of the world (Korea, Vietnam, the so-called cold war between America and former Soviet Union) and armaments with nuclear weapons of mass destruction. Under the fear of a third world war, intellectuals, artists, and especially young people were looking for ways to express their opposition to the wars. Some deeper thinkers have tried to show why man falls into the conflict trap. This, of course, has not stopped until today. Unfortunately, the man has made a progress in the field of technical intelligence, but he has not made significant steps in the field of human intelligence. 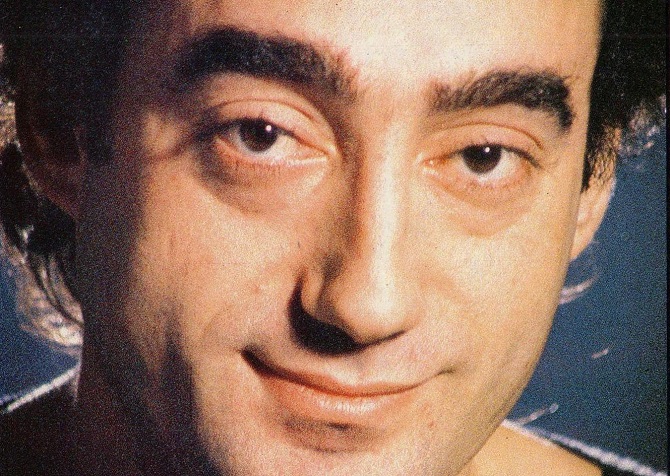 "I would seek to stop every sort of conflict between people. This, however unlikely, could be achieved through self-knowledge. Through self-awareness the understanding will come. The mind will be free from the ego dominance, because this is the cause of every conflict."

What has been the relationship: music and poetry in your life? What touched (emotionally) you from Krishnamurti?

George: From a very young age I had two goals in my life, first to know the music in depth and secondly to acquire self-knowledge. About music, the knowledge came from the many teachers I had. I distinguish two, Michael Vourtsi and Zylien Falk. About my self-knowledge, I searched it in books of many well-known psychologists and philosophers, but inside me there was vacuum. However, all my questions were answered by reading J. Krishnamurti's philosophy. I did not know the existence of his poems until 2002, when I was suggested to set them in music. There I found the whole J. Krishnamurti's philosophy, which expresses me completely, while it reflects the philosophy of many ancient Greek philosophers. The truth of the poems have touched my musical sensitivities, gave me amazing energy and has pushed me to give full attention to set them in music. Setting them in music is my lifework, because here the music is joined with self-knowledge. I hope to convey their serious meanings through my music easily.

Some of these poems are already in circulation by cdbaby, while others are on their way to be produced.

Which acquaintances have been the most important experiences? Are there any memories from gigs and studio sessions which you’d like to share with us?

George: In Greece two well-known guitarists have expressed wonderfully the blues-rock and jazz music, Yannis Spathas and Lakis Zois, respectively. Both could have made an international career. I remember them giving high importance to details. It was a great honor for me to co-operate with them, in the studio or live. Listen now an incident from a concert: As soon as we had finished a concert in Corinth, we went into the car to leave. Then, some fans of the band picked up the car in the air.

George: It is known that in the 1970s there was a total bloom of music. All kinds of music co-existed, each possessing its own space. The absence of this coexistence in the late 1970s, when record companies had adopted the star system in order to increase their profits, caused a great blow to the music itself and to me personally a big gap. From 1980 until nowadays that the financial crisis have broken up the record companies in Greece, we experienced the phenomenon of someone to sing different kinds of songs (rebetiko, latin, insularity, dubbed erotic French songs) in order to be accepted by the star system and serve personal interests through the profitability of the companies. That's what I would like to be avoided in the future. On the world market, we see some kinds of art, which appeal a little people, to have been marginalized, although from these kinds are emerging new creations that are important for evolution. In Greece of ten million, this is absolutely devastating for artists, because they appeal to a small audience. That is why many new artists abandon art for surviving. I hope that the saturation from the short and ephemeral songs will come soon and people will look for the quality music, which does not give a temporary pleasure, but leads the soul into superior spheres. Photo: Peloma Bokiou, c.70s 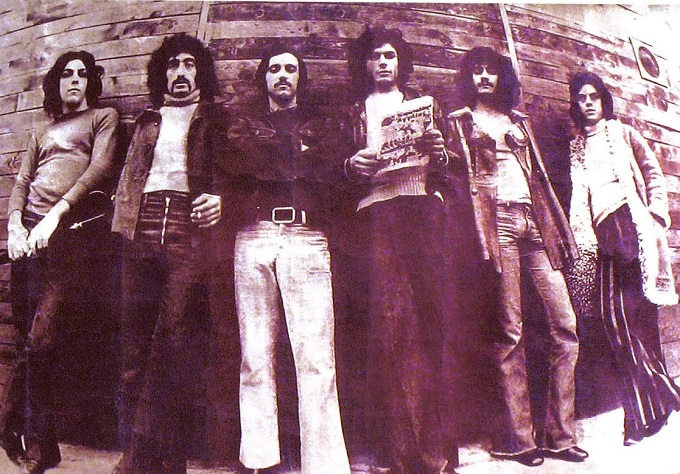 "First, Rock music gave me a sense of truth, second, jazz music gave me a sense of freedom and third, Blues music actuated in me deep feelings of compassion. In addition to these influences, there was the variety of Greek musical forms within me. All these above, in combination with my studies on classical harmony, have formed my musical identity that is being expressed without thinking."

George: I would seek to stop every sort of conflict between people. This, however unlikely, could be achieved through self-knowledge. Through self-awareness the understanding will come. The mind will be free from the ego dominance, because this is the cause of every conflict.

Make an account of the case of Rock Jazz Blues in Greece. Which is the most interesting period in local scene?

George: I think the most interesting period for rock music in Greece is between 1970-75 with the Greek bands SOCRATES, PELOMA BOKIOU, EXADAKTYLOS and for Jazz between 1975-80 with Lakis Zoi's trio and sextet. Later with the band SPHINX, in which Lakis Zois has participated as a member and as a composer too.

What is the impact of literature and Rock music and culture on the racial, political and socio-cultural implications?

George: Both literature and music are the indicator of the cultural level of a society. They participate, decisively enough, in the process of interaction between politics, society and culture. In addition, the members of a group are united emotionally and communicate more easily.

In this social climate, social and artistic fermentations are induced, through which different ideologies and contradictions are expressed. Rock, for example, was the voice of a social protest, it was an inspiration for social struggles, but also a cause for breaking some parts of society with the conventional reality. We have seen this as a culmination because of the war in Vietnam and as manifestation in France in May '68.

George: Basically we are constantly present, but for the sake of the interview I would like to be at Woodstock. By the way, I would suggest, if possible, such a festival to be held every year in a different place at a time, so everyone could watch it. 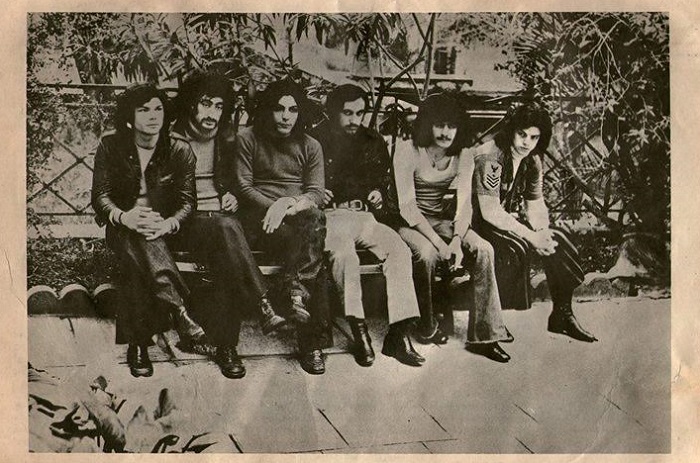