Q&A with guitarist Jeremy Edge, his debut project departure stylistically with more blues and rock based

"As far as Society and Culture with Rock, Blues and related styles I think the past provides perspective. You had the blues originating from the south, out of human suffering, poverty and oppression and it almost became a language that spread because it resonated with anyone who ever felt pain like that. Or any pain at all for that matter."

Pennsylvania-based former Candlelight Red guitarist Jeremy Edge signed with Deko Entertainment for his new project, the Jeremy Edge Project, which will be releasing its self-titled debut on August 28th – available for streaming and download, as well as all major online outlets on CD and Limited Edition Vinyl. Deko Entertainment president Bruce Pucciarello states, "Smoothest axe and a complex rediscovery of the bluesy genre that serves as the foundation of all rock. Jeremy is here to let us know how we are going to drive that car in 2020. Top down, radio playing the perfect tune. Crank it up baby…here he goes..." After 4 top 50 Active Rock singles with CLR, he is breaking a long hiatus by releasing an album that is a departure stylistically with more blues based, guitar based rock. According to Edge, this project has been brewing for a while and came by accident as personnel changes mid-recording session prompted him to make some tough choices about moving forward and finishing the record as a solo artist. 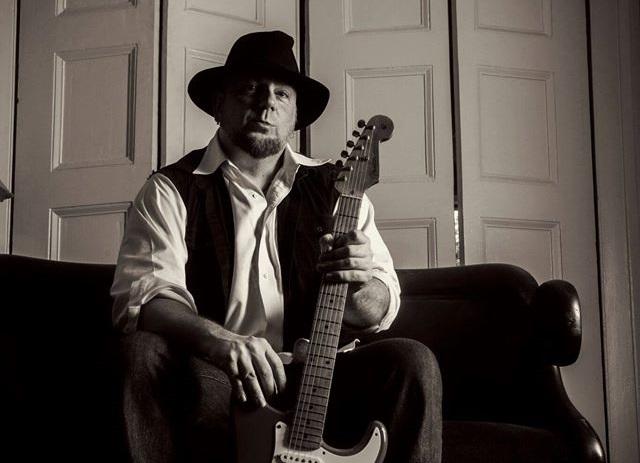 To get the album over the finish line, he decided to do some of the vocals himself for the first time, and enlisted the help of friends to complete the vocal compositions as well as adding more new players to contribute to the project. The album features 9 tracks - varying from bluesy and soulful ballads to in your face rock grooves with blazing guitar. This album was recorded and mixed by Grammy nominated engineer Mike Feretti in Ringwood, NJ - who has also worked with him in the past with Candlelight Red.Jeremy enlisted the help of some fellow musicians for this project - Brandon Yeagley from Crobot and Brett Hestla from Dark New Day / Virgos Merlot both sing lead vocals on three tracks, leaving the rest to Edge. Also appearing on guitar is legendary blues guitarist Josh Smith who does dueling solos with Jeremy on the track "Lies." Bassist John Delowery, drummer Dave Shaffer, and keyboardist Jeremy Baum on Hammond B3 organ round out the instrumentation.

I think where my view lies is in that I don't always think of music as "counterculture". I think my travels as a musician have taught me that music is the thing that binds us all whether we are in Lincoln Nebraska or Downtown LA. I think that traveling and playing music in general since age 19: all of that has influenced my world view. I feel that traditions, clothing, food, architecture, traffic, all of those things are different, however people everywhere have more in common than they would ever imagine, and music is really a big indicator of that. People nod their heads to the same part of the song everywhere. Music is in our DNA.

I think my sound is the result of a long journey of absorbing influences like a sponge. My dad was a musician, who wrote songs for Gene Vincent and my older sisters introduced me to late 60s and 70s rock when I was a kid and that made some firm foundations. My family had me listen to everything under the sun and although some of the stuff I did not get, I get it all now. I kinda take that foundation and keep what I like from other styles, modern and old and try to create something interesting.

I like mixing styles together to get something unique. On this album there is a middle eastern sounding tune called "Indifferent" but it's a waltz, which is in threes like a shuffle. I made the bars and chord progressions change similar to the 12 bar blues format. I like taking something old and do it in a new way, or something new and apply old ideas to it. And when it came time to do the solo, I felt like trying to channel Ritchie Blackmore and just playing as relaxed and behind the beat as I could. I have longed to do a traditional blues record or an indulgent guitar record, but I always come back to having to have songs and having to have these clashes of styles to make it artistic and more "out there”. 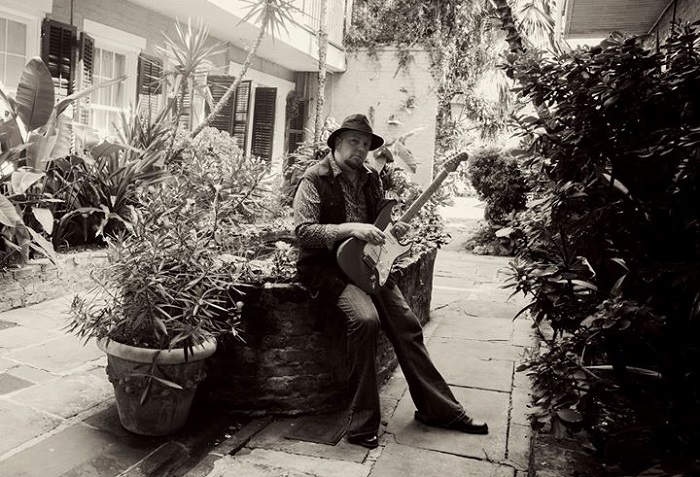 "I miss the authenticity. I miss the imperfections. Spontaneity? I miss drum tones with room mics! The other night, my bass player: John Delowery and I just watched an entire Marcus King show online from the Peace Center in Greenville S.C and I think we both came away saying, if this is the future of music then it is in very good hands!" (Jeremy Edge / Photo by Veronica Clarke)

When I was about 20 or so, I got to open up for Lynyrd Skynyrd and Bad Company in one of my first bands. First really big show I ever played on. It was a festival show and there were thousands even as we started. I think that really hooked me. I remember being pretty scared lol! We got to meet The guys from Bad Company which at the time included Brian Howe. They were so nice and personable, and talked to us all day. It was just such an amazing experience. I look back now and think, that was just so lucky ya know?

Nowadays being able to play music in front of anyone is a privilege. I wouldn't take for granted playing for anyone no matter how small the crowd. Some of my funnest nights on the guitar were on those nights where it was an off day and just a few friends are there hanging and listening.

I miss the authenticity. I miss the imperfections. Spontaneity? I miss drum tones with room mics! The other night, my bass player: John Delowery and I just watched an entire Marcus King show online from the Peace Center in Greenville S.C and I think we both came away saying, if this is the future of music then it is in very good hands! That guy is just amazing, and his band is definitely doing chess while others are doing checkers for sure. A small world thing: his guitar teacher: Steve Watson was also my teacher when I was around 17. I grew up there.

But yeah, not to get too far off topic... there are some great new artists out there and I'm optimistic. I think there is more great new music than ever. I think what scares me is a lack of infrastructure to support artists being able to do what they love and get the music out to people. I think we need to bring back the patience and attention span to get lost in an album. Turn off the world and escape for awhile. 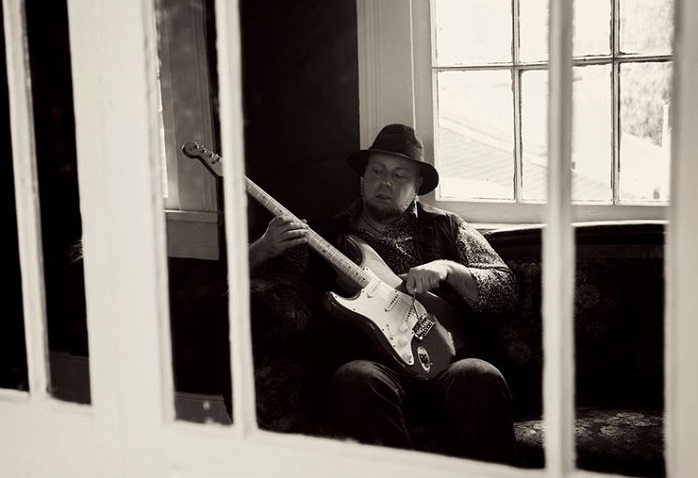 "Nowadays being able to play music in front of anyone is a privilege. I wouldn't take for granted playing for anyone no matter how small the crowd. Some of my funnest nights on the guitar were on those nights where it was an off day and just a few friends are there hanging and listening." (Jeremy Edge / Photo by Veronica Clarke)

How do you describe and what characterize your debut album The Jeremy Edge Project?

I always liked what Santana did years ago with using different singers and I love collaboration projects like ‘Postmodern Jukebox,’ so this was a fun an exciting idea for an album. I have for years wanted to do something that puts me back in touch with my early influences, growing up and learning guitar - SRV, Hendrix, Billy Gibbons, Blackmore, Iommi, Page etc. But I did not want to do a retro album per se. I wanted this to be a melting pot of influences so there is some classic rock, blues, classic metal, and alternative. It's all there - along with Brandon and Brett bringing their unique vocals styles. I wanted to do a heavy, slow blues in the vain of "Tea for One" by Zeppelin. Not exactly like that but a similar vibe to it. I wanted it to have the extended, bar room, blues jam type of feel and capture that on record. This song needed 2 guitars to do that!.

What would you say characterizes Pennsylvania's blues rock scene in comparison to other US local circuits?

I have found that in PA, there seems to be a lot of enthusiastic music lovers in the small rural towns. I'm a sucker for "That bar in the middle of nowhere" lol. I find that tends to be true all over the place and PA is no exception. PA is such a big state it is hard to define a "Scene" in my opinion. It's very diverse.

I think to never chase trends or success. Over the years I played in lots of situations where the goalpost was getting something that radio stations and rock audiences will embrace and I made a lot of compromises and took a lot of detours. Now, I am kinda just playing what I want and the freedom of that is, well if people like it that is great but if folks are not into it at least I am experiencing great happiness doing it. I feel like I am rediscovering the guitar all over again. 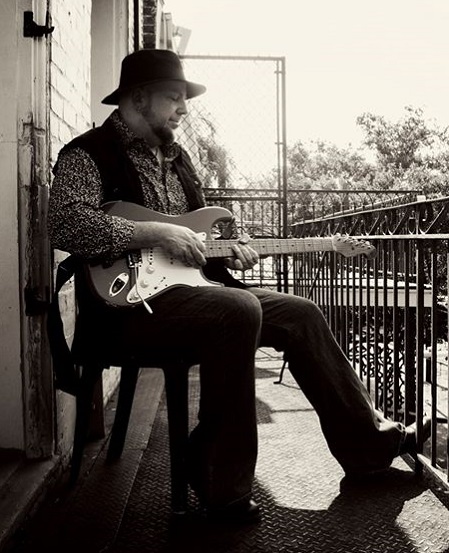 So, if I may, I would answer the second question first?

I think that I want people to relate to the music on a personal level.  Whether it's a riff that gets them or a lyrical thing, you want it to resonate ya know?

As far as Society and Culture with Rock, Blues and related styles I think the past provides perspective. You had the blues originating from the south, out of human suffering, poverty and oppression and it almost became a language that spread because it resonated with anyone who ever felt pain like that. Or any pain at all for that matter. People heard it and could instantly relate. The blues spawned 60s & 70s rock, but people like Sam Cooke and Little Richard, those guys back in those times, they used music to bring people together.  Music has always been a thing of healing or therapy and it can do that on a deep personal level or a societal one. I think during tense and stressful times like what we are living in we need music to heal and unite us. We need something to remind of us of our humanity, our connections to one another and nothing communicates relate-able emotion like art.

When I was 11 or 12, my Dad and my brother in law Mark took me to see SRV and Lonnie Mack. If I could go back to that day and relive that, that is probably what I would choose? Watching my heroes with my other heroes.