Q&A with guitarit Jinx Jones, an impressive career he has visited nearly every conceivable style and genre

"The sincerity, honesty, and integrity of American Blues, Rock n’ Roll, Country, Gospel, and Jazz touches upon the human experience. In doing so, many barriers have been overcome."

In Jinx Jones’ impressive musical career he has visited nearly every conceivable style and genre of the electric guitar. From his work with R&B divas, En Vogue to his own acclaimed rockabilly albums, “License to Twang,” and the latest release; “Rumble & Twang,” Jones has always strived to expand the possibilities of the instrument. He accepts every musical challenge head on, always making an impressive statement with his music. The one thing that remains consistent throughout Jones’ multi-stylistic journey is the grace and finesse of his virtuoso playing. Jinx Jones honed his musical skills on the burgeoning Denver original music scene of the 1970’s and 1980’s. With brief stints in both Los Angeles and Houston, Jones’ studied music in concert halls, nightclubs, and theaters throughout the United States. Jinx has led his own bands with significant success in both Colorado and California. His first showcase band was Jinx Jones and the Jaguars, who in the early 1980’s had several records on regular rotation airplay in the Denver market. The band relocated to Los Angeles where they were immediately noticed by the musical press. Jinx Jones has lent his guitar-playing prowess to many artists and groups during his career. During the Summer of 1976, Jinx supplied backing guitar to the King of Rock and Soul, Solomon Burke. Later that summer he also backed soul-singer Howard Bomar in opening slots for Johnny Taylor, Harold Melvin and the Blue Notes, the Dells, the Sylvers, and Hot Chocolate. The following winter, Jinx was a member of the R&B group Distinctive Movement who performed concert dates with Natalie Cole. Jinx joined the popular doo-wop show band, Tom Slick in 1978 and toured the United States extensively throughout that year. During this time, he was part of a musical group that backed many touring shows that appeared at AstroWorld in Houston, Texas. It was during this time that Jinx first appeared with Rock n’ Roll legend Chuck Berry. Jinx performed with Berry off and on from 1979 through 1988, playing in one of Berry’s many regional touring bands. In 1984, Jinx asked to play several dates with American guitar legend Roy Buchanan. He recalls the impact and influence that Buchanan had on his concept of guitar. “I think that when I saw Roy play, with the ease and grace that he fully commanded at all times, I really saw the guitar as a whole new instrument.” Jinx played with Buchanan through his Colorado tours in the summers of 1984 and 1985. One of Jinx’s most treasured possessions is his guitar that Roy autographed with the caption, “Thanks forever.” Jinx added guitar tracks to the R&B album “In Search of the Last Trump of Funk” by the Nation Funktasia. During 1991 and 1992 Jinx played with R&B superstars En Vogue on their triple platinum album “Funky Divas,” and played both guitar and bass on their signature hit “Free Your Mind.” Other sessions with En Vogue followed, but Jinx Jones was then moving into another musical direction, and his days as a sideman for hire were quickly taking a back seat to his pursuit of a solo career. In Jinx Jones’ impressive musical career he has visited nearly every conceivable style and genre of the electric guitar. From his work with R&B divas, En Vogue to his own acclaimed rockabilly albums, “License to Twang,” and “Rumble & Twang,” Jones has always strived to expand the possibilities of the instrument. In 2006 - 2007 Jinx was invited to perform for several shows and festivals in Europe. His headlining performance in Finland was recorded and released in 2008, producing the acclaimed “live Twang in Finland” CD. His latest release, “Rip and Run” has received enthusiastic reviews in both guitar magazines and publications featuring Americana and roots music.

What do you learn about yourself from the blues & Jazz music and people?

Blues music transcends all cultures, ages and, languages. The first music that I remember hearing that really got me going was rock n’ roll. It was years later I discovered that it originated from the blues. I’ve been fortunate to have performed with many great blues and jazz artists, which has been a vital learning experience.

Blues represents an important origin of most American music forms.

How do you describe Jinx Jones sound and songbook? What characterize your music philosophy?

I have played many forms of American music, R&B and Soul, jazz, country, blues, rock n’ roll, and just about everything in between. I enjoy blending all of these styles into my sound. I love the electric guitar, I always have. It has a distinctive sound and I bring its lush textures to the music I create. It translates the music in my imagination into something you can hear, so I am grateful that I chose the electric guitar to be my voice.

How has the Blues/Jazz and Rock Counterculture influenced your views of the world and the journeys you’ve taken?

My views of the world have been largely influenced by the people I have met from every corner of the globe. "Blues music transcends all cultures, ages and, languages. The first music that I remember hearing that really got me going was rock n’ roll. It was years later I discovered that it originated from the blues. I’ve been fortunate to have performed with many great blues and jazz artists, which has been a vital learning experience."

Probably the most influential person I’ve played with was Roy Buchanan. He was very encouraging when I played in his band. The “advice” he gave me was not in what he said, but what he did. When he played something, it was a genuine expression from his heart and soul. He played it like he meant it.

Yes, but too many to mention. Something happens every night that I am on stage that makes me smile. That’s why playing guitar is so much fun, even after doing it all of my life. Performing music live on stage is filled with moments that will only happen once and never be exactly the same ever again.

Music was always something people created physically - using their hands, feet, mouths, lungs and pretty much any part of their body they needed to use. This was done using instruments that were (like all human inventions) extensions of the human body, the voice, the heartbeat, etc. With the advent of computerized music in the 1980s we hear a lot of contemporary popular music that appears to have lost the human touch. I believe that music may have nearly skipped a generation or two, but in the long run – people will not be satisfied with synthetic music and there will always be a need for genuine musicianship.

That I would be a billionaire from record sales and concert appearances!

What has made you laugh Chuck Berry and Solomon Burke? What touched (emotionally) you from Roy Buchanan? 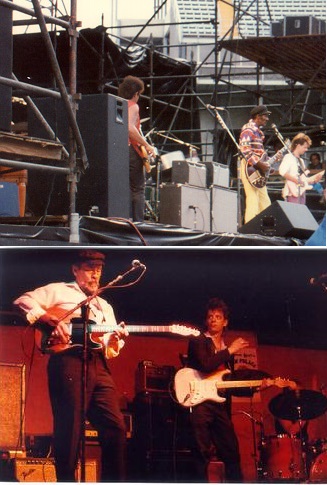 I was fortunate to have been on stage with these great artists, and to have made music with them. Roy Buchanan (2nd photo) was the nicest “big name” person I’ve met. He was so incredibly gifted as a guitarist that he was never nervous about performing. He knew he could reach every member of the audience – and that’s not bragging, he really could do that. His playing had an effect on people – I’ve never seen anything like it. Every note he played, he really meant it with great sincerity.

Solomon Burke was a great performer on stage and had an incredible ability to make every song his own. He also was always late to the show. In fact, he would not show up until after the announcer had introduced him on stage. But he was so great that no one was upset that he had kept them waiting.

Chuck Berry (1st photo) was amazing to watch up close. When I played with him, he did all of his iconic moves on stage, the duck-walk, the leg skip, you name it. He danced with his guitar and it was incredible to see.

What are the lines that connect the legacy of American Music from Blues to Jazz and from Rockabilly to beyond?

I think the key ingredient is the connection with the listener. This kind of music was borne out of human hardship, and the joy, excitement, sinning and suffering which are all part of the human experience. This is something people from all walks of life can understand – even relate to. This is why Johnny Cash’s music can touch the emotions of people in Africa, or why young people in Asia find joy in rockabilly dancing. This is why American Blues connects to people everywhere. The music is an expression of the human experience. Just because it is simple does not mean it lacks depth.

What is the impact of Blues, Rock n’ Roll and Jazz on the racial, political and socio-cultural implications?

I cannot speak from a position of expertise on this topic. I can just say that America music has found a commonality with people from all countries, rich and poor, old and young. The sincerity, honesty, and integrity of American Blues, Rock n’ Roll, Country, Gospel, and Jazz touches upon the human experience. In doing so, many barriers have been overcome. America would not have progressed as far as it has without its indigenous music forms which crossed the lines of social class long before there was a Civil Rights Movement.

There are many historical (and legendary) live performances I wish I could have witnessed. Charlie Christian’s first night with Benny Goodman, the day Les Paul discovered multi-tracking with magnetic tape, any of the early sessions that Sam Phillips engineered and produced, or some of the early Capitol recording sessions in Hollywood. 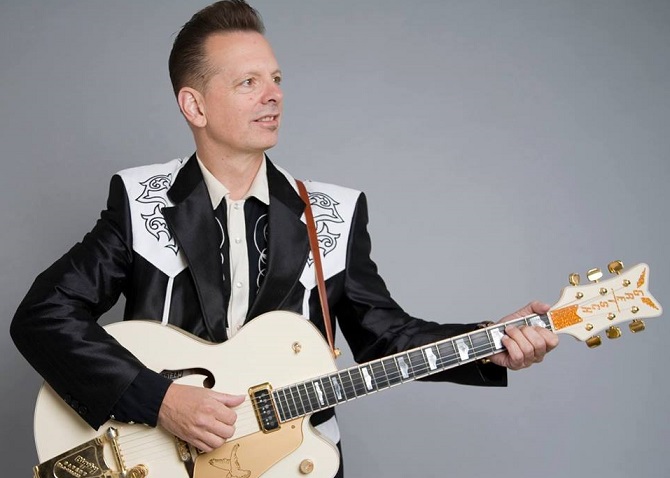