"Music has been a part of human culture for thousands of years since we first gathered around a fire and chanted, moved our bodies, hit things, shook things, and ecstatically celebrated living and thriving together. I get up every day with an intention to serve that same purpose."

Jim Greiner is a multiple award-winning, internationally acclaimed percussionist, corporate team building drumming pioneer, educator, inspirational speaker and drum circle/community drumming leader. Jim performs, teaches and conducts interactive rhythm sessions worldwide for corporate and community groups from his base in Santa Cruz, in the San Francisco/Monterey Bay Area of California. Jim has been playing percussion since 1970, including two years in Africa where he was profoundly moved by the power of rhythm to uplift and unify people. He has been teaching since 1980, including thousands of percussion clinics and hands-on playshops throughout North America and beyond in schools and universities, music stores, music camps and community centers. Making Santa Cruz his home since the 1970’s, Jim travels the globe performing, teaching and conducting his award-winning Rhythm Power® interactive, motivational rhythm programs for corporations, conferences and meetings, schools and private celebrations of all types and sizes. He is also widely recognized, through his clinics, DVD’s and published writing, as an expert in the way different rhythms affect us in universally beneficial ways, and in using playing percussion as a way to reinforce positive patterns of attitude and action… productive, real-world Life Rhythms.​ 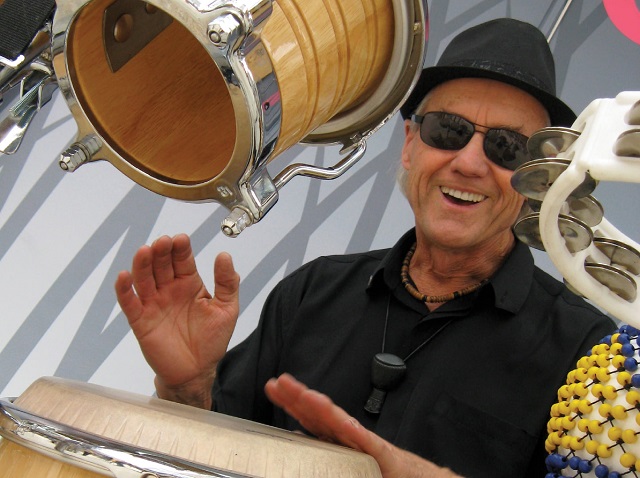 Thousands of shows worldwide with a number of musical groups.  Jim has played at scores of the top hotels and resorts throughout the U.S. and internationally with the Bill Hopkins Rockin’ Orchestra, one of America’s premier corporate event bands. He has also performed at dozens of festivals with R&B vocalist Sista Monica Parker, the iconic Rock/Jazz group Quicksilver Messenger Service, Ashwin Batish’s Indian/Jazz fusion Sitar Power Band, Jerry Miller Band, with popular festival headliner Gary Gates, and with other groups. In addition, he has played at many hundreds of clubs throughout the U.S. in a huge range of styles, including Latin, R&B/Funk, Rock, Reggae, Jazz, Blues, Pop and African. Jim has taught the joys of playing percussion instruments to literally tens of thousands of people worldwide.  His students come from all walks of life, of all ages, and at all levels of experience from very beginners, to advanced university-level students, to successful working musicians. Through his own company, Jim Greiner’s Hands-On! Drumming® Worldwide Events, he has taught participants in over 3,000 corporate groups and conferences how to “communicate, collaborate and celebrate through rhythm”™. In this work, Jim uses rhythm play as a vehicle to create and reinforce positive, real-world Life Skills and Life Rhythms.

How has the World Music and Rock Counterculture influenced your views of the world and the journeys you’ve taken?

I knew from a young age that my life would involve travelling the world. I've been blessed to do so as I've played and taught percussion, and conducted interactive rhythm sessions worldwide for corporate groups and communities. I've seen that people around the globe play music to uplift themselves and unify their communities.

How do you describe your sound and music philosophy? What touched you from the sound of percussions?

My mission as a musician is community service through music. Percussion instruments energize me, release tension, helps to focus me on my best intentions, and to simply help me to celebrate the blessing of life.

I don't miss anything about the music of the past in today's music, because people everywhere are playing the traditional music of their own cultures, and integrating it with today's sounds and instruments. 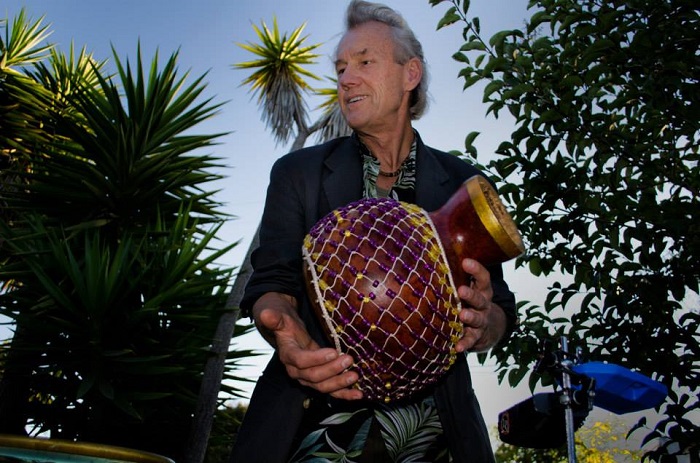 Two of my, many, musical influencers were Chumash (the people indigenous to Southern California) Elder Grandfather Semu Haute who demonstrated how to use drumming to calm our inner pulse and to focus on what brings us to the places we want to be. Also, Nigerian drummer, composer and social activist Babatunde Olatunji, who demonstrated how to use drumming to bring peace and respect for life into our lives, and the lives of others.

Are there any memories from your Quicksilver Messenger Service era which you’d like to share with us?

I missed the late 1960's San Francisco music scene because I joined the Navy after graduating from high school in 1965 because I wanted to travel the world. I got out after my last duty station in north Africa, and I travelled and drummed in Africa for another year. I then came back to the U.S. and played music around the country for another few years until returning to California. I had heard about all the great music coming out of SF and regretted missing it! Amazingly, in 2010, I was invited to join the iconic 1960's jazz rock group Quicksilver Messenger Service by Gary Duncan, one of the founding members! I performed on two very fun tours with QMS. At one of our gigs headlining at a festival in northern California, we were sitting after our set meeting and greeting the public. Three women came up to us and asked us to sign their copy of the festival poster. One was in her sixties, one around middle age, and one an older teen. The eldest introduced herself, her daughter and her granddaughter as long time QMS fans! She also said, she and her late husband fell in love listening to QMS music and said she passed the music on to her daughter, and to her granddaughter as a way of bringing them closer to him. She had tears in her eyes as she told us this story, and the huge smiles on all of their faces told us how much this meant to them! This was the perfect example of how music connects people into community now, and has throughout the ages! I'm blessed to have the privilege of being a part of this tradition!

Are there any specific memories or highlights of your career that you would like to tell us about?!

I was playing with Babatunde Olatunji's Drums of Passion Band in upstate New York a few years before he passed. The energy of the band, and of the people dancing to us, was powerful and relentless. I noticed that Baba had not played his big Ngoma drum for several minutes. He then hit one note, "Boom!" that elevated the energy of the entire gathering to an even greater height. Baba, as a wise elder, had let go of all the notes that did not need to be played, and played the one sound, in just the right place, that brought us all to a new level of community celebration! 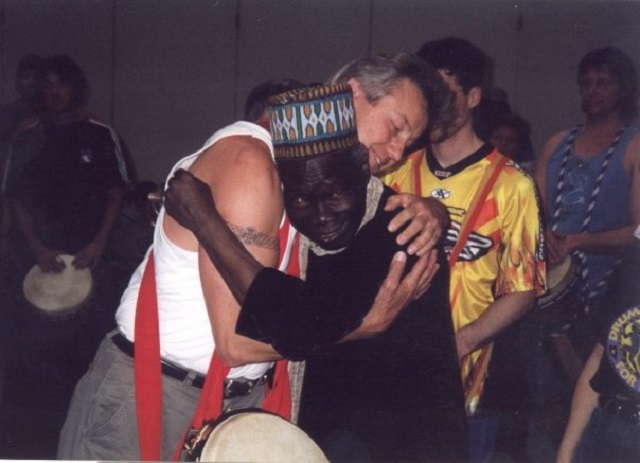 "I knew from a young age that my life would involve travelling the world. I've been blessed to do so as I've played and taught percussion, and conducted interactive rhythm sessions worldwide for corporate groups and communities. I've seen that people around the globe play music to uplift themselves and unify their communities." (Photo: Jim Greiner with Nigerian drummer and social activist Babatunde Olatunji)

Even more people playing, and experiencing, music that brings us together, and inspires us to use our innate human ability to band together to create powerful, meaningful and positive changes to us and to our world.

Music has been a part of human culture for thousands of years since we first gathered around a fire and chanted, moved our bodies, hit things, shook things, and ecstatically celebrated living and thriving together. I get up every day with an intention to serve that same purpose.

Listen to others, internalize positive attributes, express myself clearly, ground myself in reinforcing positive actions... and having a creative and playful spirit.

Today, anywhere people gather together to make music, move our bodies, chant joyful sounds, and celebrate the simple truth that life is a miraculous blessing! 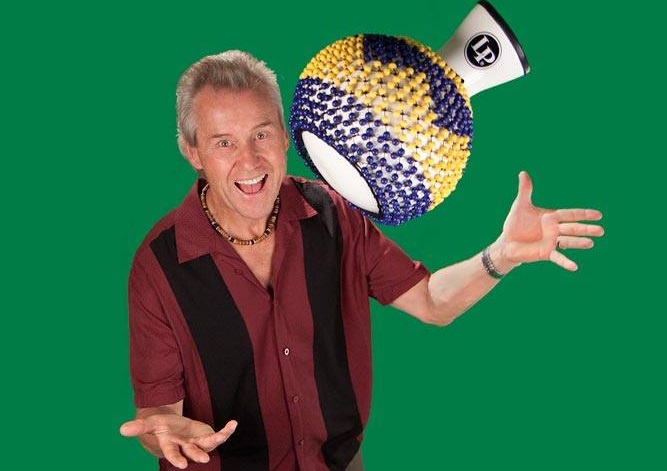