"At the beginning of this genre, especially the blues, the impact was huge, as we know, a real revolution on many levels, and the deep meaning of a music whose roots were involved in slavery during 200 years, is unrivalled in the history of human species."

Jazz guitarist Johnny Branchizio was born in Rome, Italy in 1969. He started to play when he was 10 years old. At this time he was living in Milan. In this city he played with clarinetist Tony Scott, the musician of Billie Holiday, Charlie Parker and Billy Evans, among others. In 1993 he moved to Chicago, where he was playing Rhythm & Blues with local musicians. He learned to play from the best jazz guitarists like: Pat Metheny, Joe Pass, Mike Stern, John Scofield, and Jim Hall. Since the mid-nineties he lives in Barcelona and he was involved in various interesting projects such as: Tom Waits, Calexico, Boney M, Amparanoia, Kati Autrey, Memory of the Blues, recording albums and playing the guitar during international tours in Europe and South America. He also composes music for films, theater and dance. 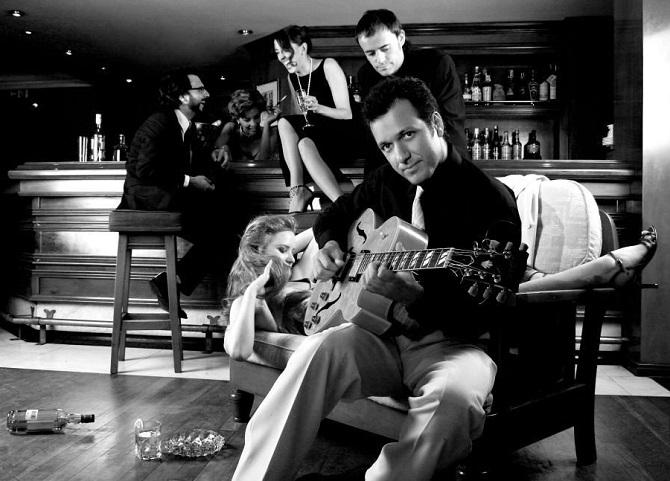 What do you learn about yourself from the Jazz n’ Blues culture and what does the blues mean to you?

The blues was my entrance to the world of music when I was 10 years old and later on I got to know the jazz which is a great tradition that allows us to meet our personality on an individual level and therefore to convey our personal point of view.

What were the reasons that you started the Jazz researches? What characterize your music philosophy?

My research through this music genre was born out of necessity after listening to some vinyl around the house; at that moment, I felt this was the music I wanted to play, it was a sudden fascination. The music philosophy is based on the attention that we can put while listening, so to be a good improviser essentially means to be a good listener, and playing means reproducing the sounds that we listen to. In this sense then, the more we play, the more the instrument becomes irrelevant and the issue becomes more and more about playing our inside feelings and the story we want to tell.

Without a doubt, getting to know musicians with vast experience has been the best experience, especially in the beginning. I remember an American pianist, David Lenker, who lives here in Spain; each time that I played with him, I could learn something important. The best advice I was given is to play with musicians that are better than you, and always be finding yourself and not imitating or copying others. Yes, when I was very young I was living in Milan (Italy) and I was lucky to play in a jam with Tony Scott, the great clarinetist, who lived in Milan at that time. For me, that time was an incredible experience: to be able to feel so closely the energy of a great jazz hero.

I miss the spontaneity and the innovative spirit in jazz, there are many “players of styles” but few active composers, at least where I live (Barcelona, Spain). Regarding the future, I wish to continue writing and learning.

The ability of people to listen to music fully and, in this way, to respect it.

Make an account of the case of Jazz n’ Blues in Italy. What touched (emotionally) you from the local Jazz circuits?

I haven’t lived in Italy for years, I reside in Spain, in Barcelona, and I don’t really know the Italian scene nowadays. Lately I’ve really enjoyed listening to some friends playing stuff that I liked a lot, and collaborating with them.

What is the impact of Jazz and Blues music to the racial, political and socio-cultural implications?

At the beginning of this genre, especially the blues, the impact was huge, as we know, a real revolution on many levels, and the deep meaning of a music whose roots were involved in slavery during 200 years, is unrivalled in the history of human species. Today things are different, and playing this music is a tribute to millions of people who gave their lives, even though probably many musicians are not that aware of it. Still, they devote themselves to take advantage of a marvelous language as a simple universal heritage for everybody.

Well, I would love to go back to 1959 and live a magical moment during the recording of “Kind of Blue” by Miles.