Q&A with Italian musician Max Arrigo, the founder of the Nandha Blues a classic rock band with a southern flavour

"Rock in the 60s had the important task of generating the consciousness of young people who until then did not exist as such. It represents a form of rebellion that slowly, over the decades, has been taken away from young people who are currently without the tools they need to change the world. Rock and its philosophy must return to the heritage of young people if we wish for real change."

Max Arrigo is the founder of the Nandha Blues an Italian classic rock band with a southern flavour, well known for his fine slide guitar work played mostly in standard and open tune. He has been the leader of well-known southern rock bands as Voodoo Lake (1999/2006) and Shanghai Noodle Factory (2006/2010) He’s also appreciated for his soulful voice, which has been compared to the singers who pioneered this kind of music. Over the years, he has shared European stages with several artists and bands from all over the world: Marc Ford (Black Crowes & Ben Harper), Hook Herrera (Gov’t Mule and Willy DeVille), Jono Manson, Johnny Neel & W.I.N.D., Steepwater band, Mauro Pagani (P.F.M.), Savoy Truffle, Joe Pitts and the Liquid Groove Mojo, Andy Penington, Pat Savage, Rebel Storm, Flatman, The Cell, Ulysses (UK) and many more. 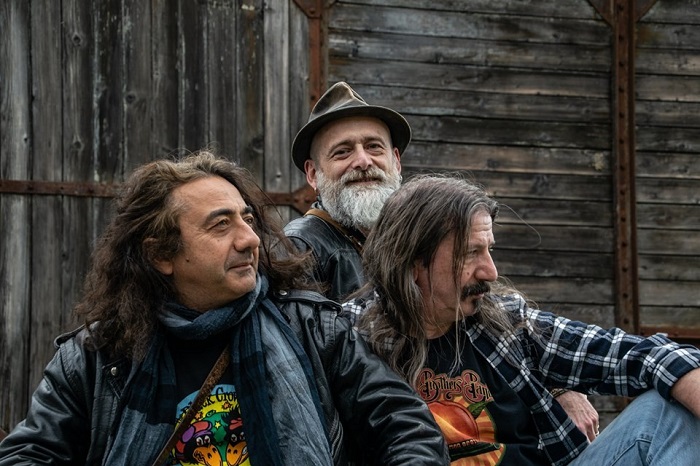 Nandha is an international musical project, since 2010, including the talented Italian musicians Alberto Fiorentino on Bass, Roberto Tassone on drums. That which brings the band members together is a taste for improvisation based on blues, rock and a little jazz. A formula of age-old traditions but one which has remained relevant and which goes straight to the heart, used as a means of entering into harmony with the cosmos.

How has the Southern Blues Rock Counterculture influenced your views of the world and the journeys you’ve taken?

I believe that the counterculture of blues and southern rock was already part of me, somehow, at the beginning of my existence, for the values ​​that my family transmitted to me coming from the deep south themselves (of Europe of course!), but in the same way with that mix of African and Mediterranean traditions. I was born in 1967, so in the late 70s, when I was a kid, you could see all those American TV series on television where the soundtrack was basically blues and rock, I think that was my first imprinting. I already loved nature and rural life even though I grew up in a big city, and during the summer holidays in the mountains I turned into a sort of Huckelberry Finn, spending the days watching the water of the stream flowing by and playing an acoustic guitar, trying to learn some fingerpicking style. Later, when I came into contact with the albums of bands like the Allman Brothers and Lynyrd Skynyrd, I was completely enchanted by the sound and the look of these guys that I immediately felt familiar with. In the end I believe that the true spirit of southern rock is the love of simple things, nature and also racial integration. All this in a context of relative poverty but rich in popular culture, very similar to the south of the whole world.

How do you describe Nandha Blues sound, music philosophy and songbook? Where does the band's creative drive come from?

Nandha was an old woman and owner of a bar in downtown Aosta where we live. Everyone used to say she was a witch, she was over 70 and she had a lover who was maybe 40 years old. Two young girls used to work in this bar like slaves, they had no family, only Nandha. Nandha did not allow the two girls to lead an independent life. A man used to go every morning to Nandha's place for breakfast and he fell in love with one of the two girls. One day he asked her to go out that night and she said "I can't, you must ask Nandha". He was really upset and confused. This guy kept on going to the bar every morning, but he was so frustrated about the situation. All his friends tried to change his mind but he couldn't stop talking and thinking about Nandha and the girl. One night, this guy decided that the following morning he would take the bull by the horns and he would ask Nandha if he could go out with the girl. The next morning, the bar had closed forever and Nandha, her boyfriend and the two girls had disappeared. The man kept on looking for his lost love for months but without success. This man was a good friend of mine, and before we heard his story, we hadn't been able to think of a name for the band. I believe that the music, the lyrics and the magic of Nandha stems from this story from which we continue to draw inspiration. 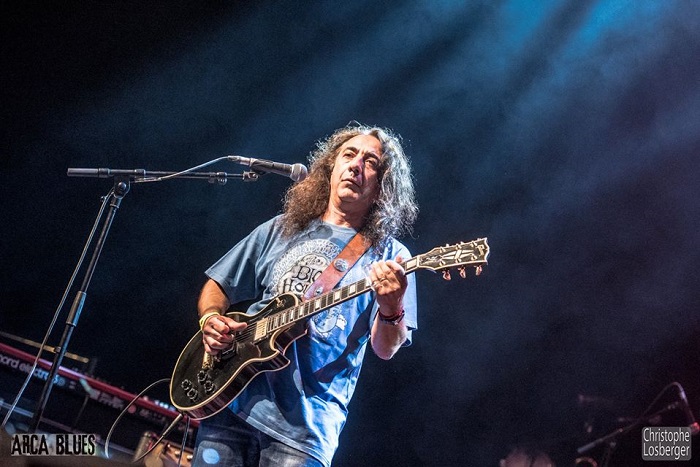 "The most important lesson I learned during my life and musical journey is humility. All the greatest musicians are humble and feel joy at the mere fact of playing and sharing emotions. BB King taught everyone this, he lived the music with joy for as long as he could."  (Max Arrigo, Arca Blues, Arcadium, France, 12.10.2018 / Photo by Christophe Losberger)

During my musical career, which began in the early 90s, I have come across bands that were following our same path with the same dreams and goals, such as Flatman from Germany, the Cell from the Czech Republic, Savoy Truffle from Japan, and Rebel Storm from USA, all good musicians and dear friends, and I have learned something from them all. But I think my real mentor has been Joe Pitts from Little Rock, who showed me how, before anything else, the sound comes from the heart, then from the fingers and finally from the guitar and the amp. Joe left the music circus, by choice, but before he did he gave me a great gift, an amazing guitar solo on “Bring Me Some Water”, a song from “Nandha Strikes Again”, our latest album.

I’m very lucky because I have shared the stage with great musicians like Marc Ford from the Black Crowes, the North Mississippi Allstars, Leo Lyons from Ten Years After, Marcus King Band, Steepwater Band and others, all incredible musicians. The Dickinson Brothers are very friendly, Luther brought his gear but he wanted to plug into my Marshall JCM 800. After my set Leo Lyons came up behind with that white moustache like a real English lord and said "good job Max!". I was surprised that he even remembered my name, wow!

But the funniest episode was one with Marc Ford. It was 2007, and we had to open for him at a club in Turin, Italy. I was terrified because I considered Marc a guitar god, I mean Marc fuckin' Ford! Anyway, before his soundcheck, he came up to me and said, "Hey man I forgot my guitar in the hotel, could you lend me one of yours?". I replied, “Of course, you can play both of them if you want”. Marc laughed and said, "I only have two hands, one is enough!" So Marc played my Les Paul Tobacco Sunburst all evening, I'd never heard my guitar sound like that! But the fact that he'd forgotten his guitar showed me he was only human, so my performance was more relaxed.

What is missing now is not the music, there are excellent bands around but they struggle to emerge because there are no foundations on which to put down roots, whereas just a few decades ago the ground was very fertile. Electric guitars have lost much of their power among young people, who have been overwhelmed by consumerism. Not as many records are sold as they used to be, but I think history is cyclical and rock 'n' roll will probably recover what has been stolen from it sooner or later. 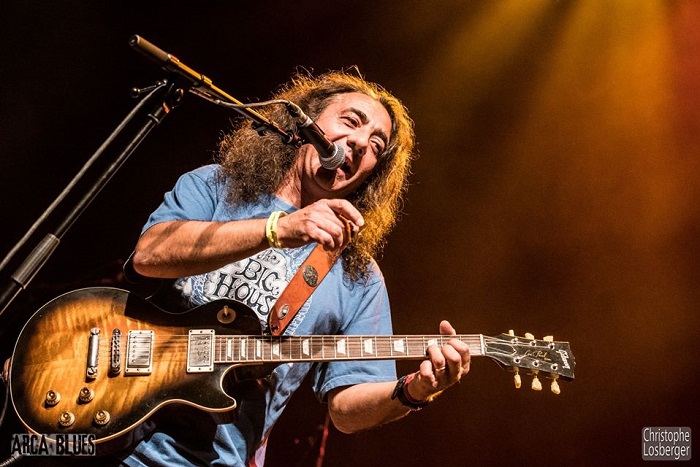 Make an account of the case of Rock Blues in Italy. Which is the most interesting period in local scene?

In Italy there’s always been a very rich blues and blues rock scene, at this moment there are three bands in particular, whose sound I dig most. I’m talking about Gospel Book Revisited, on whose last album Luther Dickinson appears, the young Chris Horses Band, more of a jam band, and Andy Penington and the Wild Boars, who like to mix rock 'n' roll with bluegrass, country and folk (both American and Irish). I mention these bands because I feel close to them in terms of sound, but actually I could make a very long list. Although the scene is so rich, it is very difficult for Italian bands to enter the programming of big festivals, so those who make records like us prefer to look for “fame and fortune” abroad.

The most important lesson I learned during my life and musical journey is humility. All the greatest musicians are humble and feel joy at the mere fact of playing and sharing emotions. BB King taught everyone this, he lived the music with joy for as long as he could.

What is the impact of Blues and Rock music and culture on the racial, political, and socio-cultural implications?

Rock in the 60s had the important task of generating the consciousness of young people who until then did not exist as such. It represents a form of rebellion that slowly, over the decades, has been taken away from young people who are currently without the tools they need to change the world. Rock and its philosophy must return to the heritage of young people if we wish for real change. Music brings people closer together and shortens geographical and cultural distances, and that's why it has always frightened the powerful, who have always tried to impoverish it of messages and contents.

You give me one day but I beg for 3!! July 3–5, 1970, Atlanta Pop Festival feat Allman Brothers, Johnny Winter, Jimi Hendrix, Johnny Jenkins, Bob Seager; Mountain and many more. 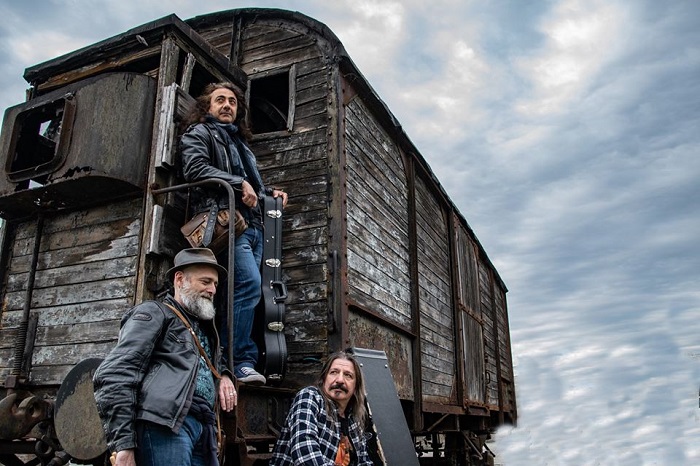