"The Blues is a journey that follows the path of my life. I'm lucky, as the Blues-Rock culture has made me travel the world, meet nice people, feel great emotions. At last, what I always seek is to try and convey feelings, emotions!"

Jimi Barbiani: The Ceasar Of Slide

Jimi Barbiani Band is a project by Italian guitarist Jimi Barbiani, one of the best rock-blues slide guitarist in Europe. The JIMI BARBIANI BAND is an alchemy of influences from artists such as Hendrix, Joe Bonamassa, Jeff Beck, Free, Gov’t Mule. The explosive sound of band is best conveyed in live performances, where the heterogeneity of the show and its mounting impact emphasize the personality of each member of the band, allowing them to span from the long-jam ride to the most passionate blues-rock, ever creating a unique sound. He co-operated with Johnny Neel, keyboard-player of the Allman Brothers Band and Gov’t Mule. Jimi jammed and opened shows on several stages with: Eric Sardinas, John Mooney, North Mississippi All Stars, Devon Allman, Mac Ford, Andy J Forest, Buddy Wittingtone, B.B.King, John Mayall, Robert Plant, Blues Brothers, Greg Allman, Joe Bonamassa, Brian Auger, Ten Years After, Blasters, Ike Turner, Steppenwolf, Canned Heat, Robert Cray, Dr Feelgood, Mick Taylor, Bill Wyman, and Johnny Winter. Jimi Barbiani played at the most important festivals and clubs in Europe and USA. Jimi, just like the left handed guitar legend, plays from his soul, with a style reminiscent of Muddy Waters and his deep vibrato and a slide expertise that reminds of Duane Allman. Always with good feelings, Jimi’s mood style blends technical ability and deep instinct. His music is inspired by the crowd as he plays for all the people who enjoy the spell of classic sounds as well as the raving rock-blues energy. With his eyes closed, Jimi becomes one with the stage, playing with an absorbing energy that leads the public, the musicians and himself to a sort of collective trance. After a series of albums with Italian rock band of W.I.N.D, Jimi Barbiani has stepped out on his own and released his second solo album “Blue Slide” (2014). Featuring 10 tracks of bad-ass, killer, retro-70s, blues-based, heavy guitar rock riffage that speaks the six string truth with a strong emphasis on Southern Rock-induced slide guitar mojo, with special guest vocalists Johnny Neel, Cameron Williams and Piero Patlay who rock the good Barbiani jam:house down to the ground, all adding up to landing as an essential addition to your blues/rock collection.

What do you learn about yourself from the blues-rock culture and what does the blues mean to you?

For me, the Blues is a journey that follows the path of my life. I'm lucky, as the Blues-Rock culture has made me travel the world, meet nice people, feel great emotions. At last, what I always seek is to try and convey feelings, emotions!

What were the reasons that you star the Blues/Rock researches? How do you describe your sound and songbook?

I began to play the guitar late, when I was 18. My father had been collecting Blues, Soul, Rock, Rhythm’Blues vynyl records since the 70s, so I could listen to that music everyday at home, and this had a huge influence on my music education. Among the artists who influenced me the most, I can certainly name Hendrix, Led Zeppelin, all the British Blues, Allman Brothers Band, Bonamassa, Jeff Beck and the old school bluesmen such as Muddy Waters, Willy Dixon, Etta James. 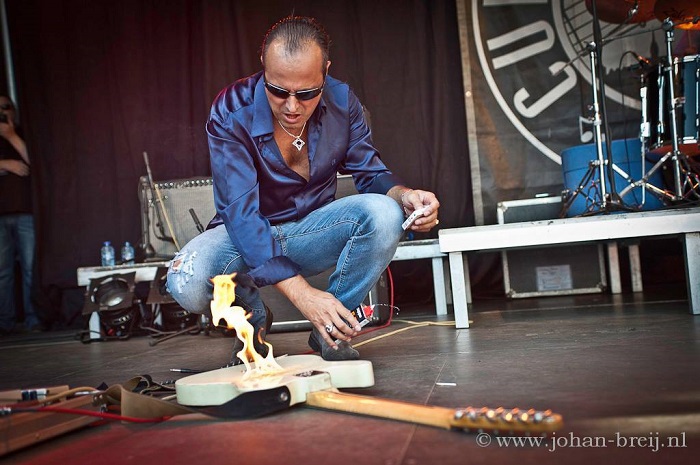 "I surely miss the musicians that unfortunately passed away or are passing away, as I will not be able to see them 'Live' anymore. It'd be nice to watch a 3D concert of Jimi Hendrix... I'd like to be there and hide behind the Marshall amps, invisible to anyone, as I did at a Jeff Beck concert..."

It was important to me to have the opportunity to open the concerts of B.B. King (2 times), Blues Brothers, Bonamassa, Robert Plant, and more. To share the stage with artists of such level is very fortunate and it's something that makes you grow up quickly as a musician!

It was very exciting to play with Johnny Neel, Buddy Whittington, Eric Sardinas, but luckily things like these keep happening to me. In a big festival in Holland this year, in August, where I played with my band around 4 PM, Johnny Mastro invited me on stage with his band, for 30 minutes, at midnight, in front of 7 thousand people. Fantastic!

I recall 2 concerts in Poland where I invited some people on stage, to have them dance with us at the end of the gig, and they were so moved by this that they started to cry. I keep the pictures of that night in my bedroom.

At the end, the concert was extraordinary.

I have so many stories like this to tell and I think someday I'll write an "on the road" book about the things that happened to me. It's Rock'n'Roll! 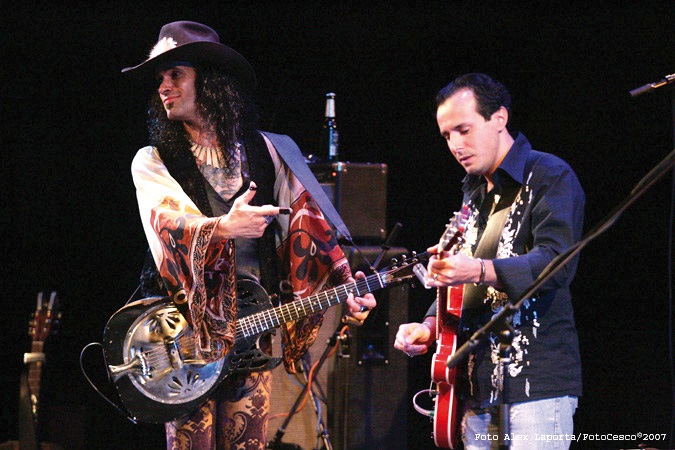 "I'd say that the socio-cultural impact of Blues music is not as significant as it used to be. In the 40s, 50s, 60s, the black bluesmen had a lot of things to sing and say through their music."

I surely miss the musicians that unfortunately passed away or are passing away, as I will not be able to see them "Live" anymore. It'd be nice to watch a 3D concert of Jimi Hendrix... I'd like to be there and hide behind the Marshall amps, invisible to anyone, as I did at a Jeff Beck concert...

Blues, as any kind of music, goes under a continuous process of "transformation" and "contamination". Especially nowadays, with the Internet. So I'd say that you don't need to be necessarily from Mississippi to play the Blues. Musicians such as Frank Zappa, Joe Bonamassa, Pino Palladino, Frank Marino all have Italian ancestors.

Certainly, the music tradition is different in US, UK, Italy, but now the borders are really closer and maybe there are no borders anymore when it comes to music.

Unfortunately, I don't like the music that is popular in Italy right now... eh eh! Maybe that is the reason why we play a lot abroad and not as much in Italy. Anyway, there are some excellent blues festivals in the summer, for example those in Pistoia and Porretta. That's a good question... I'd say that the socio-cultural impact of Blues music is not as significant as it used to be. In the 40s, 50s, 60s, the black bluesmen had a lot of things to sing and say through their music. Then the 70s came, the protest of the young movements, the hippies, and with that came a huge of wave of amazing music (Beat, British Blues, Rock, Progressive, etc).

I think that today, more than a racial or sociocultural movement, what matters is to have a "personal idea", to be able to "express something", to have "your own voice".