"Blues speaks truth to power. I believe that Blues is a place where people from all sides of the human experience can come together and enjoy and feel the power of the Blues and forget about all else for a little while."

DogTown is the West Los Angeles neighborhood that separates the communities of Venice Beach and Santa Monica. In the 1970s it was the rougher part of town and it was the nexus of the skateboarding revolution that brought the sport into the mainstream. This neighborhood captures the essence of the LA surf and skate culture, and the guys from the southland-based DogTown Blues Band have adopted it as their moniker. The band are: Richard Lubovitch (aka “Loob”), Chicago born guitarist/producer. Richard played as short term replacement side man for many back in the day, such as Rufus Thomas Gatemouth Brown, and others. Also partner and manager of The Track House Recording Studio in Van Nuys, Ca. for 10 years from 1991, until it closed in 2001, where he performed on many film sound tracks, TV shows and commercials, as well as produced many Blues and Jazz recordings. Bill Barrett (Harmonica), can be seen and heard with his band The Bastards of Belleville, a Gypsy Jazz Quartet, currently playing all over Southern California. In 2014, he played with Wilco Guitarist Nels Cline on his Dirty Baby project, and was with Hazmat Modine for many years. Bill is also featured on many great Jazz and Blues recordings. Wayne Peet (Organ/Piano), owner of Newzone Studio. A frequent collaborator with Nels Cline, also on the Dirty Baby Project. He has also worked with such Jazz giants as Kenny Burrell, engineering and mixing his last five CDs and composed numerous film and television scores. Lance Lee (Drummer) - Played with Diana Ross for 12 years, then was with Kenny G for years and continues to be one of the most sought after drummers for studio and touring in LA. Trevor Ware (Upright Bassist) - Kenny Burrell’s regular bass player and the current bassist for The Count Basie Band. Tom Lilly” (Electric Bass) - Played with Lindsey Buckingham, Jefferson Starship and Edgar Winter back in the day, and recently 12 years with Beth Hart. Richard Lubovitch is proud to announce the release of the new CD, by The DogTown Blues Band, Everyday. This new CD, comprised of 10 tracks, 43:20 in length, is “Loob's” impressions of his 30 years in Chicago listening to, and playing with, the great Chicago Blues Masters that he saw throughout his time there, in the clubs, and during his many years of going to Maxwell Street to hear the legends of that time. It offers 5 standards and 5 original compositions, and featured, are the amazing vocals of Barbara Morrison, who's vocal interpretations of Everyday I have The Blues, Easy Baby, Ain't Nobody's Business and Same Old Blues, are something special to hear.

I would have to say that growing up in the 1960s and 70s that I was profoundly influence by the counterculture in America…From the music and arts, to the clothing and social and political views. From the Beat Generation, I was influenced by Blues, Jazz, Art and Literature…In particular by Muddy Waters, Willie Dixon, Miles, Brubeck, Kesey, Electric Koolaid, Acid Test and Rauschenberg's and Pollack’s paintings. From the original Hippies…Rock, the evolvement of Electric Blues, via Buddy Guy's overdriven sound that influenced Hendrix. Not to mention my musical influences…Hendrix, Zappa, Wes Montgomery, Muddy Waters, Willie Dixon, The Beatles, Buddy Guy, B.B King and many many more.

How do you describe The Dogtown Blues Band sound and songbook? What characterize your music philosophy?

Our sound would best be described as a fusion of Blues both traditional and contemporary, with overtones of Jazz mixed in. For example, on our first CD "Dogtown Blues", in the solo section of Wang Dang Doodle, it takes a subtle shift from a riff based vamp rhythm section, to playing the chords of Coltrane’s Impressions under the soloist. And on the new CD "Everyday", on Boxcar 4468, we go from a straight 8 bar Blues, to a walking base line Jazz solo section in 6/8. We also like to cover Blues from the 1920s to present day. I would say what characterizes my musical philosophy is, that Blues and Jazz, Rock and all of its sub genres are just Blues to me, and are musical ingredients and spices to be used to cook up a gourmet meal for your ears. 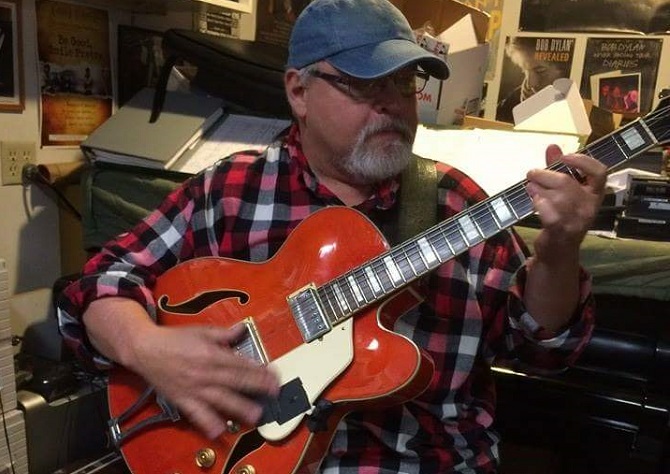 "I am fully immersed in to listening to Blues from all eras, so I don’t really miss anything. As far as the future of Blues...In general, I think it is pretty bright and growing all the time."

My mentor, Joe Di Orio, has had the most influence in both my musical and personal life. I was fortunate to study and hangout with him for 2 years. I learned more about Blues and Jazz from him than anyone else. He embodied the most positive musical energy that I have ever come across, filled with love. Joe taught me that it had to come straight from the heart...That you had tell a story, and mean every note, and define what you do as a musician. Joe is one of the greatest guitarist and improvisers of all time, and the pages upon pages of handwritten music he gave me is among my most prized possessions.

Yes. I would like to say that working with the Great Barbara Morrison on our current CD Everyday, was one of best studio experiences of my Life. The love and energy that she brought to this project was amazing to see, feel and record. And also having Bill Barrett on Chromatic Harmonica, and being able to record him on both original songs we wrote together and re worked standards, has been an absolute joy.

I am fully immersed in to listening to Blues from all eras, so I don’t really miss anything. As far as the future of Blues...In general, I think it is pretty bright and growing all the time.

I would like to see classic rock stations in America and around the world dedicate 4 to 6 hours of daily Blues programming to their radio schedule…Including independents getting real commercial exposer. And I would like to see local musicians giging in their perspective towns, get paid something that would give them a chance to make a living. 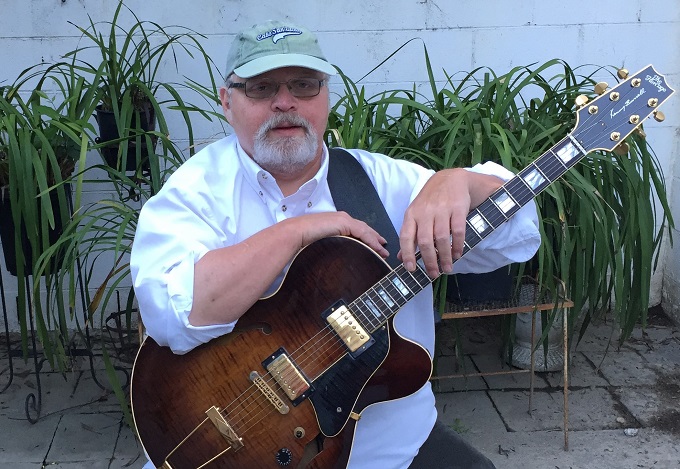 "Our sound would best be described as a fusion of Blues both traditional and contemporary, with overtones of Jazz mixed in." (Photo: Richard Lubovitch aka “Loob”, Chicago born guitarist)

What is the difference and similarity between West Coast/California and Chicago Blues & Jazz scene and circuits?

For me, in my playing, I find the Real difference on the West Coast is the openness to experiment with blending many music genres to create Blues. The similarities would be that I am from Chicago and will always have that in what I do. A great Chicago Shuffle sounds just as good in Chicago as it does in LA, with little difference. As far as playing live gigs…The scene in Chicago takes it hands down.

What has made you laugh and what touched (emotionally) you from Rufus Thomas and Gatemouth Brown?

I only played with Rufus Thomas as a fill in rhythm guitar player on six gigs, and had the same situation with Gatemouth…Playing with him for 8 weeks. So I did not have the opportunity to really get to know them. But there were a couple of memorable moments that I believe advanced me as guitar player. What really stands out is that moment I realized I was going on stage with these two All-stars and originators of Blues, R&B, Soul and Funk. I was overwhelmed with emotion. As far as something funny…When at a rehearsal with Rufus Thomas, I honked a chord. Everybody laughed. Then Mr. Thomas turned to me half joking and said, "Next time you owe me 50 bucks." On an emotional level, sitting and playing by myself at a sound check, Gatemouth came up to me and sat down and said "I notice you don’t use a pick like me, but you mostly use your thumb picking down." Then he proceeded to show me how to use my first second and third fingers to pick up strokes and play little arpeggios and sweeps. This changed everything, and filled in a huge hole in my picking hand.

What do you learn about yourself from the Jazz & Blues music and culture and what does the blues mean to you?

I learned it’s all about positive energy and the ability to lose yourself and find yourself all at the same time. I learned that when you play music, you have to let everything go and clear your mind of the everyday struggles of daily life so the music can flow through. But most importantly, it has to be about the band, not the individual. And when you have a band made up of some of the best players around, it’s easy to do. 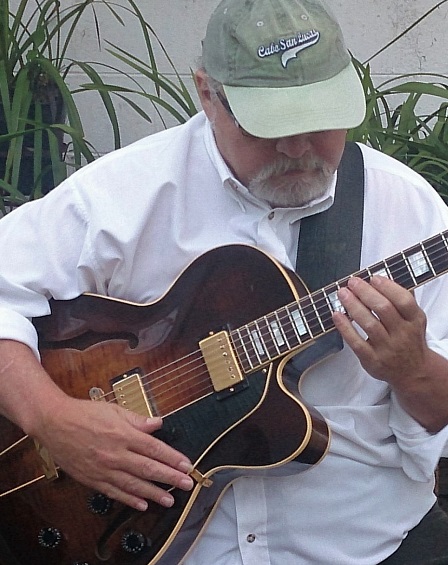 Blues speaks truth to power. I believe that Blues is a place where people from all sides of the human experience can come together and enjoy and feel the power of the Blues and forget about all else for a little while.

"I would have to say that growing up in the 1960s and 70s that I was profoundly influence by the counterculture in America…From the music and arts, to the clothing and social and political views."

Muddy Waters Newport Jazz Festival 1960…Playing in the band, backing Muddy up, at what was a magical performance. Or, to see Wes Montgomery in a small club setting before Cannon Ball Adderly discovered him. Or, to be at one of the Electric Lady Land Sessions and watch Hendrix create magic. Sorry could not just choose one.