Q&A with legendary Big Joe Fitz, one of the leading personalities on the vibrant music scene in New York

"There is no doubt that blues and jazz and dance and other African American art forms have opened the doors of understanding to the richness and the depth of black culture thereby creating understanding and acceptance."

Big Joe Fitz (Joe Fitzpatrick) is one of the leading personalities on the vibrant music scene in New York's Hudson Valley. Singer, Harmonica man, Band leader, and legendary radio personality for nearly 30 years at WDST in Woodstock, NY. Since 1985 he has hosted The Sunday Night Blues Break at legendary independent radio station WDST in Woodstock, NY. The show was recently cited by Hudson Valley Magazine in their annual 'Best of The Valley' issue. Big Joe is also a singer, musician, and bandleader. As a performer Big Joe Fitz has opened for or shared the stage with such notable names as The Holmes Brothers, Marcia Ball, Garth Hudson,  Mighty Sam McClain, Pinetop Perkins, Eddie Kirkland, Little Sammy Davis, Ruthie Foster, Madeleine Peyroux, Tad Robinson, Catherine Russell, Bruce Katz, Janiva Magness and more.  Whether on the air or on the bandstand Big Joe Fitz has a warm engaging style that never fails to connect with the audience. 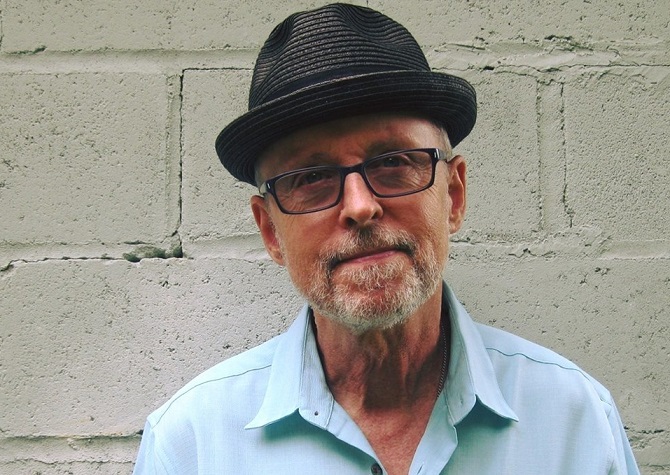 He and his band The Lo-Fi's delight in bringing 'soulful swinging blues' to all sorts of venues in The Hudson Valley and beyond. His debut album, This Is Big (2010), was released back in 2010. His latest release, Shoulda Known Better (2016), follows a similar formula to This Is Big, being a collection of blues and soul covers, played with deep emotional honesty combined with an easy-going vitality.

I’ve learned that I’m at home here in Blues World, that the music creates deep connections and that if you feel it, if you resonate with it…then you belong.

Originally of course it was the African American music born of oppression and struggle but I think it has expanded in a sense and has become a music that speaks to all people because of its honesty and the universal appeal of its deep feeling [perhaps similar to rebetiko?] As Willie Dixon famously said: “The Blues are the true facts of life”. Or in the words of Otis Spann, and this is a more poetic summation of the same thing: “The Blues ain’t nothing’ but a botheration on your mind.”

I came of age in the 1960’s when blues first came to the attention of mass culture (white culture) so this had a huge effect on me. While there were many missteps along the way, there was also a great awakening in terms of ideas and the embracing of diversity which has taken us forward…although when you look at conditions in the world today…sometimes it’s hard to see it. 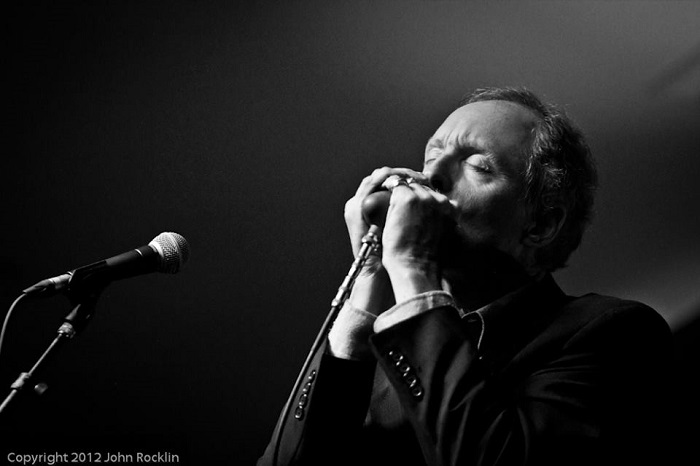 "I’ve learned that I’m at home here in Blues World, that the music creates deep connections and that if you feel it, if you resonate with it…then you belong." (Photo by John Racklin)

How do you describe Big Joe Fitz sound and songbook? What characterizes your music philosophy?

Well, people want you to have a category, or a neat little way to describe yourself, it’s really not that simple but my usual response is to say that we call our music ‘Soulful, Swinging, Blues’ because we incorporate all those elements into our style. There’s more than that of course, Country music is in there as well as Gospel and even traces of Latin music. We call the band The Lo-Fi’s because we try to play at a pre-rock era volume. The main thing is always to connect with the audience not to bash them over the head. I always say ‘Blues is an interactive sport’.

I’m not a songwriter but we take songs that we like (there are so many!) and attempt to make them our own. The songs can be from almost any genre: blues, jazz, pop, rock. We bluesify them and give them The Lo-Fi treatment.

What has made you laugh and what touched (emotionally) you from The Sunday Night Blues Break at WDST in NY?

It was a privilege and an honor to do a weekly radio show for 30 years. Radio is such an intimate medium, you connect deeply with the listeners, most often in their homes, in their bedrooms, in a one to one situation (My show was broadcast late on a Sunday evening). Sharing this music with people and turning them on to things they might not have been aware of (just as I was turned on years back) has been a great joy. I often meet people who tell me they listened all the time, others tell me they still have tapes of the shows…it’s a very gratifying experience. It has opened a lot of doors for me.

Speaking of Blues nostalgia, I once offered a prize (a box of CDs!) if anyone would name their newborn baby Caledonia. Sure enough someone took me up on it. A few years ago the band played at Caledonia’s High School Graduation Party! She has grown into a lovely, lovely young woman…it’s funny how things go sometimes.

In July of 1966 I was 17 years old. I had just walked onto the grounds of The Newport Folk Festival. It was a brutally hot afternoon and I was drinking a can of orange soda. I saw a large man in a black suit trudging down the dusty path in my direction, he had his hand extended asking for a drink [actually I’m quite sure he had had several drinks already]. It was Howlin’ Wolf. I offered the can to him and he drank it down in one long gulp. Then he said “They call me The Tail Dragger ‘cause I cover my tracks” and with that proceeded to walk on down the road. These are the things that you never forget. 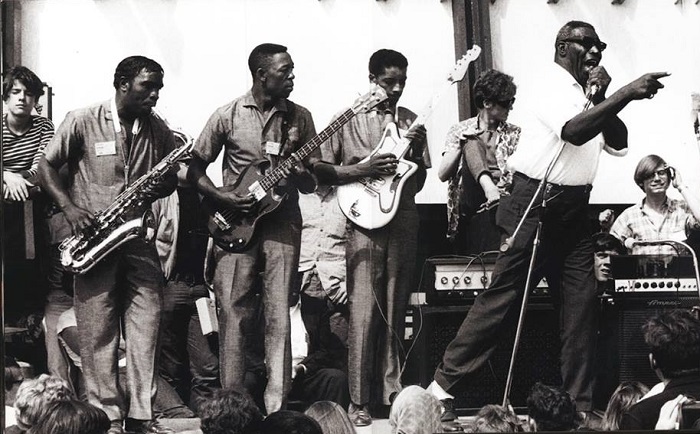 This photo (Credit: David Gahr) was taken later that same day. I have enlarged it and looked carefully to see if I could find myself…I know I was there…but so far no luck.

Several years later I made it to this festival (Poster): As you can see the lineup was quite incredible. In those days it wasn’t hard to slip into the back stage area, the event was out in a field and there was nothing but a rope blocking it off. I ducked under the rope and soon found myself on a flatbed truck sitting next to my greatest blues hero Lightnin’ Hopkins as he waited to go on. Again, these are the things that one never forgets. 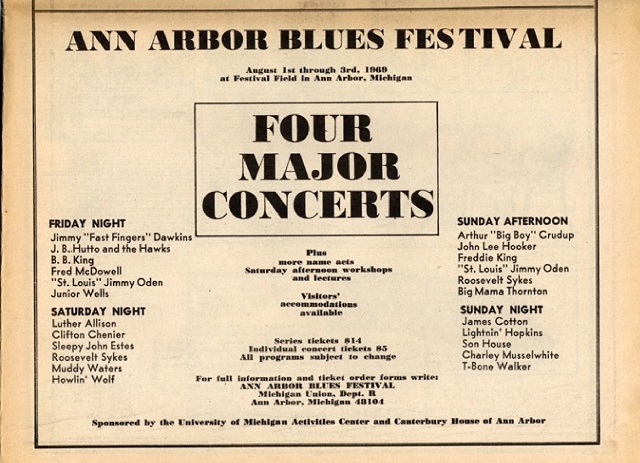 Later when I had the radio show I got to interview and spend time with many blues greats. It’s like one day I’m a kid in my room listening to BB King Live at The Regal…then fast forward 20 years and I’m the guy on stage that’s introducing BB King. That’s like, WOW, You know?

The best advice is the advice that I finally gave myself…to believe in myself and to never let myself think that I am not good enough.

Well as I said earlier, when I found myself opening for or sharing the bill with artists that were heroes of mine it was like a dream come true, people like Tracy Nelson, Bobby Rush…and in some cases these people, such as Popsy Dixon, Wendell Holmes, and Mighty Sam McClain are no longer with us which makes the memories all the more precious.

Over here in The USA we have folks that dress up in Civil War uniforms, or Revolutionary War uniforms and participate in ‘reenacting’  various battles and historic events. We are all nostalgic for the glory days of the blues and tend to mythologize them to a certain extent. That’s natural and that’s fine, but I don’t want to get trapped into being a ‘Blues Re-enactor’. The music is a living, breathing thing, always changing, always growing. I’m just happy to be part of the flow.

I’m not worried about anything in that regard, take a look around and there are so many brilliant artists everywhere. I’m a man of faith and I believe that the musicians and artists will lead us forward just as they always have. "I’m not a songwriter but we take songs that we like (there are so many!) and attempt to make them our own. The songs can be from almost any genre: blues, jazz, pop, rock. We bluesify them and give them The Lo-Fi treatment." (Big Joe Fitz on stage / Photos by John Racklin)

Maybe everything wouldn’t have to be so loud?

There is no doubt that blues and jazz and dance and other African American art forms have opened the doors of understanding to the richness and the depth of black culture thereby creating understanding and acceptance. I’m living proof of that. Even though I grew up in Manhattan in New York City the circles that I travelled in were almost exclusively white until I had my ‘Blues Awakening’. As John Lee Hooker has said: ‘Blues is The Healer’!!

Hmm? The past can be a scary place…maybe I’d want to go back to biblical times and see the whole Jesus thing for myself…or maybe I’d go to Ireland 100 years ago and see what the world of my father was like? In a blues sense I think I’d go to Central Avenue/Los Angeles in the late 1940s when West Coast Blues was emerging and there was a whole street full of swanky nightclubs.

Or…I might just want to go back to my own younger days and try to figure out why I was such a knucklehead. 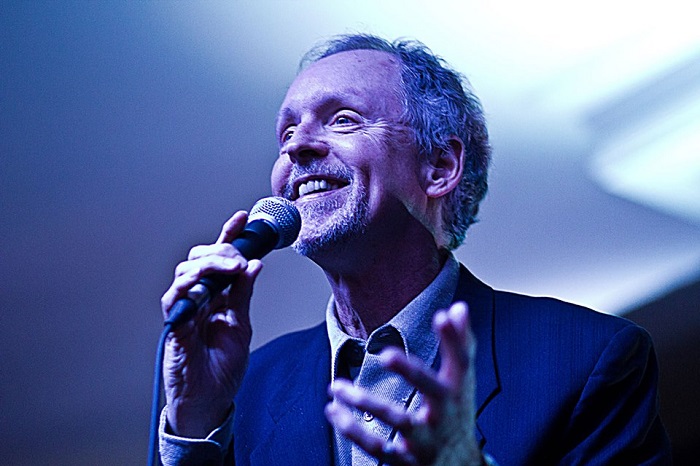