Q&A with legendary Cuban musician Eliades Ochoa - one of the most important Cuban soneros of all times, a remarkable defender of the Cuban traditional music

The Soul & Heart of Cuban Music

Hailing from the countryside near Santiago in the east of Cuba, Eliades Ochoa's roots are in guajira (Cuban country music) and his trademark cowboy hat and penchant for wearing black have led some to dub him 'Cuba's Johnny Cash'. Born in 1946, Eliades began playing the guitar when he was six, making a living playing in the cafes and brothels around Santiago de Cuba. Such was his local reputation that in 1978 he joined Cuarteto Patria, becoming in 1982 the leader of the legendary group that has been keeping the tradition of Cuban folk music alive since 1940. Not long before he was recruited for the Buena Vista Social Club album he had been working with Compay Segundo reviving the master's career and recording the first version of Chan Chan with him, also touring together in Washington, Guadalupe, Dominican Republic. 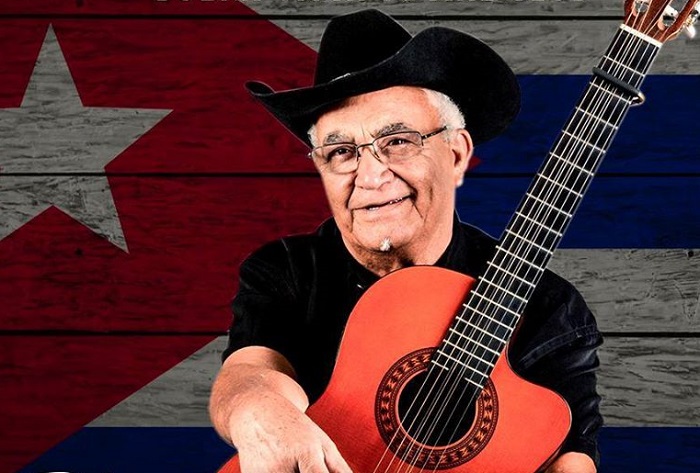 Eliades was one of the key members of the original Buena Vista Social Club project, album and film that won the Grammy Awards as Best Tropical Latin Performance in 1997. In the meanwhile the guitar and voice of Eliades Ochoa become a worldwide symbol of the Cuban Son (Son Cubano), traditional music from Santiago de Cuba. Eliades Ochoa is considered one of the most important Cuban soneros of all times, a remarkable defender of the Cuban traditional music and the finest guitarist of his generation. Ochoa keeps on creating and composing music, tours regularly yearly and of course continues performing in his favorite and loved Casa de la Trova in Santiago de Cuba once in a while. Eliades' latest album titled "Vamos A Bailar Un Son" (2020).

How has Cuban culture, music and heritage influenced your vision of the world and the trips you have taken?

I think so. Very good. All very well because it has influenced knowing another cultural world. See how the message arrives through the music, how the message reaches another audience, other people, that other messages in other languages, even well. They are strong things that one realizes and I think that …… yes.

How would you describe your sound, musical and song philosophy? Where does your creative drive come from?

Well, first of all, I come from a musical family, the first impulses, my father and my mother who play instruments both. And my guitar has a different sound because it is a creation looking for a sound that I finally found, which is a creation of Eliades Ochoa, my guitar is not like the other guitars. Bring a different harmony in each note. All my guitars are like this, with eight strings with different strings. The network is not a network, it is another, it has another sound. The bi is not a sept, it is a re that sets b. If it was, look, and find it. My guitar sounds different from all guitars.

What meetings have been the most important experiences for you? What was the best advice someone gave you?

Boy, if I am going to tell you the advice, the advice, that I have followed and will continue a lifetime come from my family, they come from my father. They come from my mother. Advice that you have to be serious at work, that you have to be polite, that you cannot be disrespectful. That one can get where he wants but walking with a path of seriousness and good work. The work has to always improve it. He can never think that you are already doing things well done. That you already made them well done. You always have to think that they can be improved. Yes, that kind of advice from my parents, that has gone well for me and I will continue to be the Eliades that I am for a lifetime. 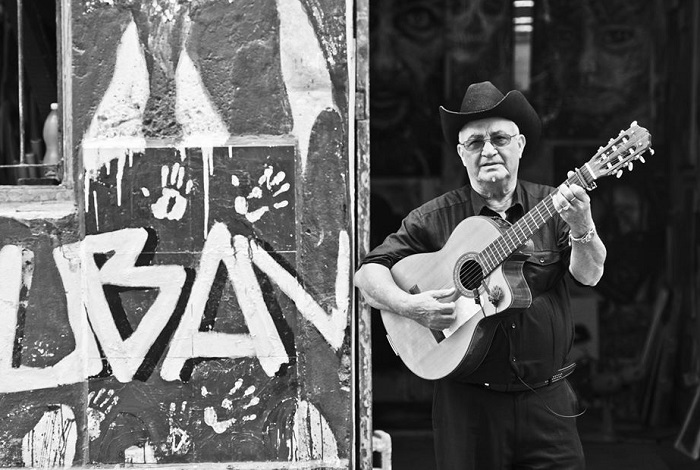 "I think so. Very good. All very well because it has influenced knowing another cultural world. See how the message arrives through the music, how the message reaches another audience, other people, that other messages in other languages, even well. They are strong things that one realizes and I think that … yes." (Photo: Eliades Ochoa, Havana Cuba)

What do you miss most about the music of the past today? What are your hopes and fears for the future?

If you could change one thing in the musical world and it came true, what would it be?

What are the lines that connect the music of "Son" with blues and other popular and traditional forms from all over the world, Mali, Senegal, Tango, Flamenco?

I like merengue, but I like old merengue. The old merengue although I am going to be honest with you, I like all the old music of the countries. I hear good music, I recognize it, I know it is good music, but I like old music. I like the plains, Venezuela, South American music, I like everything. All And so for fate. And it is infinite because I recognize the strength it has. But I don't change it for a second. 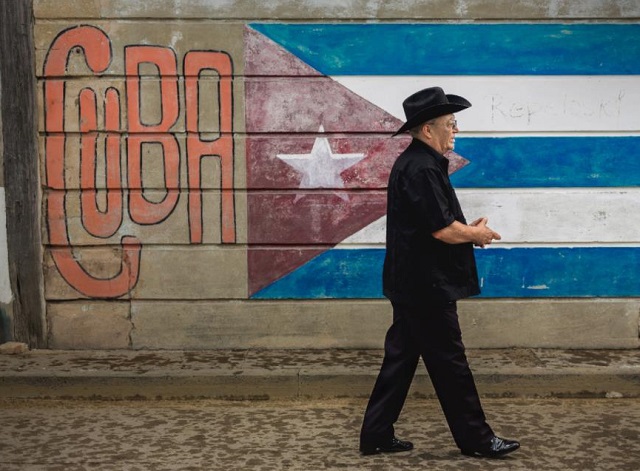 What are some of the most important lessons you have learned from your experience on musical routes?

I have learned, I have learned, I have had the school, the school that you have to do what you are going to do. And what you are doing you have to do it thinking more of the public than you. Because sometimes you are playing in a place that the place has a not pretty façade, it is not beautiful, it is not pretty, it is not protocol, but nevertheless of the people who are going to hear you there are people who are far above what you you can imagine yourself inside art. There are people who are wise. They are wise of the music, of the art, and what you can ask them they know how to answer you with professionalism. And you cannot guide you because the place where you go to play has an ugly aspect. Because those who are inside have tremendous level. I'm talking about an incredible level. And then life teaches you that you cannot think that the guitar is beautiful. If the guitar, if the guitar is ugly you play it well the music comes out beautiful. If the guitar is pretty and you don't know how to play the guitar, it's bad and the music is ugly.

Let's take a trip with a time machine, so where and why would you want to go for a whole day?

But to pass it of pleasure. Like a special vacation. I would like in the future if I could do concerts but do concerts for those who cannot go to concerts charging. I would like to do concerts for children. I am a little weak of feelings and I see a child crying because it is because the mother treats him badly or because he wants something that he cannot get. I see a child crying and I already have a very bad day. Very bad. That is a bad day I have. And I would like these children to have a bit of a special space. The world in which we live is not relevant but well, it is not relevant but I know that the world is not, it is not the normal world for the children. The children I am thinking of do not have the ease of many things that they would like. We are not going to continue talking about this because this is very long. 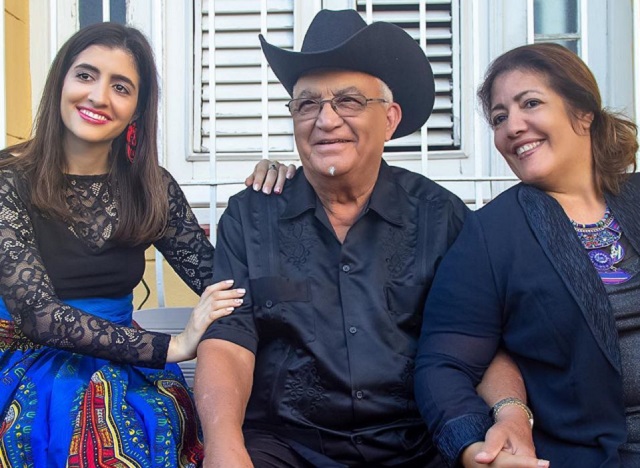 What does « Family» mean to you?

The maximum. The maximum and when it is a well-run family, obviously it is the maximum. We, when I say us, speak of the Eliades Ochoa family. I speak of brothers, mothers, fathers, children, grandchildren, wife, family. So far life has changed somewhat, not much. It has changed because you know that time is forcing you to go around the world doing things, making consciences, making contracts and away from family. But we always had the custom of Saturdays, on weekends, on Sunday, almost all the Ochoa Eliades family met, in the old people's house, of my father and my mother. There they met, my wife, with my children, my brothers with my nephews, with my sister, we always met at home. In the house that was, the family home. But, uh, I remember. Many memories.

Mr. Ochoa, what is happiness for you?

Happiness for me is to receive the applause of the public, the embrace of the public, that the public congratulates me, greets me. That what I do reaches the public and the public stays with what I do. But let him stay with what I do because he likes what I do and not for compliance. That is happiness. Happiness is knowing that you have health. That I have health. That Evora, my daughter is healthy. Who talks to you and agrees with you to do the interview. This that we are doing is coordinated by you and my daughter Evora. So that's happiness.

Last question : Who was your best friend at Buena Vista Social Club?

We become a family when I say us, I speak of El Guajiro Mirabal, I speak of Ruben Gonzalez, I speak of Compay Segundo, of Ibrahim Ferrer, of Cachaito Lopez, of Juan de Marcos González, Guasdualito Torres, of Eliades Ochoa, at least captain of this ship. Because it is the truth and then good. I cannot select one over the other. We were all a family. What one was going to do was conferred with the others. We met and agreed with what we were going to do that the managers of the record company had asked us to do the work we had agreed to do. We were a family. We weren't friends. We were family. 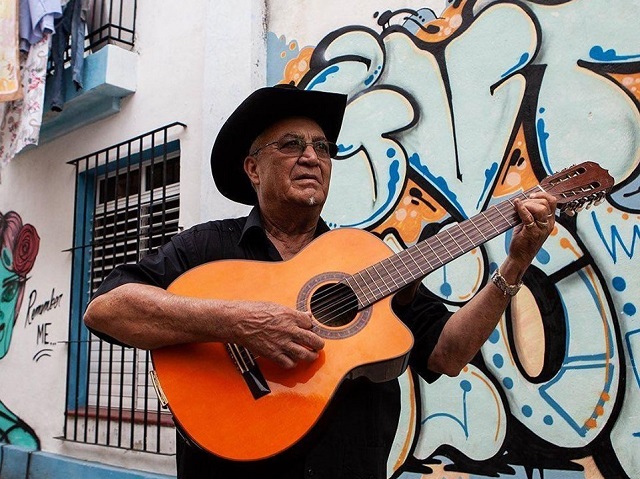