"I’ve learned the hard way not to self-righteously fight against every small thing I don’t like. More “go with the flow” if I can. And sometimes it’s better to be kind than to be honest. I try to choose my battles more now than I did 30 years ago."

Bob Margolin is a Steady Rollin’ Blues guitar player and singer who tours worldwide with his band, solo, or as a featured guest. He delivers original songs and the spirit of Chicago Blues that he learned onstage and recording in Muddy Waters’ band from 1973-1980. You can see him with Muddy and The Band in the Last Waltz film from 1976 all the way to live in the all-star 2022 Last Waltz shows by Blackbird Presents. Bob is known for his slide guitar, powerful vocals and the sound, stories and time travel of his experiences and with the legends he knew. Bob’s new album is "So Far" (June 2022 / VizzTone), with harp master Bob Corritore. Already well-known in the Blues World, Bob Margolin and Bob Corritore collaborate on an acoustic duo album for the first time. Special guest guitarist-vocalist Jimmy Vivino graces two songs. Bob M wrote seven new songs and Bob C marches an original instrumental. They also cover some of their favorite songs. Bob M’s 1935 acoustic guitar and Bob C’s un-amped harp reveal personal, intimate performances informed by decades of friendship and gigs together.       (Photo: Bob Margolin) 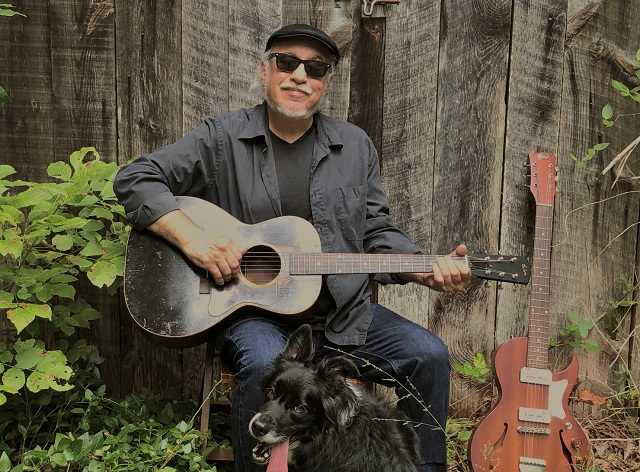 It started when Bob Corritore saw Bob Margolin playing in Muddy Waters’ band at his high school in 1974. Now here they are, So Far. Bob is touring now. The 2022 Last Waltz May shows feature Warren Haynes, Don Was, Grace Potter, Jamey Johnson, Larry Campbell and more. Bob also does duo shows with Jimmy Vivino, “Just 2 Guitars & 200 Stories,” intimate and entertaining. He plays festivals with “The Bobs of the Blues” with Bob Corritore and Bob Stroger.

I didn’t see that question coming. “Counterculture” is a term from the late 1960s, when I was becoming an adult. Musicians and students were at the forefront of political and social movements. My parents were liberal, so I didn’t rebel against them. I was all for Peace and Love, Women’s Lib, protecting Mother Earth, and anti-racism progress. I knew I wanted to be a musician, and I’ve written many songs that address social issues. I thought the world was on it’s way to getting better. I’m heartbroken about today’s messes. I think being a musician is an honorable profession and I try to make people feel good with my music. Hopefully that’s a force for good in a challenging world however much it changes anything for the better.

Do you have any interesting stories about the making of the new album "So Far"?

I have a couple of stories about the songs, which I included in liner notes that downloaders and streamers might not see.

On my song “Outrage and Inrage,” my guitar part is loosely based on Robert Johnson’s “Terraplane Blues.” In 1978, at a Muddy gig, Robert Johnson’s sister brought “those” photos of Robert to show Muddy. Muddy was inspired to sing Terraplane for her and he had heard me messing with some of the licks so he told me to play the slide guitar on it. It was surreal and I’m inspired to be in that special experience.

And I’m possessed by The Band’s It Makes No Difference. I played with them and Muddy at the 1976 Last Waltz concert, and I heard The Band’s magnificent performance live. In 1982, I opened a solo show for Rick Danko, who sang it. He invited me to accompany him and we did that song together. In 1996, I was on a festival in Finland with The Band and got to know Rick much better over three all-morning breakfasts. He passed in 1999. It’s my personal thanks for the beauty of Rick’s singing, Robbie Robertson’s profound lyrics, and my friendship and appreciation for Levon Helm, Richard Manuel and Garth Hudson. I played it on open-tuned slide guitar, with Bob Corritore and Jimmy Vivino contributing.

So Far celebrates and culminates my long friendship and musical partnership with harmonica master Bob Corritore. We love the same music and covered some of our favorite Chicago Blues classics. I also wrote some new songs and Bob C accompanied and enhanced them with sensitivity, taste and creativity. 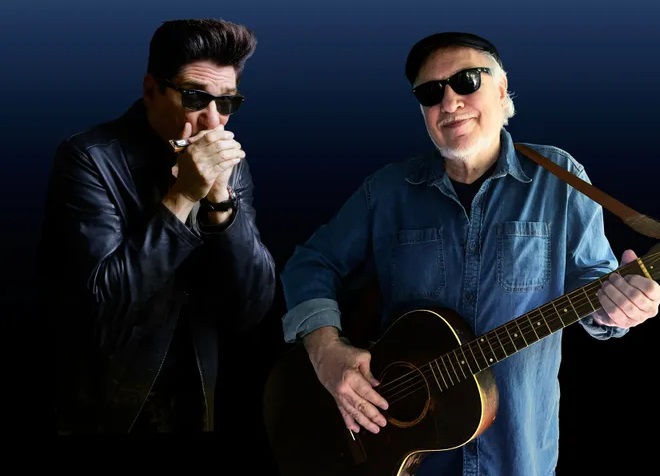 "Blues music is relatively non-commercial but those who love it really love it deeply. I hope my music moves and entertains people even as it fulfills me." (Photo: Bob Margolin & Bob Corritore)

Why do you think that the Acoustic Blues continues to generate such a devoted following?

Electric Blues-Rock is certainly more commercial than Acoustic Blues music these days, but in contrast to that, the personal, intimate sound of acoustic instruments without bass and drums is what we wanted to express for this recording. I hope it will stand out for that and move those who love acoustic music, even to Folk and Americana, beyond Bob C’s and my Blues World.

I’ve learned the hard way not to self-righteously fight against every small thing I don’t like. More “go with the flow” if I can. And sometimes it’s better to be kind than to be honest. I try to choose my battles more now than I did 30 years ago.

What moment changed your life and career the most? What do you think is key to a blues life well lived?

Congratulations, Michael. You are the first interviewer I can recall who didn’t mention Muddy Waters prominently first. But my “Crossroads” moment was when Muddy hired me to be in his band in 1973. He had seen me play the "Old School” (his term) Chicago Blues he pioneered and was friendly and encouraging to me. I showed up early at a gig right after he fired a guitar player. He gave me a chance and put me on the road I still ride. I tried to use what I learned both to please and support him and as a foundation for my own music. Even as I write my own songs, not always in strict Blues form, I try to honor Muddy and his influence on me is to the bone. I fully appreciated, then and now, that I had a rare opportunity to learn like a Middle Ages apprentice from a master.

Blues music is relatively non-commercial but those who love it really love it deeply. I hope my music moves and entertains people even as it fulfills me. 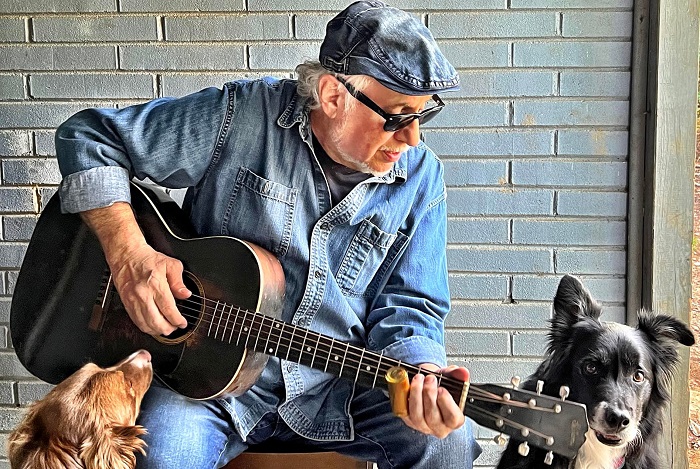 "Electric Blues-Rock is certainly more commercial than Acoustic Blues music these days, but in contrast to that, the personal, intimate sound of acoustic instruments without bass and drums is what we wanted to express for this recording. I hope it will stand out for that and move those who love acoustic music, even to Folk and Americana, beyond Bob C’s and my Blues World." (Photo: Bob Margolin)

I miss the legendary Blues musicians I got to see or play with. Time has taken almost all who were born in the early 1900s. They can’t be replaced, only honored. Their spirits are alive inside me, but nobody will, for instance, ever stand right next to Muddy and play his Blues with him again.

The good news is that fans or young musicians, like those I meet as Musical Director of the Pinetop Perkins Foundation Masterclass Workshops, can type “Muddy” into their phone and read everything ever written about him and find every video. It wasn’t possible for me to learn and find my life’s direction like that when I was young. The real thing was there, and I was lucky even as I was dedicated.

I hope, and it’s happening, that young musicians who are “Chosen” by Blues, will find their way to their own Deep Blues. I hope, as Muddy told me he wished, that young African American musicians would carry his style forward within their own. That is happening too and Amen for more.

People who love Blues music have a lot to enjoy now and in the future.

Good question. On social media, where many battles are fought, there is much controversy over what is Blues, who can play it, and fairness to African-American musicians commercially and in its presentation. Passions and opinions are jagged. I hope that the human, soulful Blues music can bring everyone together and be a force for peace, brotherhood, and sisterhood in this mean old world.

What has been the hardest obstacle for you to overcome as a person and as artist and has this helped you become a better blues musician?          (Photo: Bob Margolin) 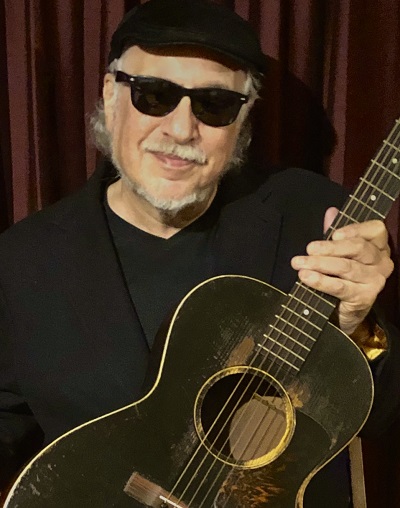 Stepping back for perspective…sometimes people ask me to do something “when I have time.” I am Time Challenged and in Time Debt. When I was in Muddy’s band, all I had to do was be punctual and play my best. The rest of the time, I indulged my social life.

Since becoming self-employed in 1980, I have literally not had a day of vacation (I take a nap if I can). There’s always something I should be doing. Today, I think this is happening to many people, even if they’re not trying to accomplish something. Just “Adulting” is hard enough, with modern obstacles and cascading problems.

But I am trying to accomplish what have always been my career/life goals: Simply to make the best music I can, be respected and to make a living from it. And as I said in my new song from So Far, “Blessings and Blues” —"I’m living ’til I’m clock-blocked.” I wish everyday life was easier, it’s not for me or anyone else I know. Music soothes, heals and inspires us.