"I think the impact of music on the world is understated, undeniable, and incalculable. All peoples find joy from making and listening to music. I want my music to make people happy and deeply think."

Over the last quarter century, Long Island singer/songwriter Chris St. John has truly led a diverse and successful professional career in the field of law as a prosecutor, judge and practicing attorney. Now, his dream of lateral success in the music business is starting to become a reality, as his debut LP, “I’m Dreaming” (2021). The album includes 13 original songs plus a cover of “Peggy O’” and a musical score that connects two compositions. Chris St John’s music draws from multiple genres, utilizing an array of instruments. Each song leaves the listener intently waiting for the next surprise. St John cuts his own path though, making the music uniquely his own. The topics include the loss of love at a young age; the loss of his parents; the birth of his son John (now 18) and life with his wife of 27 years Elisabeth; a surprise DNA discovery; a serious illness where he was put in a medically induced coma, and a nurse sang him back to life; the loss of a young relative in a car accident and the subsequent climb out of depression; alcohol addiction and recovery; and a gift from his grandmother that he intends to return to her someday. 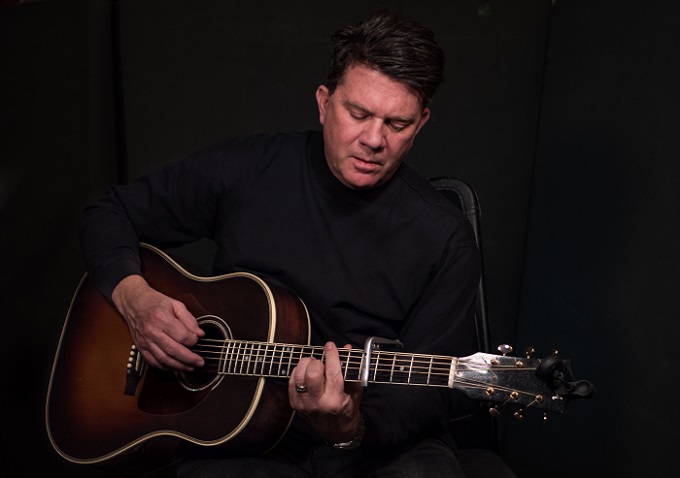 Chris also worked in the State Department, participating in the Reagan-Gorbachev Summit in 1987; and lived, studied, and taught in China later that year. He was also a Congressional Aide and is now a volunteer firefighter. In 2015, he and his friend started a not-for-profit charity called HALO Missions, which provides medical care, clothing, food, farming equipment, and surgeries for AIDS orphans and the extreme poor throughout Africa, Central America, and the Caribbean.

I’ve always loved Americana and Folk, in addition to many musical genres. I think my travels around the world, listening to different music, helping the extreme poor, have influenced the way I listen to and create music. Having lived in China, travelled to many continents, and doing charity work with AIDS orphans and the extreme poor changes you. It gives you a sense of gratitude, empathy, and a connection to God that is permanent allowing you to express yourself openly, honestly and fearlessly.

What do you hope people continue to take away from your songs? Where does your creative drive come from?

I hope people find joy in my music. I hope that my honest expression of my weaknesses, faults, failures, and sadness are relatable to people in a way that makes them feel they aren’t alone. I also help that they take the joy, perseverance, and gratitude that the album keeps coming back to, despite life’s setbacks, and that inspires people to join me in getting back up on our feet when we’ve been knocked down; to dream and never give up.

What characterize your debut album “I’m Dreaming” songbook and philosophy?

My professional career is what I do. These songs are who I am. They are about my personal life. The songs have been written over about 30 years, with four new ones written in the last several months to finish up the album. The title of the LP is ‘I’m Dreaming’ because some of these songs were dreamed in my sleep and written down when I awoke. Others came from daydreams. There are so many references to dreaming in the album. I guess I like to dream. People have told me I should write a book or make an album. This is both to me. 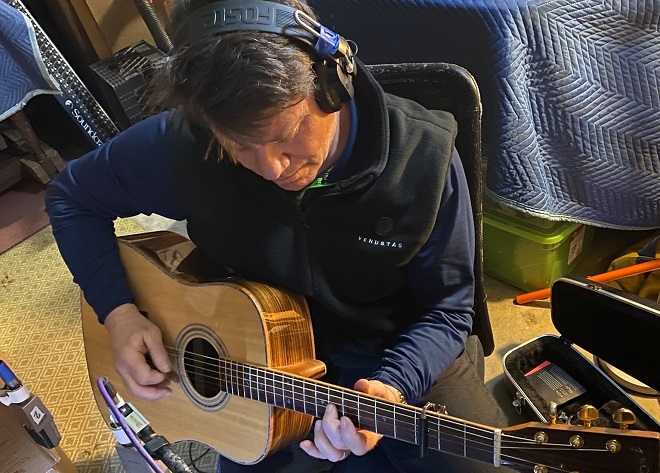 "The key to a life well ivied in my opinion is to serve others, be grateful, to persevere and follow your dreams. Live goes so quickly, I don’t want to leave anything on the table." (Photo: Chris St. John)

Why do you think that the Grateful Dead's music continues to generate such a devoted following?

It starts with the songs. Robert Hunter was a master lyricist and he and Garcia wrote beautiful songs together. The group was so gifted musically. Jerry Garcia was a once in a lifetime musician with a way to make you feel what he was feeling when he sang and played. Bob Weir plays rhythm guitar unlike anyone I’ve ever heard. Some nights the band had an off night with a few moments of brilliance. Then there were the nights that were pure magic. The fans were forgiving, leaving the band to take chances. One concert wasn’t enough because every concert was totally different. The scene is like none other. People are happy and generous, and from all social classes, together with the same purpose – to celebrate life and to peacefully co-exit, even if for only a few hours.

Collaboration. Real song writing and singing. If you listen to the 1940’s through the 1980’s there was something for everyone. Gorgeous songs from country artists, big bands, Motown, Rock and Roll, Soft Rock and Super Bands. It was a time that is unsurpassed for me. During the time I described, music went from innocence to an honest look at life. I’m afraid we are losing sight of the importance of collaboration and of real instruments in music. What is commercially successful today does not suit my taste. There is still beautiful music being created by tremendously talented musicians, but I’m afraid the platform for that is way too small.

How started the thought of HALO Missions? What touched you from AIDS orphans and the extreme poor kids?

I was very sick about 15 years ago. I was in a medically induced coma. There are two songs on the album that touch on that experience. On one, the nurse who sang to me while I was in a coma sings on the album. I was so grateful to God I endeavored to do his work. I enlisted one of the doctors who treated me, Dr. James Bopp, MD, we became close friends, and he and I started a charity to help the extreme poor. None of us takes a penny, we donate our own money, and pay all of our own expenses. We’ve treated orphans and the extreme poor in Africa, the Caribbean and Central America. We’ve treated thousands of patients, performed hundreds of cataract surgeries, provided necessary assistance so hundreds of children can go to school, and created a cistern and farm irrigation system for an entire village in Zambia. The work brings a lasting joy, unlike material things or things that please the senses. It’s a lasting joy like none other.  Our charity is at Halo Missions;           (Photo: Chris St. John doing mission work in Zambia) 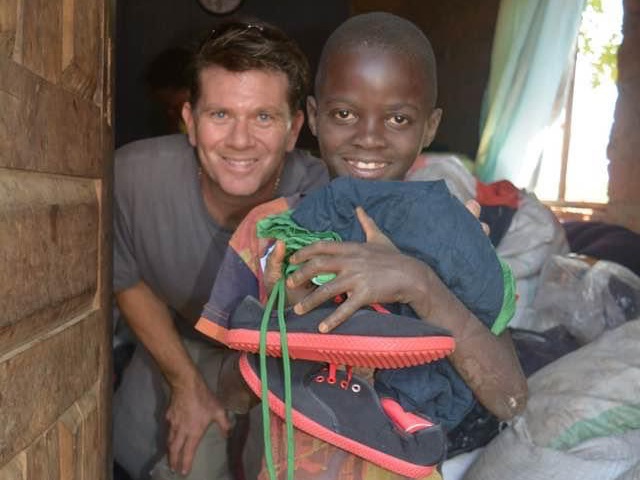 "Having lived in China, travelled to many continents, and doing charity work with AIDS orphans and the extreme poor changes you. It gives you a sense of gratitude, empathy, and a connection to God that is permanent allowing you to express yourself openly, honestly and fearlessly."

How does activism affect your inspiration? What do you think the major changes will be in the near or far future of the world?

It’s in an indirect way. It affects me, which affects my music. One day on the next mission trip, I want to talk to some of the children we’ve helped 7 or 8 years ago. Talk about their lives, learn who they are and hear their stories, and then write a song through their eyes.

The future is uncertain, but I’m not comfortable with violent and fast change; particularly when it is advocated by those with few life experiences and accomplishments. I hope that we don’t lose our liberties, our history, or our right to free speech. These are all the bedrocks of a healthy democracy and of our Republic. As a student of history, political science, and the law, I know about the sacrifices made by those who came before us, from the Revolution to present, that are responsible for all we enjoy. I’ve seen the rest of the world. We are lucky and should give thanks. That doesn’t mean we can’t improve things, but I think so many imperfect people living today expect perfection from those who came before us and are no longer with us. That is unrealistic and unfair. We celebrate our heroes for their accomplishments, not their failures. We can recognize their imperfections, disapprove and learn from them, but people’s lives are complicated, and the doers of the world are usually a mix of overachievers, advancing humankind on some level, with character flaws of moral failures and human sins. I think young people need to learn that. As John Lennon sang, “When you talk about destruction, don’t you know that you can count me out.”

What are some of the most important (life's) lessons you have learned from your experience as a judge and prosecutor?

I am most proud of the fact that I never let my title or position change my heart, soul or sense of fairness. I took very seriously the fact that my positions were temporary and that the people put me there to do their work for them, not to enhance my standing or finances. Every day I worked my hardest to live up to those expectations. I set the tone in the courtroom and made sure everyone on my staff treated all people with dignity and respect. The first thing I did was take down the government seal from behind my chair and put up a sign I purchased with my own money: “In God we Trust.” 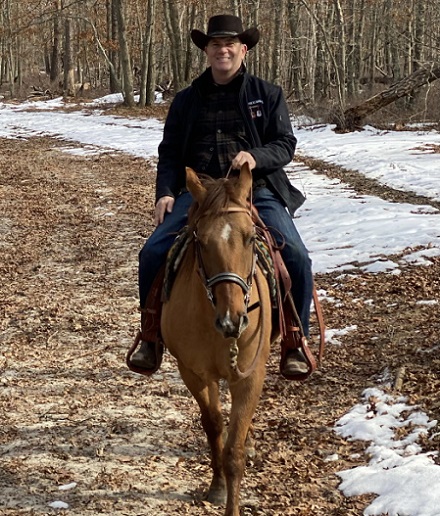 I think the impact of music on the world is understated, undeniable, and incalculable. All peoples find joy from making and listening to music. I want my music to make people happy and deeply think.

"I hope that we don’t lose our liberties, our history, or our right to free speech." (Photo: Chris St. John)

What was the best advice anyone ever gave you? What do you think is key to a life well lived?

My father taught me how to ask for a job and that you owe your boss your complete loyalty. He told me as long as the boss wasn’t asking you to do anything illegal or immoral, to get the job done and done right. He taught me no job was below me, and that if you are unhappy, give the proper notice, and leave on good terms. It’s why I moved up the ladder, getting great help and recommendations from virtually everyone I worked for. I made so many contacts and advanced because of that great advice. My parents taught me how to live by example as well. I had the best.

The key to a life well lived in my opinion is to serve others, be grateful, to persevere and follow your dreams. Life goes so quickly, I don’t want to leave anything on the table.