"Art is the "spoonful of 'sugar'" which helps the "'medicine' go down." Always has been. Society learns about the world through Art. A very effective means of delivering messages. Can be used for good or evil, but it has done a lot of good."

Writer, Vocalist, Performance Poet, Percussionist, and Dancer Chandra Washington has enjoyed over 30 years of studying, performing and choreographing traditional West African dance from the Ancient Mali Empire era. In addition to performing African dance, she also specializes in an improv style combining modern dance expressions with movements from the African Diaspora. Her earliest dance training took place while studying at the University of Maryland, where she joined Improvisations Unlimited, directed by Miriam Rosen. With a background of modern and improvisational dance, her dance focus changed in 1978 upon meeting Assane Kounte, who at the time was acting choreographer for Wo'se Dance Theater in Washington, D.C. She trained and performed with Wo'se for 2 years, eventually teaching community classes. During this period, she also began a longstanding relationship as a freelance dancer with the legendary Sun Ra Arkestra. Chandra also received invaluable training from the now defunct International Afrikan-American Ballet of Brooklyn, N.Y., with Hazel Starks-Bryant as primary teacher of the dance and its history. She also trained and performed with jali Djimo Kouyate's Memory of African Culture in D.C. as a dancer and vocalists, singing in the traditional Malinke language. In 1980, she co-founded Cosan Arts Ensemble in D.C. 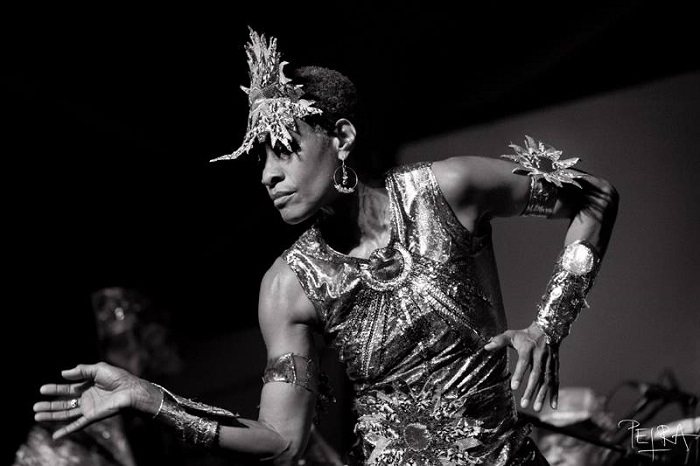 While in Richmond, Virginia (1985-‘90), Chandra served on the Adjunct Faculty of Virginia Commonwealth University's Department of Dance & Choreography as instructor of their advanced-level African dance course. After 5 years in Richmond, Chandra returned to D.C. in 1990, joining Assane Kounte's KanKouran, where she performed for 2 years. While residing in Honduras, Central America in 1996, Chandra conducted a special African dance workshop for the country’s national company, Danzas Y Teatro Folkloricas Garifunas. An Austin, Texas native, Chandra inherited her musical ear from her mother. She did not begin singing publicly until the early ‘80's, performing background vocals in lingala with an East African dance band, Bantu in Washington, D.C. It was during this period she began singing with Sweet Honey in the Rock’s a capella vocal workshop In Process... She also sang in Malinke language and danced for the performance group Memory of African Culture. Participating in a jazz vocal workshop hosted by D.C.'s jazz vocal icon Ronnie Wells, Chandra competed in the 2nd Annual East Coast Jazz Festival Vocal Competition as a semi-finalist. Chandra returned to Austin in the early ‘90's. She sang background for several local Austin bands. As a percussionist, she never received any formal training. She learned through natural rhythmic ability, merging her exposure to complex Senegambian polyrhythms as a professional dancer with ear training, observation, and playing.

What do you learn about yourself from the Jazz music and poetry? What does the blues mean to you?

I learn how creative I can be as a "jazz" vocalist and improvisational dancer; exploring the possibilities within me is liberating. When I wrote poetry, it was a time for me to document my life and things affecting it; was very therapeutic but I stopped when I noticed much of my writings supported what I call "victim consciousness." Serendipitously, I reviewed an entire stack of poetry I've written over the years; I don't do projects (my own) unless I have a personal statement to make, and an artistic vision to express it, so I sought inspiration through review of my past thoughts -- to assess my growth and to possibly revise material for future project. The blues is what I consider the modern-day expression of the essence of African expression.

What were the reasons that you started the artistic researches? How do you describe Healing Caravan philosophy?

Not sure I understand the question, but what I can say is, I decided at age 3 I loved performing and artistic expression in the area of performing arts. As far as Healing Caravan, the idea was originally spawned by Hamiet Bluiett; he and I were friends of healer Dr. Sebi. A performance of Bluiett's trio at the Jazz Bakery (believe it was 2003) included Sebi verbally "riffing" over the music on subjects related to health/healing. I pressed Bluiett to put a formal Healing Caravan performance in motion; the first official performance occurring in my hometown of Austin, TX a few years later with my original poetry, dance, and Bluiett leading a trio of some of my favorite Austin musicians. After that performance, Bluiett stepped down as Artistic Director and turned the project over to me. I performed 2 different versions of the installation after the premiere performance. The performances were multidiscipline, about 90% improvisational, and included dance, live music, spoken-word, and visual and audio media, expressing physical, environmental, and emotional aspects of healing. The last installation opened for the iconic group, the Last Poets. 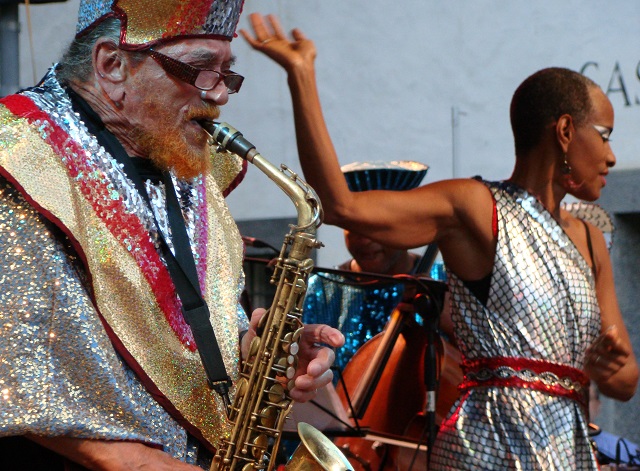 "As a female musician in a male-dominated performance setting, I've run into situations where there are preconceived notions of how someone of my "profile" is supposed to be. But the more they interact with me, I gain their respect. The status of women in music is, we're more than "chick singers" who come in/out on cue." (Photo: Chandra & Marshall Allen of Sun Ra Arkestra)

- "You're the only one in the room"; "Don't celebrate birthdays, celebrate Life Every Day." ~ Veronica Hunte

I miss Original Thought in music. Today's music/musicians (popular music) sounds pretty-much the same. In popular music, it all seems to be about "the hook"; no storytelling; no bridges or creative song structure. I miss that. I hope musicians of today (younger ones) will begin to value the artistry of artists who have come before them and not copy but expound upon their artistry. The music known as "jazz" has moved away from being The People's Music; I believe partly because appropriation of the art form by those who have no depth in its origins has caused The Music to take on this sterile, "intellectual" moniker. I'd like to see folk get back to music that inspires one to get up and dance like Monk would do in the middle of his sets.

The abolishment of money/the monetary system. It is the great divider, in my opinion, creating the society of "haves" and "have nots."

What has made you laugh from your experience with Sun Ra Arkestra? What touched (emotionally) you Sun Ra music?

I was 22 when I joined the Arkestra. One of my fondest memories in the early days was June Tyson. She was the one who basically "groomed" me; she outfitted me from items Sonny had in a suitcase. I loved her so much, and was devastated to learn of her passing. Anyway, a few days before thi particular gig, I had the misfortune of being involved in a domestic violence attack. My lip was busted and I had swelling on the right side of my face. I showed up to the gig swollen in the lip/head. Naturally, June asked what happened. I told her of the fight and she replied, "You better learn how to DUCK!" What touches me emotionally is the Arkestra recording, "Possession" from the "This is Sun Ra" LP (later released as "Sun Song"); in fact, the entire LP is one of my favorites. Emotionally, the saxophone solos of the late great John Gilmore touched me deeply; I feel so special not only to have known him, but also to have the opportunity to perform with his expressions live. He was very kind to me and again, I was emotionally devastated to learn of his passing. 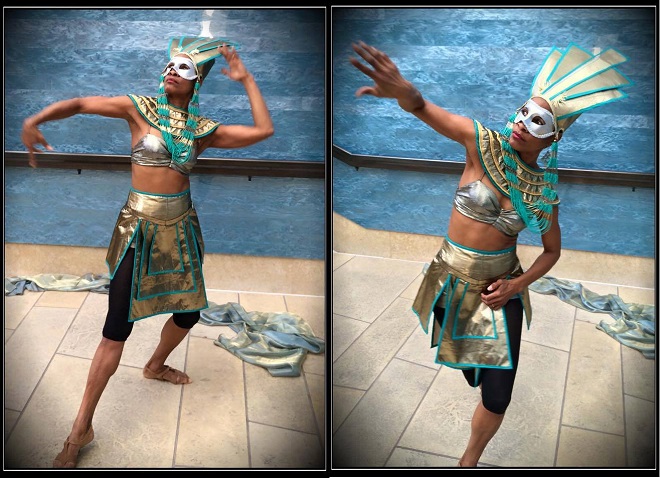 "I'd like to go back to the Usha Village in Honduras and SOAK in the thermal hot spring, then go to this amazing private land with a river/waterfall and swim NATURAL, sit under that waterfall and scream silly with delight from the water pounding on my body, swim back to a rock and sun my body. I'd go back to a  once-pristine, quiet beach there and swim and sun myself." (Photo by Mike Thompson)

How has the Afro-American culture and literature influenced your views of the world and the journeys you’ve taken?

The greatest influences I had were from James Brown (I idolized his moves and vocal expressions as a young person), Nikki Giovanni (awesome storyteller; her performance of "Ego Trippin'" with the NY Community Choir influenced my creativity as a poet/writer and performing artist, in general), the Autobiography of Malcolm X (changed my personal view of myself as a Black person), my studies in African dance (ancient Mali Empire) added to my dance vocabulary and fit my dance personality like a glove, and Sun Ra/the Arkestra for affording me the ability to express myself through my Black Artistry as Myself; it is one of the few places (other than my own projects) where I can be in communion while being exactly who/what I am.

I'm pretty unconventional in that for one, I perform with whoever has a COOL VIBE and is talented. This crosses all "lines." I have musician "family" in all these circles; with that said, there can be others in these given circles who may not be familiar with me, and make an "assessment" before knowing who I am and my capabilities. As a female musician in a male-dominated performance setting, I've run into situations where there are preconceived notions of how someone of my "profile" is supposed to be. But the more they interact with me, I gain their respect. The status of women in music is, we're more than "chick singers" who come in/out on cue.

What is the impact of music, art and poetry to the racial, political, and socio-cultural implications?

Art is the "spoonful of 'sugar'" which helps the "'medicine' go down." Always has been. Society learns about the world through Art. A very effective means of delivering messages. Can be used for good or evil, but it has done a lot of good.

I'd like to go back to the Usha Village in Honduras and SOAK in the thermal hot spring, then go to this amazing private land with a river/waterfall and swim NATURAL, sit under that waterfall and scream silly with delight from the water pounding on my body, swim back to a rock and sun my body. I'd go back to an  once-pristine, quiet beach there and swim and sun myself. 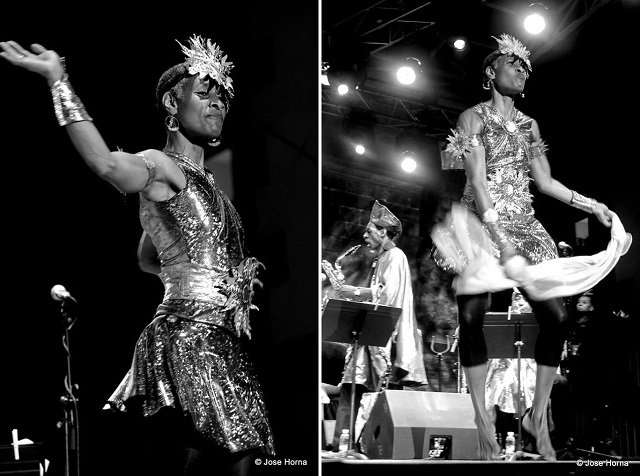