"Blues and subsequently RNR, hold a very important role, because were the sound track of the years of change, in good and in bad, anti war, anti racism, equality with a love message."

Multitalented musician, Fabrizio Grossi is an Italian-American with a prolific career as producer, mixer, and music consultant. After obtaining his college diploma in International Music Business Trades in Milan, Fabrizio moved to the US in 1991. Musically, he broken in the New York City scene and started his career as US representative, developer and A&R associate for several European and Latin American record and entertainment companies. As the first Italian born bass-player to successfully enter the international rock scene he was officially introduced to the masses by punk icon Nina Hagen and by guitar virtuoso Steve Vai. Even though he is very active with his production company, Sounds of Pisces, in organizing events, customized tours, workshops, charities, educational strategies and programs, his main role stays the one of an award winning producer, mixer, re-mixer for an extended array of blues and hard-heavy-country and pop rock artists. 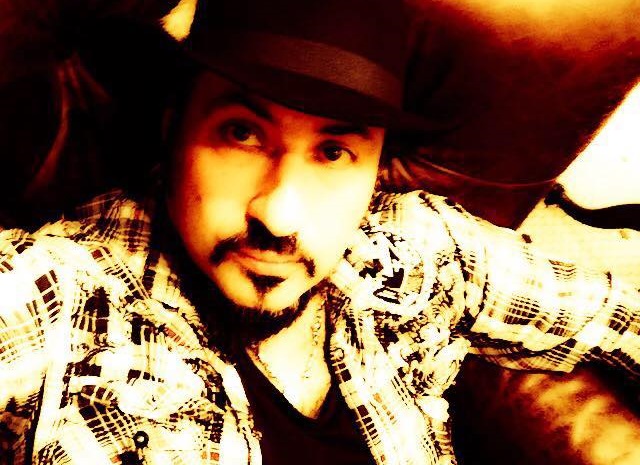 What do you learn about yourself from the Rock n’ Roll music and culture and what does the blues mean to you?

That more than a music genre, Rock n Roll is a lifestyle and it’s an approach to life and things, you don’t learn it, you either have it or you don’t, and fortunately (or unfortunately) it’s the only one that fits me.

Blues for me it’s like the indispensable base ingredient for any great dish, you start from there and then you add whatever you want, but that core, that bulk, needs to be there, otherwise it’s like a pizza without dough or a house without foundations. Blues, whereas in classic form or in any of its derivate it’s what makes me tic, it’s the emotional element of modern music, rock , pop or jazz  that is…without that soul, that passion, you’ll end up with Justin Bieber or Kanye West and, sorry, I am not interested in neither.

What were the reasons that you started the Blues/Rock researches? What characterize your music philosophy?                      Photo by Riccardo Arena 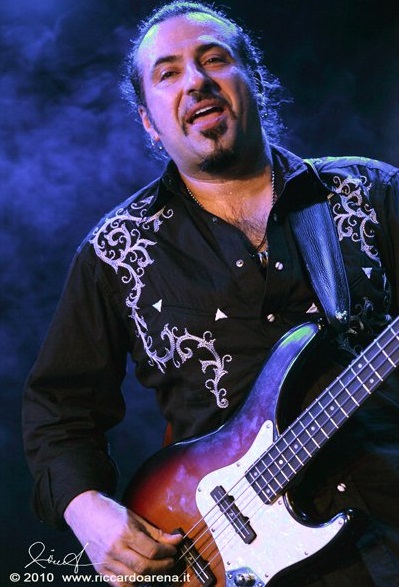 To be honest, I never really got into an anthropologic study of blues music or its derivates, that would be ground for my brother Lance Lopez, he could write books about it. What I study is the sound and its evolution, but always in relation with how it touches people. What I know about Blues is what I hear, the music I listen or record, the concerts I’ve seen, the life I lead, the songs I write, and no matter what, it always hits to a point where I can care less who plays or sings, it becomes almost a mantra that you don’t wanna stop just so you can read the booklet credits. Sure I know and have lots of records, written, produced and mixed even more, I know the names and “some” of the titles, but it’s that vibrations that only the Blues can give you, that lights up my interest, and that’s my music philosophy, if it grooves and it touches you, then it’s great music. That’s it.

Oh God, being a musician, every acquaintance is paramount, cuz there’s so much to learn from out there, from the top of the class to the last of the students. Everyone has a story to tell so; I cherish them all and try to understand the lesson that lies in every episode of our life. I would say that musically speaking the most important experience I’ve been thru is Supersonic Blues Machine, because after 20 and something years spent helping other phenomenal artists to find their voice and record it, I finally got to do just that for myself, and incredibly enough, with the help and the support of most of my dearest friends, colleagues and clients. It’s an expansion of love connections and vibes that became alive and it includes a lot of different particles that are my friendship and relationship with the music and its makers. Dearest friends like Steve Vai or Steve Lukather or Glenn Hughes, were not featured in this first SBM record, but they all know how much of them being around was necessary for me to even think about something like this to happen, so I guess, friendship is the other most and equally important experience!

Steve Vai told me that I have a great vision for things, but only when I make sure my heart is the driving engine of any endeavor of mine, those dreams will turn into reality….try to keep it that way no matter what!

Leslie West told me that the secret behind every legendary guitar solo is to play each note like it was the last note I could play in life….and if Leslie says so, you have to believe it.

Billy F. Gibbons , recognizing my capacity to mask my Italian accent and turn it into a perfect East Coast one, told me “Fab, why do you wanna blend in when you can stick out “? 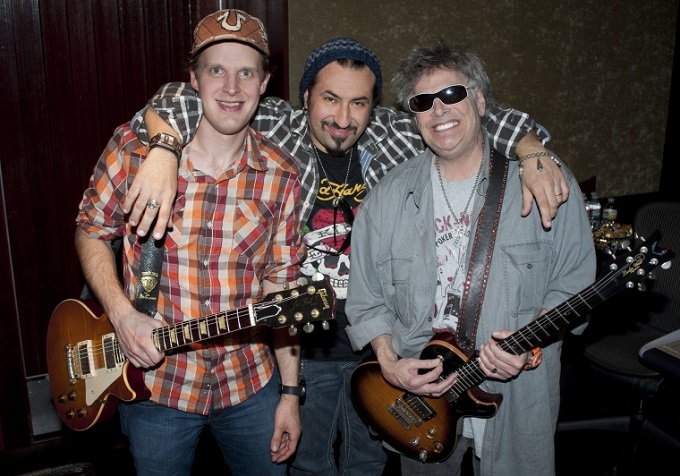 "Music like everything, runs in cycle, and it’s not surprising seeing Blues and blues inspired music, being so popular now, right when the world is once again living really hard times and everything seems to be going to the shitter." (Photo: Joe Bonamassa, Fabrizio, and Leslie West in studio)

Too many to be listed, I might have to write a book about it, but one thing that will always stay with me, was having Glenn Hughes, Chad Smith and Steve Vai working together on a track I was producing. Here I am, the Immigrant turned producer, which was giving instructions to these luminaries of their own instruments, on what to do during the recording…surreal and extremely rewarding at the same time.

Most and foremost: the songs!!!!

I am an optimist, so I’d like to see the world going to be a better place, in spite of all the bad shit that’s been going on, and music to go back to be a real art and craft again, and not background noise for Friday night’s club and decadent video games.

Spotify, Pandora, Apple Music and all of these fuckers forced to go out of business because FINALLY the already existing intellectual property laws are fully enforced, and the powers to be of the world will finally stop treating us like court minstrels, and recognize music to be a legit profession, that needs to be treated like all other professions …with all of the benefits and respects of the other professions.

What are the lines that connect the legacy of Blues with Rock n’ Roll and continue to Rap/Soul and Hard/Metal? I guess age and type of guitar distortion are the most visible lines, but while up to 10 years ago or so, any of the genre you listed above were handled by musicians with musicians for musicians and fans alike, now they are dealt with like different pre-fab patches of some wicked “music making” video game, where everything get snapped to grid and technology runs a mock, undisputed leader, and look up model for anyone with some sort of musical aspirations. I think that until we manage to bring it back to when technology was a meaning to achieve a goal, and not a talent substitute, we won’t be able to talk about legacy and connecting lines, other than for a few elected ones.

During the making of a great documentary I am proud of being part of “Sidemen-Long Road to Glory”, for which Supersonic Blues Machine did the soundtrack, we ended up in meeting lots of very young musicians that were getting into the blues…their pure soul and uncontaminated approach to music making, reminded me how it should be and why I got into this game to begin with. Extremely humbling and heart warming experience.

What is the impact of Blues and Rock n’ Roll music to the racial, political and socio-cultural implications?

The perennial generational gap and contrast among parents’ music and their kids’ is always the most obvious, if we extend that to language and race, it could open a wide variety of doors. While I am not really sure if anything maligns to could pinned to music per se, a lot of people see music as a deviation tool, other as a deceiving vehicle, and some other just like a relaxing therapeutic tool. Blues and subsequently RNR, hold a very important role, because were the sound track of the years of change, in good and in bad, anti war, anti racism, equality with a love message. Music like everything, runs in cycle, and it’s not surprising seeing Blues and blues inspired music, being so popular now, right when the world is once again living really hard times and everything seems to be going to the shitter. It’s like, Spiderman won’t show up until a villain is menacing the city…so the Blues will be the strongest when time for thinking, reflection and emotion will be coming around…we’re living them, and that’s maybe why the Blues was born in the first place.

1969, Woodstock New York, on stage with Carlos Santana first, and Jimi Hendrix later. That’s about it …where it all started and where it all ended! 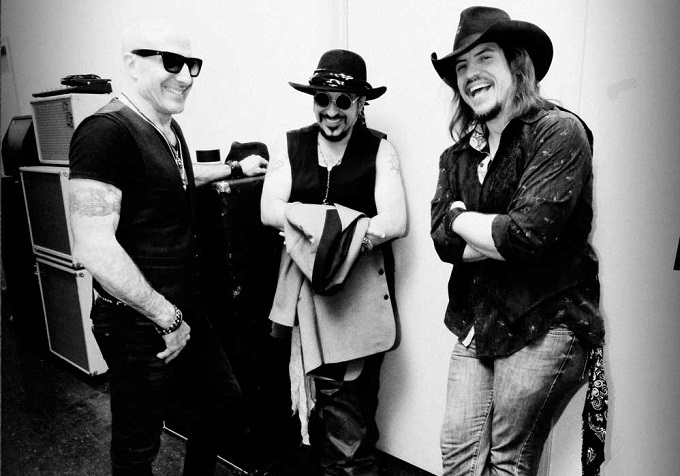