"Your word is your bond. If you promise to do a gig, either as a sideman or a leader or a full band, you NEVER cancel unless you're physically incapacitated."

New album “Not My Circus, Not My Monkey” (2021), by the New York based Hitman Blues Band (Russell Alexander), contains ten new original songs, and one cover (done in the Hitman Blues Band style). Featuring captivating vocals, blistering solos, and a rhythm section pushing a consistently intense groove, it also boasts captivating lyrics ranging from light hearted to tragic. The recording starts off with “Not My Circus, Not My Monkey”, a line you’ll probably be using regularly from now on. This is followed by the tongue in cheek “Buy That Man A Drink”, as it’s far from an act of charity. Then comes a complete re-working of Blind Willie Johnson’s “Nobody’s Fault But Mine”, including all new lyrics that stay true to the spirit of the original. Keeping with Mr. Johnson, there is “John The Revelator” performed in a unique Hitman Blues Band style – and imagining that other gods stop by and reveal their own end-of-times scenarios to John. The heart wrenching ballad “No Place Like Home” offers somber reflection, and then comes a version of Dylan’s “The Times They Are A-Changin’” like you’ve never heard it before. 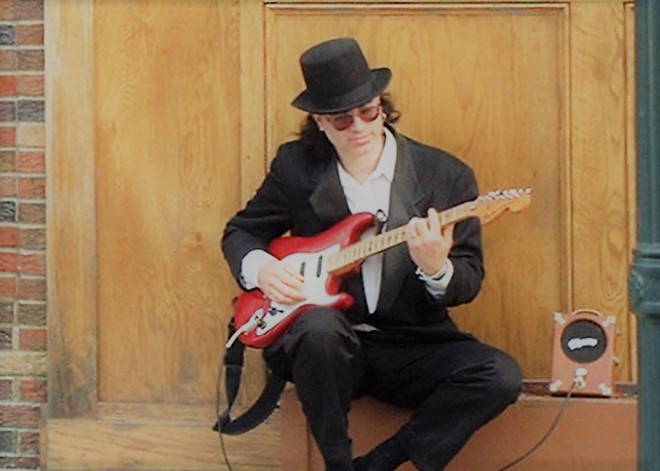 The groove infused “You Can’t Say No” is followed by the light hearted come-on of “Walk With You”, which sets up the attempt to explain overpowering love in “You Don’t Understand”. The album takes a turn back to the late 1950’s influenced “Everybody But Me”, a comic take on hipster loneliness. The closing tune is the anthem for every artist who pushes on no matter what, “Go Down Fighting”. The Hitman Blues Band plays modern blues, which can be high energy, slow and soulful, or happy boogie. It’s modern blues – blues of the 21st century.

It has caused me to question authority, to not take things at face value, and understand there are sometimes shades of gray in what seem to be black and white issues. This has influenced my writing, my politics, and affected decisions I've made (for better or worse) on how I've lived my life.

There is no question I've grown. I've learned from working with both good and bad musicians, band leaders, and songwriters. I've been forced to face my own short comings and to understand my strengths, as well as having to find ways to improve on both - a constant process that I work on daily.

Practice, although I'm not exactly disciplined, has remained a constant. So has learning new techniques and styles, which the internet has greatly assisted in. Also, the main goal of making music - communication - has remained the same.

How do you describe Not My Circus, Not My Monkey sound? Where does album's creative drive come from?

In broad terms, NMCNMM is Modern/Alt blues, which combines a lot of previous genres. More specifically, I wanted to continue to focus on the horn and backup vocal portion of the sound for the album. All of the songs can be played solo, or as a duo, but they were written with those features in mind. As with all my originals, the creative drive is from being based on my own life. Songs like "Not My Circus" are the result of being dragged into too many dramas - I've been told I have "white knight syndrome", which is probably true of a lot of people. At some point, you need to learn to say "Not my circus, not my monkey". "Buy That Man A Drink" is from a heckler retort my brother taught me, which I've used in live performance when a drunk patron got too obnoxious. "No Place Like Home" is an attempt to deal with my mother's impending demise, as she's in at-home hospice. It's hard to face, so I was better able to express it in a song. All of the songs come from things I'm going through or have been through, whether funny or sad or angry. Each one has a story behind it. 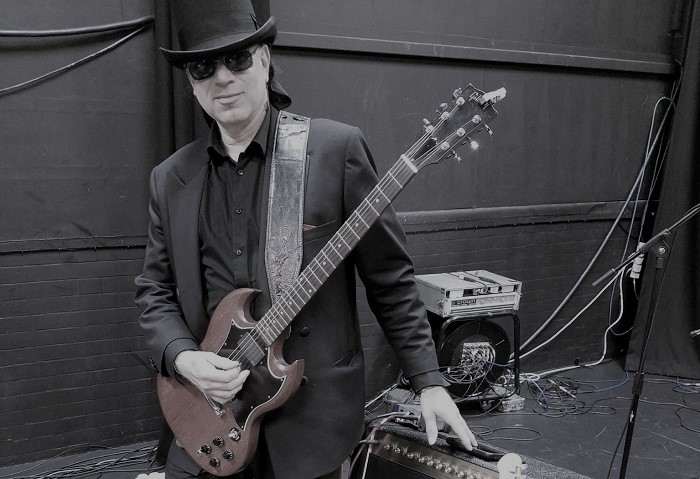 Why do you think that the Blind Willie Johnson music continues to generate such a devoted following?

He was an incredible, evocative writer. I first heard him on "When The War Was On", His voice absolutely stunned me. But his lyrics are a snapshot in time, as well as a portrait of thought. I rewrote the lyrics for "Nobody's Fault But Mine" to make it more personal to me, but of course I left the chorus - you can't improve on that. I also rewrote "John The Revelator" based on the idea of John of Patmos sitting in his cave, writing about the end of times. He was all alone, probably feeling the effects of isolation and zealotry. What if some of the other gods came by and gave their own version of the end of times? Maybe some of them did.

Are there any memories from The Coasters, Lavette Jackson, and Diana Ross which you’d like to share with us?

Not much I can share. LaVette Jackson was a wonderful, warm person who embraced everyone as if they were long lost family - even if she just met you. The Coasters I met were a spin off, but very nice guys and easy to work with. Diana Ross was unapproachable, but I can understand why.

What has made you laugh and what touched you from the Childhood’s End and CBGB’s era in New York?

Wow, that's a long time ago. Childhood's End was heavy duty progressive rock - the kind where you had to keep absolute focus because the time signatures changed constantly. If you got lost, there was no way to get back on track. It was challenging stuff, but also a lot of fun. Oddly enough, there was a lot of drinking and pot smoking involved at the same time. I guess when you're younger and have brain cells to spare, you can do that. We played a festival in the basement of a New York hotel (John Mayall was on before us, and I was so naive I didn't realize exactly who and what he was). In the closet that served as a dressing room, we found a chest full of leather stuff - apparently the place served as an S&M/B&D club during the week! I helped myself to a nice studded leather wristband, which was absolutely stealing but back then I had a looser sense of morals.

The CBGB era, in the 70's, was a mixup of everything. Progressive/hard rock was dying but still strong, disco came in and killed a lot of live music venues, and the reaction to that - punk and then new wave in the late 70s and early 80s, all combined to make a vibrant, if confused, scene. In New York there were a ton of clubs, most of which paid nothing or next to nothing, but the competition was still fierce. I remember one time we played at CBGBs and we couldn't get a beer - no breaks for the band, and they were ignoring us. Being cocky, I announced over the mike that I was thirsty and these bastards wouldn't serve us. Our fans went nuts, screaming "Give them beer!! Give them beer, you f***s!". A few seconds later a waiter came running over to the stage with a tray of beers. Considering we had a lot of bikers as fans, that was good thinking on their part. 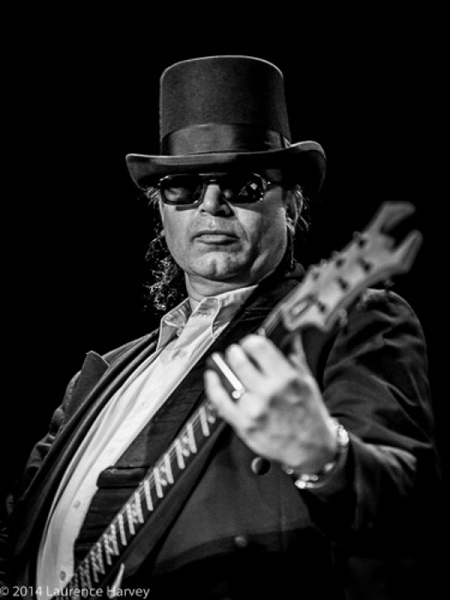 Your word is your bond. If you promise to do a gig, either as a sideman or a leader or a full band, you NEVER cancel unless you're physically incapacitated. There are plenty of incredible musicians and bands out there. If you can't be trusted, your ability isn't worth anything. Your job is to provide a cathartic experience for your audience. It's not to get applause, it's not about you. Many people live difficult lives. You are there to bring them to a different place, if only for a short time, and make them glad they went out (or logged on, whatever) for that performance, or to listen to that album. What you do can deeply affect people. Music reaches people in ways that are still not understood.

A very quick story, one of many: I used to play solo gigs at hospitals, nursing homes, and psychiatric centers - including locked wards, such as for criminally insane. One time, I was playing this place with two rows of tables in front of me, because apparently some of the patients were unstable and it was a makeshift barrier. I looked around, and didn't see any doctors or nurses, just me and the patients. At any rate, at one point I played "Mack The Knife", and this guy got up and started swaying and singing along. About halfway through the song I looked around again to my side (remember the patients were in front of me, with the tables between me and them) and saw all these doctors and nurses lined up, wide eyed. After I was done, I asked a nurse what that was all about. She said "that man who was singing - he hasn't spoken in ten years." I don't know why Mack The Knife reached him - maybe I don't even want to know - but like I said, music works in unusual ways.

What would you say characterizes NYC blues scene in comparison to other local US scene and circuits?

I'm sorry to say that there really isn't a NYC blues scene now. There isn't even a NYC blues society. There are still plenty of great players, but not many places to play. Because of the pandemic, even the dive bars closed down. But I'm very hopeful that it's cyclic. As rents went up, it was harder to justify having live music - every square foot of space was needed to generate income, so they killed live music and put in tiny stages and had live comedy instead. More room for tables, you see. On Long Island, there's still a blues scene of sorts. Some clubs will feature blues acts a couple of times a month, and there's an active blues organization (the Long Island Blues Society) that has been working towards more visibility for bands and clubs. Some other states, like Florida and Texas, still have flourishing blues scenes (or did until the pandemic), mainly because of blues organizations that actively promote it. And that's really the key - having groups of people that love the blues, in all of its forms, and are involved in putting on shows, promoting shows, getting asses in seats, promoting albums, etc. When you have that, you have a healthy scene. When you don't, there's nothing. But it can ALWAYS be done - the blues is a constant, even if it evolves in different directions. 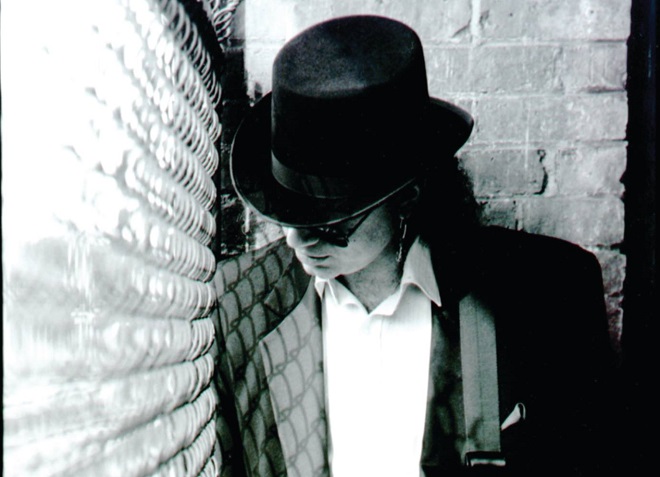