"A lot of the blues songs were written at a time when racial inequality was prevalent. There are many protest blues songs about hard times and injustice, Black, Brown and White by Big Bill Broonzy is a great example of it. Once I heard that the blues is the African/American revolution music, and I agree with that. Through the Blues and music in general you can touch people's heart and change or contribute to society."

Lone Bear (Brazil) plays Early Blues and Country Rag on resonator guitar, banjo, blues harp and kazoo, with classics ranging from the '20s to the '60s as well as his compositions. The multi-instrumentalist has toured in eighteen countries across five continents performing at countless venues and recorded internationally with five albums and a live DVD produced in Brazil. His latest album was recorded live in Clarksdale, Mississippi at the renowned Juke Joint Festival 2018, and across his discography more than 10,000 CDs have been sold worldwide. Performing live, the multi-instrumentalist is a captivating story-teller as he shares an authentic repertoire of spirited tunes and rogue tales from the Deep South. Lone Bear's first contact with music was through Capoeira (Afro-Brazilian-Martial-Art) at the age of 8. He then picked up the bass guitar when he was 13-years-old and started a rock band with his cousins which lasted through his teenage years. He later swapped the bass guitar for an acoustic when his band broke up, taught himself the harmonica and found himself in love with the early blues. 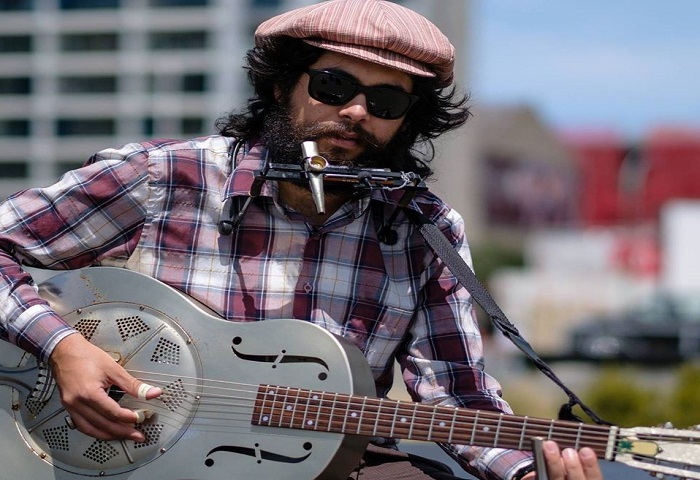 It didn't take long for Lone Bear to hit the road and start performing in bars, restaurants, private functions and on the street. Coming from a poor background, he didn't have many choices but to find a way to make money and face life on his own. Living in motels, a lot of times in the car or a van, on friends' couches and even on the street at times, his life over the next 10 years was spent hobo-in' throughout many different roads and cities around the globe. Lone Bear has recently enjoyed a European tour 2019-2020 and hopes to release a new album and start new projects wherever he finds himself over the next year. Faced with the challenges that the COVID pandemic has brought, he has taken to live streaming and virtual music platforms for now until live music venues reopen and his audiences are able to watch his performances face-to-face once again.

How has the Blues and Roots Counterculture influenced your views of the world and the journeys you’ve taken?

I've been playing the Blues for a living since 2012 and it has taken me all over the world across 4 continents and 20 countries... I can't imagine travelling anywhere without my guitar! Music is a universal language that brings different people together. The Blues, in part for being so old, true and "simple", allows everyone to feel it's nostalgic familiarity and "dig it". If I would use one word to describe the Blues, it would be "freedom".

How do you describe your sound, music philosophy and songbook? What touched you from the one-man band?

I like traditional music in general but what I like about the Blues is that it can be played solo (one-man-band) and it sounds full, different from other styles such as Latin or Irish music which often depend on a full band. I used to play more samba music as I'm from Brazil and once in a while some calypso but I definitely play mostly Blues and country rags among my own songs. Sometimes I like trying different styles and scales - last week I jammed with a guy on a sitar and last year with a guy on adungu (African instrument); it wasn't planned but it was awesome! Words can't describe it! And one thing's for sure, in the music world you can always learn from other musicians. 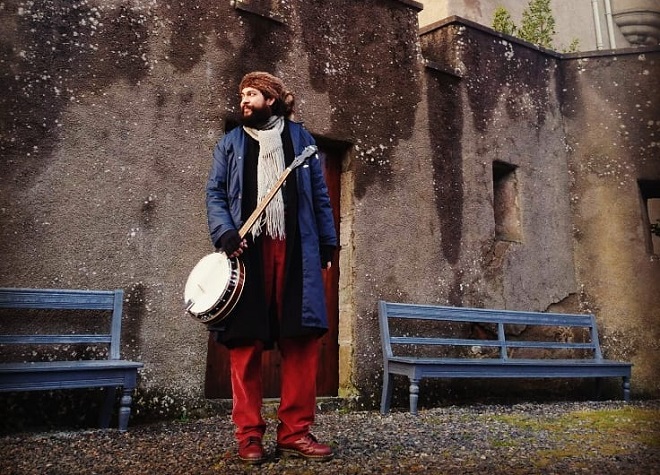 "The Early Blues was played by poor folks and most of them Black - it definitely had more feeling and the people of that time would really enjoy it! These days, especially outside of the U.S.A, most of the blues musicians and audiences I've come across are middle class, so I guess the Blues has become more elite." (Photo: Lone Bear)

What do you love most about the sound of acoustic instruments? What are the secrets of resonator and slide guitar?

Acoustic instruments have a real sound (no effects) and can be played anywhere, even unplugged! Resonator guitars were the modern technology before amplifiers and electric guitars came about. The resonator was created to be loud enough to be heard in a band whilst being played with loud instruments such as horns, banjo, mandolin, fiddle etc...This is what I like about it - natural amplification!

Slide guitar was developed in different ways and tunings in different regions across the U.S.A. Hawaiian music in my opinion has one of the most complex slide guitar techniques and is played on the lap. Mississippi bluesmen such as Charley Patton, Son House, Robert Johnson and Muddy Waters played a syncopated slide guitar in the Delta, while in the hill country Fred McDowell and RL Burnside would play one chord songs, almost hypnotizing with their strong African influence. Georgia slide guitarists had a lot of energy and played a fast and powerful slide - listen to what Kokomo Arnold did. Some of them played 12 string guitar, such as Blind Willie McTell and Barbecue Bob, whose sound reminds me of a clawhammer banjo technique. You see, I try to absorb and learn a little from each slide guitar style so I can understand them better, improvise and create my own music.

Are there any memories from gigs, jams, busking time, and studio sessions which you’d like to share with us?

In 2018, I was down in New Orleans, met some fellow musicians and we all jammed on the street! I was playing guitar, harmonica and singing, there was a washboard, a trumpet, a trombone and a saxophone. It was a real good time and we sure had a ball!

What are the most important lessons you have learned from your experience in the music paths around the world?

That there is always something to learn! 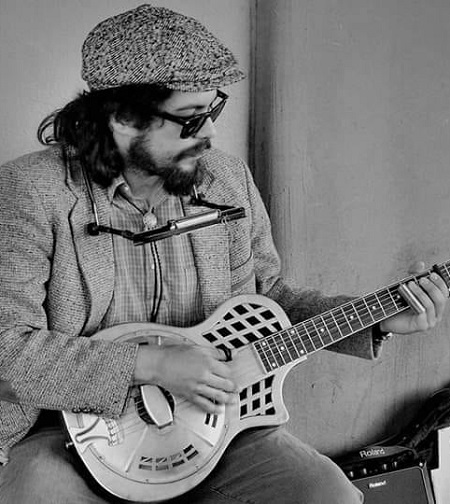 The Early Blues was played by poor folks and most of them Black - it definitely had more feeling and the people of that time would really enjoy it! These days, especially outside of the U.S.A, most of the blues musicians and audiences I've come across are middle class, so I guess the Blues has become more elite. I think this is one of the reasons why National resonators and other American guitars are a lot more expensive than back in the day - many collectors buy them to hang on the wall while struggling musicians have to play cheap guitars made on a large scale. Now with all the technology, musical instruments have been replaced by machines and the new generation is losing their interest in traditional music. You can tell that when you go to blues festivals, you see that most of the audience are older people. What will happen when they are all gone?! That's the biggest concern of all blues players I believe. But if we all together keep spreading how important the Blues and traditional music is and make it more accessible for all classes then we might keep it alive for longer.

What is the impact of Blues music on the socio-cultural implications? How do you want it to affect people?

A lot of the blues songs were written at a time when racial inequality was prevalent. There are many protest blues songs about hard times and injustice, Black, Brown and White by Big Bill Broonzy is a great example of it. Once I heard that the blues is the African/American revolution music, and I agree with that. Through the Blues and music in general you can touch people's heart and change or contribute to society.

Are there any similarities between the blues and the genres of local (Scotish/Celtic or Brazilian) folk music and traditional forms?

I think Scottish/Celtic is more close to the country music played in the Appalachian Mountain region as many Scottish and Irish immigrants went over to America to work a few centuries ago. Actually, my home country of Brazil has some interesting similarities with the U.S.A. Both countries were colonised by Europeans and transported slaves over from Africa. The African influence is very much evident in Brazilian music, as it is with the Blues. Some of the traditional Brazilian music is played using the same open tunings as are used in Blues music. The berimbau is a one string instrument that is used in capoeira (African/Brazilian martial art) and it reminds me a lot of the diddley bow which is played in the U.S.A. Many people ask me why and how I came to play the Blues when I am Brazilian, but I think the historic narrative of our societies are quite similar, and I found familiarity in the origins of Blues music.

New Orleans in the 1920's was what came to my mind right now! There are so many great musicians living or passing through and so many different styles of music such as Jazz, Blues, Ragtime, Country, Calypso, Choro, Salsa and so on. It's the most musical city I have ever been to, so many music clubs and bands playing on the street both night and day! I think back then it would be the real thing going on! 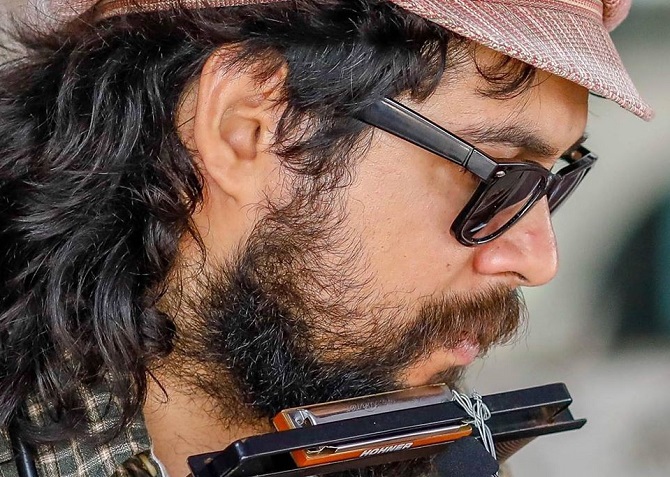