Q&A with radio hoster Cleve Baker (Confessing the Blues) - favorite blues tunes, past and present, around the world

"Blues Music has been an affirmation of racial indignities, political differences and social-cultural disparity since its inception. It's no different today. They exist and will continue unfortunately. Gratefully the craft is so much more than showing our disparity and deviance. The Blues is a happy and loving genre and I relish in the fact that the music will really set you free … Because the Blues Is the Truth."

Confessing the Blues is heard on fine radio stations around the world. Each week, Cleve ”The Bull” Baker serves as your host for this three hour Roadhouse party featuring your favorite blues tunes, past and present. Blues is the name given to both a musical form and a music genre that originated in communities of primarily the "Deep South" of the United States at the end of the 1800’s from spirituals, work songs, field hollers, shouts and narrative ballads. Blues Music is responsible for and ubiquitous in jazz, rhythm and blues, and rock and roll. Blues Music is truly the Backbone of American Music. Cleve says: My introduction to the Blues came at an early age in my Grandfather’s tobacco fields. Granddad’s help would sing work songs and field hollers as they primed tobacco walking bent over in the long, long rows of those tobacco fields. That’s where my fascination and my appreciation of Blues music began. Come Saturday night, the farm workers would meet with their guitars, harps, dobros and drum sticks at D.E. Baker’s Country Store. They’d buy some wine and gather round back to sit, drink and play the blues. Those drum sticks bouncing on a steel barrel and wooden Pepsi crate set the back beat to my introduction to renditions of my first Muddy Waters, Lightening Hopkins, Willie Dixon, Sonny Boy Williams andHowlin’ Wolf among others. I just couldn’t wait for Saturday night’s at Granddaddy’s store. I ease out the back door of the store with wine and an occasional jar of Granddad’s Moonshine so those men would continue to play. Those days and that music has never left me. 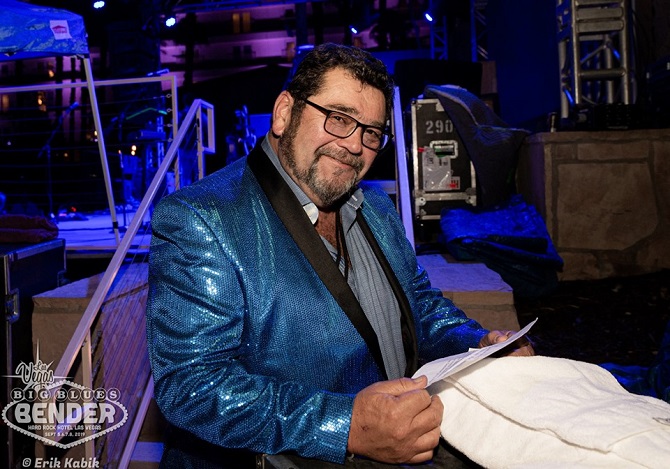 Sleepy Wilkins and Memphis Red Hicks, hard working men and great blues artist, told me tall tales about their travels on the Blues Highway out back of that country store. Tales of their migration from Mississippi up north to Chicago in their younger years just added to the lore of the music. The Blues Highway, Highway 61 that starts in New Orleans and parallels the Mississippi River north.  Highway 61, the route that crosses Highway 49 in Clarksdale, MS where legend has it Blues Great Robert Johnson sold his soul to the Devil. The Great River Road, Hwy 61, that was the conduit for spreading the Blues from down south to Baton Rouge, LA, West Memphis, AK, Memphis, TN, St. Louis, MO, to Dubuque, Iowa on to St. Paul, MN. Sleepy and Memphis Red spun tales of good times, rolling turmoil, and great blues music that was spawned in Juke Joints, Barrel Houses and Road Houses dotting the roadside along the way..."

What were the reasons that you started the "Confessing the Blues"? What is the hardest part of being a radio host?

That's a comical question with a real selfish answer. There is a local Friday night radio show here in Roanoke Rapids, NC that airs 5pm till 9pm. Johnny Draper's Friday Beach Blast. He plays Carolina Beach Music which is basically 60s & 70s R&B, Blue-Eyed Soul and Blues. I'd listen and have a few cocktails digging the vibe and then at 9 the programming would roll back to the 80's and 90's music the station normally plays. Well, Hell, My pump was primed by then and I wanted more of the Sweet Sound. I was cutting meat at a local grocery store then and I told my friends that I was going to start a Blues show on the station to follow Johnny. Folks told me I was nuts. They said the station would never hire me and give me 3 hours of air time. It took about a month and I was working at the station. 5 months later, “Confessing the Blues” aired its first edition on March 26th, 2010. Almost 500 shows later, we are still promoting today's Blues Artists and their Music. The hardest part is knowing that my Beautiful Bride has to look at the back of my office chair hour after hour as I produce the show, write & edit the interviews, answer the correspondence, update the website and the many other duties that have come along with hosting and producing an international syndicated Blues Show. She has been patient but surely neglected on a many of lonely night, right in the same space in our home. Selfish Indeed! 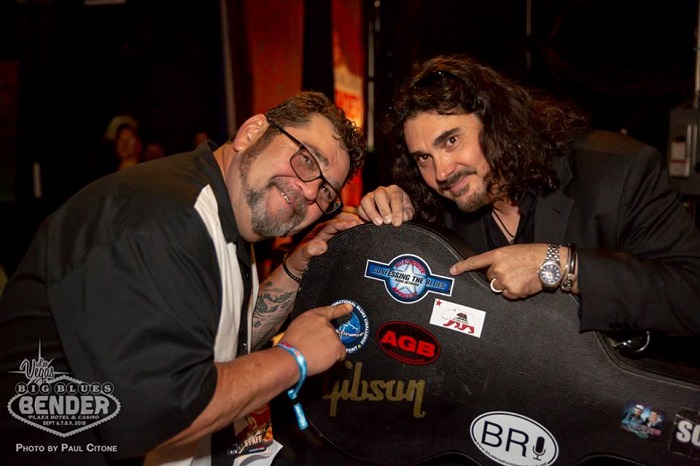 "I dream of a time when radio programmers wake up to the world class entertainment these Blues Artists from yesterday and today have offered the world and give them proper air time. My fear is that these and future radio programmers' slumber is indeed a coma." (Photo: Cleve Baker & Alastair Greene, 2018)

Are there any memories from interviews and "on air" in studio which you’d like to share with us?

I've been so privileged to interview so many great Blues artist. They are all so dear to me. The thought of these artist affording me their time is well beyond what I ever thought I would be able to do with Confessing the Blues. The list of artists is long but having the chance to interview Buddy Guy was really special. He did only 2 radio interviews after the release of “The Blues Is Alive & Well”. He spoke with National Public Radio for all of the United States and Confessing the Blues Radio. What an honor he bestowed upon me.  But to have the honor of speaking with, Jimmie Vaughan, Beth Hart, Curtis Salgado, Jimmy Hall, Walter Trout, Mike Zito, Shaun Murphy, John Primer, Tommy Castro, Anson Funderburg, Tom Hambridge, the list is so long and each and every opportunity has been a special gift for me … I'm humbled to have the opportunities and the platform to help promote the craft.

I miss the time I had years ago to listen to Muddy Waters. Willie Dixon, Slim Harpo, Magic Slim, John Lee Hooker and many other Blues All-Stars from back in the day. I'm fortunate enough to receive Blues Music from artists from around the world on a weekly basis. It takes up a good amount of time to give every release the same consideration. It leaves no time for the classic collection of music I've accrued. I dream of a time when radio programmers wake up to the world class entertainment these Blues Artists from yesterday and today have offered the world and give them proper air time. My fear is that these and future radio programmers' slumber is indeed a coma. 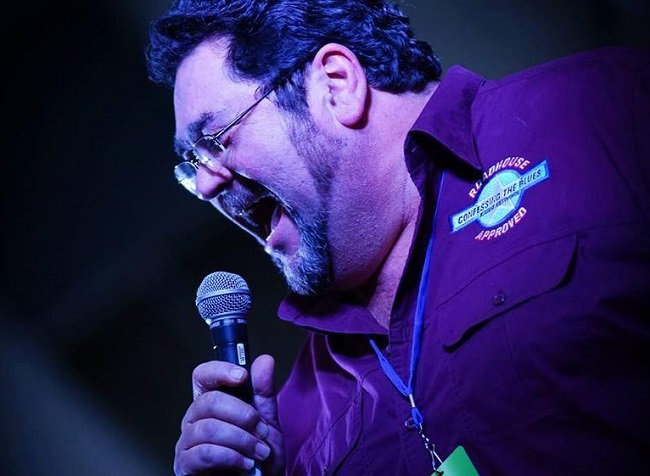 "No matter your background, situation or life's circumstances, if you are with Blues Lovers, you are loved.  It's a “If you dig the music, you have a friend in me” attitude. That theme echoes through the entire Blues Community. This pure music is infectious, is all inclusive and never discriminates. It's a Beautiful State of Mind." (Cleve Baker, Big Blues Bender - Las Vegas 2014 / Photo by Andy Cotton)

If you could change one thing in the radio stations/broadcasts and it would become a reality, what would that be?

I would rub a magic lantern and plead that every radio station on the planet would play at least one Blues song everyday. Now Keep in Mind, “EVERY” is an All Inclusive Word. It would make no difference, a Blues classic or breaking hit, just one opportunity to catch a listener during morning drive. No Matter What Their Format, hit them with a Blues tune to start their day. I work a Country Music Station from 6am till 9am weekdays on a Talk Show. My Country Music audience gets a healthy dose of Blues Music every morning Monday through Friday.

Truly, the Blues genre has afforded me a firsthand education about life from an early age. The Music brought full attention to the elation and sorrow that comes with growing relationships, dealing with the so called “establishment” in its many forms, about Trust. Love, Deceit and Faith in better days to come. The Blues has taught me that my journey on this planet will be far from what might be considered fair for any number of reasons but that I'm not alone in this journey. We all live the Blues. The craft has been a Bridge to Brighter Days because as long as you move forward there is hope and one day hopefully redemption when you do right by your fellow man.

"From that early introduction to the music and from the stories of adventure, the live music, the dancing, the beer and hard liquor, the gambling and the raw energy of it all has come “Confessing the Blues”, a new conduit for the spirit and passion of Blues Music and Blues Artist to reach the masses to relay their stories of Living and Loving, Fighting and Forgiving and the Ruin and Redemption of Life… Join the Roadhouse Party and let “Confessing the Blues” Radio spark the Blues fire in you …"

What are some of the most important lessons you have learned from your knowledge of the local blues worldwide?

No matter your background, situation or life's circumstances, if you are with Blues Lovers, you are loved. It's a “If you dig the music, you have a friend in me” attitude. That theme echoes through the entire Blues Community. This pure music is infectious, is all inclusive and never discriminates. It's a Beautiful State of Mind.

Yes, the Blues is a specific music genre. No Doubt. But the music is ever evolving, as it should be.  We are an evolving culture. As the different influences shape the music, understandably there are purist that struggle with the change. Change and Evolution are a living constant. Hard but True. But when all is said and done it is a state of mind for me. I often think when I a cue up a new Blues album, Where Is This One Going to Take Me. What a Great Ride to Be On.

To its fans, Blues Music has been an affirmation of racial indignities, political differences and social-cultural disparity since its inception. It's no different today. They exist and will continue unfortunately. Gratefully the craft is so much more than showing our disparity and deviance. The Blues is a happy and loving genre and I relish in the fact that the music will really set you free … Because the Blues Is the Truth. 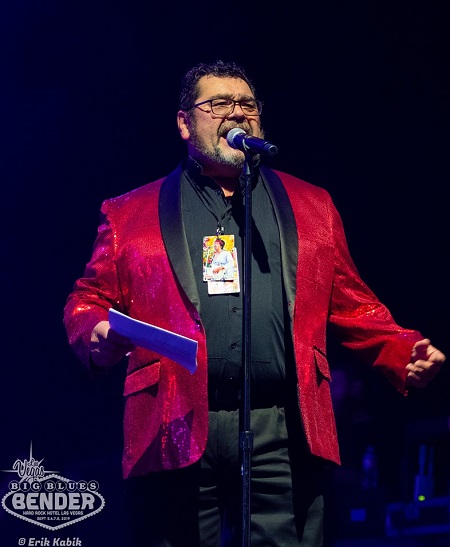 "Truly, the Blues genre has afforded me a firsthand education about life from an early age."

I'd roll in the Radio studio with DJ Robert Weston Smith in 1963 in Rosarito Beach, Mexico at XERF. I would marvel in his craft. He's a lifetime hero to me and lays to rest 65 miles from my home.

In that day, you could drive from New York City to San Diego and never lose that signal. From Selling Encyclopedias & Fuller Brushes Door – to – Door to the most recognizable Disc Jockey on the planet, Wolfman Jack was a deep and lasting inspiration.