"I’d like to see more music classes available in schools. I’ve learned so much, culturally, through music. It really can open a lot of eyes about what we all truly have in common."

Art may imitate life, but without a doubt, life has shaped the music of slide guitarist/multi-instrumentalist, Ned Bollé. He brings his varied life experience that are as diverse as his instrumental influences: Sonny Landreth, Joe Pass, Steve Morse, Danny Gatton…to his debut release, Box 1, by Mean Old Fireman & the Cruel Engineers. Slide guitar is Ned’s sonic paintbrush and Box 1 presents a variegated assortment of songs, unbound by conventional notions of genre. The American band Mean Old Fireman And The Cruel Engineers is a band from Boston, formed around frontman Ned Bollé. Ned studied at the Berklee College Of Music in Boston in the 1970s. At the same time, he was already active in the Boston music scene with his slide guitar. Dumpster Fire (2020), album from Mean Old Fireman & the Cruel Engineers, weaves ample doses of New Orleans grooves, southern rock and old school hard R&B into the band's blues roots. And after a year (or year and-a-half, really) that truly was a dumpster fire, few album titles are more appropriate for a blues record. Led by singer/slide player Ned Bollé, the album offers up a mix of four originals and six covers that, together, paint a picture that's haunting, inspiring and just plain fun. 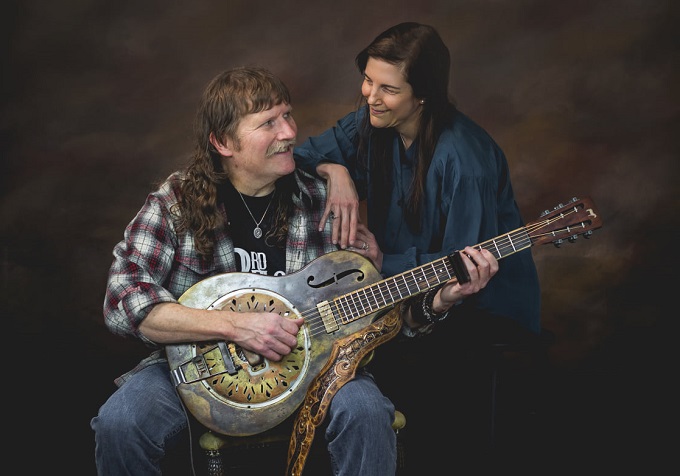 With a band name derived from a line in an old Charlie McCoy song ("Lonesome Train Took My Baby Away"), blues have always been at the core of his songwriting and playing. "Somewhere around age 11 I heard Derek and The Dominoes," he explains, "and those first few notes Duane Allman plays on "Key To The Highway" galvanized me; I wanted to sound like that. That whetted my appetite, and then, like so many people do, I found my way back to the roots of it all - Robert Johnson, Charley Patton, those guys. The same thing happened with my love for New Orleans music, Robert Palmer led me to Lowell George, and that led me to the Meters, the Nevilles, Dr. John, and so on." On the songwriting side, Bollé's experiences from 20 years as a firefighter and paramedic provide for some soul-searing subject matter with "Tour Three" and "Got No Spoons." But it's not all bleak, as the true-life story and sardonic wit of "McArthur’s Cunning Ruger" and the relentlessly upbeat "Outrun The Blues" offer plenty of balance. "I envisioned this to be a blues focused album, but I didn't want it to be just one style. Part of that was expanded a lot by the instrumentation, horns and strings and whatnot. There's some second generation funk, some R&B inspired things... the idea was to layer in a lot of influences on a blues framework."

How has the Blues, Jazz and Rock music influenced your views of the world and the journeys you’ve taken?

Although I was born in Chicago, I grew up in Rural New Hampshire. My parents were both classical musicians, so that was always in the house. They encouraged me to try different instruments and by age 8, I settled on guitar. The local music scene was a big mix of the folk revivalists (Bob Dylan; Joan Baez; Peter, Paul and Mary) and Folk Dance bands with a mix of English, Irish, Scottish and Acadian/French Canadian Music. Around age 10, I was tuning the radio in my bedroom and came across WBCN. They were this new free-form FM station that played anything and everything. I started hearing Robert Johnson, Dr. John, Miles Davis, Cream, The Grateful Dead, The Beatles, Elmore James, Jimi Hendrix. I was just taking it all in.

In school, I had no interest in history. It’s only much later in life that my interest in learning about the music I love pulled me into the history behind it. I had no clue about the Acadian history until I became curious about why the folk dance music shared so much with what I was hearing from New Orleans. Or just how deep the meaning of a word like “Freedom” has in the context of the blues. My musical interests have certainly opened my mind and world view.

In terms of sound and songbook, it’s pretty eclectic. I like to draw from all my influences and I look to push the limits of what can be done with slide guitar. It’s like a big old pot of stew. A lot of ingredients go in (not always the same ingredients, and rarely in the same proportions), but it’s generally a tasty result.

Lots of things inspire me, musically. Songs like “Got no Spoons”, “Outrun the Blues” and “Tour Three” came directly from personal experiences. “Gulf of Slides” (from our debut CD, “Box 1”) was a tribute to the folk music I grew up with and related sounds from Cajun country. “Bogged down” (also from “Box 1” is a musical journey of the blues moving from Louisiana and the Mississippi Delta up through Memphis and Chicago and out to L.A. and beyond. Lots of things inspire, but mostly its people and their stories. 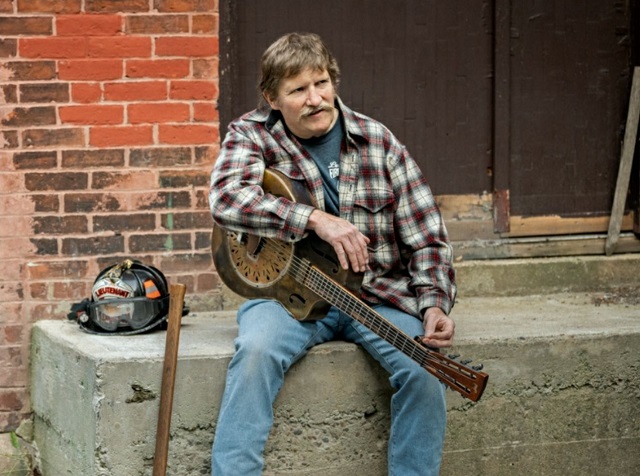 "I think there is a lot of great music being created today… across all genres.  Technology has made capturing and distributing music available in a way that was unimaginable 30 years ago. What I miss is the value that was placed on listening to music. You’d buy an album. Get it home. Cue it up. Listen to it start to finish. Both sides. Maybe even a few times." (Ned Bollé / Photo by Liz Linder)

What would you say characterizes Northeast area blues scene in comparison to other local US scenes and circuits?

When I first came to Boston, the scene was much more defined. There were some well-known players who lived here, like J.B. Hutton and Matt “Guitar” Murphy. There was The Speakeasy in Cambridge that featured nothing but blues acts.  There’s always been an audience for the blues here and once we get this Covid mess calmed down to where we can start to live in some sort of normality, the venues will feature blues artists because people will come see them. We got some great blues DJ’s that support blues from all over, Holly Harris at WUMB, Cap’n Barney up in Maine, Don Luisi in Pittsburg… they all do a great job of feeding listeners appetites for great blues music.

Why do you think that Slide Guitar continues to generate such a devoted following? What touched you from the sound of slide guitar?

I know for me, slide is about expression, expression that you can’t get with just your fingers. You can get a more vocal quality that really speaks to people. I used to be a bit of a purist snob: acoustic or just “Guitar, cord, amp” for electric. Having had the chance to listen, talk and play with Sonny Landreth, I realized “Why limit yourself?  If there are tools to help you express yourself, why not use them?” I don’t use effects or processing for the sake of using them. If it gives the sound I’m looking for, then I’ll put the technology to use. “Tour Three” is an excellent example. It has everything from acoustic resonator slide to some pretty funky effects on the electric parts.

What´s been the highlights in your career so far? Are there any memories from gigs, jams, and studio which you’d like to share?

For me, the highlights have always been about the energy and emotion.  Certainly, the chance to learn from Sonny was huge. He’s an incredible talent and the nicest guy you’ll ever meet. On stage? Quite a few years back, I was in a local blues rock band. We got on the bill to open for Matt “Guitar” Murphy for a show.  There was a good-sized crowd there and they were NOT there to hear us. The first few songs were not going over well. We slowed it down for T-Bone Walker’s “Stormy Monday”. By the second verse, the audience was all ears. You could feel it. Half way through my guitar solo, I look over to the right and there’s Matt, grinning his mile-wide smile. I was floored, inspired and humbled all at once. 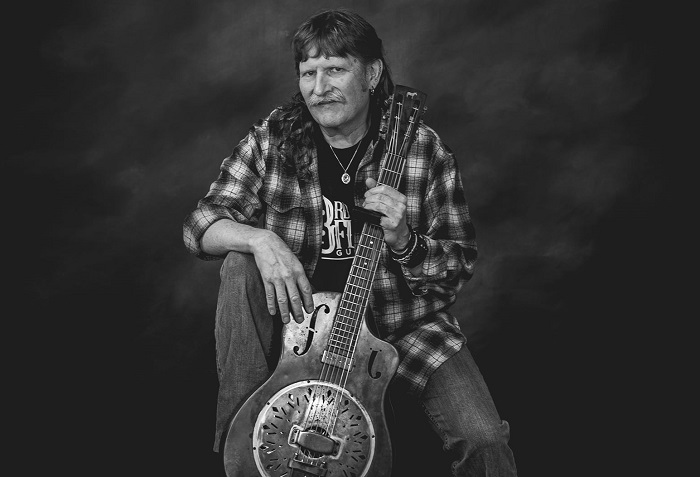 "While we all have our differences, we all bleed red and we all share the same emotions. We have far more in common than have differences." (Ned Bollé, 2021 / Photo by Catherine Elizabet Maranian)

I think there is a lot of great music being created today… across all genres.  Technology has made capturing and distributing music available in a way that was unimaginable 30 years ago. What I miss is the value that was placed on listening to music. You’d buy an album. Get it home. Cue it up. Listen to it start to finish. Both sides. Maybe even a few times. Now, listen habits are much less active.  People’s attention span can barely get through a Tik Tok video. Streaming is here to stay. It’s not Spotify’s fault or Apple Music’s fault. It’s a symptom of the shift in values. My fear is that even as the world emerges from the covid cocoon, we’ll just keep staring at our phones. My hope and belief is that we’ll want to get back to the experience of seeing and hearing live music and the feelings and emotions that are shared when the music is right and the audience and artists become one.

I’d like to see more music classes available in schools. I’ve learned so much, culturally, through music. It really can open a lot of eyes about what we all truly have in common.

I don’t consciously write songs to make political statements. Sometimes they do, secondarily, and that’s okay. “Got no Spoons” was written from the experience of seeing a parent’s grief of seeing their son’s opioid addiction. The fact that it expended into the greed of a family that made billions of dollars by pushing their poison at the expense of society in general was just a logical extension. I want my music to share emotions, happiness, grief, sorrow, joy, excitement, because that’s what we all share. That’s what makes us human.

While we all have our differences, we all bleed red and we all share the same emotions. We have far more in common than have differences. 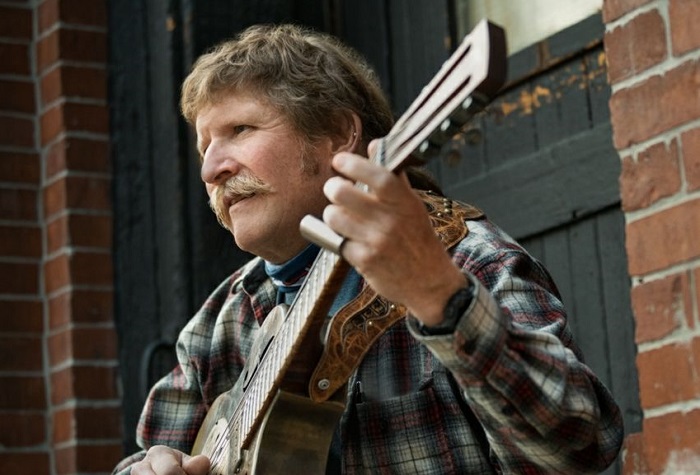