"Blues crosses ALL divides; racial, religious, cultural, and political. It should be taught in schools."

Graham Warwick brings a style of entertainment every bit as authentic as the blues music he plays to venues throughout the Texas Hill Country. Whether you’re looking for a rocking and rolling blues band or some laid back acoustic Americana, Graham can deliver the great tunes. While often Graham performs solo, many of his performances are in the company of some of the finest chops the Hill Country can deliver. His backing band, the “Sensational Bonafide Blues Band” takes on a couple of forms depending on the occasion, varying between a simple acoustic guitar/Upright Bass duo to a full on ten piece band complete with everything from harmonicas, to saxes, to alpenhorns (you really have to see it). Solo or in a band, Graham keeps the blues alive, focusing on authentic, time-tested standards from the first half of the 20th century, with some really moving renditions on favorites such as the “St. James Infirmary Blues” and “What a Wonderful World”. 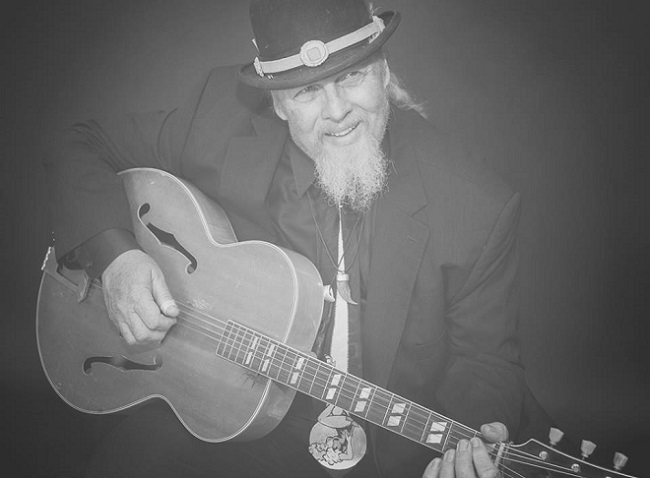 However, some of his most popular tunes are ones that he’s written himself. Based out of Fredericksburg, Graham can usually be seen playing in places like Barriba Cantina in San Antonio, Azul Lounge in Kerrville, and various wineries throughout the Hill Country. Graham’s album ‘After All These Years’ (2015) is a collection of tunes that Graham and the Band had been performing for years around the Texas hill country. Recorded with few overdubs, most of the polish on the album comes from years of playing the tunes at dive bars from San Antonio to San Angelo. The album features tunes written by Graham over the years.

Well, learning the blues is like learning a foreign language insomuch as learning the words - or notes - is the easy part. Learning the inflections, accents and emphasizes is hard. Learning how to express yourself, clearly in a “Blues” way. When I learned Spanish, I realized that to REALLY understand Spanish it helps if I understood people who spoke Spanish. Same thing with the Blues.  Getting in touch with my emotions; my likes and dislikes; my loves, my hates; what makes me comfortable or uncomfortable. It sounds simple… but it’s not!

The Blues is my happy place. It’s where I go to relax. The Blues is where I go and can tune everyone/thing out and meditate. It’s given me some of my most happy and sad times of my life. It led me to the woman of my dreams!!! (Those last two statements aren’t necessarily connected… then again…)

How do you describe Graham Warwick sound and songbook? What characterize your music philosophy?

I’ve always struggled with what to call my “sound”. My roots are in Country Blues, however, I’m most definitely not limited to that style. My songbook runs the gamut from Country Blues to Chicago Blues to New Orleans Blues/Jazz to Texas Blues and finally Folk Blues. I used to use a flat pick alternating with a thumb pick, but it got too hard to keep up with both. So I just settled on using a thumb pick. Now, I fingerpick EVERYTHING! Even when it’s not a finger picking style song! My goal is to become proficient enough at all styles of Blues to be able to represent them to my audiences in such a way that, while they are being thoroughly entertained, they are being educated - just a little bit - during every song!

How has the Blues & Rock n’ Roll counterculture influenced your views of the world and the journeys you’ve taken?               Photo by Hans Bauer‎ My interest in the Blues has broadened my horizons and travels. I believe that this is just the beginning! Its led me to several of the Blues “hot spots” in the world. I have been fortunate enough to perform in Dallas, Houston, San Antonio, Texas (Texas is IMHO the BIRTHPLACE of the Blues!). Also, I have performed in Chicago, Memphis, Grafton (Wisconsin - the early 20th century home of many of the blues recordings we now think of as formative and iconic!) and Detroit. I’m hoping to take my Blues to Europe one day! Like I said earlier, to learn the Blues, one must emerge themselves in the culture. The pain, the heartache, the joy, the drudgery of everyday life in the trenches, etc. I have seen, through experience, that Blues touches a wide range of people, from toddlers to eighties (and beyond!), rich to poor, across all races, religions and stations in life, and genders. This ability to communicate with the Blues is a stark difference to the state of communications of general politics and religions. If we could just get a Blues band to Congress…

Wow! That’s a hard one… There’s been so many!! There were many before, but, John Vandiver was the one who got me so insnared in the Blues. I’ve also had the opportunity to work with some Texas Blues greats such as W.C. Clark, Curley Mapes, and Spot Barnett. I’ve jammed with many others!!! One of the best times I had was when I had a duet for a couple of years with Spot Barnett (Spot is a tenor sax player that had his own band at the Ebony Lounge in San Antonio from the late sixties until he went on the road as Ike and Tina Turner’s band leader in the mid to late 70’s. He started his career as a teenager jamming with Bobby “Blue” Bland in Austin at the Victory Grill. He and/or his band performed with many of the greatest blues stars of the 60’s, 70’s, 80’s, 90’s…He discovered Doug Sahm. He was a member of the Texas Tornados, and the Grammy Award winning Westside Horns. His advice to me was to put on the same show with the same energy for EVERY crowd whether it was 5 people or 5000! It was good wisdom! I have tried to follow that advice every gig!

Wow! ANOTHER hard one!!! There has been a LOT of them!!!I ran a Blues Jam for 3 1/2 years in, of all places, downtown Fredericksburg, Texas! Almost every night there was a magic moment! The most magic moment was the night we had a benefit for Spot after his house burnt down. We raised $6000 for him and Spot and the jam band (The Bona Fide Blues Band) raised the ROOF!!! One more magic time… the lead player that was supposed to record on The Bona Fide Blues Band’s first album, After All These Years, flaked out at the 11th hour and 59th minute! John Sprott, my producer (and lead guitarist extraordinaire - named by Buddy Magazine as a Texas Tornado (no relation to the band) in 2004) was coming from Lubbock to the Hill Country to start recording the band at Loma Ranch Studio in Fredericksburg. As he was only planning to be the producer, he didn’t pack a guitar or amp. We tried to borrow a rig with the intentions that he would do the performance on the recording, but, as luck would have it, EVERYONE was out of pocket. He asked me what I had in the way of an electric guitar and amp. I told him that I had a cheap ($50) knock-off Telecaster and a vintage ’64 Fender Vibra-Champ. That was what he used! He worked on the Tele set up then said, “I hear a slide in that song!” Everyone started scrambling to find him a slide, while he searched around and found a straight mic-stand. He announced, ”This will do!” After some confusion, he just started playing some mic-stand slide and blew everyone away!!! It’s recorded now for posterity’s sake!!! And THAT is the rest of the story!!! "Well, learning the blues is like learning a foreign language insomuch as learning the words - or notes - is the easy part. Learning the inflections, accents and emphasizes is hard. Learning how to express yourself, clearly in a “Blues” way." (Photo: Graham Warwick & John Reeve)

I miss the dirtiness of the old Blues. The organic not-perfect, kind of sloppy, nearly out of tune Blues. Not that the past performers were bad or sloppy, but, less attention was paid to perfection & how many notes one could squeeze into a four beat measure. John Ike (the drummer for the BFBB) always tells me, ”I like it when it’s down and dirty!” Yeah, me too! I hope that the authenticity of blues will carry on! I fear sometimes that electronics will bury the organic nature of the Blues.

That being a musician would be a real financially rewarding career choice.

What are the lines that connect the legacy of Texas music with the Blues, Country, Folk and Southern Soul n’ Boogie?

Without exception, ALL of the old Bluesmen that were interviewed back in the early part of the 20th century named one Bluesman as their first inspiration… Blind Lemon Jefferson. He was from Texas. I can often be quoted as saying that virtually ALL of the popular music today has its roots in Blues. The “Father of Country Music” Jimmy Rodgers played his form of the Blues. Bob Wills LOVED playing the Blues! The cross-culture lines were numerous! The Blues literally found its way into every style of music! So, if you like any form of music nowadays, you are probably liking the Blues. 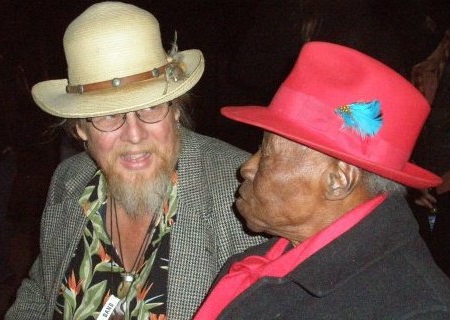 I remember seeing Pine Top several times. The most fun time was at a Blues Festival I played at Luckenback, Texas. He was dressed literally, from head to toe in RED! Red hat. Red shirt. Red tie. Red suit. Red socks. And red shoes! He was back stage and wanted to eat a BBQ sandwich, drink a beer, and smoke a cigarette - all at the same time! He said, ”They say this shit will kill me... but it ain’t happened yet!!!” He was 96 at that time!

One last word about Pine Top - Later that night, I was sitting in the audience marveling at a man 37 years older than me still doing what he loved… being on stage with a kick-ass band making GREAT music!!! I glanced down and saw his shoes… red… and about 2 sizes too big!!! I was wondering why he was shuffling so much!!!! Ha!!!!

What is the impact of Blues and Americana music to the racial, political and socio-cultural implications?

Well, like I said earlier, Blues crosses ALL divides; racial, religious, cultural, and political. It should be taught in schools.

I would like to sit in a Chitin Circuit juke joint and listen to all of those touring acts like T-Bone Walker, Bobby “Blue” Bland, Ike & Tina, Muddy Waters… I could go on forever…