Q&A with Deborah & Pat Mastelotto - A Romantic’s Guide to King Crimson, put listeners in a meditative and buoyant mood

"Music heals us. Music changes to spirit within us on a deep soul level. Nothing can take us back in time like hearing a special piece of music—it’s the ultimate time machine. Music connects us to moments, people, places, like nothing else on earth."

The Mastelottos: Heartbeat of Music 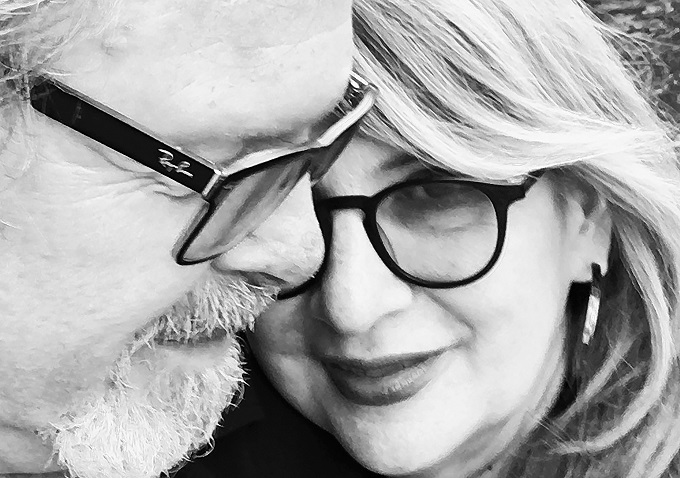 The recording features material they chose and arranged together with lead vocals by Deborah, a creative Tour de Force in her own right, and with Pat drumming and producing. The Mastelottos started the recordings in 2019 by inviting the Texas TOAPP alumni, including members of the Houston symphony, to record in Pat’s home studio in the Texas Hill Country. After a quick trip to Nagoya for his one and only live gig of 2020, which yielded the live Stick Men album “Owari,” Pat returned and spent months with Deborah during the 2020 COVID-19 lockdown finishing the project. The result is an album full of lush nuance and ornamentation designed to put listeners in a meditative and buoyant mood. Deborah Carter Mastelotto is a world-renowned astrologer and tarot expert. She is the author of The Tarot Primer book, a pathological entrepreneur, an obsessive remodeler, a minor student of quantum physics, an unapologetic observer of human nature and an indefatigable advice-giver.

Pat: That is my world, those are my people, what can I say? That's my tribe, that's who I run with since I was a teenager, I grew up in California and moved to Los Angeles when I was 17... so, I grew up around a counterculture, so it wasn’t really counter... it was my normal... actually about 15 years ago. I made an effort to meet and hang more with people that are NOT musicians, to try to hang with normal people.

Deborah: Jazz/rock/counterculture is my world and always has been. I grew up in Southern California during the best time for music, when rock was born. It is said that rock is just blues played very loud and very fast, experimental music has been fusing with jazz for years, and we hear world music rhythms and polyrhythms in pop music all the time. Influences from every world culture can be felt in the music we listen to now. Most of the important travel I’ve done in the world has been for music events. Music has defined my travel experience, as well as my life.

What characterizes A Romantic’s Guide to King Crimson songbook?

Deborah: We were all about the lyrics. Since the lyrics were going to be front and center, we wanted them to be important and true. When we shifted the first-person perspective of these songs from male to female, the words took on a completely different and personal meaning for me. The musicality of the songs built from there.

Do you have any stories about the making of A Romantic’s Guide to King Crimson?

Deborah: The most dramatic story about the making of our album was Covid and the lockdown! We began this record as a project in 2019. Pat had a 2020 tour scheduled for Asia, beginning with Japan in February and ending in Shanghai. In January I heard about a weird flu thing in Wuhan China, so I pulled up a map and saw it was only one high-speed train from there to Shanghai. I started to follow it’s crazy-fast trajectory. Pat came home from his cancelled tour March first, we put ourselves into quarantine and we went to work finishing our record.                               (Photo: Deborah & Pat Mastelotto) 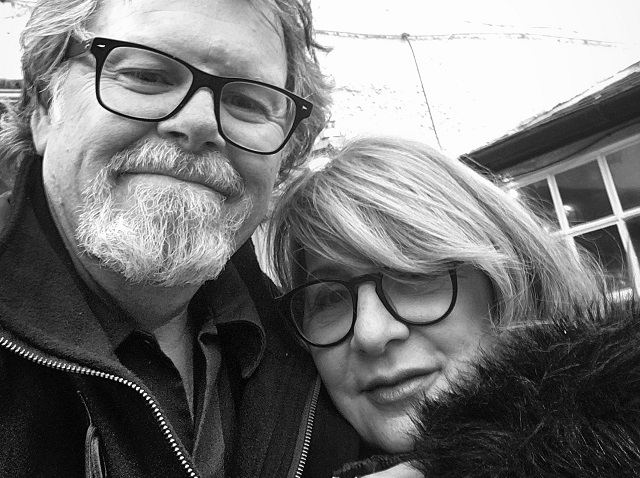 "That is my world, those are my people, what can I say? That's my tribe, that's who I run with since I was a teenager, I grew up in California and moved to Los Angeles when I was 17... so, I grew up around a counterculture, so it wasn’t really counter ... it was my normal... actually about 15 years ago. I made an effort to meet and hang more with people that are NOT musicians, to try to hang with normal people."

Why do you think that the King Crimson music continues to generate such a devoted following?

Pat: Because the music is real.

Deborah: King Crimson has always been an unusual combination of musical excellence, odd meters and time signatures, beautiful melodies, profound lyrics, and very loud instruments. The music attracts brilliant musicians and brainy people, fans who really appreciate complex musical theory. It has not, however, attracted much of a female following in the past. I’ve always wanted to help change that. Women tend to like music that appeals to them emotionally, not just cerebrally.

What do you love most and what was/is the hardest part about working and recording as a husband-and-wife duo?

Deborah: For me, the most difficult part about making this record was not that I was working with my husband—it was that I had never made a record before. Pat’s been in studios since he was sixteen. He’s such a pro, and he only works with pros. I felt like a fifth grader asked to write a college level master’s thesis. I love that Pat tells me I now have studio chops.

Pat: Lots and lots... Join Adrian Belew, Tony Levin and I for a week up close and we can answer all the questions in detail and you’ll meet some great people at Three Of A Perfect Pair Music Camp 2021 / Full Moon Resort.

Deborah: At a King Crimson show in Chicago I visited ‘the ladies room’ and found a woman clinging to one of the sinks, chanting “Make it stop, please make it stop!” She turned to me and asked, “Is it me, or is this music unlistenable?” I smiled and answered, “You’re asking the wrong person—I’m sleeping with the drummer.” She never asked me which drummer. 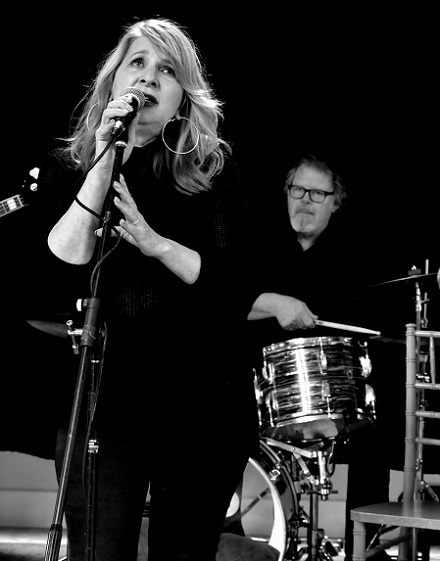 How does "Love & Romanticism" affect your inspiration?

Pat: It affects everything I do, All the time, mom, kids, lovers, pets... its life.

"Music has defined my travel experience, as well as my life." (Deborah & Pat Mastelotto / Photo by Rick Geater)

Deborah: There have always been female artists in the world, but females who choose to do it professionally? It’s a difficult path for anyone trying to make a life and a living as an artist. You have to give up so much. You are either on the road touring constantly, working nights, weekends, holidays, or you aren’t making a living—there seems to be no middle ground. You don’t have time for your loved ones, relationships, family. Married male musicians can sometimes keep personal relationships going if they are lucky enough to have someone at home who understands and is willing to pick up the slack, but who is there to do that for a female artist? So many of them have to make serious life-altering choices to continue this path. If you don’t throw your whole heart and soul into it you can’t expect to be great, but it’s hard to trust music to keep shoes on your kid’s feet.

Pat: All you need is love... And get Down Booogieooogie oogie oogie!

Pat: Too heavy a question ...I'm not superman.  Let's all just get along and take care of each other. Loosen the noose a little bit. I hope it can be enjoyed on many levels, I hope it brings good memories, I hope it helps inspire dreams.

Deborah: Music heals us. Music changes to spirit within us on a deep soul level. Nothing can take us back in time like hearing a special piece of music—it’s the ultimate time machine. Music connects us to moments, people, places, like nothing else on earth. To quote the great Tony Levin, “Musicians are the true ambassadors of the world. My wish for this record is for others, especially women, to feel the music of King Crimson on an emotional level the way I do. Fans constantly ask, “How can I get the women in my life to love King Crimson?” Pat and I see this record as a gift, like a mixtape, a possible ‘gateway’ to loving this music. 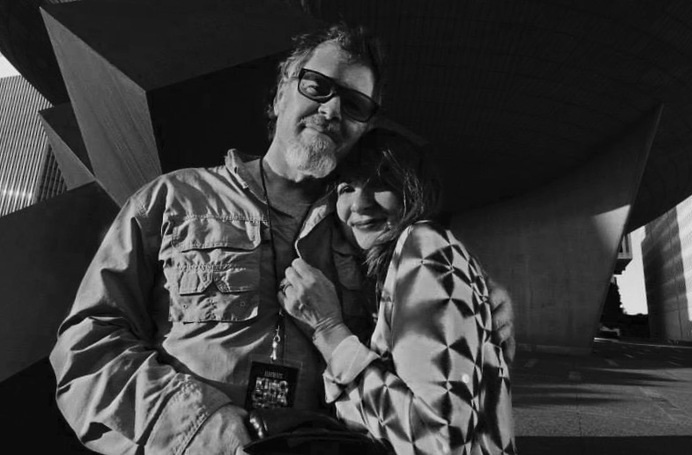