"The most important lessons I’ve learned from Piero are to live in each moment, and to be your most true, authentic self. People have described his playfulness, his laughter and his creativity to me and how unique he was. That love and affection still lives to this day despite his absence. In capturing all these memories of Piero, it has helped me create my own memory and connect with him through others. And, in the process I’m being my most authentic self."

Piero Heliczer’s second oldest daughter, Thérèse Casper, has nearly finished making a wonderful documentary film about her father "The Invisible Father". Piero Heliczer...Beat poet, experimental filmmaker, madman and... father? Tracing his underground life, his estranged daughter considers both the promise and pitfalls of authentic creativity. While he was a key influencer, she has to come to terms with the legacy of his mental illness and absence. The film: 1950s Paris at the Beat Hotel. 1960s New York at Andy Warhol's Factory. 56 Ludlow Street where the band the Velvet Underground was born. Piero Heliczer was at the center of it all--writing poems, making films and creating multimedia "happenings.” But what price did his 5 wives and 8 children pay for his authentic creativity and bohemian life? The film will show Heliczer through his films, poetry and art. In addition, the stories from his friends, collaborators and family will uncover the lost art of letterpress printing, beat poetry and cultural happenings. The experience of hearing a poet read in front of an audience with a multimedia presentation of music, film and movement was just beginning and Heliczer helped create that phenomenon with collaborators such as the Velvet Underground and Andy Warhol. The film will also touch about the family’s history and stories of Heliczer’s mental illness and artistic authenticity. How is living with a true artist and caring for someone with mental illness? How are brilliance and madness interwoven? While Heliczer’s daughters struggle with his absence in their lives, was his artistic authenticity worth the hole it left in their lives? Over 20 interviews have been conducted with Heliczer’s underground contemporaries, family and friends.

What were the reasons that you started the documentary film "The Invisible Father"? What characterize the film's mission and philosophy?

Growing up without a father, I always heard stories about my dad’s collaborations with Andy Warhol and Allen Ginsberg. His artistic work and close connections to those legendary figures felt important but there was a dark side.

When I became a parent and I saw the relationship my daughter had with her dad, I began to realize what I had missed. I began to crave a deeper understanding of my father, his work, and the circumstances that had robbed me of a normal relationship with him. I also began to wonder if he really was the creative genius everyone said.

I’ve been on a journey to not only know my father, but also to better know myself. My quest is to find myself, express myself, connect with others and be seen for my true, authentic self.

Over 20 interviews, which acquaintances have been the most important experiences? Are there any memories, which you’d like to share?

I’ve been following the trail of my father’s underground life for the past 5 years. In my journey to understand his poetry, film and influence, I’ve tracked down many of the famous people he knew and worked with. They are still making art today.

Among the most important people I’ve met are Gerard Malanga, Jonas Mekas & Jean-Claude van Itallie. All three knew Piero in his early years starting in the late 1950s and stayed in touch with him until close to his death. They saw his creative explosion and eventual downfall.  They have been very helpful in revealing Piero’s creative influence.

My film journey started with an exhibition of Piero’s work that Jonas Mekas organized in celebration of his 90th birthday. Over 20 years after Piero’s death, Jonas was still keeping Piero’s work alive and showed all the posters, poems and materials that Piero had sent him over the years. He even had my hand-printed birth announcement. Jonas also founded the Anthology Film Archives which has preserved some of Piero’s films. As a film critic for “The Village Voice,” Jonas wrote about Piero’s fims which are a wonderful record of how they fit into the experimental film canon of that time.

Jean-Claude van Itallie went to Harvard with Piero in the famous class of 1958.  Jean-Claude told me of their days at Harvard University and the infamous tale of when Piero stole the Julia Domna statue at the Fogg Museum. When I said “good-bye” to Jean-Claude he gave me a hug and said it was the hug my dad never gave me.

Gerard Malanga was able to tell me about Piero during the Andy Warhol Factory years, including how Gerard would act as a casting director to get Andy and others into Piero’s films. Piero & Gerard are featured together in Warhol’s “Couch.” He also explained Piero’s collaborations with the Velvet Underground and Jack Smith. Gerard has an extensive archive that houses many materials from Piero as well as critical photographs that document Piero’s life. Gerard also took several important pictures of my parents in Paris on Boulevard St. Germaine and met me very briefly when I was a baby. Gerard also published what my family calls, the Piero “Bible.” Little Caesar, Issue #9 was a 200 page festschrift that has letters, photographs and interviews about Piero’s life & work including an interview with my grandmother, Sabina Heliczer. 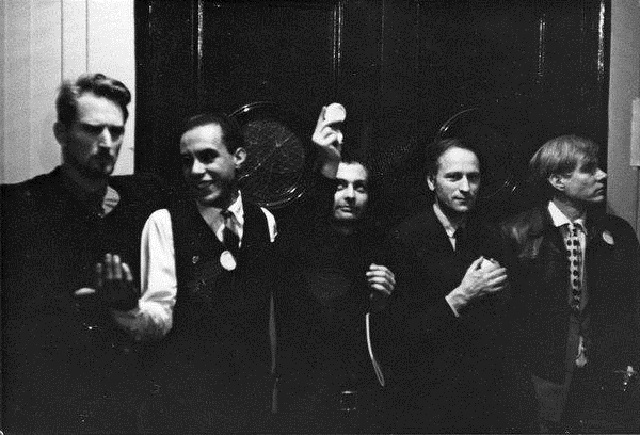 "Growing up without a father, I always heard stories about my dad’s collaborations with Andy Warhol and Allen Ginsberg. His artistic work and close connections to those legendary figures felt important but there was a dark side." (Photo by Matt Hoffman: Piero Heliczer, Jack Smith, Mario Montez, Jonas Mekas, Andy Warhol at Film-Makers’ Cinematheque in New York's Christmas party, 1966.

What has been the relationship: music and poetry in his life? Do you remember anything interesting from his records collection?

From my research, I know that Piero was very found of Purcell and even held a Purcell festival. He also bought his sister a Beatles record from the UK before it was available in the U.S. Some of his film titles could also hold some clues to music he enjoyed. “Venus in Furs” (1965) and “Satisfaction” (1964) are perhaps meant to be accompanied by the Velvet Underground or the Rolling Stones songs of the same name.

Regarding his relationship with poetry, I think this quote from Granary Books sums it up best:

“Heliczer's lyrical works incorporated classical notions of poetry combined with radical breaks in structure. The pieces explore the page itself, recreating spelling and placement of words to create "sheer visual clarity" in meaning and form. Heliczer blends abstract or "atmospheric" images to create an almost religious notion of poetry and life (Heliczer chose not to separate the two). The works move easily from throughout Europe and the United States, mirroring Heliczer's own roaming nature.”

If he was speaking seriously to us, what do you think he would tell us? What are some of the most important lessons you have learned from him?

As Piero’s work is starting to be exhibited and celebrated for the first time, I’ve asked some of those who knew him how he would react.  It seems that he was not interested in the normal trappings of success. He truly lived in each moment and thought about how that moment could help him live until the next. So, when honored with something like “Little Caesar #9,” Piero’s first response was to sell the copies on the street corner at his “bookshop.” Or when Jonas Mekas published a film review, Piero would put a quote on a poster to encourage people to come to the film screening. While he may have been happy with the accolades, he did not dwell on them and used them for the next event or opportunity.

The most important lessons I’ve learned from Piero are to live in each moment, and to be your most true, authentic self. People have described his playfulness, his laughter and his creativity to me and how unique he was. That love and affection still lives to this day despite his absence. In capturing all these memories of Piero, it has helped me create my own memory and connect with him through others. And, in the process I’m being my most authentic self. 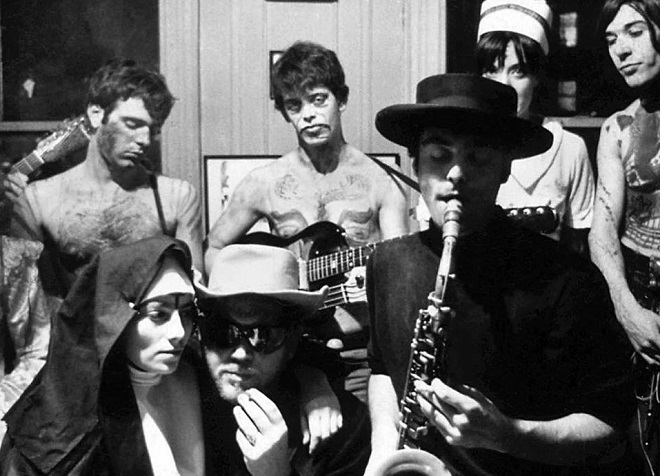 "As Piero’s work is starting to be exhibited and celebrated for the first time, I’ve asked some of those who knew him how he would react.  It seems that he was not interested in the normal trappings of success. He truly lived in each moment and thought about how that moment could help him live until the next." (Photo by Adam Ritchie, taken from the CBS story of "The Making of an Underground Movie" where Piero was filming The Velvet Underground in his film, "Dirt" 1965)

In my research on Piero, I’ve found that he was ahead of his time and was creating the counterculture. He was not reacting to it. As Sterling Morrison, guitarist of the Velvet Underground said, “For me the path suddenly became clear—I could work on music that was different from the ordinary rock & roll, since Piero had given me a context to perform it in.

Piero created multi-media film experiences with the Velvet Underground playing the sound track live, and Andy Warhol then monetized this idea when he added Nico and took the band on tour.

Traveling amongst his house in France, his wife in Amsterdam and the streets of New York, Piero was a true nomad & bohemian artist his whole life.  He lived day-to-day and somehow got by with very little. He was able to squat in New York’s lower eastside until redevelopment pushed out all the artists. Then, when visiting New York, he would sometimes be living on the streets. Many people supported him during this difficult time but he did not consider himself homeless. He could go back to his house in France or his family in Amsterdam. He didn’t change from being true to himself. The world changed and no longer supported true bohemians.

As his daughter, this is something I’ve been trying to tease out in making the documentary film. I’m still learning about Piero’s legacy and impact but this review from Edwing Pouncey, The Wire perhaps sums it up:

“Heliczer's poems are liberally sprinkled with dreamlike images that wantonly abandon all accepted poetical conventions (much to the annoyance of such old school writers as Robert Graves) to produce the literary equivalent of a primal blast of feedback from The Velvet Underground.” 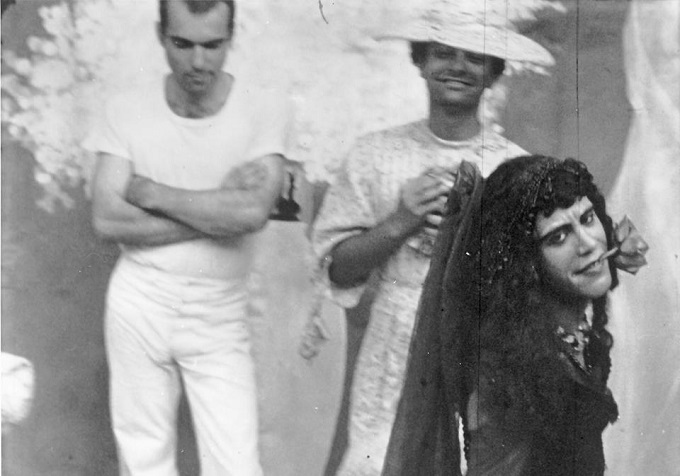