Q&A with West Coast harmonica player John Clifton, one of those rare musicians that has dedicated himself to the Blues

"It's interesting to see how the listener reacts to the music and how much they love the music in other parts of the world. It seems to be a universal music that moves people everywhere."

Rip Cat Records is proud to present In The Middle Of Nowhere (Release Date April 19th), the latest album from John Clifton. The California based singer/harmonica player, whose legend continues to grow with every release, seamlessly translates his onstage blend of West Coast and Chicago Blues, '50s style hard R&B and high-energy vintage Rock'n'Roll to the studio for 11 tracks that sizzle and shake to perfection. As a co-founder (w/ brother Bill Clifton) of Fresno's The MoFo Party Band, John Clifton has solidified himself as one of Central California's most in demand Blues front men since he started in the late '80's.  His from the gut vocal and harmonica presence and high energy performances have captivated audiences worldwide. In 2016, The John Clifton Blues Band performed on the Doheny Blues Festival, with Edgar Winter and Lynyrd Skynyrd headlining. With style and prowess on the level of Kim Wilson and Rod Piazza, John has always kept it real with his own voice and identity and never set out to be a copy of any of his musical heroes. As a showman he delivers straight from the heart, soul, and gut, staying clear of the typical clichés and novelties. He also keeps things fresh and exciting by effortlessly infusing styles from West Coast to Chicago Blues, classic R&B and Soul, to some hard driving vintage Rock'n'Roll. 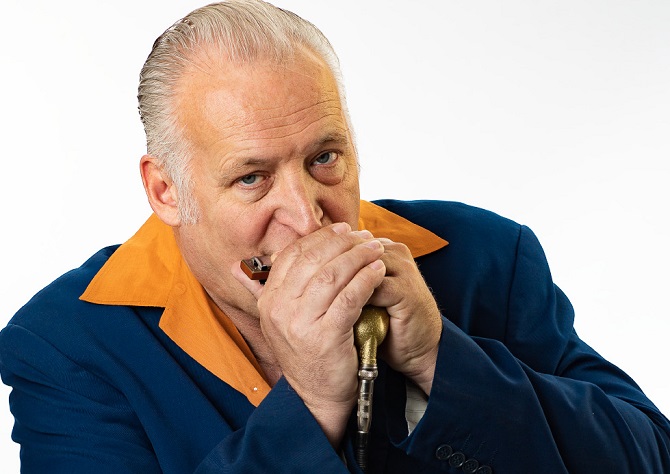 John's reputation and performances have earned him the respect of many of the greats as he has been invited on stage with the likes of James Cotton, Rod Piazza, Tommy Castro, John Mayall, Huey Lewis, Willie Big Eyes Smith, Luther Tucker, Kim Wilson, Billy Boy Arnold, James Harman, and Rusty Zinn. He was also given the honor of opening for BB King, winning and being a multiple nominee for the Modesto Area Music Awards, and receiving the "Declaration of Appreciation" from the State of California for his contribution to the arts. John has performed as a featured harmonica player 7 times and the prestigious Mark Hummel's Blues Harmonica Blow out show. In addition, John was asked to tour and record as the featured harmonica player with Big Bill Morganfield, on his 2016 release "Blood Stains On The Wall".  He has also brought his skills as a producer to the studio with a band from Poland called The Boogie Boys. Producer David Z best known for his work with Prince, Etta James, Billy Idol and many others, chose John's song "Anytime Is Cool" for the 2017 motion picture release "Shattered" John and Band were also asked to appear in the movie and were featured in the first scene. John captured the attention of Scott Abeyta, owner of Rip Cat Records in Southern California, and was added to a roster that included The Blasters, the 44's, and Kid Ramos among many other great names. He released his first solo album "Let Yourself Go" in 2015. In 2018 Brings a new CD on Rip Cat Records "Nightlife". John Clifton, one of those rare musicians that has dedicated himself to the Blues and has found continued success and relevance by remaining dedicated, excited, hardworking, and focused.

I think musically I've really learned to let out what is going on inside my head, and to have my own voice allow my influence to flow freely without being a carbon copy and still staying true to the form of the blues. I also believe its important to treat everyone with respect, especially fellow musicians no matter what level of expertise they are at. My stage is always open to friends and fellow musicians to come up and do their thing. To me that's what a musicians community is all about. Every show should be like a community event even if there's a beginning player than would like to try his or her hand at the stage I'm open to letting them try especially in a small club setting. I don't think there is enough of that kind of thing going on. Without this kind of thing cliques develop and that not good for anyone.

When I was 6, I saw an old film of Leadbelly from the 50's It stuck with me. I was never really into the same thing the other young people I knew were into. I always liked Oldies like Fats Domino and Elvis, Soul and R&B, and Country Western. I was an avid record cover reader that's how I would discover new artists. I read song writing credits to Juke on a Charlie Musselwhite record when I was 15 That lead me to discovering Little Walter then a whole bunch of things were exposed to me. My songbook is primarily Chicago Blues at the core, but I'm influenced by lots of stuff and I incorporate it all I'm also not afraid to let the influences of some of the later day blues artists come out in what I do as well. My sound is just "My sound" I can't really pin point what it is and I'm comfortable with that. 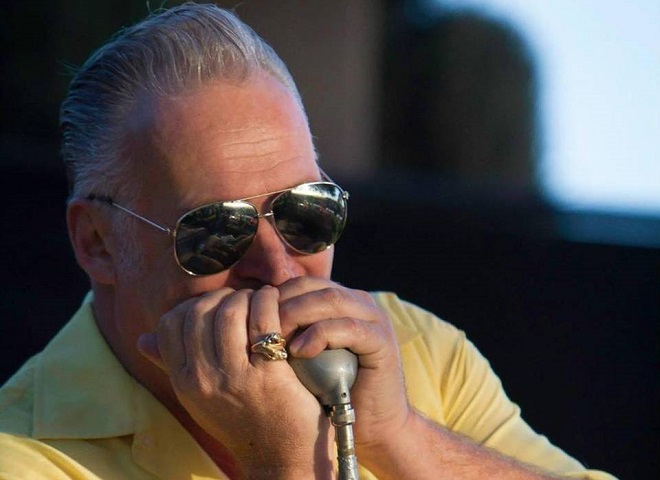 "I think just the sound got me turned on. The seamless moaning bending of notes and the rhythmic ability of the instrument. It really is a deep instrument. The secret is the harmonica is the instrument of life. Its the only instrument that you inhale and exhale to make sound just like breathing... It's living, so your true soul comes out of it when you play."

Playing Luther Tucker were probably the most profound musical experiences ever! He was the guitarist on all the records I loved. He was cool to me always and one of the greatest musicians I've ever known. Some guys Like Rod Piazza, Big Bill Morganfield, James Harman and Mark Hummel are guys who I am in contact regularly with and have done lots of projects together. They are real friends to me. the best advice I got was from Rod Piazza it was "Keep doing what you are doing" It took me awhile to figure out what he meant exactly, I wanted more quick fix technical answers, but once I figured out what he meant it was the greatest advice anyone has ever given me.

I used to sit in with a Piano Player named Dave Alexander AKA Omar "The Magnificent" Shariff. He held a Jam session at various clubs in Fresno CA where I'm from. He was the first real world class blues musician I played with. He was the best piano player I've ever seen. I knew everyone and introduced me to Albert King back stage at a show. he was the real deal... there were times he'd go off on a musical tangent it would be like he was in a trance and he's masterfully blend Chopin with Charles Brown, Ray Charles, Lloyd Glenn, Art Tatum and Albert Amonds all together it an amazing boogie woogie tinged jam... I've never seen anything like it to this day. He's a true nearly forgotten master of the blues. 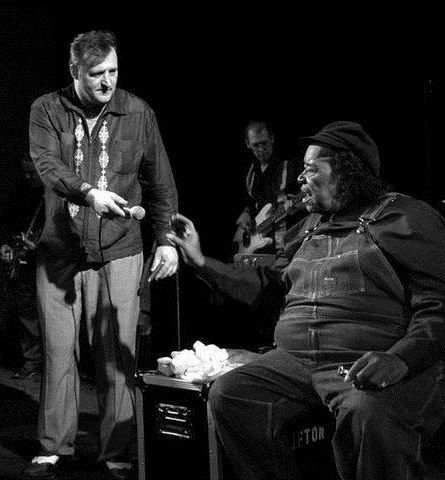 I miss going to Festivals and seeing acts like Little Milton, Ruth Brown, Clarence Garlow and James Cotton all on the same bill. I hope people continue to make good music and I hope listeners find value in it and continue to understand the history of all music.

"My songbook is primarily Chicago Blues at the core, but I'm influenced by lots of stuff and I incorporate it all I'm also not afraid to let the influences of some of the later day blues artists come out in what I do as well." (Photo: John Clifton & James Cotton)

Ownership, people are too quick to not want to own media... Streaming audio is really hard on the blue-collar musician. I hope people turn their thinking around and continue to buy CDs and records, and books too. When people own a record or CD, they tend to have a more endearing connection to the music, they put value on it... plus no one can take it away from you.

What touched (emotionally) you from the sound of harmonica? What are the secrets of?

I think just the sound got me turned on. The seamless moaning bending of notes and the rhythmic ability of the instrument. It really is a deep instrument. The secret is the harmonica is the instrument of life. Its the only instrument that you inhale and exhale to make sound just like breathing... It's living, so your true soul comes out of it when you play.

It's interesting to see how the listener reacts to the music and how much they love the music in other parts of the world. It seems to be a universal music that moves people everywhere. I'm not sure how to answer this. First and foremost, blues is music that requires a certain taste. Aside the scene and society aspect it is still just a music genre it’s Important for the art to remember this. Plus, that's a lot of pressure for a music genre. Music in general can-do great things... I will say I think as long as people just tolerate each other we will never take a step forward the word tolerance needs to be replaced with love and acceptance.

Most blues fans and very cool, and accepting and open people, unfortunately I still run into a few people who claim to be blues enthusiast that are still following racists beliefs, but with that being said perhaps blues music can educate people to embrace diversity. I think it does do that to a point and if it changes at least one person’s views then that's a beautiful thing.