"There are so many very talented young women artists these day. I didn’t think it was a big deal anymore. Huh. Well we though we were done with racism to. Look at these nuts! As women we know better. Men and women need each other. Get along. The best thing about these times is, we can in the words of the great Grace Slick “Fuck you we do what we want”."

Gail Muldrow is unquestionably “one of blues music’s most exciting talents”. She is one of the leading lights in the blues field. Her knockout live performances have made her one of the hottest artist on the contemporary scene. Gail has earned a well-deserved reputation for raw energy and crowd-pleasing shows. A highly charismatic stage performer, Gail Muldrow is able to stretch out in the live setting and demonstrate her considerable guitar skills. Very early in life Gail, who is a native San Franciscan, picked up the guitar and played on Sly Stone’s album “High On You” in 1975 – then known as Cousin Gale. Since that time Gail Muldrow (born November 23, 1955 San Francisco, CA), has been an important fixture in the S.F. music scene. For Gail there are no boundaries and she knows how to blend all musical genres into one original Gail Muldrow style. She belongs to those great Bay Area musicians who are difficult to place into one category. Gail “Mojo” Muldrow has been compared to guitarist such as Jimmy Hendrix, Jimmy Page, and Albert Collins. A multi-talented entertainer, she also plays Bass Guitar, Key’s and Drums. Her vocal versatility is amazing, reminding of the time when singers all had a distinct difference to one another. Gladys, Aretha, Etta are obvious influences in her vocal style. She has also become a member of the Family Stone – not in the sense that she played on any of the other Sly and the Family Stone albums during Sly’s time – but she is a driving force in bringing back together what remains of the Family Stone in various combinations. She has been a member of Family Without Stone around 1989 and in 2004 she join The Family Stone Experience aka Life: The First Family of Funk – featuring former Family Stone members Gregg Errico and Jerry Martini. With that connection it is pretty obvious that Gail’s guitar playing involves a lot funk. Although she has not been a member of Sly and the Family Stone in the 70s, she has been a member of Graham Central Station for two years and she is featuring on the 1977 album “Now Do U Wanta Dance”. In addition Gail played with famous funk musicians like Prince and Chaka Kahn. On the other hand Gail’s repertoire includes a lot of blues and she doesn’t only play the guitar – she is also a terrific singer. Since 1992 she has been a member of the Johnny Otis Show and can be heard singing and playing guitar on Johnny Otis’ album “R&B Dance Party” (1999). It was Johnny Otis who gave her nickname ‘Little Bit’ because of her height. Gail likes to use the nickname ‘Mojo’ instead. With this name and band – Gail ‘Mojo’ Muldrow – she backs up famous singers like Sugar Pie DeSanto. Gail has more blues and soul in her voice than the average blues singers. There is still more because Gail also knows how to rock the house, and with Quicksilver Gold – featuring yet another bunch of famous Bay Area musicians – she demonstrated that she can play psychedelic rock as well. Her experience in this field comes from her playing with the likes of Merl Saunders (with whom she co-wrote the song “Melons In Season” from Saunders’ 1979 album “Do I Move You”), Melvin Seals and The Jerry Garcia Band. Last but not least, Gail released several solo albums.

What do you learn about yourself from the Soul/Blues people and culture? What does the blues mean to you?

I think it brings a sort of inner spirit thru you. It helps you plug into to a universal nerve of human emotion, things that transcend conscious though. Blues give me the connection to that spirit. My Grandfathers music. My Grandfathers spirit.

Over the years my songs have always been inspired by what is going on around me and the people around me. The effect of current circumstances and the effect on music and the business of music. 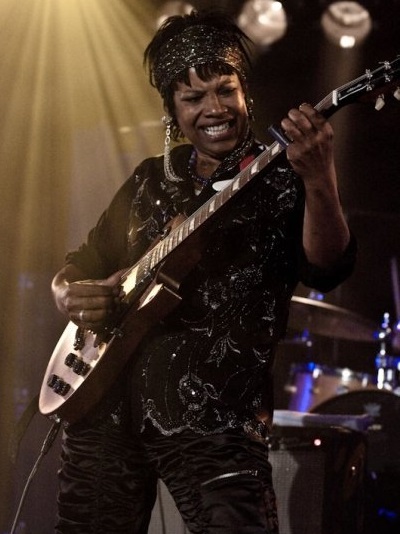 I have met so many great legends throughout my career and feel so blessed for that. Judy Davis, Sylvester Stewart and company, so many others … Geez. I mention these two teachers for showing me so much. Judy with voice and Syl with seeing the music apart from the business.

"I think it brings a sort of inner spirit thru you. It helps you plug into to a universal nerve of human emotion, things that transcend conscious though. Blues give me the connection to that spirit. My Grandfathers music. My Grandfathers spirit."

Are there any memories from Johnny Otis and Sly Stone which you’d like to share with us?

Both teachers were such an honor to be playing with. Johnny was such an icon and brilliant band leader and producer, politician, farmer, juice maker, bird breeder, artist, activist, DJ. Grandpa. Whew….what else? `

Sly was such a huge musical influence in my youth that I can’t even put it in words. My mom made some of there clothes back then and Sly would take time and listen to my band or watch me play the drums. Wow so cool. I got to sit in practice and go to the gigs in the bay area. He and teacher Freddy his brother would give me lessons on guitar and production. They recorded me at the Record Plant in Sausalito. A song called I get High on You. I got to sing and play guitar on that trac . I was a guitar player!

I hope real people keep playing real music. I hope the young musicians hold on to playing instruments and being the best, they can.

That playing music and all art continue to thrive unfettered by establishment guidelines. I hope we keep doing our own thing and play because you love music. Work hard, Play Hard. Don’t conform to producers forcing a “sound”. Make your own sound. Own you own music. Be happy about that.

What has made you laugh from Sugar Pie DeSanto?

She is the most awesome woman! We were being her back up band at San Francisco Blues festival and she did a cartwheel in a full-length evening gown and 6-inch heels. I am not kidding. Girl did not miss a beat!! My Hero!!!

What touched (emotionally) you from Jerry Garcia?

The first time I jammed with him I was in Merle Saunders band. At a place called the Shady Grove in the Haight SF. It was the first time I had ever seen him close up and personal. He just stared at me like “what?”. I was nine months pregnant and almost didn’t make the gig that night. The baby decided to turn earlier on the way to the gig. I felt better by the time we had to leave for the gig, So I was looking at him like “who’s that guy” and him looking at me like “who’s this pregnant lady?” Great right! So funny...

How has the Rock and Psychedelic culture influenced your views of the world and the journeys you’ve taken? 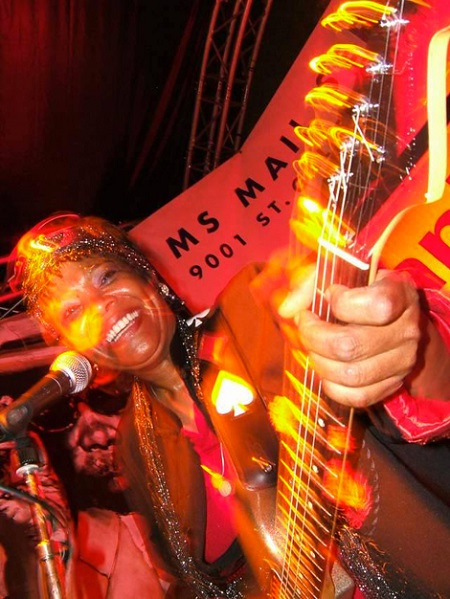 My oldest Brother John Wiseman exposed me to all the music that I play. He was a record fanatic and had the top 10 records every week. As a little girl my parents and family exposed me to all the classic Black music from Jazz, Gospel, Blues, RnB, Soul. Dad has a Purple Heart from ww2, The civil rights movement, Brother Johnny goes to Vietnam and comes home shell shocked and playing all this rock and roll. Crosby Stills and Nash, Jimi Hendrix, Grateful Dead, Bob Dylan, Janis Joplin, Cold Blood, Tower of Power, Curtis Mayfield, Stevie Wonder, Gill Scott Heron, Last Poets, Olatunji, All this and more. Martin killed, John K killed, Bobby Killed. Nixon, Watergate, CIA cocaine, angel dust, acid, heroin, cousins shot by police, Dad murdered, all these things come to my music. Now with things being even more crazy than we could imagine, I’m a music teacher, I play gig’s when it’s good. Nothing to do with money. Don’t think I don’t like getting paid now! But it is not my main motivation. Fame is way overrated.

What is the Impact of Blues/Soul/Rock music and culture to the racial, political and socio-cultural implications?

I’m not really sure if there is. I hope writers will stay relevant in their words. Keep forcing the truth to be heard. I feel the impact is enormous, and spiritually healing to the masses. Mock the stupidity of the absurd. Air the shame of the heartless. Tell the truth of the ages. Create awareness of the low intent of the vile. Don’t go quietly. Make some noise.

There are so many very talented young women artists these day. I didn’t think it was a big deal anymore. Huh. Well we though we were done with racism to. Look at these nuts! As women we know better. Men and women need each other. Get along. The best thing about these times is, we can in the words of the great Grace Slick “Fuck you we do what we want.”

I would like to hang out with Prince Jamming the whole day. I will always miss him. Thank you!