"I love the evolution of the blues. I love the old slow blues and I love the newer blues rock music and artists. I think this demonstrates its ability to evolve while still respecting the past roots of the music. I hope this evolution continues for hundreds of years."

Heeding the call from a higher power, Tulsa vocalist and harmonica player Steve Antry (pronounced “Ant-tree”) poured his heart and soul into his debut album “Devil Don’t Care” (2017). After spending most of his life building a business and raising a family, Antry is now following the dream of creating his own music and sharing his faith, vision and inspiration with the world. One of Steve Antry’s earliest jobs was working as a track laborer for the Frisco railroad in Tulsa. He was underage, but claimed to be 18 to get the job. This turned out to be his defining “Woody Guthrie moment”, as he describes it.  While driving steel with much older gentlemen with nicknames like ‘“Stokes” and “Bones” (who actually played the spoons), Antry became entranced by the music that was sung out in the country while repairing old railroad track. Everyone would sing along to the rhythm of the maul hitting a spike. That was Antry’s first unwitting exposure to the Blues, in its purest form. Now a singer songwriter, he remembers the circuitous path that got him to this moment. He grew up accomplished in sports, from wrestling and mixed martial arts to ice hockey, while getting his hands dirty doing just about anything manual. Then, as fate would have it, an unlikely mentor crossed his path. In high school, when work, wrestling and the outdoors were occupying most of his free time, a buddy said to him “the girls in the church choir are pretty cute, we should go.” While attending his first rehearsal his voice caught the attention of the church Music Director, who happened to also be the Dean of Music at the University of Tulsa and Director of the Tulsa Opera. The director took him under his wing and became his music mentor, giving Antry free vocal training every Saturday for years. “I received more inspiration and life lessons from him than any sports coach I ever had,” says Antry of his inspirational classical voice teacher from whom he learned music theory and correct projection and breath control, while developing his three-octave range. Antry was offered a music scholarship from Dr. Sowell, but fate led him to a degree in finance and a career building businesses and supporting a family. But he always sang, purely for the love of it, at weddings, memorial services and in Gospel choirs, which always brought back those railroad track gang memories of Stokes and Bones and the crazy rhythm of the spoons. “The Southern Gospel choirs are where I learned that presentation is as important as content. There was a lot of movement while singing, which was half the fun,” says Antry of those years. He discovered the harmonica (and guitar) as an adult, but found he had a natural aptitude for the Blues Harp. He advanced his skills in short order by applying his vocal training to his new obsession; and now travels with a Seydel pouch of Hohner Special 20s everywhere he goes. He regrets never attempting to master the spoons like old Bones. Antry had the opportunity to fulfill his musical dreams and begin a second life with fire and gusto, when he partnered with Peter Carson in 2015 to produce his debut solo album, “Devil Don’t Care,” in Nashville, diving head long into the process of recording and writing his own music for the first time. In 2016 Antry formed Joyride Blues Band with local seasoned players, quickly winning over Tulsa Blues fans and scoring headliner spots at the famous Cain’s Ballroom and Mayfest, one of Tulsa’s biggest music events of the year. His love for performing shines through every time Antry hits the stage.

To me, the blues is just about life. The good, the bad, the pretty, and the ugly. It’s not always sad, it’s not always happy. Kind of like life. But to hear those struggles and journeys and joys put to music in such a viscerally appealing format is unmatched in any other form. The music is relaxing and stimulating at the same time.

How do you describe Antry sound and songbook? What characterize your music philosophy?

I would characterize it as Gospel Blues, in that there is a spiritual component to every song. I like the topics of temptation, redemption, love and salvation. Each song on the album has a special meaning to me and charts my life’s journey, which is still a work in progress. 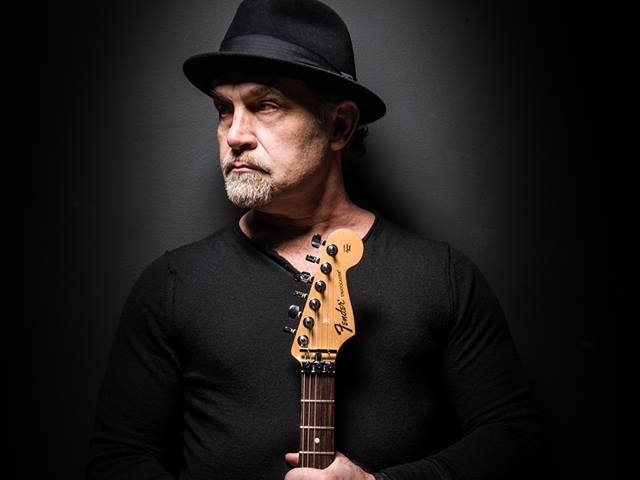 "To me, the blues is just about life. The good, the bad, the pretty, and the ugly. It’s not always sad, it’s not always happy. Kind of like life. But to hear those struggles and journeys and joys put to music in such a viscerally appealing format is unmatched in any other form."

How has the “Woody Guthrie moment” influenced your views of the world and the journeys you’ve taken?

I remember lying about my age at 17 to get a job as a track laborer for the Frisco Railroad in Tulsa. Best paying manual labor job around. They handed me a spike maul and told me to jump up on a flatcar with the other men. I’m meeting “old timers” with names like Stokes and Bones and Big Mike. At the time, I couldn’t help thinking of the line from Arlo Guthrie’s “City of New Orleans” referencing “freight trains full of old black men”, and thinking this was going to be an interesting time for me. It was. Bones played the spoons, Stokes sang songs with absolutely no ability to enunciate. You, literally, had no idea what he was singing. But it was still so musical. Big Mike made weird rhythmic sounds with his mouth. I still use some of his “sound effects” to imitate the sound of a distant train or a howling wolf. It was glorious. But what I really learned was a stronger sense of inclusion in my life. And there is no better bonding vehicle than music. It’s how we got to know each other. It’s how we passed the time. I still drop in on Big Mike to this day. He runs a retail shop here in town.  And there is still no one on the planet that can imitate a trumpeting elephant better than Big Mike.

Musically, I was noticed by a rather renowned classical vocal figure in the Tulsa area when I was 16. Head of the Tulsa Opera and Dean of Music at the local University. He overheard me singing the first night I attended my church’s choir. He recruited me for private vocal training every Saturday morning at his home for years. No charge. He taught me how to breath and project and shape tones.  He called it teaching how to “sing like a man”. He had a very powerful voice.

Best advice was “fortune favors the bold.” I have always approached life with a certain fearlessness. I don’t care if everyone doesn’t like what I’m doing. If I’m prepared, and feel like I am giving it my all, then “haters gonna hate”, as they say.  You can’t concern yourself with that. 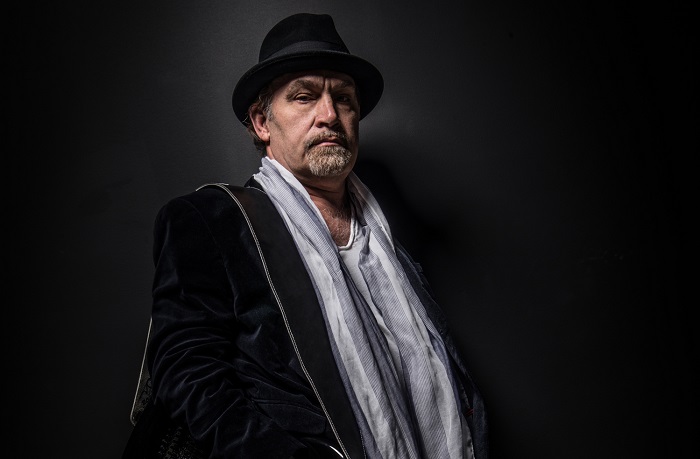 "I would characterize it as Gospel Blues, in that there is a spiritual component to every song. I like the topics of temptation, redemption, love and salvation. Each song on the album has a special meaning to me and charts my life’s journey, which is still a work in progress."

Entering a recording studio probably later than anyone on the planet, I got a kick out of learning and observing the little things that these amazingly talented, and seasoned, studio musicians did. One that sticks in my head was when any song had a key change, all the musicians in the control room would all clap like they were at high tea. I really enjoyed observing, and then knowing, that little private joke.

I love the evolution of the blues. I love the old slow blues and I love the newer blues rock music and artists. I think this demonstrates its ability to evolve while still respecting the past roots of the music. I hope this evolution continues for hundreds of years.

I do wish old school would accept new school a little more open mindedly.  I have picked up on some animosity at times from the two factions. I love them both, personally.

What has made you laugh and what touched (emotionally) you working as a track laborer for the Frisco railroad?

So, there I was, 17 years old around a bunch of soulful old timers who were singing the blues while laying track out in the middle of Nowhere, Oklahoma. I could sing (had some decent classical chops by then), but was terrified to do so in front of these guys. Well, months into it, I finally picked my spot and jumped in. To date, the highest praise I have ever received was when one of them said “damn, college boy can sing”. That was a great day.

What is the impact of Blues and Roots music on the racial, political and socio-cultural implications? 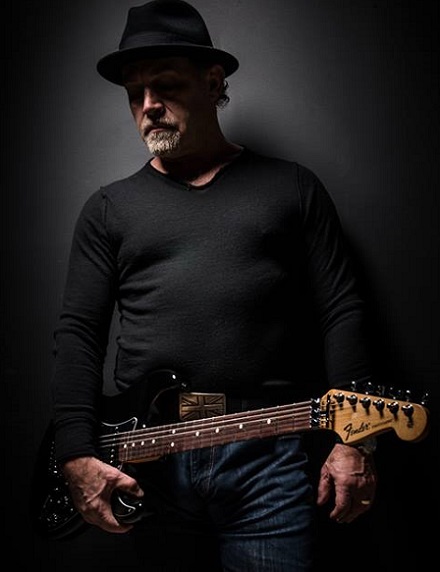 I am proud to be  a part of the blues community, the United States first indigenous musical art form. The fact that it was created by the anguish of blacks in the generations following slavery makes it unique in a way that can never be repeated.  That was a powerful driver for the music. The fact that whites picked it up and ran with it created an interesting blending of cultures that I think did its part, in some small way, in bridging some racial divides. And the music and lyrics are amazing.

"I do wish old school would accept new school a little more open mindedly. I have picked up on some animosity at times from the two factions. I love them both, personally."

It would be kind of cool to pick a day in the 50s to visit Chess records. It would be fun to see any of the greats work in a raw studio like that.