Q&A with veteran musician and producer Michael Wedgwood, an unassuming gentleman with an impressive CV

"Rock and Blues have always helped to erase the lines between races and cultures, and it's often the known musicians who stand up and speak out for the victims of these problems. I think music in general has a very great positive impact, although sadly it doesn't seem to be nearly enough!"

Mike Wedgwood: The Sound of Music

Mike Wedgwood is an English bassist, singer, songwriter and producer. He is related to the Wedgwood family of pottery fame. Wedgwood joined The Overlanders in 1968 following their biggest hit, a cover of The Beatles song, "Michelle", and remained with them until 1971. Following a stint with Arthur's Mother from 1971–72, he joined Curved Air in 1972, and played on their third album Phantasmagoria. When the band split, he remained with Sonja Kristina and helped form the new version of the band. They recorded the album Air Cut (and four tracks that would be released in 1990 on Lovechild) before breaking up again in 1973. 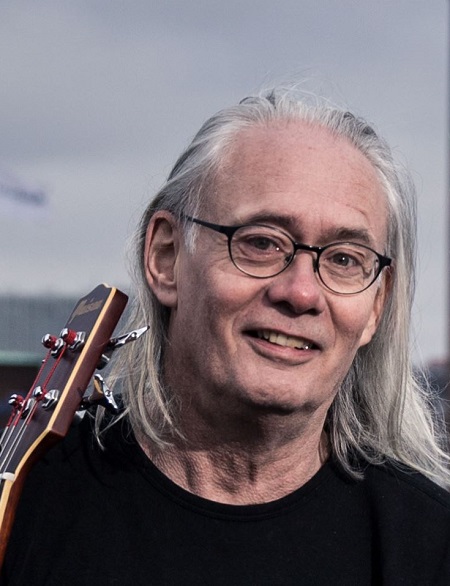 After playing in Kiki Dee's backing band on Elton John's Yellow Brick Road tour in England, and recording Elton's song Hard Luck Story, he joined Caravan, in 1974 and remained with them until 1976, playing on the albums Live at Fairfield Halls, 1974 (released by Decca in 2002, which was actually his playing debut with Caravan), Cunning Stunts and Blind Dog at St. Dunstans.

He worked with Gordon Haskell from 1993 to 1995. Wedgwood now lives in Denmark, and is gigging solo, and with the Wedgwood Band, The Skriver Bjarnesen Blues Band, Stan Urban, and many others. The Album “About Time” (2017) is Michael’s third solo album, most of which was recorded in just two days at Silkeborg Musik Theatre. It is a departure from the ’70’s sound, and the sound consists almost exclusively of Michael’s voice, grand piano, acoustic guitar, bass and drums. It’s quite a personal album, with a lot of focus on the songwriting. He owns and runs Wedgwood Studio in Silkeborg.

That's a hard question! I started out being a typical part of the Rock 'n Roll culture - a hard life that often made me quite selfish and unfair. But I've learned that simple values and family can mix well with life as a musician, and life is a lot more fulfilling now.

To be able to play and sing blues music is a very healing thing. Much as the lyrics can often be very sad or painful, it's a great way to express yourself, and of course blues doesn't always have to be about pain. It can be very uplifting too.

How do you describe Michael Wedgwood sound and songbook? What characterize your music philosophy?

My music has been a wide variety of things. Mostly rock with a blues flavour. But also very influenced by my time in the '70's with the two progressive bands Curved Air and Caravan.

My classical upbringing has been a large influence, and later my time in the US. My "sound" was quite English and clean-sounding before I was in America, but then I learned how to express myself more in the way some of my favourite artists from the US do. I played a lot of blues in the 17 years I was there, and that gave me a depth which I might not have had if I had continued in the direction I was going before.

My latest album About Time is very acoustic and you could say it's more "singer-songwriter" - like than before. it still has some blues influence, but it's more natural sounding than before, and with more emphasis on the lyrics.

There are so many people I've met that had made a difference in my life. And some of the experiences I've had were unbelievable. While playing with Curved Air in the US I was lucky to meet Frank Zappa. He and his band were the main act at 2 or 3 of the concerts we played. He actually conducted the sound check for us because it was important for him that the opening act sounded good. Later, our violin and keyboard player Eddi Jobson joined his band. Zappa and his music was quite a large part of my life at one stage.

Touring with Kiki Dee as the support act for Elton John was also a very impressive experience. We got to see how such enormous stardom affects everyone involved in the show. Elton seemed rather insecure at that time, but he also seemed to be a very generous and caring man.

The best advice anyone ever gave me? "Be kind. Remember to be kind". Apparently the last words spoken at the last Grateful Dead concert. 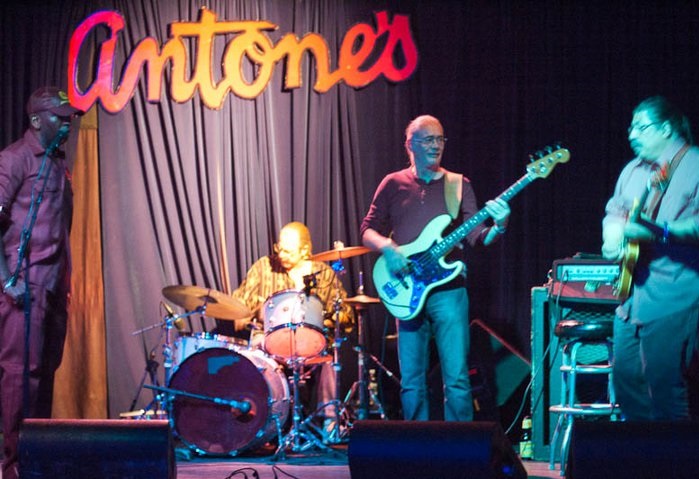 "My music has been a wide variety of things. Mostly rock with a blues flavour. But also very influenced by my time in the '70's with the two progressive bands Curved Air and Caravan."

I must have enough memories for a book! But putting them all together isn't at the top of my to-do list. I'm not very taken up with the past, although I do value it very highly.

I remember a concert in Italy where the conditions in the contract - especially the electrical requirements - were hopelessly wrong. In such a situation the band had the right not to play because of breach of contract, but the promoter produced a pistol and we were informed that if they were to shoot the tyres of our vehicles we wouldn't be able to go anywhere. He smiled and said "So you might as well play." We played.

It is interesting to look back and see who was opening act for who back then. Of all of our opening acts, Gary Moore was the most memorable for me. He had incredible talent for using his guitar to steer the emotions of the crowd (and anyone else listening!).

My most memorable studio session was when I arranged and conducted a 45-piece orchestra for John Entwistle of the Who's solo project. An indescribable experience!

I miss the youthful excitement which we had in the 70's. It seemed to break down a lot of barriers which we don't quite dare to pass now. Musically and personally. I miss the fact that back then we were breaking new ground and helping to set the way recording and performing would be done in the future. I miss the newness of it.

My hope would be that young musicians can experience the feelings we had. They probably do. My fear is, although the music of the 60's and 70's had proven to be a very lasting phenomenon, that eventually it will lose its charm and the lessons learnt from it will be forgotten.

That the chance to be heard by lots of people will not be reliant on promotion and image and commercialism, but on the talent and emotions of the musicians and the importance of the music.

What were the reasons that made the UK in 60s to be the center of Folk/ Rock/ Blues researches and experiments?      Photo by Frank Nielsen The musicians weren't afraid to try something completely new. Technology in the studio was beginning to give us seemingly endless possibilities, and our imaginations were allowed to be uninhibited. We were encouraged to come up with innovations, as opposed to having to conform to proven "hit" formulas. Of course that side of it was still present and we all had to put up with it at some time or another, but the freedom to create must have been the catalyst for the English success at that time.

"I miss the youthful excitement which we had in the 70's."

How has the British Underground era of the 60s influenced your views of the world and the journeys you’ve taken?

I hope I've taken the good parts of it and used them to good use. I think there were probably just as many negative influences that have affected me, and getting rid of them is not easy, but mainly the way we made music then has been my biggest inspiration.

Make an account of the case of the blues in Denmark and what touched (emotionally) you from the local circuits?

Blues is thriving in Denmark. There are so many very talented blues musicians here - young and older. I am so lucky to occasionally play with some of them. The fact that a lot of young musicians that have studied music at the Academies, just as well as lots who haven't had a musical education, have learned to be authentic in the way they interpret the blues. At the same time they manage to be individual and inspired without being just copies of the old bluesmen. It's knowing that, and the music itself, that touches me emotionally.

What is the impact of Rock n’ Roll and Blues music and culture to the racial and socio-cultural implications?

Luckily in Denmark we don't have as many racial or socio-cultural problems as many other countries, but I did live in the US for a long time, and it's very sad to see how bad these problems are there.

Rock and Blues have always helped to erase the lines between races and cultures, and it's often the known musicians who stand up and speak out for the victims of these problems. I think music in general has a very great positive impact, although sadly it doesn't seem to be nearly enough!

As I said, I'm very happy where I am now, so it's not important to me to jump in a time machine.

But if I had the chance I'd be on stage at a particular German festival where we played at dawn. As we played we watched the sun come up behind the 45,000 people who were there. They slowly woke up, and eventually all of them were standing and facing us. We gradually felt their involvement in our performance grow until it was as if the whole process was orchestrated. That's when a musician realizes that he's really a part of something far far bigger! 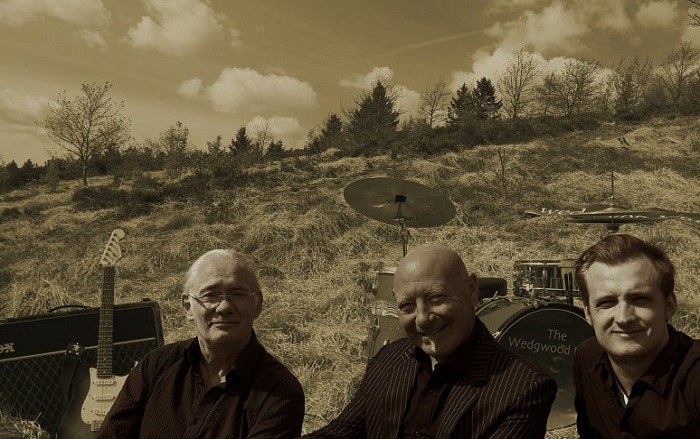