"The blues are born from struggle, hardship, and pain as well as lust, joy, and freedom. They represent the basic building blocks of the human experience."

“Daylight” (2017) is the debut album from Webster Ave, a trio of industry veterans out of the NE of the U.S. Fourteen original compositions produced by the trio of Tony Mercadante, David Webster and Andrew Caturano cover the spectrum of roots rock, jazz, Americana, soul, R&B and blues with a smidgen of reggae. David Webster, a native of Worcester Massachusetts, started playing acoustic guitar and 5-string banjo at age thirteen. Heavily influenced by the guitar stylings of Jimi Hendrix, Mike Bloomfield, Eric Clapton, and B.B. King, Webster has accompanied many roots and R&B artists including Chuck Berry, Bo Diddley and The Cadillacs. Dave moved to New York in 1973 where he worked as a writer and studio musician (Bob Dylan, Bette Midler, Peter Johnson, early Reggae artists and jingle sessions for commercial advertising). He signed his first song-writing deal with ABC Universal in 1979 and is also currently recording and playing live with his son, rapper, Chris Webby. Andrew Caturano has been playing since early childhood. He studied modern percussion at Manhattan School of Music and has performed on Broadway in “Godspell” and “The Magic Show”.  Andrew toured with Samantha Sang (“Emotions”) and has accompanied legendary performers Otis Rush, Otis Blackwell and Bo Diddley. He is a founding member of Howard Stern’s band, “Pig Vomit” and has recently released an instrumental CD with “Pig Vomit” guitarist Tim Curtin called “Short Order Guitarist”. He is currently writing, producing and performing music for radio, television and film for Pump Audio and Liberty Trax Music. Tony Mercadante started out as a street corner singer in the Bronx, not far from “Webster Ave.”. He picked up the bass guitar after serving in the US Navy and never stopped playing. Tony worked with Andrew and Dave in a popular R&B band know as ‘Streetkid” and was also a founding member of “Pig Vomit”. Tony has recorded and performed with artists such as: Otis Blackwell, Otis Rush, Peter Crisps, Ace Fridley, Howard Stern, Michael Monroe, Allen Freedman, Garland Jeffries, Kendall Carson and Carrie Rodriguez. He has recently been recording and performing with John Platania and Songwriter Hall of Fame artist, Chip Taylor.

What do you learn about yourself from the Blues n’ Rock culture and people? What does the blues mean to you?

David: I’ve learned that I share a kindred spirit with like-minded people who respond to the music on an emotional level. The blues are born from struggle, hardship, and pain as well as lust, joy, and freedom. They represent the basic building blocks of the human experience.

Andrew: Not to take friendships for granted and always be humble and continue learning. Music has been my life and, because of it, I've been schooled by many wonderful musicians. It means I should take the good with the bad. Find meaning in any and all experiences, whether a happy one or a 'blue' one.

Tony: At it’s heart, music is an emotional experience. That’s true no matter which side of the stage you’re on. Whether you’re a player playing, or a fan who’s listening.  I guess this has taught me to embrace the high’s and the lows of life and not take anyone for granted. The first thing I think of when someone mentions the blues is probably the Gunter Hotel in San Antonio. I passed it in the late 90’s and noticed a plaque on the exterior wall. Robert Johnson had his first recording session there on November 23rd, 1936. I was amazed that I could play this music and not know this important piece of blues history until I walked past the actual location and had to read it off a wall.

How do you describe Webster Avenue sound and songbook? What characterize band’s philosophy?

David: Our sound is as organic as we can make it. We purposely avoided over producing the songs and making something that we could reproduce live. The songbook is very eclectic, drawing from blues, rock, R&B, country, reggae, and folk. Our philosophy is to keep it real and to be true to ourselves as musicians. We’re older men now and have no reason to pander to trends.

David: It’s helped to eliminate borders and prejudices between different races and cultures.

Andrew: As quirky as our counter-culture may be, it’s shown me that we have more in common with folks from other cultural backgrounds than we may have thought possible.

Tony: I’ve always been someone who’s tried to think and act for myself. It’s possible this is why I gravitated to blues and all styles of music. I don’t like to follow trends, and “the blues” was never a trend for me. 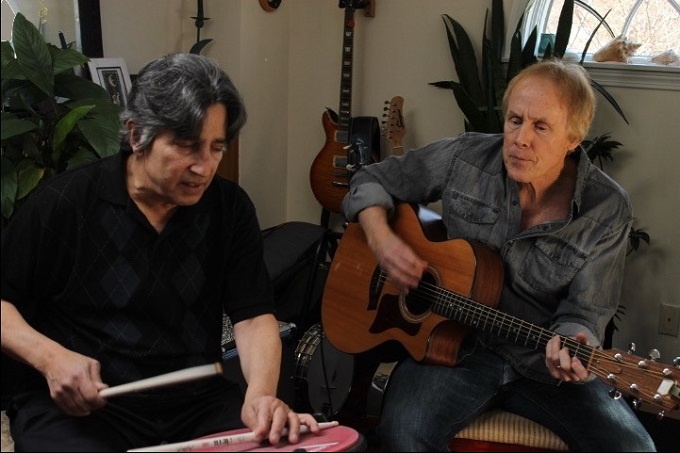 "I miss the soul and rawness that made these early records so “human”. Too many of today’s records are overproduced and sterile. I hope that people will tire of overproduction and return to a more natural approach, but I don’t see it happening."

David: Getting to work with masters such as Chuck Berry, Bo Diddley, and Otis Blackwell. Don’t eat the yellow snow.

David: I once played a few gigs with The Cadillacs, who had a big hit back in the 50’s (Speedo). During a dance routine, one of the members lost his footing and fell off the stage onto a table where people were eating. Food flew everywhere and a plate of food got lodged in a woman’s beehive hairdo…it was chaos! I’ve had a 45caliber revolver pointed at me during an argument with a club owner (who was drunk) who was trying to short change us. I was at a gig in the 70’s where a brawl broke out where about 75 people were slugging it out on the dance floor. After doing gigs for over 50 years, I could, literally, write a book.

Andrew: Otis Rush and Bo Diddley were professionals and they allowed us the freedom to play their music as we felt it.  Never forcing us to play anything we didn't feel within ourselves.

Tony: When I was 10 years old my Mom and Dad bought me a small record player and some 45’s. One of them being ‘Don’t Be Cruel’ written by Otis Blackwell and sung by Elvis Presley. It’s hard to explain how I felt listening to this song and it’s simple production. It was the first time I can remember being euphoric. I can honestly say that’s what got me into music. I’ll never forget the first time we rehearsed with him and he performed his music. I still have the cassette of that rehearsal. Most notable was the lack of attention for these amazing talents.

David: That people could see past their differences and enjoy their common humanity.

Andrew: I miss the soul and rawness that made these early records so “human”. Too many of today’s records are overproduced and sterile. I hope that people will tire of overproduction and return to a more natural approach, but I don’t see it happening.

Tony: I don’t know if I necessarily miss anything. I love hearing the new roots artists today. Musicians of all ages writing and performing some amazing stuff. If I miss anything it’s folks not really singing a melody, just riffing over the music. The riffing is great and takes enormous ability but I miss some of the simple nuances of a straight-ahead melody. Dave is great at balancing his melody’s with his improvisations. I’m afraid folks will stop listening to and playing blues and all its derived elements (jazz, rock, R&B). I hope people start playing instead of computing. Technology is great but will it overwhelm the human elements of the music. "Our sound is as organic as we can make it. We purposely avoided over producing the songs and making something that we could reproduce live. The songbook is very eclectic, drawing from blues, rock, R&B, country, reggae, and folk. Our philosophy is to keep it real and to be true to ourselves as musicians. We’re older men now and have no reason to pander to trends."

What are the lines that connect the American music from roots rock, jazz, to Americana, soul, blues and reggae?

Andrew: The “lines” are your basic human emotions.

What is the impact of American Roots music on the racial, political and socio-cultural implications?

David: I think it levels the playing field and minimizes our differences.

Andrew: It reduces the barriers that separate different groups…music is the great equalizer.

Tony: I think music in general and performing music specifically (recording, live on stage, live on your home porch) lead to what, I believe, is a global language. I have so many culturally diverse friends where our only connection is, we have played, wrote or recorded together at one time or another.

David: I would spend a day hanging out and playing with Ray Charles. In my opinion, he was the greatest singer of all time and my biggest hero when I was young. I’ll never forget hearing “What’d I Say” the first time. It made me realize that there was something out in the world for which I had no frame of reference …it was like being transported to another world. I had a similar experience when I heard Jimi Hendrix for the first time…like when I heard Mike Bloomfield play with The Butterfield Blues Band…like when I heard Eric Clapton play “Steppin’ Out”… or B.B. King “Live At The Regal” and on and on.

Andrew: I’d spend the day playing with The James Brown Band during its heyday.

Tony: In the 70’s there were clubs in Manhattan that allowed you to see some wonderful players. Folks like Cornell Dupree, Eric Gale, Richard Tee, Gordon Edwards.  These folks had a wonderful grasp of the blues and it’s derivations. I’d like to spend an evening in one of those clubs from back then.