"Boogie Woogie is so infectious. It’s the beat I think that keeps it going -kind of like rap for kids."

San Diego's Queen of Boogie Woogie, Sue Palmer, has amazed audiences all over the world with her unique style and phenomenal left hand. She delights in creating an atmosphere reminiscent of the small clubs and cafes of 1932 Paris, Harlem, West Texas and Hawaii. Best known for her beehive-wearing stint with blues diva Candye Kane in the '90's, Sue Palmer has been making her mark in the last decade with her high energy band, the Motel Swing Orchestra, and her flashy Boogie Woogie stylings. 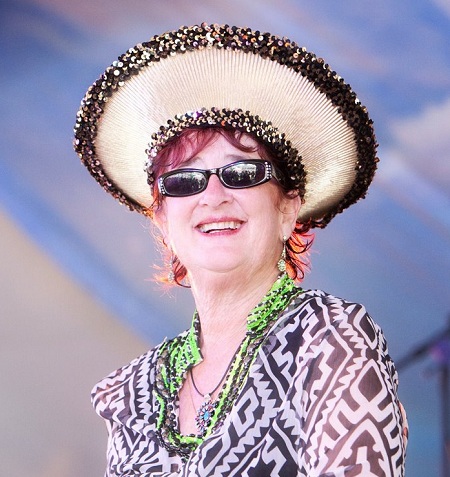 Wearing a couple of pounds of big cocktail rings on each hand, she wails through a very complete blues keyboard vocabulary like the veteran she is. She has performed with many of the legends of the boogie genre, playing double piano with Marcia Ball, Hadda Brooks, Sonny Leyland, Steve Lucky, Jeannie Cheathem, Ricky Nye, Mr. Boogie Woogie (from the Netherlands), Mike Seeley, Caroline Dahl, Wendy Dewitt, Lisa Otey, and Doña Oxford.

Sue, known widely as San Diego's Queen of Boogie Woogie, has been honored by her city for her cultural contributions by having a day named after her (March 25th, 2008), played at the Arches Piano Stage in Cincinnati, won the International Blues Challenge in Memphis for Best Self Produced CD 2008 "Sophisticated Ladies" from the Blues Foundation, won numerous San Diego Music Awards for her albums and bands, including Best Blues Album 2010 for her first solo piano album "After Hours," and in December 2010, won the "Jim Croce Award for Excellence and Dedication to Music, 2010". Jan/Feb 2010 brought her a stint as Musical Director for the world premiere of Candye Kane's play, "Toughest Girl Alive," at Moxie Theatre in San Diego.                                                         Photo by Annie Libby

When was your first desire to become involved in music and what does “88 B/W keys” offered you?

I didn't really "decide" to be in music-I was born into a musical family, where everyone was expected to participate. Then when I really got the bug, at 12 or so, it was like a disease. ha I couldn't stop wanting to play constantly. My parents had given me piano lessons from 7-12yrs of age, so that was my instrument. I had a wonderful role model in my aunt, Tress Turner, who lived with us until I was 15. She played by ear and played every night after work. She also taught me to play the ukulele.

What do you learn about yourself from the Blues culture and what does the Blues mean to you?

The first time I heard a blues and realized what it was, was Janis Joplin, at about the age of 18 (that would be 1965).  She was singing Turtle Blues and I could hear the changes. That was the first time I knew I could play that too. Maybe because she was from Texas (like my mother) and was also white, I could relate. It sent me on my way to the rest of my life.

How do you describe Sue Palmer sound and progress, what characterize your music philosophy? My sound seems to be based on the rhythm I project. People smile and get up and dance when they hear me. I was brought up to play, to have fun doing it, and to be inclusive with it. Everyone is invited to participate however they can, whether playing, singing, clapping, etc.

"Music is what gives all of us the joy to live. I love to hear it and I love to play it."

Probably the highlight of my career is still my stint with the great vocalist and performer Candye Kane. Playing with her taught me how to maximize my own performing skills. Before I met her, I would play but didn't really know how to "perform". Candye really encouraged it and we played off each other. We also played to huge audiences (once 25,000 people in Le Mans France, where they have the car races.  When you have audiences like that, you have to do something BIG to keep their attention.

Why did you think that the Boogie Woogie music continues to generate such a devoted following?

Boogie Woogie is so infectious. It’s the beat I think that keeps it going -kind of like rap for kids.

My best and favorite meeting was when I did a show with the Queen of the Boogie herself, Miss Hadda Brooks. She had a wonderful career and was still a great performer, at 85. That was her next to last show before she died. What a great career. She was very fun, warm, and funny.  Wendy Dewitt and Philippe Lejeune were also on the bill.

One memory I want to share with you was the time I played in Greece, at the beautiful club, The Half Note.It was my first and only time in Greece and I loved it so much. We had kind of an unusual band: Candye Kane and myself (resplendent with my beehive hairdo), Candye's husband at the time, Tom Yearsley (of Paladins fame), Steve Geller on drums, and Chris Masterson on guitar (Chris is an albino man). So we were unusual looking to say the least, and must have appeared so to the Greeks. The city was preparing for the Olympics and all the ruins were so fantastic. Loved the food too!! "Probably the highlight of my career is still my stint with the great vocalist and performer Candye Kane." (Photo: Sue with Laura Chavez, Davina Sowers, and Candye Kane)

Since I play music of the past for the most part, I don't miss it so much. I've noticed that everything seems to come back around eventually. Boogie Woogie never goes away entirely and things get recycled in the new music.

I have 10 years of memories with Candye Kane, plus am still playing with her occasionally. I always said playing with her was like being in a B movie 24 hours a day!!  Life was very exciting, fun, sometimes hard and grueling, but never dull. One memory we always laugh about was when her hairpiece (called a pastiche), got stuck in my fishnets, while I was taking a solo. She was pretending to put her head up my dress, then got stuck and couldn't get out. We laughed forever about that. It was in Lincoln Nebraska at the Zoo Bar. I toured for about 3 weeks in Norway with Lavelle White and she is a character!!  She carries an 8 ball (a toy for children) and seriously refers to it constantly, hass lots of voodoo type practices. Kim Wilson was one of the first big "stars" I met, associated with Candye. He is a gentleman and a great performer. The Paladins are our homeboys here and I am very familiar with them, especially Tom Yearsley, who is like family to me. He is one of the, most creative artists I know. Everything for him is an art project. He and Candye and I did some wonderful gigs together, big and small. One of my favorite was one Valentine's Day, in a little coffee shop. We had a candlelabra on the piano, and I also played accordion. Tom was dressed like an Italian with a straw hat, and we strolled around the shop with his bass, playing sappy love songs, with Candye.  Roy Gaines made me very happy when, at a recording session, he told me I could really play. I definitely smiled. 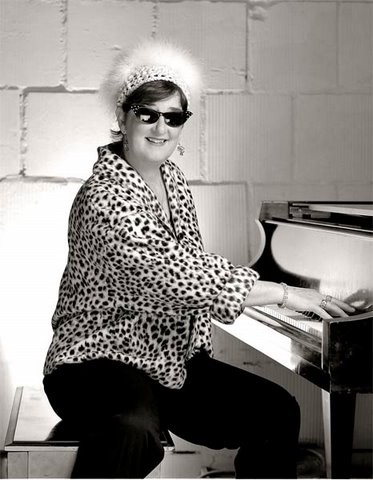 Not sure I would change anything. Time marches on and one has to go with the flow to a large extent.

"Boogie Woogie never goes away entirely and things get recycled in the new music."

What has made you laugh lately and what touched (emotionally) you from the music circuit?

Music is what gives all of us the joy to live. I love to hear it and I love to play it. Some of my best experiences have been hearing Latin Jazz in Cuba, and here in San Diego (Gilbert Castellanos is fabulous).

I would love to have been at the Cotton Club when Duke Ellington was playing with his Orchestra. So many wonderful moments, but things weren't all good then. Women could hardly do anything, everyone treated Afro Americans badly, and gangsters ran the clubs. I watch Boardwalk Empire with fascination, and enjoy the styles and music, but not sure I really would have liked to live then.