"I think Blues to me is a way of conveying your emotions through the music...It's a perfect vehicle!"

since starting playing, Midnite Johnny has worked extensively throughout the USA and has established a reputation as one of South Florida’s most powerful Blues and Rock guitarists. A lead/slide guitarist and vocalist specialising in Blues; Blues Rock; Classic Rock, and R & B, Guitar style reminiscent of Eric Clapton, Carlos Santana, Freddie King and Buddy Guy and a slide style reminiscent of Muddy Waters and Elmore James.
Midnite JohnnyOne of South Florida’s hottest musicians whose resume includes work with Bo Diddley, Harvey Mandel and many more. This veteran of the South Florida Blues scene employs a library of riffs from Freddy King to Otis Rush and Stevie Ray Vaughn along with his own original material off his debut album “Lyin’ Eyes”.
Now relocated in the UK Midnite Johnny is fast building a dedicated following this side of the Atlantic. With his band, he offers a wide ranging and varied array of Blues and Classic Rock… following a 3 month tour of Greece Midnite Johnny also now  performs as a solo acoustic artist and performed at The Warrington Blues festival. His vast influences and experiences take him to the place where roots of Blues meet the hard edge of classic Rock & Roll.

John, when was your first desire to become involved in the music & who were your first idols?
My first real "desire" to play guitar seriously was when I saw Jeff Beck play in 1976 in Miami Florida...That led me to Eric Clapton and the Allman Brothers as well as many others... discovering their influences led me straight to the Blues...basically, on a journey of discovery.. 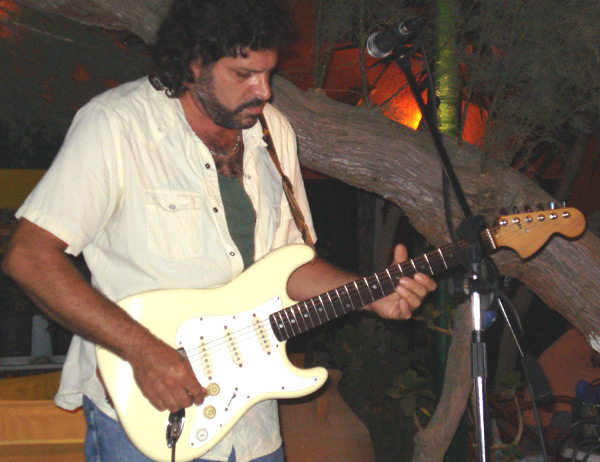 What was the first gig you ever went to & what were the first songs you learned?
The first songs I attempted to learn on guitar...was Sunshine of Your Love, Free Bird and Crossroads. We were in High School…we would play these tunes over and over...later on I realized these "guitar licks" come straight from the Blues....

What made you fall in love with the blues music?
The sound and the way it made me feel...and as I said, the connection of certain guitar parts the older Blues guys were playin' to more modern rock and how guys like Clapton or Billy Gibbons interpreted it...

In what age did you play your first gig and how was it like (where, with whom etc.)?
Our first gigs were in High School, We called ourselves Rebel.. Our first paying gig was 1980 at a place called Pizza King in Hollywood Florida...$20.00 each and all the Pizza and Draft beer we could hold!!! 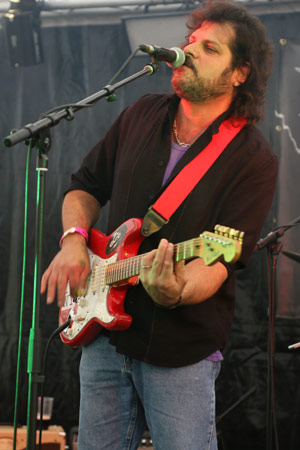 Which was the best moment of your career and which was the worst?
Too many good moment to really name one...Probably the best one's would be the unexpected guest musicians who would sit in with the band...(James Cotton, Mick Taylor, Robert Lockwood Junior and so on)...there are no worse moment ...even when things are tough, it's still "all Good"!!!

What does the BLUES mean to you & what does Blues offered you?
I think Blues to me is a way of conveying your emotions through the music...It's a perfect vehicle!!!!

What do you learn about yourself from music? What experiences in your life make you a GOOD musician?
Being a musician and especially playin' Blues has taught me how to connect with my soul and emotions...I do think as a player, to make this style of music sound "real" ..One must do some livin'!!...otherwise how can you relate to some of the lyrics your singin' about??

Do you remember anything funny or interesting from The Blue Midnite Blues Bar in Ft?
Back in the late 80's Jaco Pastorious was livin' in Ft, Laud…He would stop in the club on occasion when the band played...Harvey Mandel was in the band at the time…This is when Jaco's issues was gettin' the better of him...anyway, most times he would be cool, if things started to get out of hand...when asked, he would leave...On this particular occasion He wanted to hang out and hear the band..Jaco didn't have any money so I said…alright man, I'll buy you a couple of Heineken's no problem, but please be cool we got a good crowd tonight...Well he didn't waste ant time...He went into the men's room put some funky lookin' paint on his face and proceeded to go up to people and claim "I'm a full blooded Seminole Indian" ..Well we were playin' when this was goin' on but I saw my Dad grab Jaco by his collar and escort him out the door...When we were on break I remember Harvey told my Dad…You had the honer of throwin' out the greatest bass player in the world!! My Dad replied, I don't care who he is, every time he comes in here he causes problems... 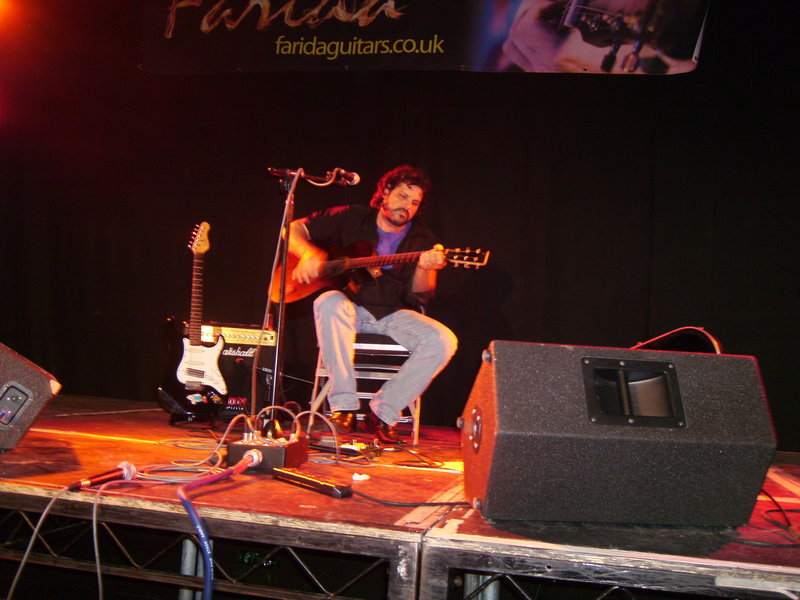 What are some of the most memorable gigs and jams you've had?
First one that comes to mind is when I was with a band called Kilmo and The Killers...early 90's. We were doin' this gig in Ft. Lauderdale Florida at a place called Cheers...The Allman Brothers did a show up the road at Sunrise Musical Theatre...Most of the band ended up in there that night...Warren Haynes one of the guitarist wanted to sit in...which was great...I remember right from the get go this guy was just an amazing guitarist and singer...about 2 songs in we did Further On Up The Road...he motions to me to start tradin' licks with him...Now I was still fairly young in those days so this is like a big deal for me!!...All I can remember is the sweat porin' off me...but I think I held my own!!

You have played with many musicians. It must be hard, but which gigs have been the biggest experiences for you? And why?
I don't know about biggest experience for me...but my favorite memory is when I was playin' with Bo Diddley..We had a show in Ft. Lauderdale and my family all came out...My daughter was there as well…she must have been like 5 years old at the time...At one point in the show Bo walked off the stage and motioned to my daughter to come over...then he started dancing with her...that's a very special moment for me.. 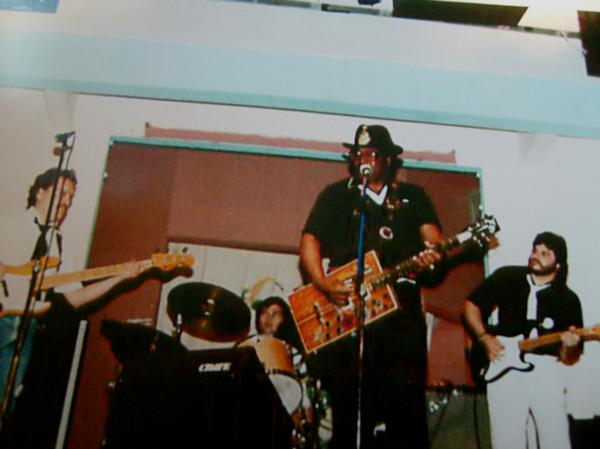 Are there any memories from Harmonica player Thom Doucette, which you’d like to share with us?
Many memories of Thom "The Ace" Doucette...he was a very interesting character to say the least...Most of which I can't tell here...but I will say he was and still is one of my favorite harp players...when Tommy "was on" nobody could touch him!!! You know he was at all those Layla sessions...Him and Duane came in from Atlanta for those together...Thom had these cassette tapes of some of the goings on between takes...very interesting!!!!

Which of historical music personalities would you like to meet? From whom have you have learned the most secrets about blues music?
I guess the standard answer would be Robert Johnson...but I always thought Elmore James would be pretty cool to hang out with!!! It's funny when I was younger and sometimes even now...I would have these weird dreams of the old Blues guys showin' licks and chords...I would wake up and grab my guitar and sure enough I would figure some of these things out…The brain works in some mysterious ways at times...at least mine does!!! 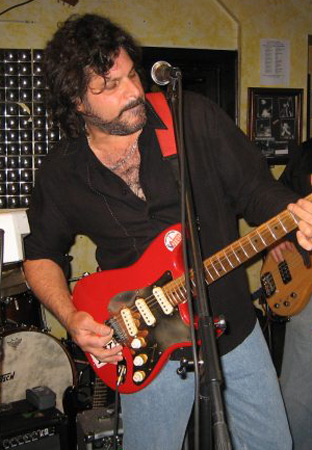 What characterize the sound of Midnite Johnny? How do you describe your music philosophy?
If you take equal parts of Magic Sam, Freddie King, Albert King and Albert Collins and sprinkle in Eric Clapton, Dickie Betts and Jeff Beck...Hopefully it comes out soundin' like me!!!

Of all the people you’ve meeting and work with, who do you admire the most?
Someone I never got to play with but got to hang with was Albert Collins...What a real nice dude!!!  Showed me how he tuned his guitar once...Drank a whole bunch of Jack Daniels too!! Yea I definitely would had him to my "Most Admired" list...and then Eric Clapton...mainly for his approach to his playing...

Some music styles can be fads but the blues is always with us.  Why do think that is? Give one wish for the BLUES
Blues music is still happening because it was never a fad...it's a way life or looking at life...I don't have to wish anything for Blues music...that style will always be with us!!

Tell me a few things about your meet & work with Harvey Mandel?
I met Harvey when my family had The Blue Midnite...He had recently relocated to Florida from California...I believe he had played with some local rock bands and some friends brought him in...He sat in with us...We asked him if he wanted to play with the band and ended up playin together for 4 years...I really learned a lot from this guy for sure...We did a lot of cool gigs with Harvey that we normally wouldn't have gotten if he wasn't in the band...some good times...I wish it had gone on a bit longer.. 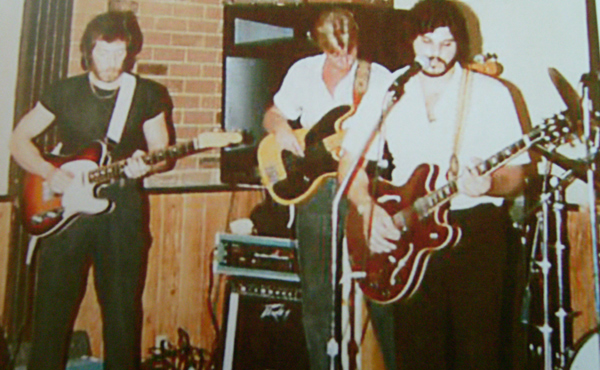 Alive or dead, who is the one person that you’d like to meet face to face if they were alive, and talk to over boozin?
This is an interesting question...but the first person that comes to mind...is John Wayne...I would love to have some drinks with "The Duke" for sure!!!

What is the current state of the live music scene in South Florida…and UK where you live now?
Well I've been livin' in the U.K. for two years now...I have a great band (all British musicians) Tim Franks on drums (he worked with Jack Bruce, Paul Young among others) Norm Helm on bass (recently played bass for Jerry Donahues recent UK tour) Brian Cook-keys (Brian has recently done some work with guitarist Elliott Randell)...We are doing well...being contacted by people like yourself always helps the cause... Not much left for me in South Florida these days...seems some of the originals guys from like the 80's and 90's have been sidelined...Lots of younger guys getting' "The Accolades" ... To me something is missing in some of the playing, that feel or vibe is not the same...almost in away somewhat forced!!! 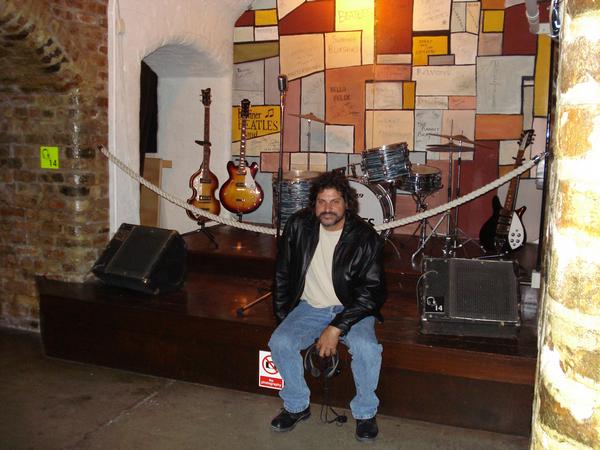 What is the “think” you miss most from 70s Southern Rock’s music nowadays? How you would spend a day with Allmans?
I do miss Southern Rocks "Hay Day" that's for sure...The 70's and early 80's were cool in Florida...I believe Southern Rock music is very similar to Blues...It will always have a market and an audience...The Allman Brothers are still goin' strong...

What turns you on? What are the things you’re most passionate about in life?
Nowadays.. I'm more focused than ever on my playing and writing...I'm hoping to record a new CD with the U.K. band soon...We are gigging fairly steady...definitely new horizons in store...I think being in Europe has opened up my creativity that's for sure... We are planning our annual Santorini gigs...Norm (bass player) and I will be going back again this season for 4 weeks...We'll do more of an acoustic act this time...Norwegian Blues Man Jolly Jumper joins us on Harp...Right now I'm just enjoying being in love with my beautiful wife Janet and playing the best I can with my band....