Stained glass artist Terri Robbins talks about her art, Blues in the Schools program, and Women in Blues

"Unlike some of the negative messages found in much music today, blues music is full of love, some sorrow, and many lessons. You just have to listen!"

Terri Robbins is an American artist. In the winter of 1977 Terri Robbins moved from Key West to St. Petersburg, Fl, and while in Key West she developed a keen interested in stained glass. She had a huge, glass, 5 gallon water jug and started saving her change in it until she had enough to send herself to "Stained Glass" instructional school.  Within a year opened a sole proprietorship, "Crystal Visions", in St. Petersburg, Florida, and embarked on her career in stained glass. Everyone knows glass is sharp and ridged, and her goal in most pieces she designed at the time was to make this course medium appear to be flowing, soft and smooth. Terri took on Art Nouveau as a challenge, which served her well.            (Photo by Donna DeGood Weitzel) 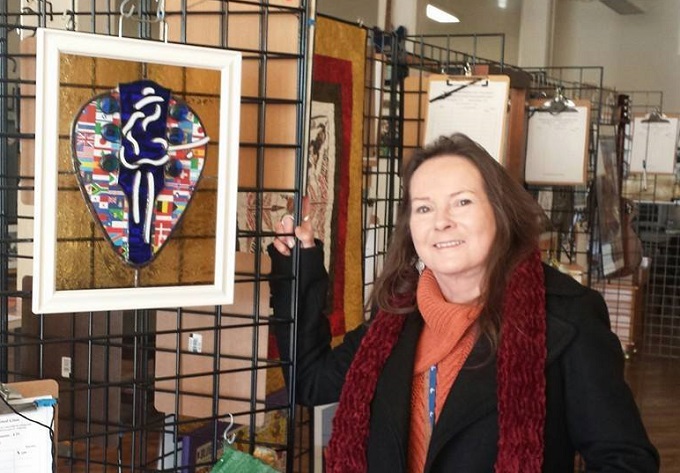 Later on, (back) in 2004, after volunteering for the International Blues Challenge one image caught her eye! This curved little guitar man stayed in her mind for several years! It was indeed a challenge, and after many hours of studying it, redrawing it, honing her skills in cutting "curves" she contacted Jay Sieleman, then President of The Blues Foundation, and asked him if she may try her hand at creating the Blues Foundation's "Blues Man" logo in glass. Terri would donate the piece to an Ebay auction, if she was successful. The piece below was her first attempt at recreating the annual Blues Foundation logo for the International Blues Challenge (IBC). She create and donate annual IBC logo glass renditions each year, as well as other event logos (Blues Hall of Fame and Blues Music Awards, Legendary Rhythm & Blues Cruise, Howlin' Wolf Blues Museum, Rock 'n Blues Museum/Clarksdale, her goal is to have a piece in every blues museum in the South!). Terri recently was asked by the Blues Foundation to create a rendition of Blind Lemon Jefferson for the new Blues Hall of Fame. She was honored beyond words. Terri spent much time on this! The only picture of Mr. Jefferson was taken back in the late 1920s. So, she created this piece. It is difficult to tell in a picture, but the guitar has strings, and the hands are 3-D. She’s proud to say this piece will be included in the grand opening of the new Blues Hall of Fame Friday, May 8!

Blues music means so many things to everyone that enjoys it. There is happy blues, sad blues, loving blues, story-telling blues, and so much more. Not only that, but it has no age, race or gender barrier! When I go to blues festivals and events there are young and old folks there, all sharing a common denominator, and the walls just come tumbling down and everyone has a common love and bond.

When was your first desire to become involved with the art?  How started the thought of Stained Glass? 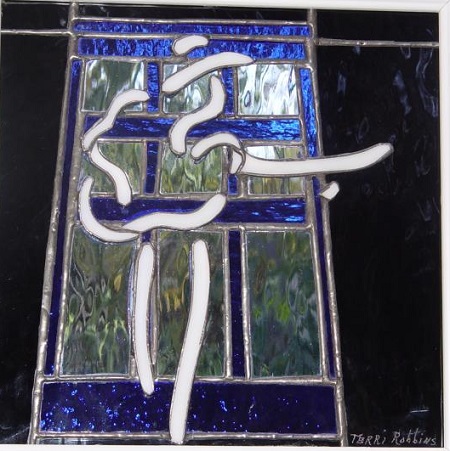 I have been a stained glass artist for half of my life. I saw, over a decade ago, that blues music, blues venues, and blues musicians were struggling to survive. The common phrase was "Keep the Blues Alive"! The Blues Foundation hosts the largest gathering of blues musicians in the world, the International Blues Challenge (IBC), and I wanted to be involved, help the cause, and contribute in some way to keep the blues alive. I was not rich, but I did have a talent, so I thought I would start creating stained glass art to donate for sale to every blues organization I could. Currently I have donated art to The Blues Foundation, the Howlin' Wolf Blues Museum, Rock 'n Blues Museum/Clarksdale, Mississippi, and most recently the new Blues Hall of Fame.

How do you describe and what characterize Terri Robbins artwork and philosophy?

In designing my glass art I've always been intrigued and fascinated with taking what is viewed as a sharp, jagged, cutting material such as glass and transform it into a seemingly soft and flowing beautiful thing. That is when the Blues Foundation's logo of the "Bluesman" caught my eye. Trust me, this is a very difficult little man to cut out of glass!

I am so glad you asked this question, because it means we are succeeding in Keeping the Blues Alive! I had mentioned before the reason I was first attracted to blues music was because it had no barriers regarding age, race, religion, or even nationality. I think people realize this and NEED this, with the world's turmoil today. Seemingly all judgments and prejudices are put aside during a blues event. This is very refreshing and healthy. 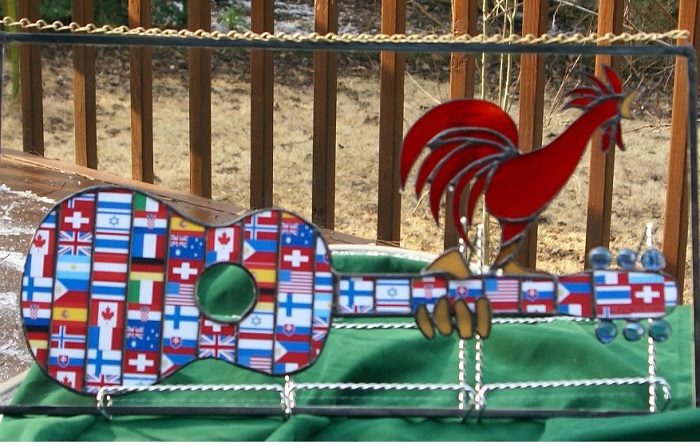 "In designing my glass art I've always been intrigued and fascinated with taking what is viewed as a sharp, jagged, cutting material such as glass and transform it into a seemingly soft and flowing beautiful thing." (Stained glass artwork by Terri Robbins / IBC logo by Jen Taylor)

I miss the authenticity of the blues. I love classic blues, rock blues, country blues... heck, I just love the blues. But, some may say it has strayed and become a tainted pool with rock. What most don't understand is that rock n' roll stems from blues music. It just had to change, as everything does in life. When I go to blues clubs today, most would not consider it "blues". I am not a purist, but I do miss the traditional style and would like to see more of it.  That is why I am so involved with Blues in the Schools (BITS) and have spent the past year in my area starting a Blues in the Schools program locally. We need to teach the young this valuable slice of history, so they can be history in the making.

That there would be a Blues in the Schools program across the universe, teaching young people, who really are the future, that there are deep roots in the blues, and that blues has a message. Unlike some of the negative messages found in much music today, blues music is full of love, some sorrow, and many lessons. You just have to listen! 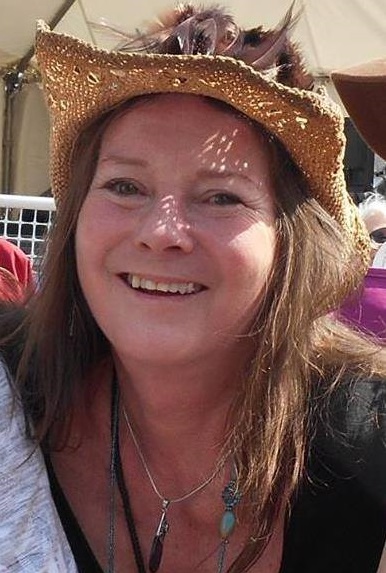 My partner, Michele Seidman, is President of National Women in Blues. I met Michele in 2006 and saw she was carrying a HUGE load, and I offered to help. Our goal is to level the playing field for women in Blues. Too often we attend blues music events and there are almost no women performing. I've even been told by festival promoters that nobody wants to hear women in blues. This is simply not true. Three years ago Michele and I had a discussion in my kitchen about bringing women together in Memphis during the International Blues Challenge. I asked, "What better time to get blues women from all over the world together in one spot"? In less than three months, with absolutely no budget, we put together our first "Women in Blues" jam, and we just had our 3rd "Women in Blues Showcase" last January that was standing room only before we even started the event. We donate all our money so far, and have never made a profit.  It's all about the Women in Blues!

What has made you laugh lately and what touched (emotionally) you from the International Blues Challenge?

I was at the IBC during the semi-finals, which is a very intense competition, and one of the girls from the Youth band division jumped on the stage with the band and began dancing! It "could" have been a disaster for that band, because each act only has 20 minutes, generally, and this young girl was stealing their thunder! But, the band took it as if it was part of the plan, and all was good.

Truthfully, I have so many responses to that question, this was the first one that came to mind. There are so many. The IBC is the highlight of my year (this was #14 for me!) and I have such a wonderful blues family it is like "going home" to a reunion.

Oh, wow. I think since I already know so much about the past 70+ years, I would like to travel to the year 2085 to see what other types of music is born from the blues, and I would take all the music I have collect, along with a wonderful book by Alan Lomax "The Land Where the Blues Began". 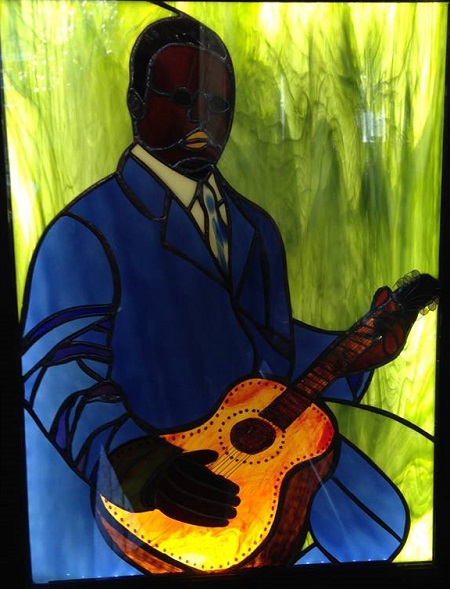 How you would spend a day with Bessie Smith and what would you like to ask Memphis Minnie?

A day with Bessie Smith would be spent walking through some cotton fields and listening to stories about her ancestors. I would like to ask Memphis Minnie to sing for me.

What would you say to Blind Lemon Jefferson?

Slavery was such a painfully horrible time, though, I believe good always comes from bad.. no matter how hard you have to look for it.

Are there any memories from gigs, festivals and meeting with blues musicians which you’d like to share with us?

There are so many special memories. This question took some wonderful soul searching and walks down "memory lane". I believe my favorite memory is: I have been an IBC judge for many years, and about 5 years ago I was walking down Beale Street in Memphis, Tennessee, on my way to my assigned venue, and I ran into a friend I had not seen in 45 years! She was a fellow judge! We were crazy hippies together back in the late 1960s (yes, I am old!). This is coming full circle!  When we knew each other back in the late 1960s we were into "Robert Plant" and now we were both into "Robert Johnson"!