Steven Dolins of The Sirens Records, on mission to preserve authentic Chicago blues, gospel and jazz

"I think jazz and blues is played with a lot of emotion so people appreciate that and therefore there is a devoted following." 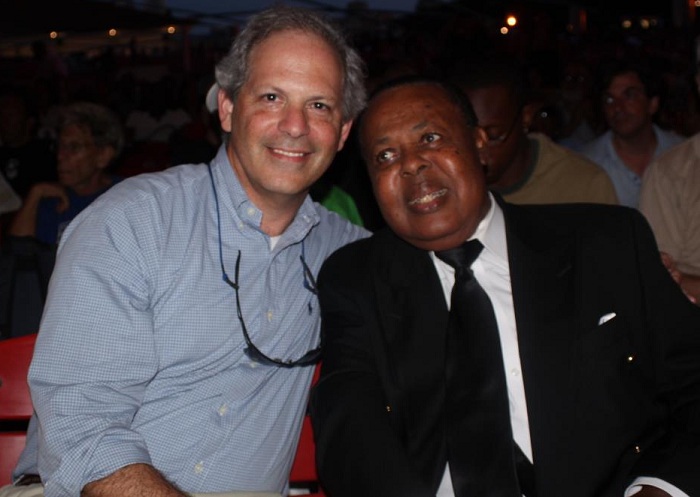 Dr. Steven B. Dolins, the founder of The Sirens Records and Eddie Robinson

Recorded Erwin Helfer’s “I’m Not Hungry But I Like To Eat – Blues!” which was nominated for a Handy Award and featured on NPR’s All Things Considered. In addition, Sirens’ recorded talented Chicago vocalists including Katherine Davis (blue and jazz), Kimberly Gordon (jazz), Sydne Evans (gospel), and Donald Gay (gospel).

In various ways, I learned about the blues from my immediate family in the late 60’s and early 70’s. My brother Barry, who started the Chicago Blues Festival in the 80’s and directed it for many years, had an excellent blues record collection.  My oldest brother Jerry used to take me to hear live music at the “Post”, where I heard Jimmy Rogers, Johnny Young, and Lee Jackson play with Bob Reidy. My mom used to drive me to the Jazz Record Mart to buy LPs. I was infatuated with boogie woogie piano. I loved the pulsating, hypnotic bass lines and the free wheelin’ improvisations in the right hand. One of the records I bought was Erwin Helfer and Jimmy Walker’s “Rough and Ready” on Pete Welding’s Testament Records. After hearing Erwin play at the 1972 University of Chicago Folk festival, I called him the next day and started taking piano lessons. I was hooked on blues and boogie piano at 16. I continue to play piano, which I enjoy, but I also understand the dedication and skill required to become a professional musician, which I’m not.

How started the thought of The Sirens Records? What has lured and captured (emotionally) you from the Blues world?

I originally started The Sirens Records in 1975 when I was 18 years old.  I re-released “Primitive Piano” in 1975 to learn the music business and recorded “Heavy Timbre” in the summer of 1976. I loved blues piano and I thought it was a “cool” thing to do, even though I didn’t realize I was releasing two of the best blues piano albums in blues history. I restarted The Sirens in 2001, and now my mission is to help musicians get their music released and heard. There were several deserving Chicago pianists who were overlooked because of their age and they were not self-promoting, like Earma Thompson and Geraldine Gay. I also continue to promote Erwin’s music. I like to think that I’ve matured; trying to fix/repair the world by promoting musicians who deserve to be heard and at the same time releasing some brilliant music. 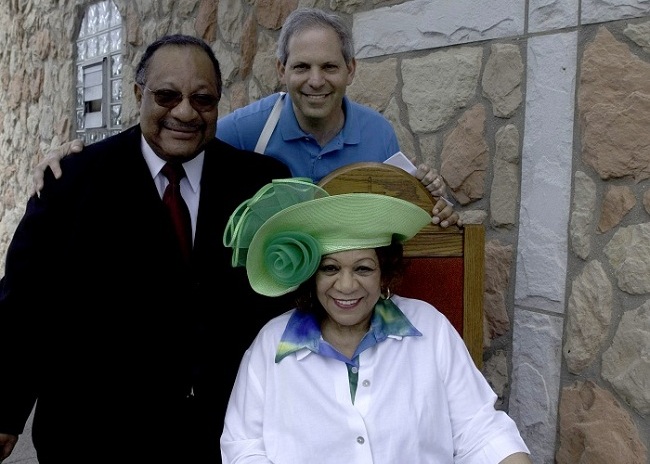 How did you choose the Greek name The Sirens? What has lured nearby (emotionally) you from the Blues world?

In 1975, my business partner and best friend David Goldberg came up with the name “The Sirens Records”. Probably not the best name for a record label because the name is heavily used by various vocal groups and also it’s not a name associated with blues. However, I do think it captures the alluring power of the music on my label. All of the pianists on my label have their own unique style – fitting for The Sirens. I also love the logo that Al Brandtner designed for me.

Seems like there are new challenges all of the time, so every period of life is interesting.  I’d say I had a tough time in 2001 when I tried to create a start-up, entrepreneurial IT venture for a large multinational corporation. That’s when I decided to restart The Sirens and start repairing the world one CD at a time. As a result, working on The Sirens again has become the best of times for me.

I think jazz and blues is played with a lot of emotion so people appreciate that and therefore there is a devoted following. Unfortunately, I think the music business does not always promote the best artists – they promote what sells- even some of the indie labels do the same thing. That’s where I have an advantage! The Sirens promotes/produces artists based upon my musical taste – not sales potential. 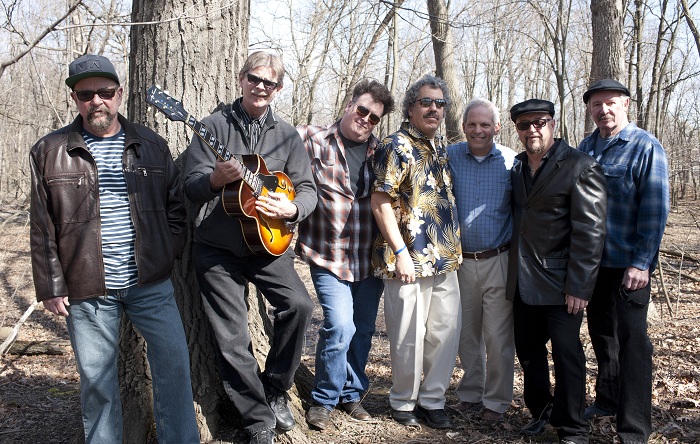 Do you remember anything funny from Erwin Helfer, Barrelhouse Chuck, Detroit Junior, and Pinetop Perkins?

I’ve taken piano lessons from Erwin and I’ve known him since I was 16 or for the last 40 years so I have lots of stories, too many to tell and they would not translate well in writing. He is a beautiful person and he is very funny despite telling a lot of lewd, bad jokes. Barrelhouse is hysterical and could become a comedian if he wanted. I usually see him for breakfast a few times a month. I always look forward to his phone messages which are especially amusing, where he imitates everyone from a pizza delivery man to a massage therapist. Detroit was a great guy; I remember him telling me he should have pursued a career in baseball rather than music though because it’s a lot more lucrative. I remember seeing Pinetop perform on his birthday in an Uncle Sam costume on the 4th of July (US Independence Day).

Almost all of the musicians I’ve recorded are my friends.  In addition to Erwin, John, Chuck, and Detroit, I became extremely close to Earma Thompson, Geraldine Gay, Donald Gay, Katherine Davis, Dwayne Mason, and Eddie Robinson. I cherish my memories of Earma and Geraldine; they were extremely wise in a down home folksy manner. I talked to Earma every day on the telephone and frequently visited with Earma and Geraldine.  Erwin also introduced me to Estelle “Mama” Yancey; she is the MOTHER of Chicago blues and the best female vocalist from Chicago EVER. She also had that same down home street wise philosophy. I remember John and Mama counseling me during some tough personal times and they really got me through it.

What are some of the most memorable gigs, jams and recordings with your label you've had?

The most memorable recording session for me was for Heavy Timbre, where I assembled the Dream Team of Chicago Blues Pianists – Sunnyland Slim, Blind John Davis, Willie Mabon, Erwin Helfer, and Jimmy Walker. The comaraderie and musicianship is awesome and can be heard on the recording.  To have all five pianists in one setting was historic. This session created lifetime friendships. For example, as a result, my brother Barry started booking Sunnyland, John, Erwin, and Jimmy – it started his career promoting Chicago blues musicians. I was already close to Erwin but I became very good friends with John.

Are there any memories from the famous Maxwell Street in Chicago which you’d like to share with us?

As a teenager I worked a lot of Sunday’s at Loyal Drugs on Halsted Street, about a block from Maxwell Street. I never saw Arvella Gray or Maxwell Street Jimmy Davis perform on the street but I did soak up the smells of polish sausages and onions grilling and the sounds of soul music blaring on stereos.

What do you miss most nowadays from Speckled Red, Billie Pierce, Doug Suggs, and James Robinson era?

I should mention that Erwin Helfer recorded the four musicians you mention on “Primitive Piano” in 1957, which re- released in 1975 and later in 2003.  It is a classic blues recording and essential listening for anyone interested in blues piano. Erwin was ahead of his time in rediscovering  blues masters and capturing them on vinyl.  Well, I’m not that old so I wasn’t around in that era. I did follow in Erwin’s footsteps and attend Tulane University.  In 1974, as a freshman, I went to the Tulane Jazz Archive’s and met the curator Dick Allen, who knew Erwin from the 1950’s. Dick called Billie Pierce in the hospital while I was at the Archives (on the 4th or 5th floor of the library) and I was able to extend greetings to Billie from Erwin; they were extremely close.  Billie passed away that fall. I did get to hang out with John Bentley and Roosevelt Sykes in New Orleans and of course hear a lot of Professor Longhair and James Booker.

What are your hopes and fears for the future of Blues and Jazz music?

Although I teach in a university, when it comes to blues and jazz, I think the best musicians are self-taught, learn from playing gigs, and learn from older masters. My fear is that this is no longer possible… I hope people and up-and-coming musicians will at least listen and learn from recordings by the masters. 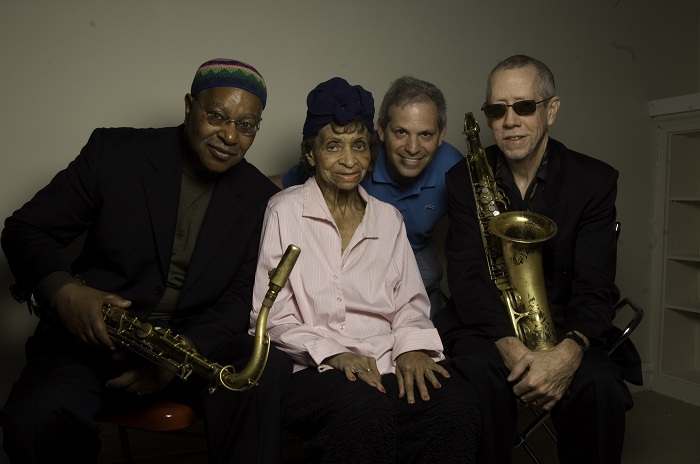 I always think of Jimmy brainstorming with me and coming up with the title Heavy Timbre. I was in the recreation room in my parent’s suburban home and Jimmy was in his south side apartment, probably only 40 miles away, but culturally and socially as far apart as possible. Even so, we had a great time shooting the breeze and coming up with best title ever for a blues piano CD.

What are the lines that connect the legacy of Blues with Jazz and continue to Gospel and World music?

Of course, the major connection between blues and gospel music was created by Georgia Tom Dorsey.  He was a great “hokum” blues pianist who migrated to Chicago and basically created and nurtured modern gospel music. So Chicago had the great blues pianists like Jimmy Yancey, Meade Lux Lewis, Albert Ammons, etc., but also great gospel pianists like Thomas Dorsey, Mildred Falls, Evelyn Gay, Geraldine Gay, and Eddie Robinson.  Fortunately, I have been able to record and feature Geraldine and Eddie.

I’ll reiterate what I’ve said before. The music industry is driven by sales and money and NOT quality musicianship. Although I am a professional computer scientist, I think the digital representation of music makes it difficult for consumers to discover and find non-commercial music. I relish the days of browsing LPs in the Jazz Record Mart, reading liner notes, and learning about music…

Do you know why the piano is connected to the Blues culture and what are the secrets of 88s black and White keys? 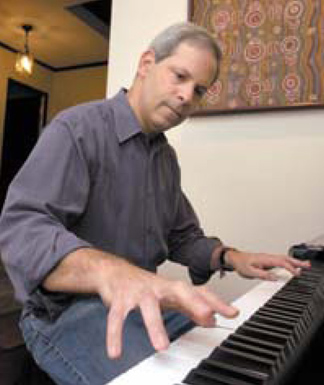 In Chicago, especially pre-WWII, blues piano was the king.  Besides Yancey, Ammons, and Lewis, there was Montana Taylor, Cripple Clarence Lofton, Pinetop Smith, etc.  House rent parties featured pianists, and so did clubs.  It wasn’t until post war blues where the electric guitar took over and “drowned out” the piano.  Even so, Muddy, Wolf, Sonny Boy, etc. always used pianists.  Now, clubs don’t even own pianos and blues piano is becoming a lost art.

Steven Dolins at the piano. Photo by Brian O'Mahoney

A painting capturing the camaraderie at the Heavy Timbre recording session.

I’d love to go to a house rent party at Jimmy and Mama Yancey’s apartment on 35th and Dearborn.