Talking with Lee Conklin, one of the great psychedelic artists, from Fillmore's posters to illustration work

Lee Conklin was born in New Jersey on July 24, 1941. He grew up in the small town of Monsey, New York, and graduated from Spring Valley High School in 1959. According to Conklin, he was always preoccupied with art during his school years, painting with an easel in his later teens.
After high school, Conklin attended Calvin College in Grand Rapids, Michigan, where he studied literature and philosophy and was again published as a cartoonist. He was released from active duty in may of 1967, at which point he located himself in Los Angeles, where some of his pen and ink illustrations were published by the Los Angeles Free Press. He looked for work as a cartoonist. 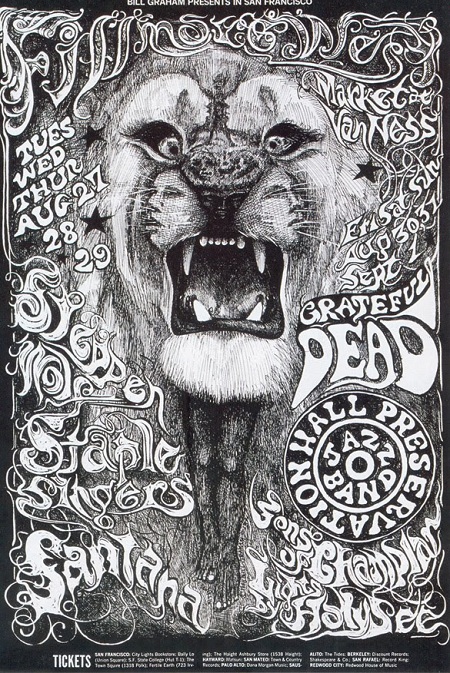 After reading in Time Magazine an article about the poster artists and music scene in San Francisco, he decided to relocate there. Upon arriving he went to the Fillmore Auditorium offices, where he showed his portfolio to Bill Graham. To Conklin's amazement, he was hired on the spot, and asked to create his first Fillmore poster that very weekend. Conklin rose to the occasion and went on to contributed 33 posters to the Fillmore series alone.
In the summer of 1968, after the first rush of the Fillmore era had passed, Conklin and his wife Joy left San Francisco and traveled throughout Northern California, living in an old bread truck. They eventually crossed the country, settling in Middletown, NY, very close to the town where Conklin was born. It was here that they started a family. During these years, Conklin worked in a psychiatric hospital as a therapy aide. He continued his art work in his spare time and sometimes would show his art at some of the regional art fairs in the area.
In the latter '70s, the Conklins moved back to Northern California, living for many years in the Petaluma area, which has been a home to a number of the poster people. Conklin worked with for many years with trees and reforestation projects.
Lee Conklin continues to produce art and has in recent years produced a number of art prints as well as posters for venues such as the New Fillmore series and the Maritime Hall.

When your first desire to become involved in art and what was first attracted you to psychedelic culture and art?

I was a "Johny come lately" to the San Francisco Poster scene (January 1967).

I spent much of the late sixties chained to my drawing board, which is my default mode anyway. A monkish (Art is my vocation not my profession) monogamist (47 years, so far) I missed out on the sexual revolution and was never really part of a "Psychedelic Community"

My first experiments in mind alteration in search of artistic inspiration centered around sleep deprivation, abetted by caffeine and nicotine. How and where did you get the inspiration for your art? 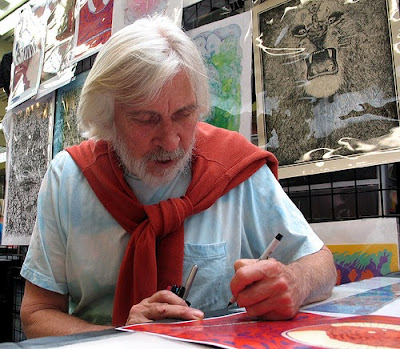 How do you describe Lee Conklin’s art?

I call my kind of art Cyberdelic Neo-roccoco.

What does San Francisco Acid Culture scene mean to you? What's been their experience from San Francisco’s psychedelic community?

While Acid may have contributed some imagery boost, designing a poster while under its direct influence is not an option. Cannabis for me has been the most effective way to summon the muse.

I missed out on the good acid, they tell me, and so I have little expertise.

You have come to known great artists and musicians in your time. It must be hard to pick, but which meetings have been the biggest experiences for you?

"Back in the day" I had no personal connection to my fellow poster artists and so no amusing tales. Fast forward to 2012, I find myself hanging out in a New York hotel room with Wes Wilson, David Singer, and John Seabury (Mouse was in the house as well, somewhere as were several other younger talented poster artists. We had the happy opportunity to spend some quality time together summoning the muse, drawing pads in hand. The television was on and the image of a construction crane atop an unfinished highrise appeared dangling in the 90 mph wind of Hurricane Sandy. "That looks familiar, "say I. The tube was unmated in time to hear "57th street" which sent us scurrying to the window and when we looked almost straight up, there was the broken neck and steel beak waving at us.

To learn the rest of this story and to learn about the current state of rock art in the San Francisco scene visit moonalice.com

Moonalice is a band of seasoned musicians who feel that live music should be a communal experience where the listener and musicians feed and derive inspiration from each other. Their songs try to speak to everyone, mixing a variety of genres with extended musical improvisations that evoke a sense of adventure and exploration. The band are: John Molo (Drums, Vocals), Barry Sless (Lead Guitar, Pedal Steel Guitar, Bass), Roger McNamee (Rhythm Guitar, Vocals, Bass), Pete Sears (Bass, Keyboards, Guitar, Vocals), and Big Steve Parish (Road Scholar/Medicine Man/Storyteller). (Pete Sears' Interview @ blues.gr)