Talking with Merryl Jaye, an artist who captures on canvas the emotion and spontaneity of blues & Jazz

"Blues and jazz can and does exist today as deep feelings and sadness for inspiration never changes...We can all relate to situations that create the feeling of loss, loneliness and emptiness at different times in our lives..."

Celebrated painter, Merryl Jaye's style is not only visionary, its irrevocably her own and unmistakably recognizable. Her beautiful scenic vistas evoke a romance and majesty of nature as if seen through the eye of a free-spirited impressionist who paints in today's world. She manages to capture an innate understanding and sensibility of light. Her love of brilliant color and unedited, painterly brushstrokes seem as if she could have daubed them onto her canvas on the left banks of Montemartre. Raised in Southern California, Merryl began painting at age twelve. Fascinated by performing arts, she also studied and sang light opera, winning multiple scholarships. In her late teens, Merryl served her country by entertaining the troops in Vietnam with the USO. After a successful career as a songwriter, recording artist, and having appeared on stage and television, she chose to follow her true passion: painting.

Like her gift of music, Merryl's art has a harmony of composition. Her subject matter consists of people or places you feel you've known before.

Merryl's deep background in music is also a major influence in her artwork. This allows her the sensitivity and understanding to capture on canvas the emotion and spontaneity of jazz in live performance. Merryl began painting portraits of the jazz greats in 2005. Selected for their preeminence in their field, her subjects have been vividly rendered, using a fresh, contemporary, expressionistic style. This successfully harmonizes the twin mediums of art and music. She recreates an uncanny likeness of her subjects and even more importantly, captures their true essence.

As a child, I was naturally introverted. I found a friend in painting at about age 12. I was influenced and encouraged by an elderly next door neighbor who was taking painting classes and suggested I try following her course as she found I was so drawned to painting....My first paintings were surprisingly accurate and fluid that she continued to encourage me...This achievement gave me an early sense of purpose and happiness.

What characterize the philosophy of your art, how do you describe Merryl Jaye’s progress? 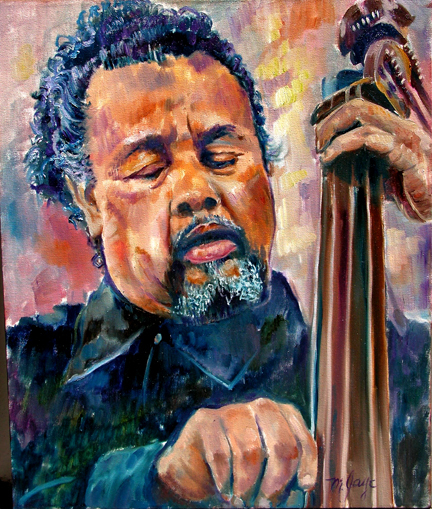 I was never one for planned academic schooling. My philosophy of art is one of natural discovery. Progress is as simple as the continued discoveries that are gained by just attacking and completing the next painting. Never stop moving forward...

"I particularly love to paint the faces of the black musicians for their pure original attributes."

What is line that connects the legacy of Jazz music and culture with the visual art and beyond?

In my most recent jazz portraitures, I feel the true connect with valued culture. This music holds our most important and deepest roots of our culture in artistic expression, as it is alive and organic. My attempt to capture the expressions of these jazz talents in motion is my main goal.

My mother accidently discovered I could sing after insisting I take lessons as she thought it may help my shyness - music being an outward espression. I won a scholarship singing light opera at age 14. I ventured into many varied musical journeys from light opera, to musical comedy and later country and rock, but could never attain the looseness and spontaneity of blues and jazz.  Painting those very subjects, came easy to me and seemed a better way to achieve that thought. As I grew older, I naturally learned to loosen my strokes to properly capture that illusive spontaneity.  I’m not sure exactly how that happened, but I am grateful for the magic!

Perhaps the steadiness of the talents in blues and jazz and their ability to continue to grow with or without commercial success is a testament to their valued contributions in music. The explorations of improvisations make them unique. No other music has the daring and soul of change. 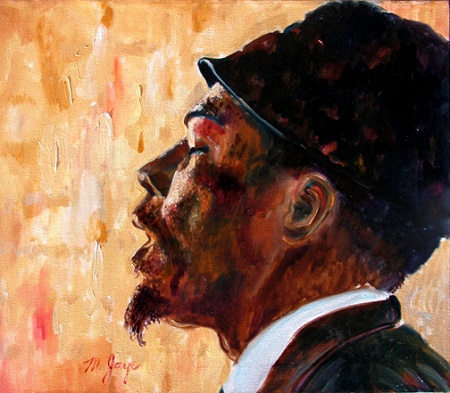 I think my early and most fulfilling pieces are that of my Thelonious Monk, Lester Young, and Tom Waits paintings, for example. They came to my canvasses quickly and surprisingly satisfying. Tom Waits is many things rolled into one. His writings are experimental, deep and hauntingly beautiful, for a contemporary composer...something entirely different and unusual...Monk and Lester Young were also experimental geniuses in their time.

So to capture these talents properly and have them hanging here in my studio gives me great pleasure...I feel so rewarded when other viewers feel the same....

For me, music and art are a part of me...I must listen to music while I’m painting...I listen to classical music, I love the Russian composers, such as Rachmaninoff...I also listen to jazz musicians and singers, such as the great band leader Gerald Wilson, and Billie Holiday and also I love Bill Evans, Dave Brubeck, and Miles Davis and many more....

B.B. King is a favorite of mine and Eric Clapton in the rock and blues arena.

Who from THE MUSICIANS you have drew and paint, had the easiest pure original attributes for your painting?

I particularly love to paint the faces of the black musicians for their pure original attributes.

Would you mind telling me your most vivid memory from your inspiration to make a portrait? Which memory during of your progress makes you smile? 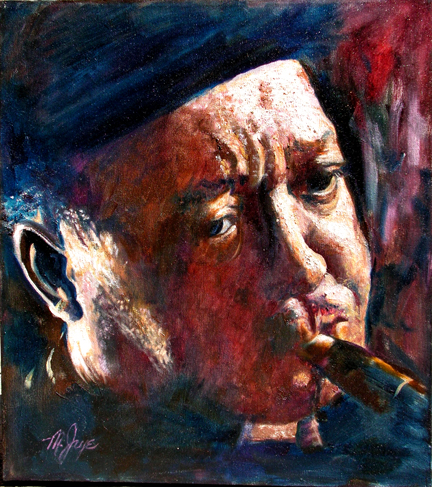 My most vivid memory of capturing a portrait comes from the close-up Lester Young painting...Its where I began to paint with the most emotion and spontaneous strokes to adapt to one of the most important jazz musicians of all time....I was in the "zone" of creativity that cannot be explained and surprised myself with the outcome!....Yes, that indeed, made me smile!!

The most difficult for me to paint are the musicians that are not African American...For some reason, the African American faces are more interesting to tackle, not that they are more "gifted", but just seem to have more feeling in their faces.

What inspires me to paint certain musicians is their individual importance to the jazz world. The special talents of these greats are unavoidable as they have each given something new and inventive to their craft.

What is it that makes different the person and personality of Jazz musicians that want to draw?

The personality of these jazz talents are often intertwined with their music...Luckily, I have met several...Bud Shank, was very down to earth as his music designates...Chick Corea, was friendly, open and spiritual, as his music is expansive and original and accessible.

Yes, blues and jazz can and does exist today as  deep feelings  and  sadness for inspiration never changes...We can all relate  to situations that create the feeling of loss, loneliness and emptiness at different times in our lives....and out of that comes this rich music... "Perhaps the steadiness of the talents in blues and jazz and their ability to continue to grow with or without commercial success is a testament to their valued contributions in music."

My hopes for the future of art are simple...Experiment and growth in subject and point of view is all important and should continue and will continue as always...My fears is the digitalization of art becomes too important...Organic art is always supreme and although experimentation in technology is an advancement of sorts, the two should never be confused....

No one musician can become the likeness of the past greats like Dizzy, and Parker...That's what so interesting about their music...there are no duplicates in their craft...The challenge is to always be original and make a mark of a new and exciting way to approach a musical thought...Hopefully there will always be new ideas that rise to the top and lead in a new and wonderful path.

The best moments of my career are the discoveries that come naturally and spontaneous in painting...I surprise myself from time to time with a painting that flies out quickly...and the audience response is equal to my delight...This came in a painting of jazz arranger and composer Johnny Mandel. The response to this piece has been rewarding..... 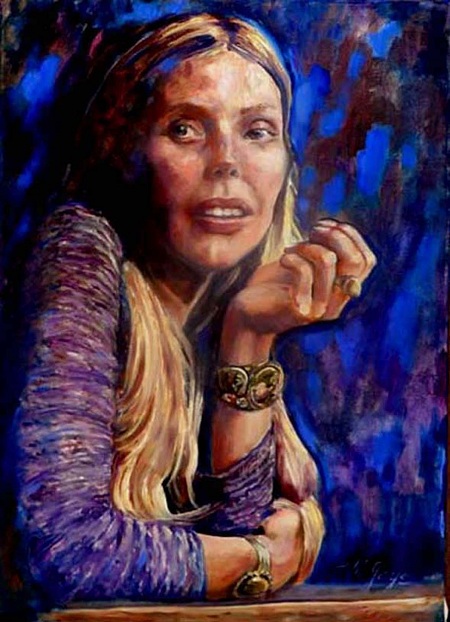 Of recent, I discovered an album by Joni Mitchell called "Both Sides Now" produced around 2000...I was moved and deeply touched by her natural approach to jazz as her readings of lyrics seem to be so real and straight from the soul. The years, and apparent smoking habits resulted in a sympatico deep and richer voice...I listen for hours to this one album while painting...I have done a couple of paintings of her and I will include the latest one I did last month.

How you would spend a day with BB King?

I adore B.B. King and would love to chat with him about his duo performance I was lucky enough to see with the great jazz guitarist Kenny Burrell...That was something...

What would you say to Coltrane?

If Coltrane allowed me to sit with him, I would just want to hear him talk to see what his thoughts would be about life in general, other than just music...

To me Tom Waits is so brilliant and has such an expanded mind...again, I would just want to hear him talk...But I would ask him where he got his klezmer influence from...