"The Blues is what we once were, it’s who we are, and it’s who we may become, it’s impact touches the sole." 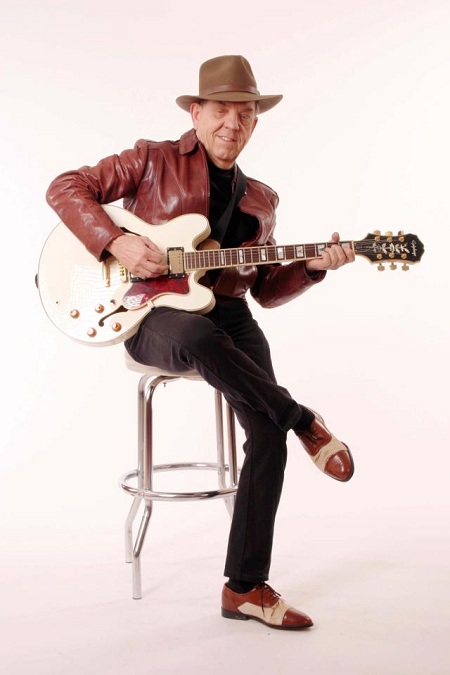 For a man who has spent most of his adult life as a traveling bluesman, Leo Hull has a veritable plethora of stories to tell. And, in his latest album, "Bootleggin' The Blues," we are treated to several of them, all humorous and containing life-like characters that he has no doubt encountered along his journeys.

Dubbed the "Texas Legend," Leo is originally from Oklahoma, and picked up the guitar as a young'un after seeing his dad play slide with a pocket knife. He went to Dallas in the early Sixties with his Silvertone guitar, and never looked back. And, he'll tell you straight-up, as he does in the set-closing "Between You And Me," a tribute to many of his departed idols and mentors, "if you ain't played the blues in Texas, then you ain't played the blues!"

Leo Hull one of the most respected figures on the Texas Blues scene - raucous, high energy blues, roadhouse romps, searing guitar licks, infectious melodies and a terrific sense of humor - plus outrage, optimism and belief in the redemptive power of music. Leo and his band Texas Blues Machine perform more than 200 shows per year. Leo Hull & The Texas Blues Machine was nominated for best Blues Band in Texas by the Dallas Observer.

Leo, when was your first desire to become involved in the blues & from whom have you have learned the most secrets about the blues music?

I’ve been a blues fan since I was around 7 years old. My first exposure was from my dad Ira Hull.  He loved to play and sing the Blues especially the country style Blues of Hank Williams and the Electric Blues of Muddy Waters & Jimmy Reed, I can still hear dad playing slide guitar on a Silvertone Acoustic using the back side of a Case Pocket Knife. It’s a sound that I will never forget. To me the untold secret to the Blues is the Groove and the discipline required to maintain it. I learned that from Jimmy Reed. Which memory from the road from Oklahoma to Dallas at 60s makes you smile?

December 1964 snow and ice storm going through the Arbuckle Mountains, in my 1963 Corvette Stingray Convertible with snow tires. Had been touring in Canada and had to put snow tires on my Corvette. I was the only guy to make it up the winding mountain road that night. Looking back I must have been road weary or crazy or both, I don’t know which, but one thing I can tell you is I don’t know if I would do it again, (but at the time it seemed like a good idea and I made it to the top).

The Blues to me is a daily challenge, I love to tell stories and that’s what Blues is all about to me The Blues has offered me a way of expressing my thoughts and feelings and putting those to music in hopes it will have a lasting effect on someone who may hear it. That makes me want to write another song.

My style of music is TEXAS ROADHOUSE BLUES, I have been called the King of Texas Roadhouse Blues. That may be stretching it a bit, but one thing is for sure. When you come to one of my shows you know exactly what you are going to get. Exactly what is on my recordings, I do all my recordings live in the studio there is no overdubbing and adding tracts and adding this and that and all that crap. What you hear and see is what you get, no more or no less. You will either like it or not and that’s O.K. with me. 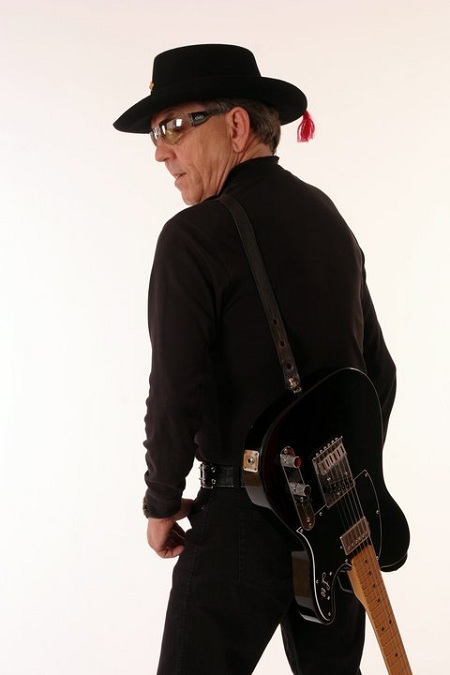 What do you learn about yourself from the blues music? How has the blues changed your life?

I learned that you are as successful as you allow yourself to be. Other people do not control your destiny that is between you and God.  The only limits we have in music are the limits we place on ourselves, the amount of time, energy and money devoted to a project is usually directly proportional to the level of success we achieve, locally, regionally, nationally, or internationally.

The Blues allows me to be who I am. In my song Road Hard there is a lyric that says it all: “I REALLY DON’T CARE WHAT YOU THINK ABOUT ME, YOU AIN’T GONNA GET ANY MORE THAN WHAT YOU SEE, I’VE BEEN ROAD HARD AND PUT UP WET A TIME OF TWO, AND THAT’S GONNA HAPPEN IF YOU GROW UP AND PLAY THE BLUES.” That’s the facts of life.

How do you describe your philosophy about the music and life?

The Blues evolved as a means of communicating news from town to town in the south, telling stories some truth and some fiction. To me the blues represents what’s going on in society yesterday and today and tomorrow it’s what I see and what I live. “Life is short and times to fast, you better live every day, cause it ain’t gonna’ last,” and that is the way it is.

What experiences in your life make you a GOOD musician and people?

Every day I have three objectives I try to accomplish, they are 1. Make some little kid laugh out loud. 2. Make some old person smile and feel good about themselves. 3. Make everyone who comes in contact with me have a better day because they met me, if I can accomplish that through my music then that makes me a better Musician.

How do you get inspiration & what do you think is the main characteristic of you personality that made you a blues songwriter?

I am very fortunate to have the ability to see things in life and talk about what I observe and what I live in the form of songs. I believe songs and inspiration are instantaneous. These thoughts, phrases, hooks, float through the mind and when one comes your way, you have to be prepared to act on it. t may be with you only for a fleeting moment and if you cannot capture it on tape or paper it will be gone forever. I write about what I see in clubs from the stage. How people act and react to situations presented to them, society in general day to day challenges we all face. 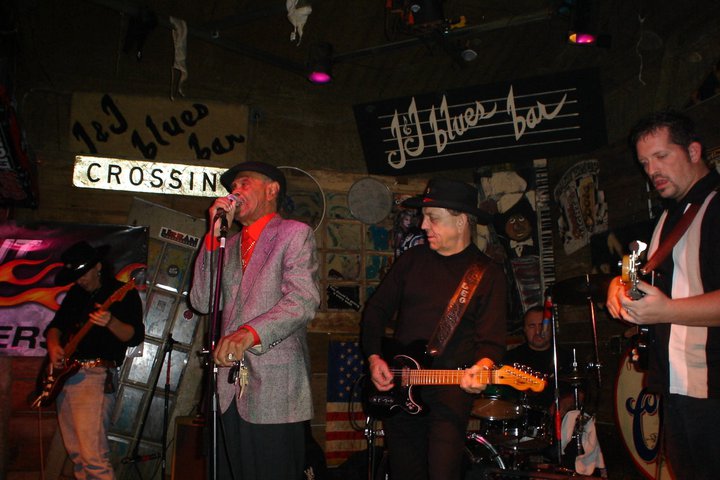 I have been blessed, I have always had a great career in music every day I get to go up on stage and perform I am thankful. It’s hard to conceive that I actually get paid for doing the thing I dearly love and that is singing and playing the blues. I have never had a bad day in the music business.

Are there any memories from the barrooms and the road with the blues, which you’d like to share with us?

When you listen to my songs you will ascertain that most of what I write about is what I see and live and much of it happens right there in the audience at the moment, if I can capture the moment in the form of a song then put it to music then it has been a good day.

I try to live in the moment, always looking forward and seldom looking back, I don’t try to second guess my decisions, I make them and live with them.  The most interesting period in my life is what I am experiencing now at the moment because in the twinkle of an eye it could all be gone and I don’t want to someday look back and say “Gee I wish I would have done this or that” that’s not living, that’s dying, regrets are a form of death.

It’s because of the history, the Blues is what we once were, it’s who we are, and it’s who we may become, it’s impact touches the sole.  It is the essence of life that is the Blues. I would hope that every person who comes in contact with Blues Music would enjoy it as much as I do. My all time favorite blues men from the past is the late great Jimmy Reed and Hank Williams.  Jimmy’s Blues has had more influence on the music groove today in my opinion than any artist in modern history.  Hanks writing and delivery of the message is unequaled. Hanks music works with one guitar or with a symphony orchestra. It transcends all music boundaries. Yes, I would like to do a session with Jimmy Reed and Hank Williams, to me they are the roots of today’s modern blues.

I like all styles and types of Blues and Blues Artists. What I really appreciate in an artist is one has a message that makes sense and can deliver that message both vocally and musically in the most simplistic form. That’s what Blues is to me.

Learn and study the masters of the craft. Study their style and delivery and see if any of that knowledge can be implemented in the creation and delivery of your music. One of the things that I see in blues today is many performers trying to be something they are not. The main difference in Blues performers are, some play other peoples Blues music very well and some Create and Perform their own Blues music very well. I prefer the latter.

If you are a cover musician doing other peoples music, make it your own, and if you don’t know what that means, someday you will.

From the musical point of view is there any difference and similarities between: Texas Blues and others local scenes?

I’m sure there are, but Texas Blues has a certain type of groove that sets it apart, it’s that rough driving groove with an attitude, that’s the best way I describe it.

Blues Rock’s Roots are in the South and Texas is a big part of that scene. Not enough credit is given to Johnny Winter, remember, Johnny was Rocking the Blues long before it became popular to do so. Why did you think that Texas Blues, continued to generate such a devoted following?

It’s hard not to like a sound that makes you want to get up off your Bar Stool, and move your body. The Texas Blues Groove will make you want to do that.  It doesn’t matter if it’s Long John Hunter, Johnny Winter, or Leo Hull.

What are you thinking when you are on stage, how would you describe your contact to people? What’s your energy like?

When I’m on stage, I remember Blues is my business, and my fans have paid good money to see me perform, therefore I am obligated to give them the best performance I can possibly deliver on any given day. I feed off the music, my energy level is always very high, I do not drink or smoke on stage, or allow any of my band to do so, that in my opinion is the true signs of an amateur.

Just to keep on creating and playing the blues, that is what turns me on, Happiness in my next show.