Much like fellow funkster Lenny Kravitz, Loomis played every instrument on his debut and ‘Ain’t Just Temporary.’ The debut entitled ‘Hamilton’ was under Grammy consideration, an impressive feat for a self-released debut indie record.

Hamilton Loomis’ Live In England (2009) release captures Loomis masterfully blending his myriad of influences into his live performance, at once forging ahead into hip musical territories while maintaining a strong connection to the blues legends that took him under their wings at a young age.

Born and raised in Galveston, Texas, Loomis was first hooked on music through his parents’ extensive collection of blues, rock, and soul records. Loomis honed his multi-instrumental chops early, learning drums, piano, guitar, bass and harmonica by his early teens, and toured regularly as part of his family’s doo-wop group.

At age sixteen he went backstage to meet Bo Diddley, and before the night was over Loomis was onstage playing alongside the legend. Since that meeting, Diddley quickly became a friend, mentor, and supporter. “INNOVATE, DON’T IMITATE”…Diddley’s words continue to inspire Loomis and fuel his desire for originality. The Rock and Roll Hall of Fame member said of Loomis, “You got to put some seasonin’ in what you’re doin’, and this boy’s got the whole salt shaker!”

One of the young artist’s fondest memories was when Diddley took his iconic hat off mid-show and crowned it on his head, as if figuratively passing on the torch and proudly declaring Loomis as the legitimate heir in line.

Bo Diddley first appeared on Loomis’ debut. And Diddley’s last ever recorded song is “You Got To Wait,” from Loomis’ 2007 Blind Pig release ‘Ain’t Just Temporary.’ The co-written track featured both Diddley’s unmistakable voice and tremolo guitar for the last time. 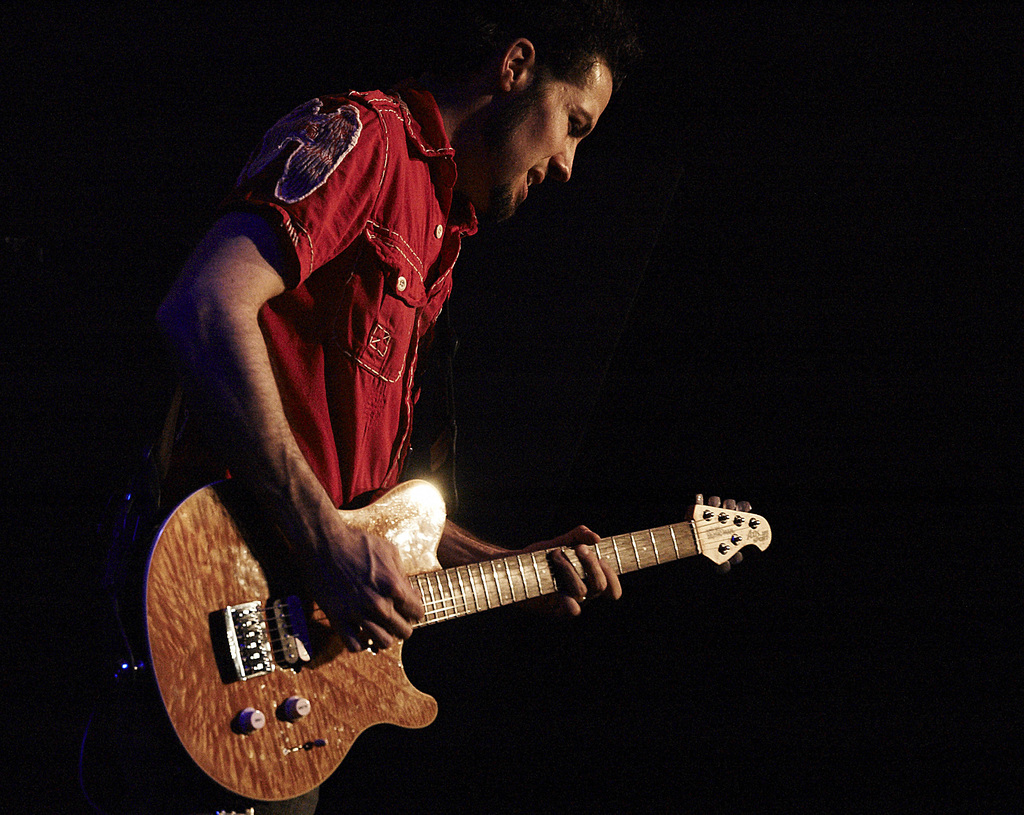 Other Texas blues legends such as Joe Hughes, Johnny Copeland, Gatemouth Brown and Albert Collins schooled Loomis early on in the finer points of the music, recognizing the youngster’s talent and potential. By the time he turned eighteen, Loomis had performed in front of thousands at the Delta Blues Festival, and he was writing, arranging, and performing his own material.

A series of self-released CDs followed, including 1996’s ‘Just Gimme One Night,’ 1999’s ‘All Fired Up,’ which the UK’s Blues Matters said was “so strong and confident that it has your vote two bars in.” Loomis’ 2002 release, ‘Live-Highlights,’ captured what his crowd-pleasing show “is all about, and that is powerful Blues, Funk and Soul,” according to Twelve Bar Rag magazine. “There is not enough room here to point out all the good things about ‘Live-Highlights!’”

Within Loomis’ live show and thus the new record, listeners will enjoy funky rhythms, booming horns, powerful yet refined harmonica and Loomis’ soulful vocals coupled with his stellar guitar work. As has been his trademark, it’s another refreshing approach that manages to avoid blues clichés while staying true to the heart of the music.

Hamilton, when was your first desire to become involved in the blues?

My parents had a great record collection of blues and soul music, so I was interested since I was very young.

I loved listening to Freddie King, Gatemouth Brown, BB King, and many others.

I got to play onstage with Johnny Copeland, Gatemouth Brown, Joe Hughes, Albert Collins, and Bo Diddley when I was still a teenager.  These were experiences I’ll never forget. 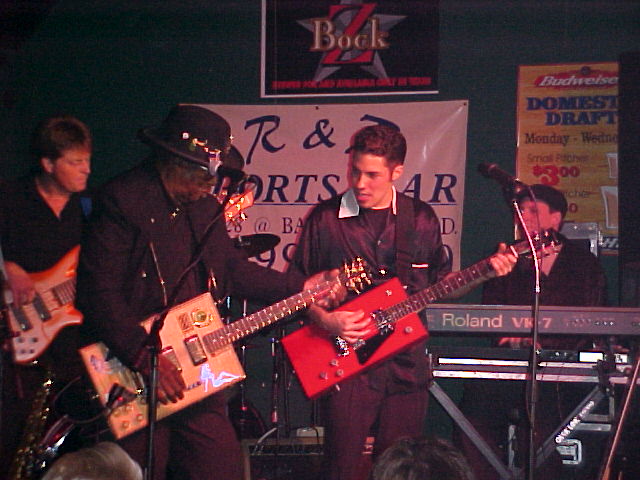 It’s difficult to say who was the best because all artists have a different style and a different approach to music.  I can say that Bo Diddley spent the most time with me collaborating, so I’m very grateful to have known him.

It has changed so much over the years.  I think originally (over 100 years ago) it would have been a way of life for many, but nowadays I think it’s just a way of expressing how you feel or simply telling a story that someone can relate to.

I think the best moment was the first time I played with Bo Diddley. He put his hat on my head and called me “the next Bo Diddley”.  I can’t think of the worst time, because I feel like anytime I’m making music it’s a great time.  Even a “bad gig” is a good gig because I’m still making music. 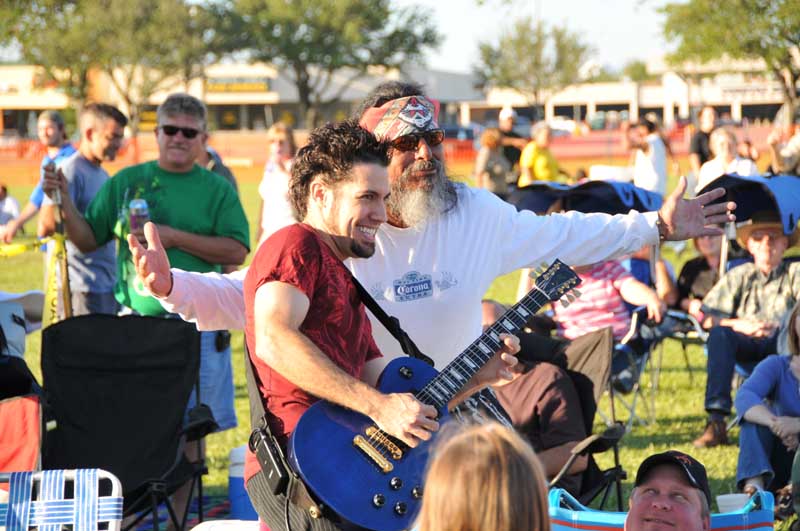 I have my first ever live DVD video which will be released in January 2012, so I’m excited about that.  Other than that, I plan to record another studio CD in Spring 2012, so we’ll see what happens after that.  I just look forward to playing bigger venues and festivals and be in front of as many music fans as possible.

How is your relationship with the other Texas blues musicians?

I have many musician friends in Texas, but we don’t get to see each other much because we’re always performing.  We all stay friends, but we’re glad we stay busy because we’re all trying to spread Texas music around the world.  I’d love to come perform in Greece sometime…I’ve never been there, and my Father’s family is of Greek descent, so it would be great to learn more about Greek culture.

I’d just like to have my own identity…Bo Diddley always gave me the advice to not copy anyone.  He said “innovate, don’t imitate”. 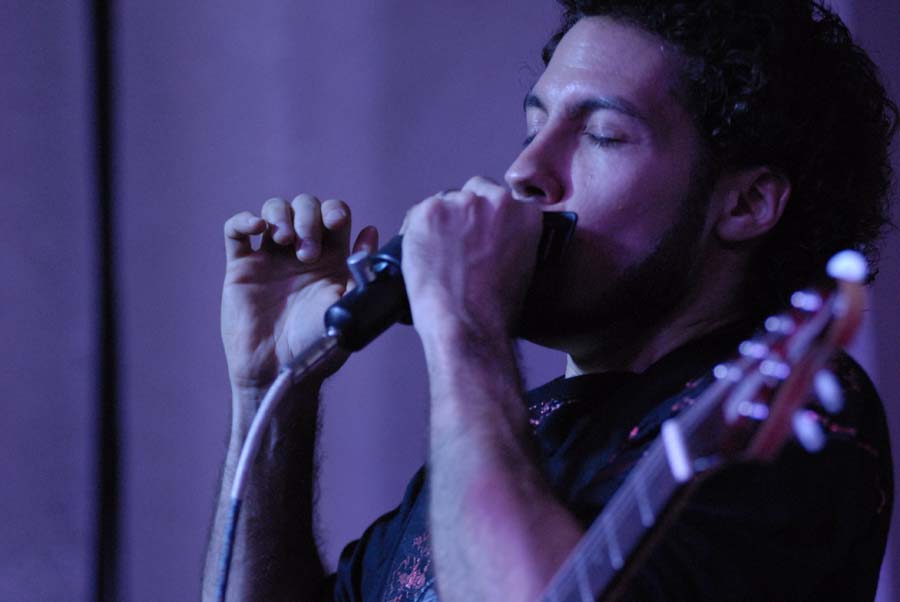 I hope to see all of you very soon!

Blues is the foundation of all our popular American music, so I have a deep respect for Blues and all the hardships our predecessors endured.  Even though my music is more modern and funky, it is rooted in blues and has a foundation there.

I wonder if you could tell me a few things about your meeting with Bo Diddley.

When I was 16, I went to his show and went backstage to get an autograph.  I played guitar for him backstage and later he got me up on stage to play a song.  I was excited and scared at the same time.  After the show he gave me his phone number and we became friends.  We did many shows together, and recorded together.  I’m very grateful for his generosity and his advice. 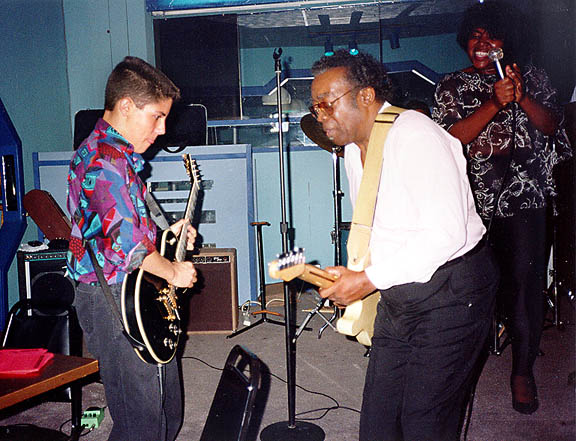 What does the Blues offered you?

Being involved with Blues and Blues artists has given me a great musical education and foundation for creating my own music.  Because of artists like Joe Hughes, Johnny Copeland, and Gatemouth Brown, I was able to learn from the masters.

I love to make a connection with the audience.  I like people to be able to feel the music I’m playing.

I think it was when I was a teenager, because that’s when I was able to play with and learn from the great blues artists who were still alive at that time.

Well, I really play MUSIC, not only blues.  I grew up listening to all kinds of music in addition to blues, so you can call it many different things.  But deep down, you can hear blues in my music, and I love injecting my music with blues because of the emotion it can convey to the audience. 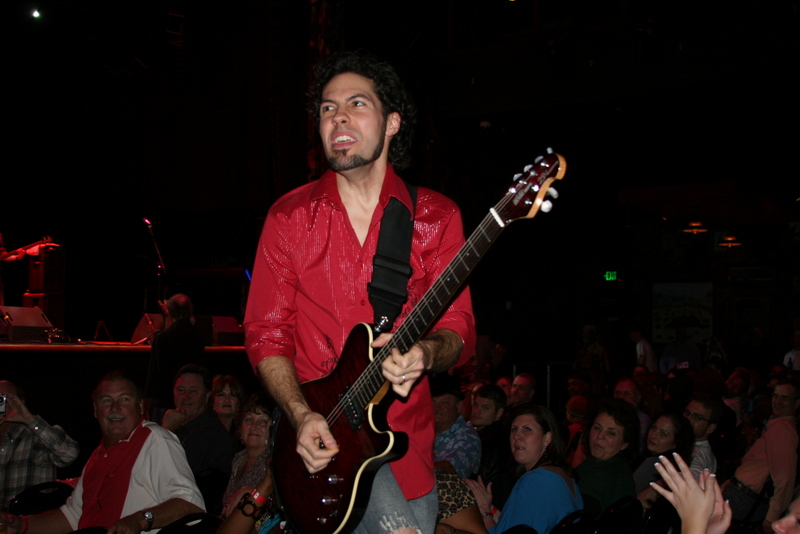 Actually, my first live concert was the Beastie Boys when I was 11 years old!  Like I said earlier, I grew up listening to all different styles of music, including what was on the radio and what was on MTV.

I just bought “Superheavy” which is a supergroup made of several famous artists.  It’s a very interesting blend of styles, which I like.

What would you have given to Albert Collins?

A big hug and a thank you.

You have traveling all around the Europe. What are your conclusions?

I enjoy how Europeans have a deep respect and appreciation for American roots music.  I hope to do many more tours in Europe.

I don’t have much free time these days, but when I do I usually relax and enjoy a good movie.

Robert Johnson – I’d like to find out the inspiration behind all the famous songs he wrote. 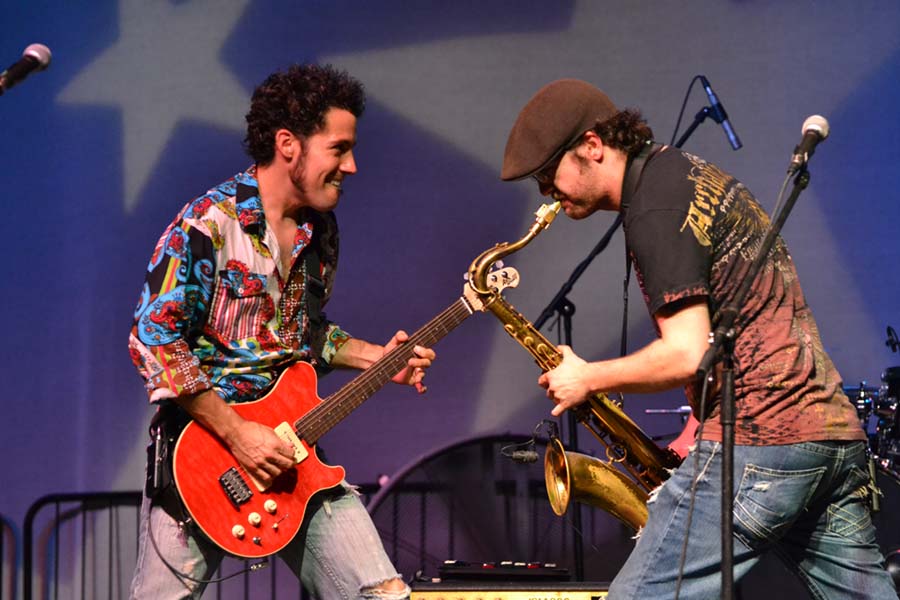 Maybe you could email me some mp3s?

Who knows?  I’ve seen untalended people get famous from media saturation, and also extremely talented people get discovered on the strength of their talent alone, so every situation is different.

What your opinion about reality like “America’s got talent”, “pop idols” etc?

There are many talented singers out there, but it’s a challenge to be an “artist”.  I prefer to see singers who also can play instruments and write great songs. 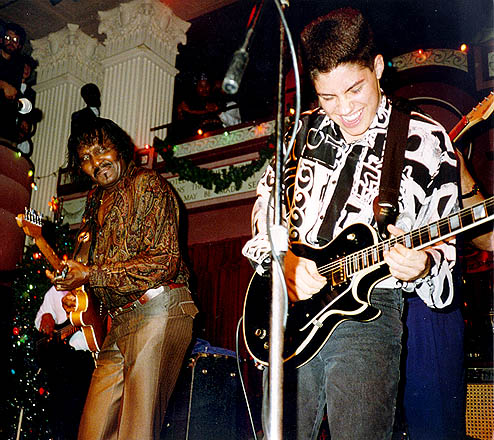 They were generous to let me perform with them.  I think they recognized that the young white guitarists (like me and many others) would help carry on their legacies when they were gone.

Three words to describe your sound & your progress.

I practice jazz when I’m alone.  It’s very challenging but can be very beautiful.

What do you think of Blind Lemon Jefferson?

It’s a means of expressing myself when words cannot do the job.

Do you have a favorite song, and is it one you worked on?

I have hundreds of “favorite songs”, so I can’t name just one…

My family is musical, so I’ve been playing since I was a little kid.  I think I always knew I’d do it for a living.

Well, Bo Diddley was the one who encouraged me to be original, so I took that thought and tried to make my music stand out in some way.  I always loved the songwriting of artists like Stevie Wonder and Prince, and I loved the arrangements and sound of Stax soul music.  I also loved the lyrics of Willie Dixon, who wrote so many famous blues songs and had a clever way of using metaphors and descriptive words.  I think this combination of elements makes my music sound the way it does. 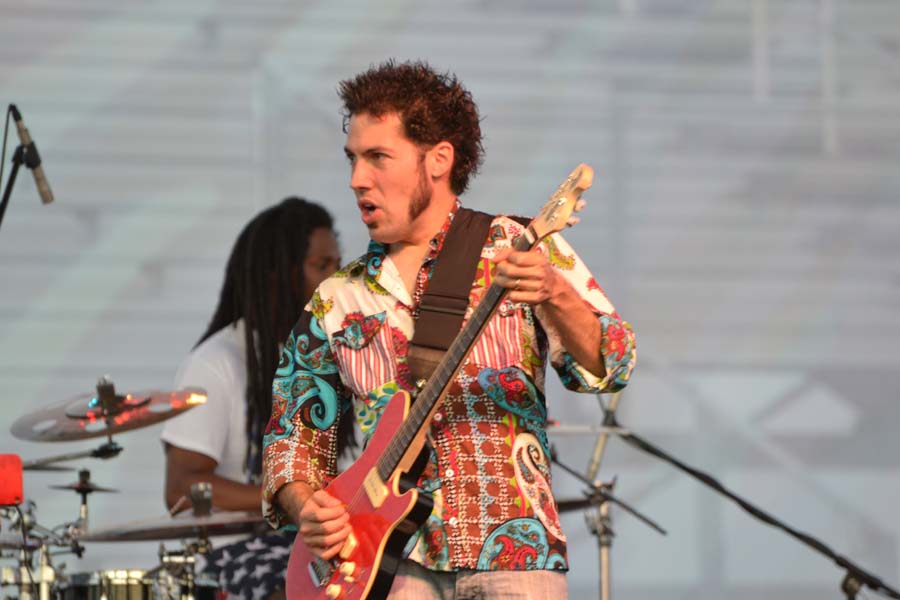 There are too many to name!  But I enjoy all artists who “push the envelope” and try to make their genre progress and grow.

“Live in England” how did this project come about? Who had the idea to do a live album?

The project fell into my lap…I was in the UK in May 2009 and the band was just cookin’!  The chemistry and music was very strong and tight.  I thought, “wouldn’t it be great to record this tour??”  So my friend Tony Jezzard in Oxford lent me a 24-track digital recorder, and the rest is history.

It’s important to keep an open mind when music changes.  Change is good, and change is necessary to keep up with the times and with society.  It’s a great thing that blues is changing and growing, because this means it will pass on to and appeal to new generations, while still paying tribute to the masters who created, cultivated, and popularized it. 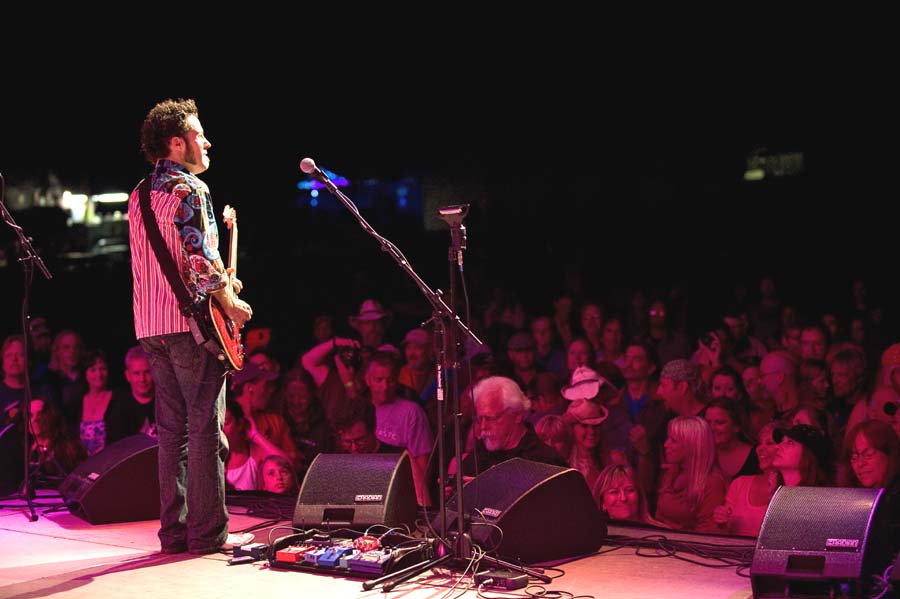