"The blues today are more rock than blues, that's what the club owners think, but what I see is the real blues lovers, love the down home blues." 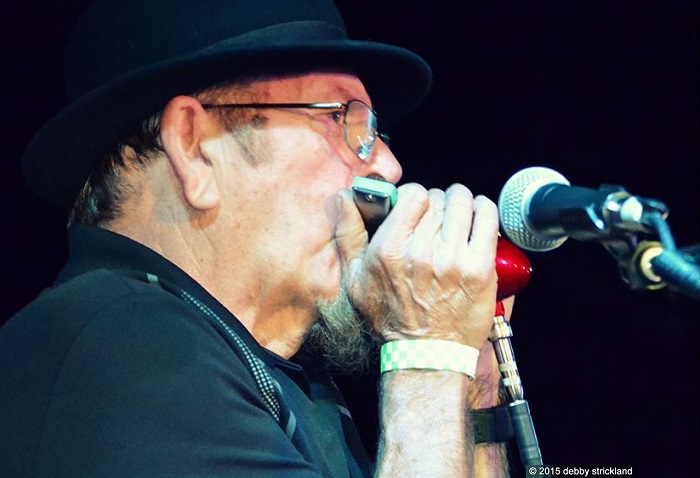 Karnes released 2 LP's and 4 CD's, including: A Shot and A Back (1975) Dark of the Woods (1978), and Live at the White Eagle (1982). He also was a featured harmonica player on John Lee Hooker’s disc The Cream and his band toured opening for people like Canned Heat, BB King and the Electric Flag. But his life took a wrong turn with his wife being diagnosed with cancer and he found himself moving to Florida for her last years and music took a back seat in his life. Working as a cross country trucker, Karnes was involved in a serious accident in Minnesota in 2004 that found him considered dead for nine minutes, then in a coma for the next five weeks and a five month stint hospitalized. Rehab was long and hard. A couple years later Karnes found the desire to start performing again and began sitting in with acts in Florida, eventually putting together his own band again. Twenty-six years following his recording, I'M STILL HERE in 2014, a very prophetic title to say the least and just released a new live album called BAR ROOM BLUES.

The blues is a club, of some great friends and great fans that love the blues, as I do. No matter how bad my day is, I can't wait to get out and play the blues, and tell some stories. When I'm on stage I'm alive!! It has gotten easier to write with age because I don't worry about what I say, I just tell it as I see it!!

What characterizes your music philosophy and songbook? Is it easier to write and play the blues as you get older?     Photo © by Debby Strickland 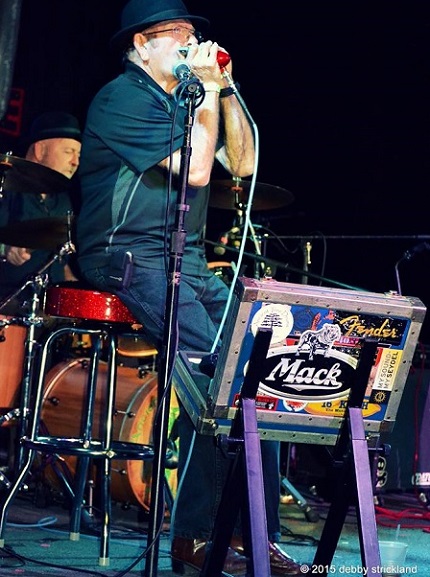 I started out with a basement band, in the early 60's, my father played country music, but my mother loved the blues, and we would sit up at night and listen to old blues on the radio, that's what got me to love the blues. My first blues band played at Mr. Flood’s party - a great bar in Ann Arbor, MI. I moved to Portland, OR in 1970 and started playing all over the west coast. I started bringing blues greats out to Portland, and doing west coast tours. Like J.B. Hutto - 5 tours, Willie Dixon, Big Walter Horton, tours with B.B. King, Electric Flag, Canned Heat. My band in the 70's toured all over the USA and had a great time, back then all the clubs were packed. I have 2 LP’s and 4 CD's I'm 72 yrs old now and I still love to play the blues here in Florida. I still go out west and tour with my old band, and we just did a new live album called BAR ROOM BLUES. I've been very lucky to have made so many good blues friends over the years.

Which were the highlight moments of your career? Which is the moment that you change your life most and what is the best advice ever given you?

Meeting Big Walter Horton made me work harder to be all that I can be. Big Walter told me don't copy, to copy means you don't have anything to say, you're just repeating what someone has already said!!

Robert Jr Lockwood was my good friend in MI, and he come out to Portland many times and we would hang out and Robert Jr loved my late wife's friend chicken. On one trip Johnny Shines came with him and we had a great time. Robert Jr was a very honest man and he expected the same from all his friends. He did not cuss and did not want anyone to cuss around him. One night we were having dinner at my place and one of Roberts' guy's was in the other room cussing. Johnny Shines looked at Robert and not a word was said. Robert got up and took the guy outside and made him stay in the van. That was the man Robert Jr was.

I had Big Walter Horton out a few times, and he was my mentor from when I lived in MI. I think Big Walter was the best harp player ever. One night we were in a motel room and I asked Walter what notes he was doing on a song, I asked what notes he was doing at a certain part and he gave me the best advice I had ever got about playing. Walter said, “Pete I can tell you what I was playing, but if you are going to play what I have already played, then you don't have anything to say because I've already said it.” I never forgot that, and I tell other harmonica players the same thing. 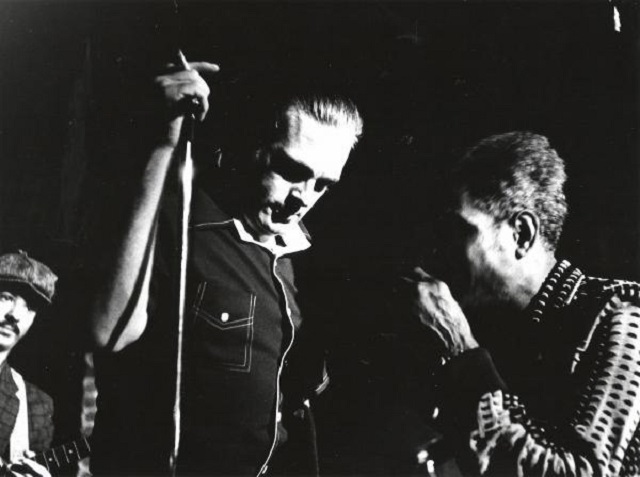 "No matter how bad my day is, I can't wait to get out and play the blues, and tell some stories. When I'm on stage I'm alive!!" (Photo: Pete Karnes & the late great Big Walter Horton on stage)

I recorded the Cream LP with John Lee Hooker in the late 70's and my band would bring him up to Portland and back him in the North West. On one of the trips John Lee asked me to do the Cream LP. John was my good friend and we sure had some good times, John loved to party after gig’s My good friend Charlie Musselwhite would come up from CA, and stay at my house and I would book gigs with my band featuring Charlie. We did a show with Canned Heat and had a great time, I became good friends with Bob Hite. Henry Vestine came and Played in my band for a while and stayed at my house, I think Henry is one of the over looked great blues guitar players.

My band did a tour with B.B. King and he was a truly great performer and a good friend. The first of the old Blues cats that I got to play with live was Lightnin' Slim. One night we were loading out at the Blind Pig in Ann Arbor and the alarm was going off next door so Slim and I were looking through the window to see if the was any one in there. The police came up and drew their guns and wanted to know what we were doing, we told them we were just loading out from playing next door, I told them they could check inside and they would tell them. They said give me your driver’s license so I gave them mine, the cops looked at Slim and said were is yours at, Slim said MY Baby do all the driving. About that time the owner of the Blind Pig came out and reamed the Police a new ass. There has been so many great times over the years, In 2010 I was inducted into the Blues Hall of Fame. I'm Still Here!!

The blues today are more rock then blues, that's what the club owners think, but what I see is the real blues lovers, love the down home blues. That being said I love old blues and I think it has its highs and lows, it goes in cycles of rock blues to old style blues!!

Are there any memories from Robert Lockwood Jr and John Lee Hooker which you’d like to share with us? Robert Jr was one of the very best men I have ever had the pleasure of running around with. He never held anything back, if he was happy you knew it, and if he was mad he let you know it. Robert Jr loved my late wife's fried Chicken, and he would tell her how great a southern cook she was.

John Lee Hooker (photo) was a total different person, he never liked to make waves, and he loved to party after gigs, he loved the ladies.

If I could change one thing, I would have more radio stations playing more blues. Most people don't know what they like till a D.J. tells them it's good, then they fall in love with it.

We were doing a show with Canned Heat and Bob Hite said I love your band t-shirts so we found the biggest one we had and he put it on and had it every night of our tour. Bob loved to have a drink and party...

The Electric Flag was a great bunch of guys and a club owner asked me if I could pick them up at the airport, so I picked them up and walking out to my rig Mike Bloomfield stopped me and said I thought a limo was picking us up, the guy's started laughing so I told Mike I have an old truck with mattress on the floor for you to set on. Mike got all upset, But Mark Naftalin said just come on he's just putting you on. When we got to my rig it was a new Chevy Suburban with 3 rows of seats. The guy's all got a good laugh about it. Every day I would run them around, we had a great time, and we became good friends.

Cary Bell was a fun guy to run around with. He loved his wine, if someone offered him a drink of wine he would turn it up and not bring it down till it was empty!! 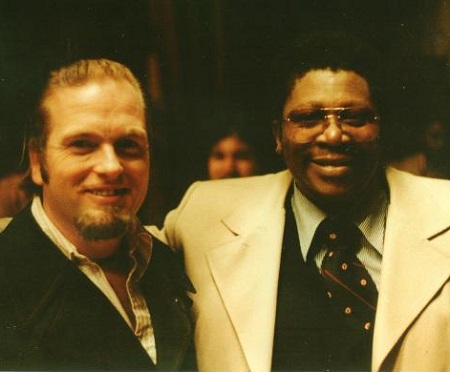 B.B. King (photo) was the best dresser and just a great guy. I told him Robert Jr was my good friend, and B.B. said when Robert Jr is playing I just sit down and listen!!

What were the reasons that made your generation to start the Folk/Rock/Blues searches and experiments?

I thank in the 60's so many people were experimenting with drugs and they would get stoned and get deep into the music and they were very open minded about the music!!

What touched (emotionally) you from JB Hutto, Big Walter Horton, and Willie Dixon?

J.B. Hutto was the best showman you ever saw. He would walk on table tops and play, J.B. just loved to play and put on a great show, to see J.B. live was to love him. Big Walter loved to put fans on and tell outrageous stories then laugh after they walked away. Big Walter always was truly amazing, you never knew where he was coming from on the harp. Willie Dixon when he played in the bars, on the breaks he would like to read his bible!!

What are the lines that connect the legacy of Blues from Detroit to Portland and from Chicago to Florida?

All those towns had a good blues scene, before all the drinking laws, It's just not the same as it was in the 60's, 70's and 80's. Club owners got scared of being sued for someone drinking too much and having an accident!!

I lost my Wife to cancer in 2001. We were married 40 yrs and I would love to have one more day with her.