"The blues is not just music; it is a point of view, a friend, a source of humor.  In the day-to-day world it can be a constant companion. It brings with it a relationship for the self, and the ability to make the best of things, whatever, come what may."

Mark Adams was raised and where he honed his craft. Influenced by Little Walter, Paul Butterfield and Sonny Boy Williamson, Adams formed his own band in 1968, the Muskadine Blues Band. It opened shows for rock and blues acts at the Fillmore Auditorium and Avalon Ballroom. After opening for blues artists Michael Bloomfield and Nick Gravenites, Adams was asked to join Michael Bloomfield and Friends and appeared with the group in clubs and concert venues throughout the '70s, as well as on recordings and live broadcasts. When Gravenites formed Blue Gravy in 1972, Adams became a featured member. He also joined blues and folk singer, songwriter and guitarist Alice Stuart and her band Snake and collaborated with San Francisco Bay Area musicians Mark Naftalin, Dan Hayes and Jules Broussard. Again, with Gravenites, he toured overseas with Animal Mind. Adams moved to Williams in July 2005, settling on a farm with his family to tend his horses and motorcycles, but never leaving the blues. In 2014, he formed the Muskadine Blues Quartet with guitarist Justin Wade, electric and stand-up bassist Jeff Addicott and myself on drums. The band is his current vehicle to further polish the blues, which he has become so adept at playing. Paying tribute to fathers and sons of the blues genre - Muddy, Wolf, Otis Spann, Willie Horton, Butterfield, Bloomfield and the rest - Adams is a living embodiment of this great American sound. He's a treasure trove of blues history with an uncanny ability to play all forms of blues effortlessly. He's also a teacher, at one time helping a young wannabe harp player named Huey Lewis. The same year Adams formed the new band, he released a new CD, "Gypsy Good Time," recorded at Thomas Hartkop Studio. The album gives nods to Bloomfield, Gravenites and Charlie Musselwhite with "Mellow Down Easy," "Christo Redentor" and the title cut, along with excursions into sounds such as "Canadian Sunset." 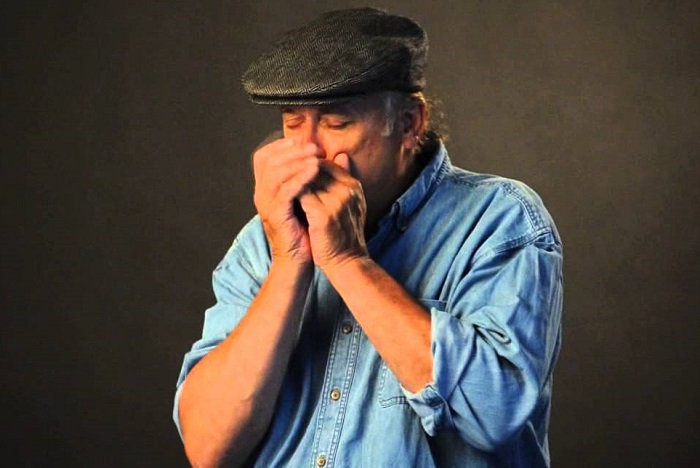 Playing with Adams is an educational experience. There are standards to approaching 12-bar blues, but he's always toying with that standard and improvising it. Gig after gig, I've seen the extent of his ability and creativity. He's constantly coming up with amazing twists or new ideas and stretching the band's limits. The Muskadine Blues Quartet hews closely to Chicago-style blues and at times dips into a blues-soul-jazz bag that leads to other corners of the blues tradition. When the music goes outside of the standard, it's an exciting, almost mesmerizing, thing that is new and magical.

Blue Gravy included band members Nick Gravenites (guitar, vocals), Mark Adams (harmonica), Fred Burton (guitar), Doug Kilmer (bass) and Lee Bitner (drums). Although Blue Gravy existed for a short time only, they were very popular in the Bay Area. As a matter of fact, they didn't release any albums but made a three-song demo at the Record Plant in Sausalito for Warner Brothers. Mark Adams, who prior to Blue Gravy had been playing with the Muskadine Blues Band, Dan Hayes Group and Dan Hayes Blues Band, went on to play for Alice Stewart and then King Perkoff after that. Nick Gravenites teamed up with John Cipollina and worked on his solo career as well. In later years Gravenites, Adams and Kilmer played together again though. The Muskadine Blues Band was a Bay Area band that started at the end of the 60s. Bass player Doug Martin heard Mark Adams play at a cafe and suggested they start a band. Doug brought in Lane Hirabayashi on guitar and Brian Hogan on horn. This was around 1968. The band played gigs with The Flying Circus, Clover, Michael Bloomfield, Dan Hicks and his Hot Licks - to name a few. After Mark and Dan joined up and started the Dan Hayes Group, Muskadine continued without Mark.

Blues Music has always been Blues Family. My experiences playing, and being a part of the music for 50 years now has given me a lot of great moments and memories. When I play it’s always in the moment, the music draws from within, and as Nick Gravenites taught me, there is something that needs to come out, or needs to be said, and playing blues harmonica is my personal voice. I’ve met, played with and have had a lot of laughs with many of the great artists, and feel fortunate to have been able to be included in the company of the first white bluesmen. 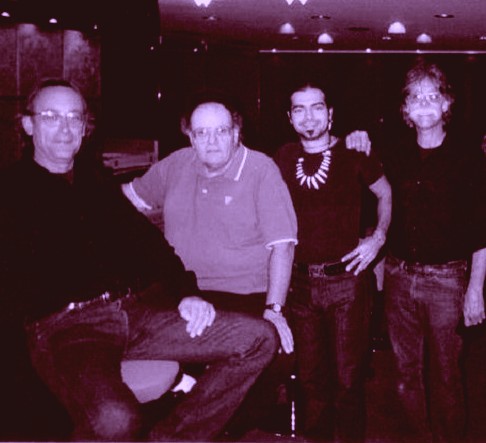 The ‘60’s brought a new generation discovering and recreating traditional folk and electric blues with a new view of social & racial equality that broke barriers down. This injected new energy in performances, recording, and production of festivals and venues that continued and revitalized the development of the artists, both old and new. And then for me personally, the real groundbreaker: The Paul Butterfield Blues Band’s first Elektra release.

How do you describe your sound? What touched (emotionally) you from the sound of harmonica?

I had taken up harmonica when I realized I wasn’t too good on electric guitar! I was fortunate to have grown up in Mill Valley, California and was dropping in to our local record store Village Music all the time. The owner, John Goddard, recommended a lot of records, gave me insights into the less known or obscure artists, and put the big world of The Blues in perspective. I went to concerts, the Fillmore and the Avalon Ballroom, and saw many of the greats. Then I was able to draw from Butter, Cotton, Musselwhite, Big and Little Walter, Sonny Boy’s and all the rest. More than anything I’m influenced and inspired by Butterfield’s early hot-rod sound.

By 1968 I was fronting my own blues band, and we opened for Michael Bloomfield and Friends. I was called up to sit-in and from there was able to work with Nick and Michael, in addition to my own groups. Being in the harp chair for Nick over these many years has been the greatest gift, and the lessons and advice from him have stayed with me. Nick (Gravenites) got me to take it seriously and taught me to “say something” when I play. Also, to stay true to the blues, keep it real, and put my own soul out there when I do. Michael too taught me a whole lot, and opened many other musical doors in his broad catalogue of songs and styles.

Great memories abound! Some sad and tragic ones too. Working my own bands and being a sideman with Michael and Nick gave me a lot of experiences.  Travelling to Athens with Nick to headline the Blues Festival there in Sept ’99 was a great time. Playing with bassist Doug Kilmer meant a lot. Backstage with the Muddy Waters band a couple of times, once in London, that was especially magic. Big Mama Thornton was a hoot! Every true blues musician I’ve met has felt like family, like them or not, good or bad. "The ‘60’s brought a new generation discovering and recreating traditional folk and electric blues with a new view of social & racial equality that broke barriers down. This injected new energy in performances, recording, and production of festivals and venues that continued and revitalized the development of the artists, both old and new. And then for me personally, the real groundbreaker: The Paul Butterfield Blues Band’s first Elektra release." (Photo: Mark Adams & the Muskadine Blues Band)

As time goes on things change, and that’s good, but many of the great artists are gone. Their presence and their music will be missed. Remember we only have the time we get to make what we can from what we have. I guess my hope is to remember how lucky I am to play still with people I’ve grown to know and love, and I’m inspired that, in the words of Otis Spann: “The Blues Never Die”.

What are some of the most important lessons you have learned from your paths in music industry and circuits?

To be true to myself in my playing, and make the music alive. To stay within the forms but always be creative and bring a big presence to the songs. What I play really has to have meaning and be coming from inside. Blues harmonica is a “horn from the heart”. No sell-outs. No strings attached.

The blues is not just music; it is a point of view, a friend, a source of humor.  In the day-to-day world it can be a constant companion. It brings with it a relationship for the self, and the ability to make the best of things, whatever, come what may. 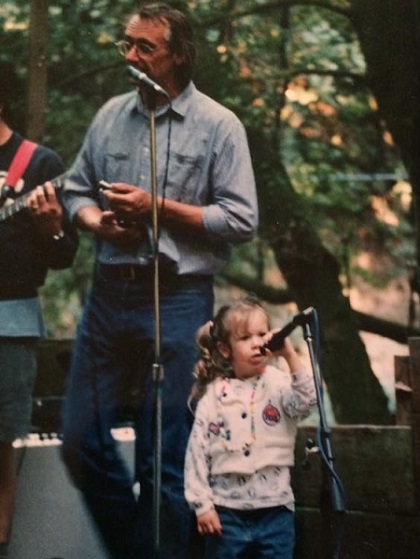 Blues music can be a voice for love, for politics, for the human condition, for anything as a reference to the truth, and the feelings which overcome our divisions, our fears, and our personal trials.

"To be true to myself in my playing, and make the music alive." (Photo: Mark and his daughter Allison sings the Blues, 1996)

So, with all the great music I’ve been privileged to hear, and all the great people I’ve been able to work with and meet, I never did get to meet or to hear Paul Butterfield! Bad luck, bad timing, busy schedules; a contradiction made even more ironic owing to the fact of my working with Nick and Michael, and Mark Naftalin for all these years! So, my time travel trip would be to go back to Newport in 1965, hang with Nick, and hear the original Paul Butterfield band perform, and then hear them back up Bob Dylan to boot! That would be my blues wish! Yeah, man.

Michael, thank you for the opportunity to put these thoughts down! I owe it all to the “bad talking bluesman”.