Eric started painting in the late 70's but would paint typically 2 or so paintings a year. He experimented with everything from portraits and nudes to landscapes. But he somewhat suddenly found himself far from his Canadian home and married with children and living and starting a career in the corp. world in the late 80's and in Texas. His oil paints and brushes and tools went into a box that wasn't opened again for almost 20 years in late 2007. So he restocked. 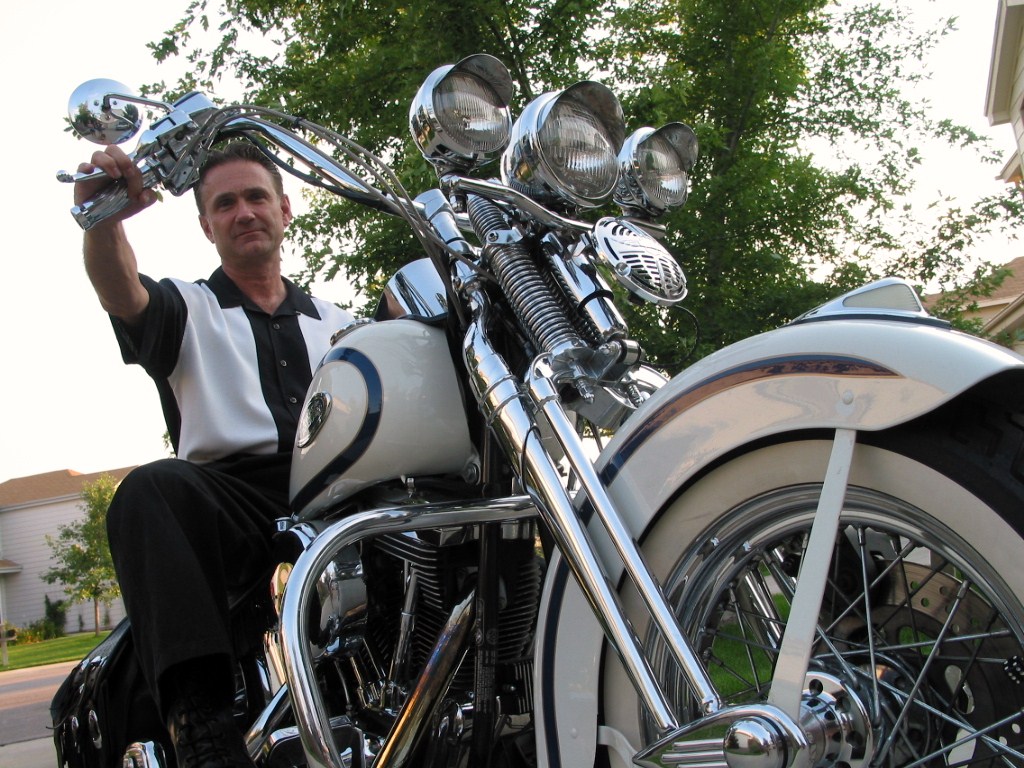 Eric had a vision to attack the subject of celebrity and icon portraits in basic monochrome and focus on trying to capture the essence of the character. And so he started up again with a blank canvas and paint until all he can hear is the artist perform  in the case of the musicians at least ) in his head. Then it's time for another. He can't stop this time. Eric feels like he needs to make up for 20 years.

The kids have grown, the wife is gone and he intends to take this art thing as far as it will go. Welcome to his new adventure. There will be some pieces off on temporary tangents but he have so many artists and talent want to pay tribute to and hope to stay focused on the intended format for the most part. Some of his portaits exhibited at Eric Dee Gallery/ Suede Event Center, 418 8th Street, Loveland, CO, USA.

Eric, when was your first desire to become involved in the visual art? And how have changed your life?

I was probably 10 years old. It’s changed my life in that it gives me purpose and makes me new acquaintances and friends I’d never met otherwise. It also keeps me in cigarette money but that is probably because I don’t smoke.

What does “Image” and “Art” mean to you and from whom have you have learned the most secrets about it?

Other than attending the ROM School of art for a few semesters I am self taught. Books etc. but mostly effort. It is much like playing a musical instrument. The sooner one gets his/her 10.000 hours in the better. I play guitar myself. 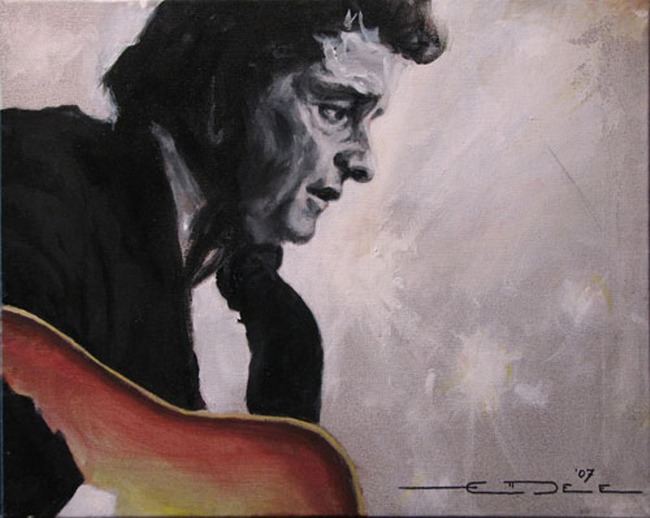 What characterize the philosophy of your art and how do you describe Eric Dee’s progress?

I paint until the essence of the subject is caught. I place it into another room for a week or so to “ferment” and when I see it again, I usually make a few changes. It could be something as small as an eye-lid or as dramatic as starting all over again. This step can be scary or rewarding.

What are some of the memorable projects you've had? In which project can someone see the best of?

I like my diversions into occasional non-pop art. The Clown, Charles Darwin. That said, I am such a great admirer of the likes of Tom Waits and/or SRV – which I often feel that could be content painting exclusively. They both deserve the tributes.

How did you choose your projects, faces and personalities you will make?

Initially I painted my musical hero’s as an expression of myself.  Now I find pleasure in branching off into other artists, actors, poets, writers and occasionally personal people that are part of my life.

The best was when I sold my first painting to a total stranger. One of the worse was when a SRV and Tom waits (both my personal favorites paintings of those characters) – where damaged. Canvasses were accidentally cut but then repaired. It always hurts a little when non-artists tell me that mine is not art.  There are some non-musicians that find pleasure in proclaiming that the Beatles were not talented. I suppose that it is more annoyance than hurt. 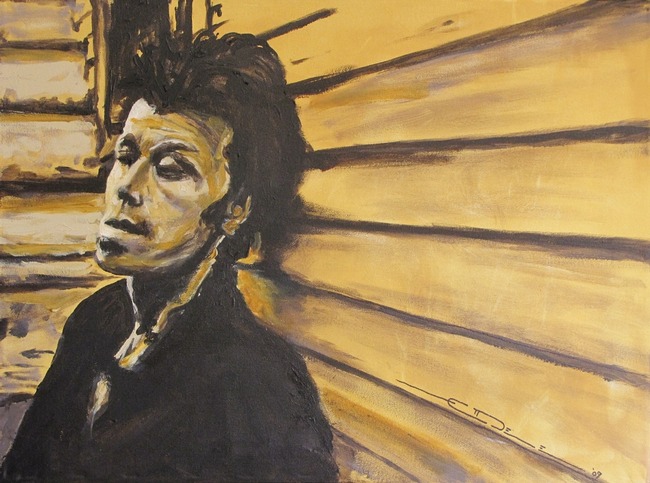 Which of historical personalities would you like to meet? What is your artistic DREAM?

I would love to meet, if you are talking about those that have past on: Stevie Ray Vaughan, Hendrix, Hitler, Darwin, Einstein, Chet Baker (straight – not high), Cole Porter...the list is long.

How does the music come out of your art and what kind of music you hear when you work?

Funny, but I hear and often play the music of the artist I am painting a tribute to almost exclusively while painting them.

Some music styles can be fads but the Rock n’ Roll music is always with us. Why do think that is?

Simply because it is raw energy, stimulating, diverse and most often powerful.

Which from the faces of musicians you made a portrait, had the most passion and feeling?

Why did you think that Blues Rock culture continued to generate such a devoted following?

When a client proclaimed me the official family artist and my fans that were with me from the beginning like to say- “ I told you so.” 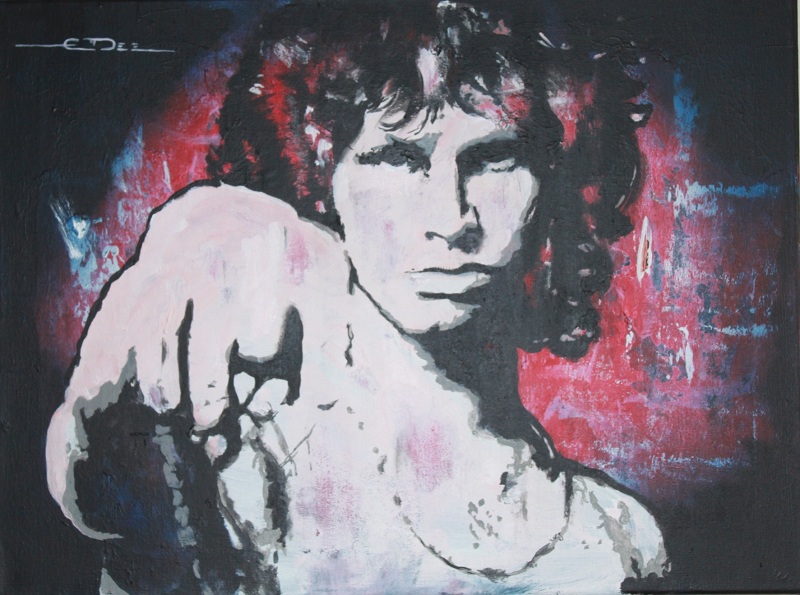 What are the reasons to become Beatles, Janis, Dylan, Morrison etc. a legendary generation that left it mark through the years until now?

I think that it was like a hole in the universe. These were mostly virtuoso, extremely hard working, outliers that wer in a place in history when they had audiences with extremely open minds. The perfect musical storm if you will.

Today I see too much artists trying to pass off digital art as hand painted. Silly and unnecessary because it’s all art and it’s also obvious.

I wish I had better images of my playing with my 3 brothers to work with.

How you would spend a day with Neal Cassady?

Cassady was a speed freak – I would like to get him when he wasn’t spun and intelligible.

What would you say to Johnny Cash and Tom Waits?

Johnny Cash I feel I could play with. Tom Waits – I would like to know his politics and views on Religion – subjects he keeps close to the vest. Same goes for John Prine.  Two days with any or all of these people would make my life almost complete. What would you like to ask Stevie Ray Vaughan?

Stevie Ray talks to me through his music like no conversation could.

What advice would you give to Hendrix and Dylan?

As much as I almost worshipped both Hendrix and Dylan, I don’t know what I could talk to them about.

They pulled all of the precious water from their wells early and intensely. Hendrix was at his peak much more approachable. Dylan was so full of Dylan in his heyday that I would like to suggest he remain the same as he seems to be now until his time is up – and to let go of the religious drug.

Are there any memories from your trip in Greece?

I once spent a few months on a beach not too far from Athens. My cousin and I would drive into town daily to partake of the people and wine. Those were good times; I miss the people and the food!!