"Music is a way of putting your cares and troubles aside and celebrating all the good things."

Jon Cleary was born in England and bred in New Orleans, Jon Cleary is a triple threat, combining soulful vocals, masterful piano skills, and a knack for composing infectious grooves with melodic hooks and sharp lyrics.   He balances a career performing on solo piano, with noted funk band The Absolute Monster Gentlemen, and his new power trio Piano, Bass & Drums, alongside a career as a notorious hired gun with the likes of Bonnie Raitt and John Scofield. Cleary is featured on vocals and keyboards on the recently released, Piety Street by John Scofield & The Piety Street Band. Cleary has toured with Bonnie Raitt since 1999, and has appeared on the albums Silver Lining and Souls Alike.  On these recordings, Raitt covered the Cleary originals, “Fool’s Game,” “Monkey Business,” “Unnecessarily Mercenary,” and ”Love on One Condition.” Cleary has produced five recordings to date including his latest, a live recording from Sydney, Australia called Mo Hippa, which features a mix of the styles that inform the New Orleans’ sound - from island rhythms, to soul-drenched funk jams.  Prior to this he released Pin Your Spin (2004), Jon Cleary & the Absolute Monster Gentlemen (2002), Moonburn (1999), and Alligator Lips & Dirty Rice (1994). Cleary has a long list of recording credits with artists such as Taj Mahal, Keb Mo, India Arie, and Ryan Adams. Jon's new CD "Occapella" featuring Dr. John, Bonnie Raitt and The Absolute Monster Gentlemen, there are unexpected twists and turns on this journey through the Toussaint songbook that will keep suprising you till the last piano glissando fades away.

When was your first desire to become involved in the blues? What made you fall in love with the New Orleans music?

My first musical memories are of family members playing when I was little. I remember looking at my Dads hands as he idly tapped out a syncopated rhythm part while he was watching TV, his hands seemed enormous and I remember being mesmerised. That was my first taste of funk. Another memory is watching my Uncle Johns hand as he played guitar in my Grandmothers kitchen. Seeing how he bent a string, that was the sexiest wildest thing. One of the first things he taught me how to play was that great little sax lick from 'Honky Tonk' by Bill Doggett.

He lived in New Orleans for a while and once when he came back he brought down some records for my Mum. One was Teddy Buckner's version of 'West End Blues' and the other was Danny O Keefe's take on 'Farewell to Storyville. There was always soul music, r'n'b, Jazz, Funk, Rock n roll music on the record player, along with traditional music and old London songs that would be sung by everybody at our big family get togethers. 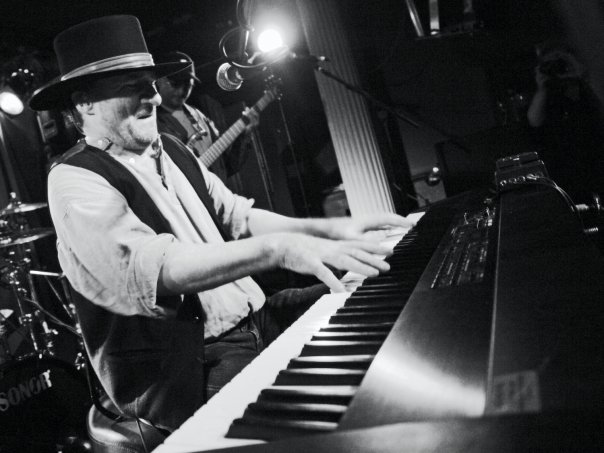 Why do you think that NEW ORLEANS MUSIC continues to generate such a devoted following?

Because it's good time music. New Orleans has a very rough history and you'd expect the music to be sad, yet you rarely hear the blues here. Music is a way of putting your cares and troubles aside and celebrating all the good things. They even bury people here with Jazz. Everybody in the world wants to feel good and when a New Orleans band gets to work their task is to lift everybody up. They've been doing it that way here for over a hundred years and everyone knows by now that it works. It's like medicine. People like a good time, New Orleans music is good time music.

Be clear and honest to yourself about what you want/expect to get out of it. Sometimes if you really love music it would be better not to try and do it for a living. A large part of being a professional musician is dealing with non musical problems and it can be very hard to separate the music from the business. It's been said a million times and is no less true because of that, that often your rewards as a musician aren't commensurate with the amount of talent you have. In fact it could be argued that the more talent you have the less likely you are to succeed. Many people start down this road and give up and you have to be prepared for many disappointments. The one's that succeed are the ones that keep going despite all the good reasons for stopping and for whom the conventional definition of success doesn't matter. You simply play music because it's impossible for you not to play, as impossible as stopping breathing. 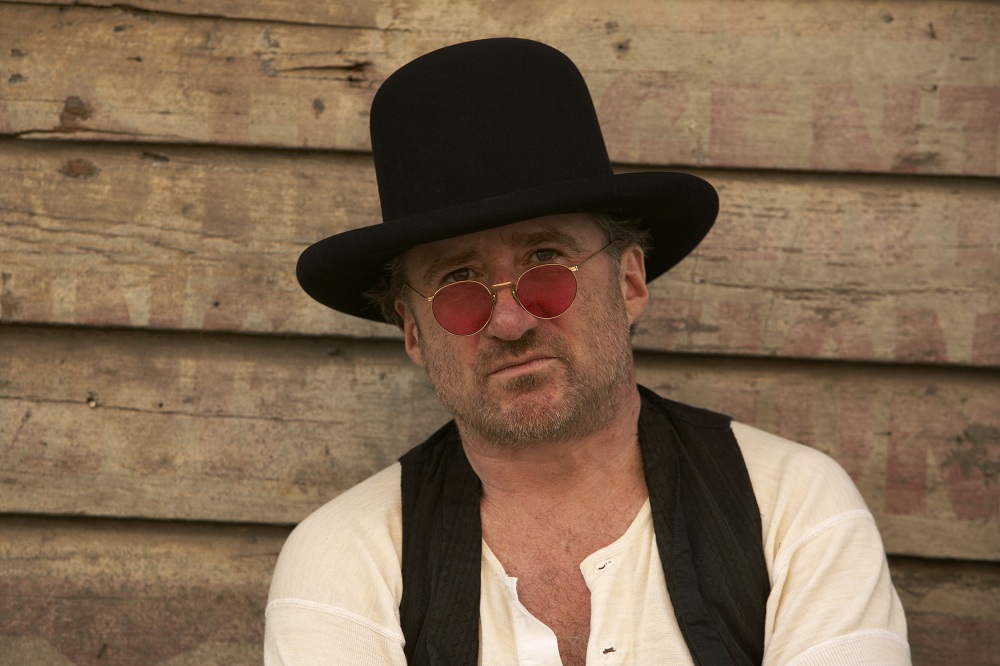 To make just one piece of recorded music that I can listen to without cringing. A curse of being talented artistically is that your reach always exceeds your grasp and that means, by your own standards, that nothing you ever do is good enough. That can be very depressing, but if you're tenacious it's ultimately a good thing. Part of the artistic process is being critical of yourself, identifying the areas that could be better and then trying to improve them. It means that most of the time you're disappointed with what you do but there are rare occasions when you get it right and that, for me, is the best feeling in the world, like the best imaginable drug, like a 'religious' experience, like the best sex anyone could ever have. Once you've been lucky enough to experience that then you'll always be striving to feel it again. It doesn't happen very often and the inspiration seems generally to come to you in circumstances that are the least likely. But when it hits you it's like a strike of lightning. It's happened to me on gigs a few times over the course of 40 years of playing every day but I don't think I've got close to it on record yet. Two immediately spring to mind and they're both writers. One would be Patrick Leigh Fermor, an Englishman that died lat year in Greece who I admire and who only wrote one novel, 'The Violins of St Jaques'. The other would be Alejo Carpentier, a Cuban novelist who wrote the "Lost Steps', one of my favourites.

There are some New Orleans pianists from the early days of Jazz and rhythm and blues who were never recorded and we don't know what they played or how they sounded, just that other musicians of the time agreed they were the best. Jelly Roll Morton spoke very highly of a pianist called Tony Jackson. Professor Longhair talked of a pianist called Kid stormy weather. There was another one called Burnell Santiago I'd love to go back in time, buy them a beer and sit down next to them at the piano to see up close what they could do.

Would you like to tell something about making this new album “OCCAPELLA!” how did this project come about?

My manager suggested I consider several different ideas for a new record and one was to have some common theme that linked all the songs, in other words to have a concept for the record. He suggested doing the songs of a writer I like and the idea of a collection of Allen Toussaint songs was the first thing that came into my head. I decided to start with an a capella arrangement of a song called 'Occapella' and one thing led to another. Each song was to have a distinctly different approach and style to demonstrate the diversity of his songs. I also decided that I would play most of the instruments which in turn would give the record a distinct style of it's own 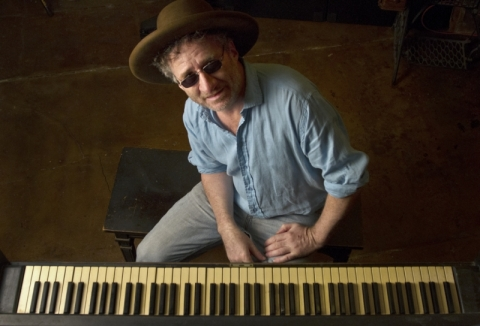 First of all the 88 keys give you a wider range harmonically than any other instrument and because the piano is technically a percussion instrument it allows me to plat percussion at the same time, very important for funk, especially when playing solo gigs. With a piano you have the luxury of being able to imply a whole band. You can imply where the rhythm is, you can comp chords in the left hand like a guitar and you can solo and embellish with the right hand like a horn. It has a wide dynamic range and is a great instrument with which to lead a band.

Would you mind telling me your most vivid memory from Bonnie Raitt?

One of many fond memories associated with Bonnie is  the time she came down to New Orleans with her brother Steve who was a huge fan of soul music. She had some time off and was visiting purely for fun, something that musicians who tour all the time rarely do. I was living in the French Quarter at the time and had been part of her band for three or four years. I took them to the Treme district to all the little music bars where friends of mine had gigs and we sat in and played a few tunes. All those places are now gone, Little Peoples Lounge, The Caldonia, Uncle Joes Cozy Corner, Charlie's Medallion Lounge where I took her at night to see the Mardi Gras Indian practise. Sadly that part of town has changed since Hurricane Katrina and a lot of the funk has gone. On that day we had a great time though and a highlight was discovering a funny blues tune on the Jukebox of 'Al's first stop Lounge' on Pauger street by Marvin Sease called 'Too many fishes in the Ocean'. 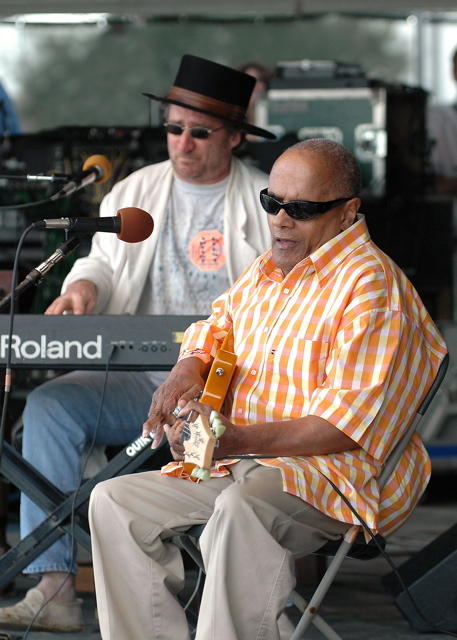 Which memory from in New Orleans makes you smile?

The memories I cherish most and look back on most fondly are the period in my life when I lived in a funky hundred year old building called Birds Grocery a couple of hundred yards from the Mississippi in an old part of New Orleans. I shared the place, which was slowly falling down around our ears, with my oldest friend that I went to school with and grew up with in a small village in England. He was the funniest person I ever knew, loved New Orleans and it's music as much as I did and turned me on to records and songs that were a constant source of inspiration. Around that time I was working regularly as a sideman with the old New Orleans legends whose names I'd first become familiar with on record credits and books about the Blues. I was in heaven playing gigs with Earl King, Snooks Eaglin, Ernie K-Doe, Johnny Adams, Walter Washington , Tommy Ridgeley, Eddie Bo and many more. I wish I could bring those days back, but perhaps in twenty years from now I'll looking back just as fondly at the gigs I'm doing now. The lesson is that you have to try and cherish and enjoy these magic moments while they're actually happening and appreciate them for what they are.

Some music styles are fads but the blues & jazz is always with us.  Why do think that is?

Jazz and blues will always be with us because it's always improvised and spontaneous and therefore new. New Orleans Jazz in it's early days went through a revolutionary change when musicians like Buddy Bolden made a break by straying away from what was written on the page and started inventing new melodies and embellishments. Soloing on their instruments injected spontaneity into the music that fired up audiences. Good Blues and Jazz is always new because musicians never play a song exactly the same way twice. 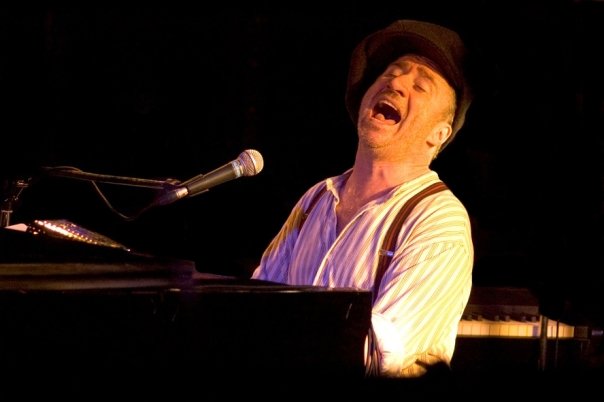