An Interview with guitarist Joe Gooch of Ten Years After & Hundred Seventy Split: The Blues is non pretentious

Joe Gooch is familiar to most from his work over the last seven years with rock legends Ten Years After. Having toured the world and recorded four albums with the highly respected rock veterans, Joe has now embarked on a new collaboration with bass player/ writer Leo Lyons. Hundred Seventy Split is an exciting high energy blues/rock extravaganza that showcases Gooch and Lyons in their most exciting incarnation to date. Joe continues to fill his guitar and vocal duties with Ten Years After but any fans who wish to see yet another side Joe and Leo will be eagerly awaiting 100/70 Split's debut. 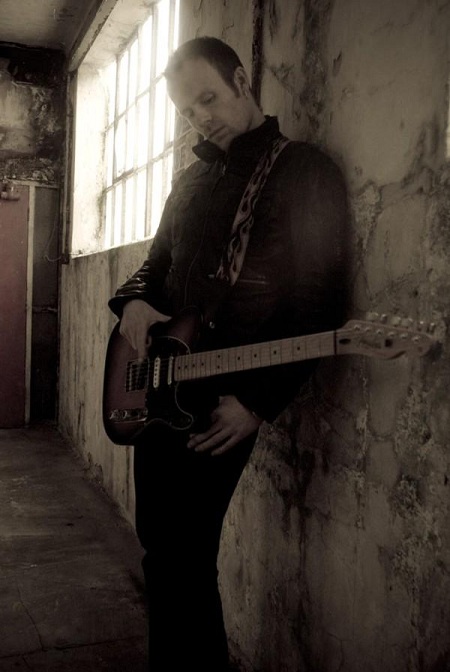 Joe grew up in a musical environment due to his parents being keen jazz, blues and classical music fans. The sound track to his early years was made up of artists and composers such as Stephan Grappeli, Django Rhineheart, Robert Johnson, Debussi, Steely Dan and John Mayall...
By thirteen, taking his music seriously, he enrolled on a course of classical guitar lessons. The disciplines he learnt were a good grounding for him, but he soon realized his interest lay outside of the classical sphere and moved towards other styles including rock and blues. At first, influenced by his childhood heroes, Jimi Hendrix, Eric Clapton, Led Zeppelin, Buddy Guy and later Frank Zappa, Steve Vai, Joe Satriani, John Petrucci and Larry Carlton amongst others, Joe experimented with various musical styles, and was constantly looking for new ideas and inspiration to expand and improve his techniques.
He strives relentlessly to be a better player and to express himself with an individual voice. Joe can communicate his emotions through strong, energetic playing, and gives a sensational dynamic to his new outfit Hundred Seventy Split. 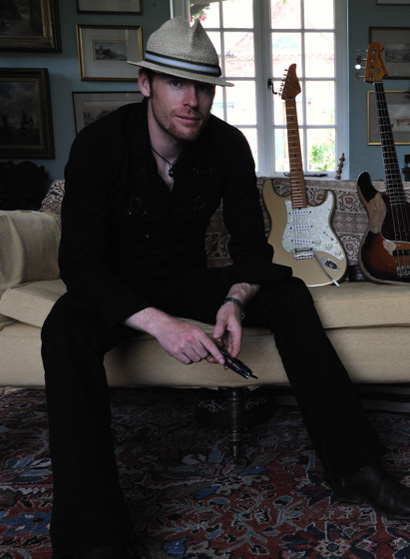 Joe, when was your first desire to become involved in the blues & who were your first idols?
From the first moment a friend played me a Hendrix live album when I was 13 I became fascinated with the electric guitar, I still remember it as being one of the most exciting moments of my childhood and from then on I was hooked. I loved the way Hendrix played blues - always edgy and experimental with loads of energy. From that point on I listened to all kinds of rock from Cream, Zeppelin, ACDC, Gary Moore, Dire Straits, Jeff Beck to Zappa, Queen, and then later blues players like SRV, Robben Ford, Buddy Guy, Freddy King, John Mayall and Albert Collins.

What was the first gig you ever went to & what were the first songs you learned?
My Dad used to take me to Jazz gigs on a Sunday afternoon from when I was very  young, so they would have been the first, but the first full on rock gig I went was Aerosmith at the NEC.
I think one of the first songs I learnt was House of the Rising Sun.

What does the BLUES mean to you & what does Blues offered you?
To me the blues is about freedom of expression and my own personal musical journey, that said, I think it is important to remember where it came from and to go back and try to draw inspiration from its earliest origins. 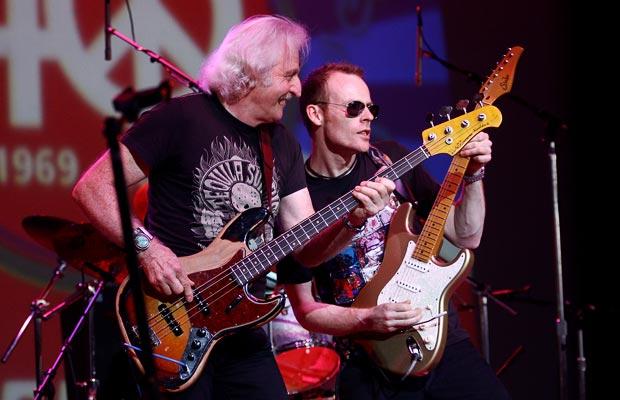 What are some of the most memorable gigs and jams you've had?
The Gig at the Woodstock site in Bethel NY a couple of years ago was very memorable, It was great to play on the legendary festival site to a really big audience. I’ve had loads of great jams over the years - to be honest the best would probably be with Leo Lyons, seeing as we do it nearly every night we have got to be pretty good at it!

Why did you think that Ten Years After continued to generate such a devoted following?
I think it’s honest and people connect with that. We are not a band of virtuoso musicians but we play from the heart and give a hundred percent - I think that coupled with the nostalgic interest in that generation of music keeps people coming to the shows and buying the albums.

Which memory from Chick , Ric and Leo, make you smile?
I have had great times with all the guys over the past years - they are great to work with and I really appreciate them giving me the opportunity to play with them for all this time. Tell me about the beginning of Hundred Seventy Split. How did you get the idea and how did it start?
A label approached Leo and offered him a deal, first of all the plan was to have lot's of guest artists (me being one of them) but then we decided to make it a true collaboration and form another band, we started writing then went into the studio in Nashville.
It has been a great step forward for me to establish myself outside of TYA and I'm looking forward to touring again with HSS this year. We have just released our first studio album on a special addition vinyl, and have a DVD and double live album coming out soon so we will be out on the road promoting them.

From the musical point of view is there any difference and similarities between: Hundred Seventy Split & TYA?
There are similarities of course as it’s leo and I doing what we do, but all the songs are new and it has a different vibe to TYA. 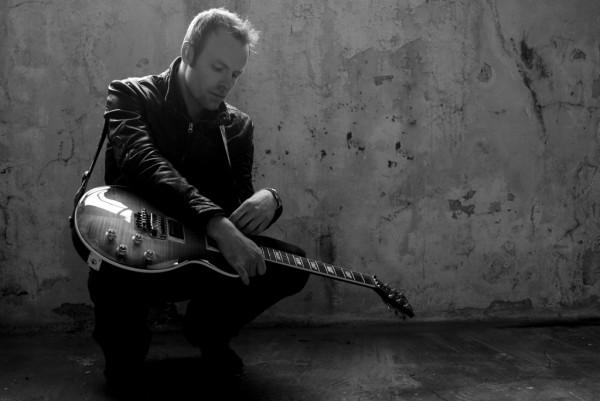 Some music styles can be fads but the blues is always with us.  Why do think that is? Give one wish for the BLUES
I think for the most part Blues is non pretentious and easily  accessible, people instantly connect with and understand it, not forgetting so many memorable songs have been written around the 12 bar format.

What experiences in your life make you a GOOD MUSICIAN?
I wouldn’t say that any experiences will necessarily make you a good musician but I do feel that by working to be a better a musician through being focused and true to ones self will make your life better - so the other way around really.

Where did you pick up your guitar style? What were your favorite guitars back then?
I’m influenced by all my heroes in some way and of course you can hear them all in my playing. I’ve always loved Strats but I use Les Pauls and various other guitars, it depends on what I’m doing,you know - Horses for Courses. 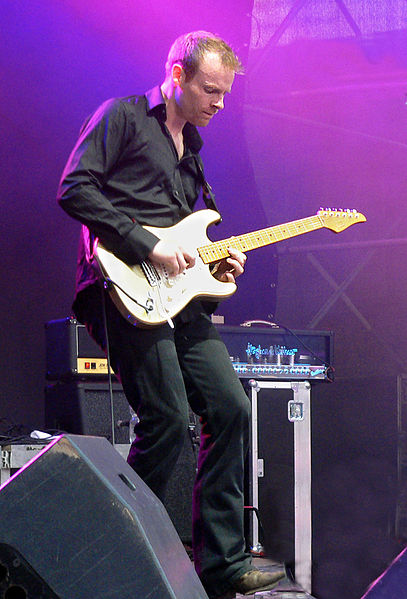 What are you thinking when you guys are on stage, how would you describe your contact to people when you are on stage?
It depends on the show, if everything is going well and the sound is good, then I am just having a good time improvising and loosing myself in the music - that is the ultimate. Of course a good audience plays a big part too, you start to feed of their energy and vice versa - it’s a really positive exchange.

What characterize the sound and the music philosophy of Joe Gooch?
I’m always trying to improve in every area. Most of the time I am not at all satisfied with my playing but I will never stop trying to improve - that’s all I can do.

What is your “secret” music DREAM? What turns you on?
To create something that I feel encompasses everything I want to communicate affectively - true musical expression - an extension of my freest imagination, great composers do it all the time but it’s not easy!

I have never aspired to meet my musical heroes - their music is enough for me. The musicians you have mentioned were unique , original and very talented, I am content  just to listen to their work . I have heard many stories of people meeting their heroes only to be sorely disappointed by them, unfortunately very often talent and ability do not go hand in hand with basic social skills or civility! 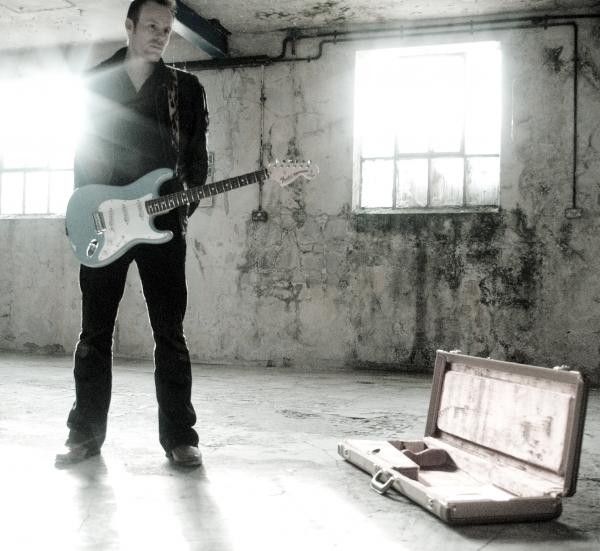