"My wish is that the blues never dies, and that future generations discover, nurture, and grow the blues"

In early 2003, at a weekly jam session held at Danelectro’s club in Houston, Larry Bernal and Steve Gilbert were paired onstage for the first time. They quickly found out their styles complimented each other well, and a close friendship was born. In May of that year, Houston blues legend Joe “Guitar” Hughes passed away. Hughes was a well-known guitarist on the Houston blues scene, and both Larry and Steve had sat in separately with Joe at club shows in the past. 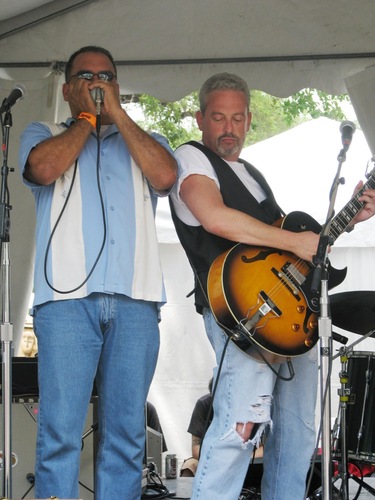 It was at Joe “Guitar” Hughes’ funeral that Larry and Steve decided that the time was right to begin playing shows in the Houston area. They named the band the Dukes of Houston, in honor of Joe “Guitar” Hughes mid-1950s band, the Dukes of Rhythm. This incarnation of the band (later known as Larry and the Jukes) played clubs around the area from 2004-2006, often employing Houston blues scene legends Eugene “Spare Time” Murray and Charles McCall on bass guitar and Johnny Prejean on drums. The band decided to take an extended break in August 2006 in order to work on other projects.

In March 2007, the decision was made to re-form the band, and a new band name was in order. Combining their two previous band names, Larry Bernal and Steve Gilbert decided to call the band The H-Town Jukes. Larry and Steve had been looking long and hard for a standup bass player to augment their sound. In early 2009, they found one in Kirk Schafer, a veteran of the Houston music scene. Later in 2009, drummer Carl Owens joined the band to round out the lineup. In May 2010, the H-Town Jukes released their debut CD, "Long Time Comin'", and in April 2012, the H-Town Jukes welcomed the new drummer George "Thumper" Nuñez into the fold. The H-Town Jukes are gearing up to record their second CD in 2012, with release scheduled for early to mid 2013.

Larry: The blues is a window to the past, a window to a way of life that barely exists anymore.

Steve: The blues taught me to put real feeling into music. It taught me that I could do anything, and that anything is possible.

Larry: The ups and downs of life that I have experienced give the blues we play its soulful feeling

Steve: All life experiences make you a good bluesman. The songs I write often reflect things that occur in my life. I am thankful that others can relate to them. 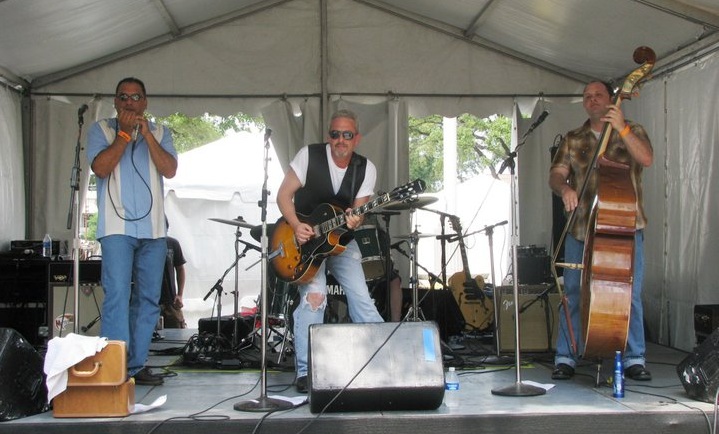 How do you describe your sound and what characterize H-Town Jukes philosophy?

Larry: My sound is based on great Texas harp players that have influenced me, such as Sonny Boy Terry, Dave Nevling, and Paul Orta.

Steve: My guitar sound is a combination of T-Bone Walker and Jimmie Vaughan, with a little Hollywood Fats thrown into the mix. The H-Town Jukes’ philosophy is boiled down to the two standing rules we have in our band…1st Have Fun and 2nd Make Money.

Steve: Larry Bernal and I met at a local blues jam in late 2002 or early 2003. We became friends and started going to jams together and playing together. We decided to begin playing actual shows together when we were at Joe Guitar Hughes’ funeral about six months later.

Larry: The harmonica was an instrument that didn’t cost much money and that you could fit into your pocket and take with you wherever you go. That made it easy to connect it to the blues.

What are the secrets of Texas Blues harmonica?  What are your main tools right now in your harp case?

Are there any memories from recording time, gigs and jams with H-Town Jukes, which you’d like to share with us? 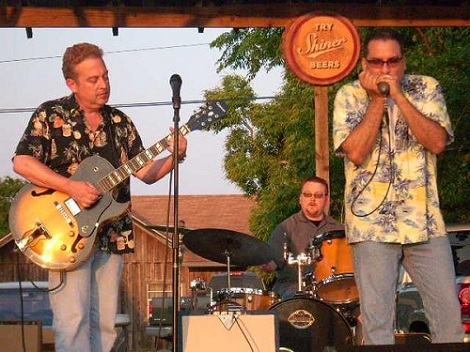 Larry: My favorite memory of recording our first CD was working with Rock Romano. He is an incredible producer and recording engineer, and helped shape our sound for the CD.

Steve: My favorite H-Town Jukes memories are whenever my friend Leo Aston would sit in with us. I especially remember when Leo sat in with us at the Big Easy in March 2012. It was a magical night.

Larry: Sonny Boy Terry taught me the most about the blues.  His best advice was to “play what you feel”.

Steve: I’ve learned a lot about the blues from many people, musicians and non-musicians.  Best advice?  “Don’t leave the club without getting paid!”

What is the “feeling” you miss most nowadays from Joe “Guitar” Hughes Blues?

Larry: I miss having Joe around, being able to see him play and speak with him whenever I wanted to.

Steve: The thing I miss the most about Joe is his style of playing guitar. You don’t really see much of that smooth jazzy style anymore.

Tell me a few things about your meet with Joe “Guitar” Hughes, which memory from him makes you smile?

Larry: First time I met Joe was at the Big Easy blues club in 2000. It always made me smile to see him wear his bright red suit.

Steve: The memory that makes me smile was when I found an old gig poster of his. He yelled at me and said it was a fake, but he signed it for me anyway.  He was something else! 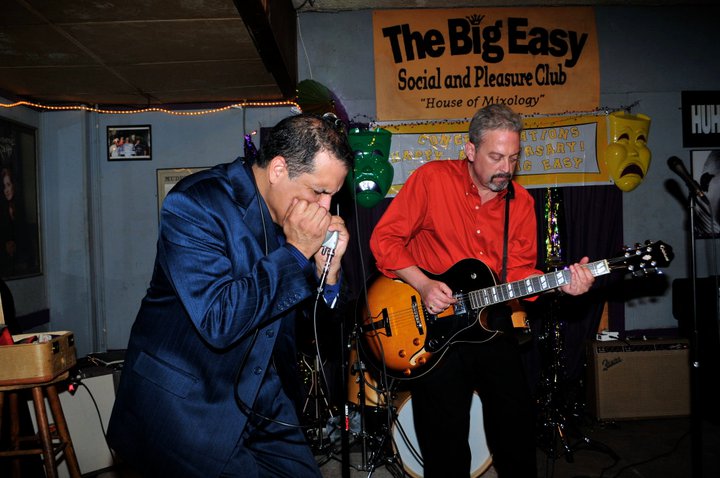 Larry: Best moment was the first time we headlined the Big Easy in Houston, early in 2011. Worst moment is whenever we play to an empty room.

Steve: Best moment would be hearing songs from our first CD on the radio, here in Houston and elsewhere. Worst moment is whenever we play to an empty room. We hate playing to empty rooms!

Larry: It has a strong jump-rockin’ beat that makes people dance.

Steve: It’s real. It speaks to your heart. It involves people playing instruments and singing their butts off. It isn’t artificial like music that is made with computers.

Larry: Now is a great period in the local blues scene because there are so many musicians and singers playing blues here in Houston at the present time.

Steve: I like the current period in the local blues scene. There are lots of new faces playing the blues here in Houston.  It is an exciting time. 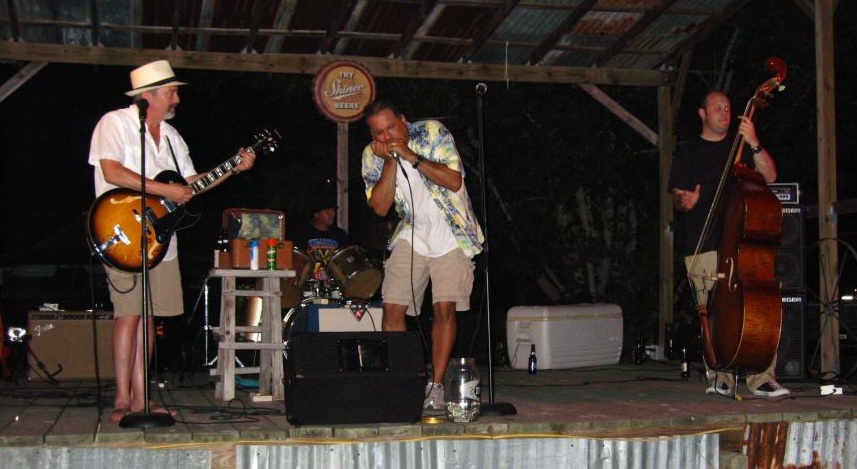 Larry: I miss the history and the thought of playing in the same joints that our influences played in. Nowadays, there are more sports bars than juke joints to play in.

Steve: I miss the joints themselves. There aren’t too many authentic juke joints left for bands like us to play in. You have to hunt for them these days.

What the difference and similarity between the Texas Blues and the others local scenes?

Larry: I don’t frequent other blues scenes so I don’t know the differences. I like the Houston blues scene for the interaction between the musicians and the fans.

Steve: I’m not familiar with other scenes. With Texas blues, and especially in Houston, there is a strong connection between the audience and the performers. The audience is just as important as the performers.

Larry: My wish is that more younger musicians would play the blues and carry the torch for the blues like we do.

Steve: My wish is that the blues never dies, and that future generations discover, nurture, and grow the blues