An Interview with legendary Phil Alvin of Blasters: Music with archetypical and timeless therefore

"To harmonize between my music and mathematics life styles.  Each of those lifestyles has a harmony implicit to themselves but not with each other."

Phil Alvin was born in Downey, California is an American singer and guitarist. He is known primarily as the frontman of the roots-rock band The Blasters. The Alvin brothers had an early interest in blues music, and attended concerts by T-Bone Walker, Big Joe Turner and others, sometimes jamming and reminiscing with the musicians. Phil Alvin remembers that his mother would take him backstage to get harmonica lessons from Sonny Terry when Phil was still a boy. Alvin grew up in Downey, California in a music-loving family where he and his younger brother Dave were exposed to blues, rockabilly, and country. Inspired and influenced by the music they grew up with, Phil and Dave formed the rock and roll band The Blasters in the late 1970s with fellow Downey residents Bill Bateman and John Bazz. Rhythm and blues saxophone legend Lee Allen joined The Blasters for two albums and toured with the original line-up until his death in 1994. While never achieving mass market success in commercial terms, their recordings and concerts drew critical respect and a cult following across the United States and Europe.

In 1986, after The Blasters had disbanded, Alvin released a solo album, Un "Sung" Stories and returned to graduate school to pursue a master's degree in mathematics and artificial intelligence. He eventually earned his Ph.D. from UCLA. In the late 1980s he reconvened The Blasters, and in 1994, he released a second solo album, County Fair 2000. The Blasters returned with a new studio album, "Fun On Saturday Night", the first Blasters Release since 2005!

How do you describe Phil Alvin and The Blasters sound and progress, what characterize your music philosophy?

The Blasters progress is to take paths that are down the same paths you always take, and then you come back and go down another path but they all stay pretty close to each other and that is to play music that is culturally as timeless as it can be. 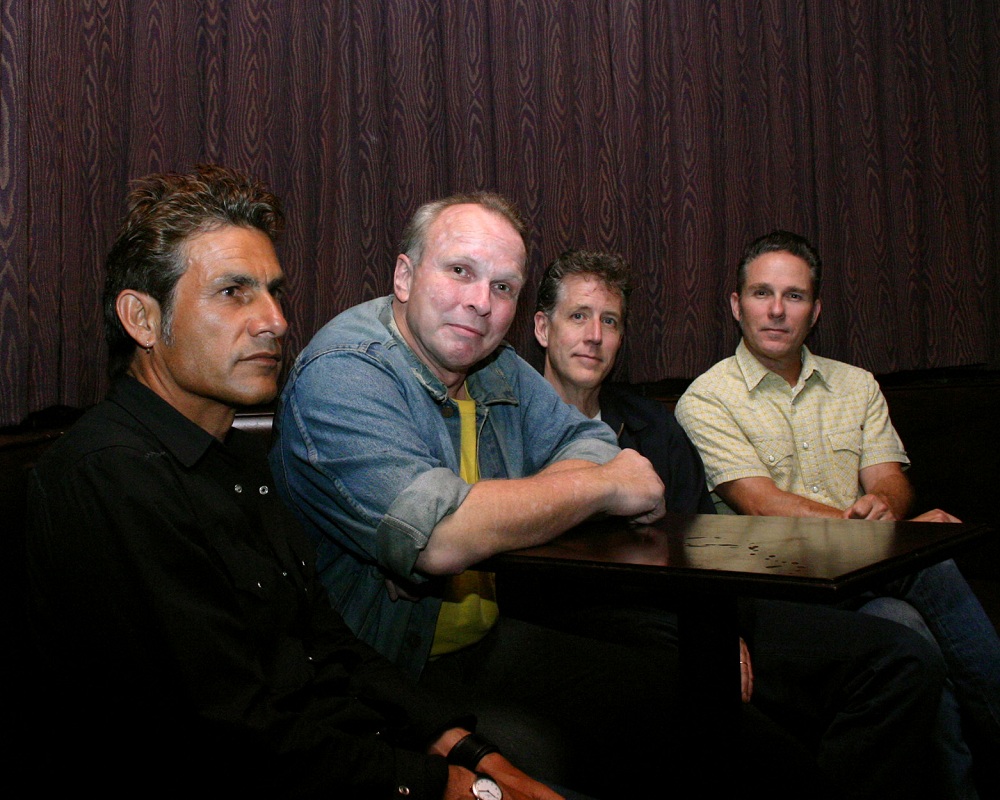 Why did you think that The Blasters continues to generate such a devoted following?

I refer to the first question’s answer; we try to play songs that are archetypical and timeless therefore.

What does AMERICAN MUSIC of BLASTERS mean to you? What do you learn about yourself from the blues music?

One thing I learn about myself is if I can perform it well on one day or another. Another thing I learn is about the general perspectives of different characters of the world archetypical characters that are describes or acted out in those songs, the other thing you can learn is how you yourself as an individual can fit into those songs.

What is the “feel” you miss most nowadays from Lee Allen? 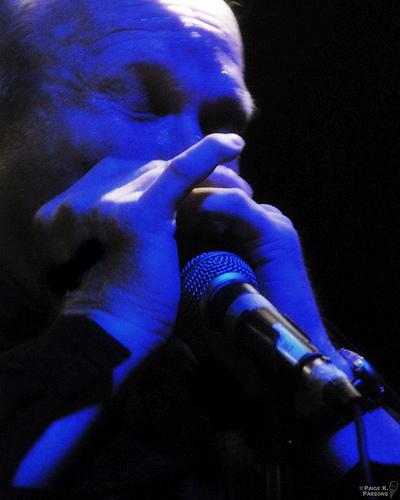 Tell me a few things about your meet with Sonny Terry, which memory from him makes you smile?

I heard Sonny Terry when I was 11 and I made my mom take me to see him at the Ash Grove. When we got there I met Big Joe Williams the 9-string guitar player. He said he knew Sonny Terry and he would take me back stage to meet him. It was enough just to meet Big Joe Williams, but he took me back and I met Sonny Terry and I said, “I want lessons” and very graciously offered to give me lessons for 10 dollars apiece.  The first song he taught me was poor boy he said was the first song he learned to play. Every once and a while Brownie McGee would walk through the room; He said “Why don’t you want to take guitar lessons?” I told him I do!  My mother would wait out on the corner of Yucca and Wilcox at the Lido Hotel across the street from the Playboy Liquor Store, where Frank Zappa sang about Willie the Pimp. My mother would sit out there while there were all kinds of drug deals and stuff going on, she would pick me up after an hour.

Sonny did tell me to not lay all my cards on the table. He did eventually tell me that there was nothing more he could teach me, I don’t know whether that was an insult or not..LOL  We stayed friends.

Are there any memories from Sun Ra and Billy Boy Arnold, which you’d like to share with us?

There are so many memories of these guys; it’s hard to pick one out. I remember Billy Boy Arnold because I still play with him from time to time. My first memories of Billy Boy Arnold are from Art Fein’s Poker Party (a cable access TV show in Los Angeles) when Art called me because he needed someone to back up Billy Boy when he was going to be on the show and that’s when I met Billy Boy. I was playing Wish You Would and Billy Boy took the guitar and showed me how to play it, because he plays guitar fine to.  We had a pretty good show and we’ve been friends ever since.

I made a recording with Billy Boy Arnold they had opened up Chess Studios and I had just come out of New Orleans where the great banjo player Danny Barker, a great patron of young brass bands, the dirty dozen.  He was a great proponent of keeping that stuff alive, but he had just died. Sun Ra died a little bit before that and the Dirty Dozen and I were going to be doing a tribute to Sun Ra but we ended up doing it for Danny Barker and Sun Ra. My memories of Sun Ra are many fold and all I can say is that we got along great from the beginning. I watched him sit 18 hours in a studio only getting up one time to use the restroom and throwing charts over his head listening to a 12 piece band make a chord and he would say “Marshall (Allen), didn’t I give you a B flat”. What I mean is Sun Ra could hear one bad note out of 12 to 15 musicians all playing at once. 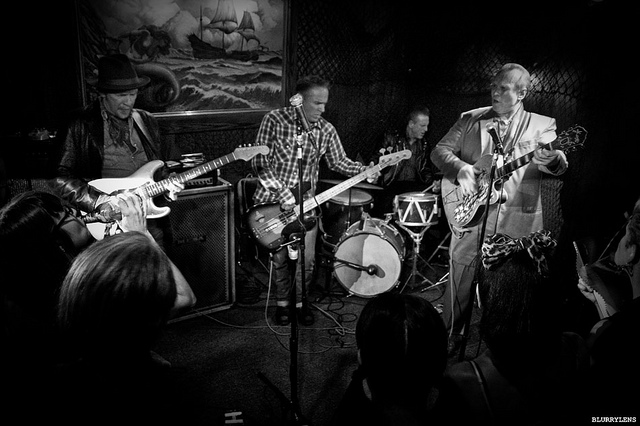 Would you mind telling me your most vivid memory from Hollywood Fats?

I remember when Buddy Guy was playing at the Ash Groove making cuts on all the guitar players and Fats was really tough to cut. Buddy Guy came back stage and said to Shaky Jake, “Who is that Hollywood fat boy” and that is how Hollywood Fats got his name. Fats had been going down to the Ash Grove like I was since he was a kid. He was a sweet and phenomenal musician that was a wild man.

That is a hard question; there have been so many. Maybe the best was when I was getting boo’d by 20 thousand people when we opened for Queen in San Diego. And one of the worst was when I went out on stage in front of 80 thousand and they all cheered for me before I played one note at Farm Aid.

The Blues is not just and American form, it is an archetypical form, it is what makes up the perception and the analogy of tonality and rhythm to internal emotional states and those are the same al over the world. You don’t have to speak the language when you hear someone singing a blues song and if they are singing something really happy over the blues you would know it was sarcasm. Blue notes are blue notes and there are blue notes in any scale. Most of that period it changed very little and in its extremes it still has changed very little. The web community has created opportunities as well as dangers. As usual. Another reason for this being the most interesting time is that there are new paradigms being created for the notion of what a record company is and for musicians to have the means of production and marketing in their hands. That is all coming to a head and I hope we don’t loose it.

Don’t because if you are going to you will anyway. Music is greatly a reaction to your life and it becomes difficult when you make it your life and you make your life and you have to be careful about that.  Find a day job that you don’t quit and keep music as your hobby.  Most people will do that, unless they make it on American Idol or something. There are other music careers too consider as well, like corporate type music jobs, or playing in a symphony. My advice is don’t quit your day job until you know you are doing it as a profession.

Big Joe Turner told me to stop embarrassing him and me and sing in my own voice. 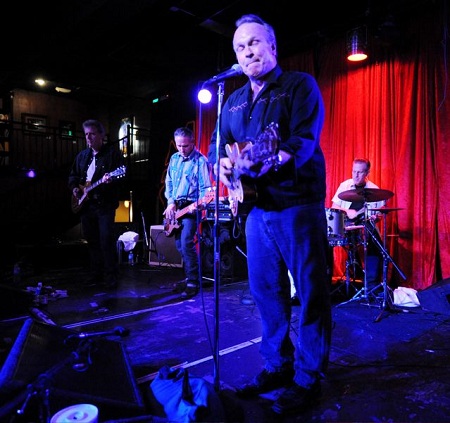 What the difference and similarity between the BLUES, ROCKABILLY, JAZZ and PUNK feeling?

I’ve played in some great ones. Maybe Big Joe Turner orchestra with Lee Allen, Ike Williams, and Larry Taylor on Bass. Hollywood Fats was there but he didn’t play. Everybody knew the songs, but there was a lot of improvisation going on.

Opening for Queen in front of 20 thousand people, when people were throwing cherry bombs at me, mostly sailors and marines. By the end of the gig most of them were still booing, but some of them weren’t. I’ve had too many memorial gigs, backing up John Lee Hooker, backing up Bo Diddly, Farm Aid, too many. I once played a house gig and when I sat down my pants ripped out… I remember that one too. Give one wish for the BLUES…

I hope you don’t have them…LOL

I am a mathematician and I prefer to do that on my free time.

Now, because I just flat lined in Spain and I’m broke…. LOL   (Photo by Ron Resnick)

What is your “secret” DREAM? Happiness is……

To harmonize between my music and mathematics life styles. Each of those lifestyles has a harmony implicit to themselves but not with each other.

How and where did you get the inspiration for your art? Who are your mentors?

My inspiration comes from nature both internal and external. I think everybody is interested in visualness. There are certain painters that I really like, Justin Hooper is one. I was also very taken by Van Gogh, Matisse, and Picasso. I like Rembrandt… I like the painters you are supposed to like. I like expression and composition. 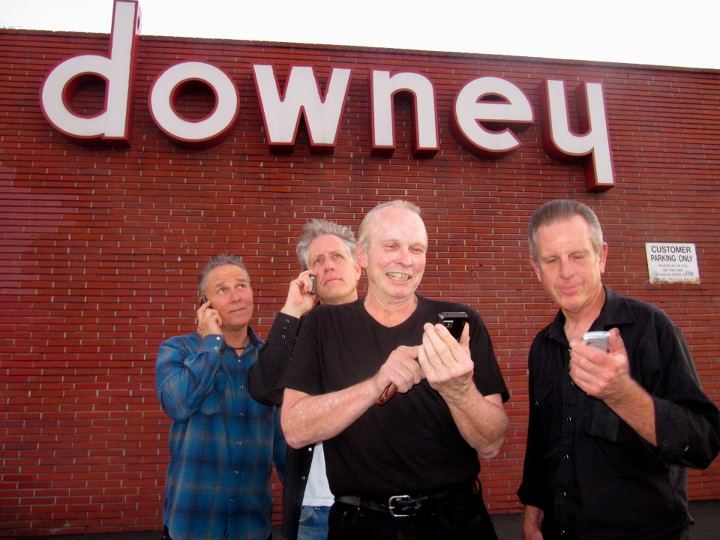