"What I love about the blues is that it allows me to sing the same song night after night, and it never is quite the same. There is room to breathe in the blues, it is alive and always changing to fit the moment."

Lisa Mann: Perseverance to the blues

Powerhouse bassist and front woman Lisa Mann hails from the blues-steeped city of Portland, OR. She and her aptly named “Really Good Band” have been mainstays of the Northwest music scene for several years, and have graced the stage at some of the finest blues events, such as the Waterfront Blues Festival, Bronze Blues & Brews, Untapped Blues Festival, Sunbanks and others. 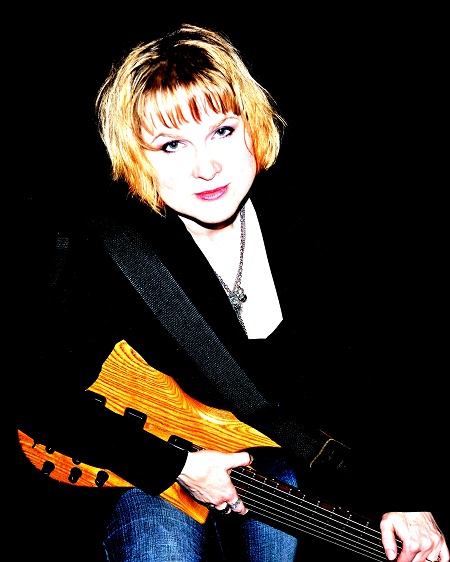 She was inducted into the Cascade Blues Association’s Hall of Fame in 2011 after winning the Muddy Waters Award for Bass Player of the Year for the third time in a row. She also received numerous nominations for Vocalist of the Year, winning in 2009. In 2011, she and her Really Good Band represented the CBA at the International Blues Challenge, where they made it to the semi-finals. Lisa also won the Portland Music Award for Outstanding Achievement in Blues in 2012.

Her influences run the gamut, from low down blues sisters Etta James and Koko Taylor, to singer-songwriters like Bonnie Raitt and Sheryl Crow, to R&B belters like Little Milton. She writes the majority of her recorded material, and her songs paint pictures of a gritty (and sometimes humorous) personal experience in life, love and the not-always-pretty music business.

Lisa has shared the stage with the late Paul Delay, Lloyd Jones, Kevin Selfe, Duffy Bishop, Ellen Whyte, the Insomniacs, and Sonny “Smokin’” Hess. She has often lent her bass grooves and musical direction to Sonny Hess’ NW Women’s Rhythm and Blues Revue, a very popular showcase at festivals such as the Waterfront and their annual cancer charity Christmas show. Lisa Mann's latest release, "Satisfied," feature Her Really Good Band, as well as guest appearances from Lloyd Jones, Mitch Kashmar, Joe Powers, and many more. She is also the voice of symphonic rock band Cry for Eden.                   (Photo by Stacey Chase)

Lisa, when was your first desire to become involved in the blues & who were your first idols?

I actually started out as a hard rock player, and back then I was a big fan of bass players like Roger Glover of Deep Purple and Led Zeppelin's John Paul Jones, and also singers like Paul Rodgers of Bad Company. Those bands were heavily influenced by American Blues, so when I started playing blues for a living in the late 1990's, I already had a sense of it on bass. And I fell in love with singers like Etta James, Koko Taylor and Little Milton.

My first gig was in a punk rock band, I was 15 years old in a band called Dead Conspiracy. We played whatever songs the guitar player made up.  We opened for a band called Slam, from Sweden. As for the first song I ever learned, though, it was Space Truckin' by Deep Purple. 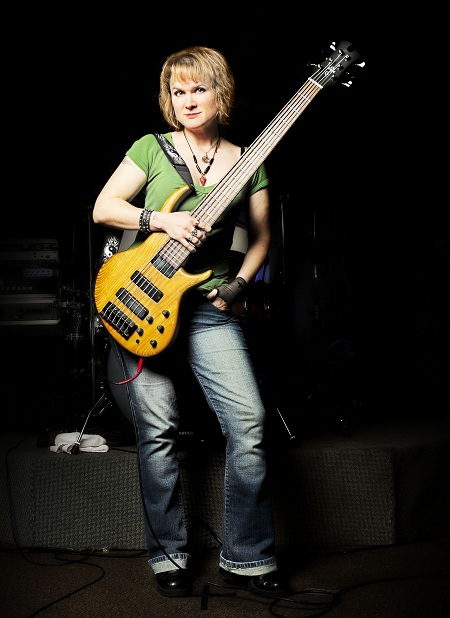 I just love The Blues is Alright, and We're Gonna Make It, both Little Milton tunes. They're songs that talk about how even if times are rough, everything is going to be ok.

What does the BLUES mean to you & what does offered you?

You learn how to tap into those feelings and express them to an audience, and then they feel it with you.

Too many funny things to mention! Once we tricked our keyboardist/harmonica player into saying something really raunchy on a microphone and he didn't know we were recording. We ended up embedding that very quietly into his harp solo in the song "Little Sister," but it's so inaudible the censors don't hear it. But guitarist Jeff Knudson (who was the recording engineer), we both hear it and laugh every time!

How do you describe your and Really Good Band’s sound & progress?

We started out as a more eclectic band, playing some rock and soul as well as blues and R&B. We have since settled into a more straight blues and R&B set list. We also had a few major changes in our lineup after our drummer and keyboardist left to join Delta Groove artists, The Insomniacs. We have had the same crew for a few years now, and we have worked together enough to seem to be able to read each others' minds at times. 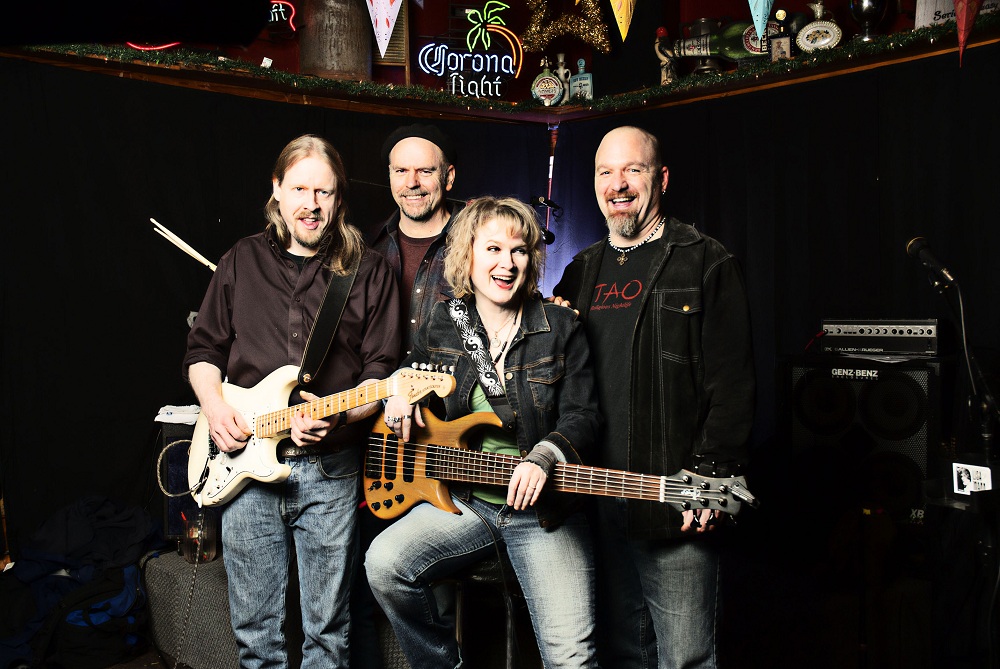 If I could go back in time and speak with Jelly Roll Morton, now what a conversation that would be!

I can't say there is any one person. Everyone I work with has taught me about the blues, because each has a little corner of knowledge that maybe the others don't have.

What do you think is the main characteristic of you personality that made you a blues musician?

Are there any memories from Paul Delay and Lloyd Jones, which you’d like to share with us?

Paul DeLay was a funny guy! Also, very generous. Once, I saw him putting on a cologne that I used, Florida Water. I told him that was my favorite too, and the next thing you know he mailed a whole case of it to my home. As for Lloyd Jones, he has a great sense of humor too. He said in an interview that he traveled the world and had huge crowds, but hardly anyone would come see him in his home town of Portland. I thought, "I should write a song" so I wrote a few lines and forgot about it. About a year later, both of our bands played a concert together, and he jokingly said that people should come to his gigs because "there's always plenty of parking!" Something clicked, and then I finished the song on the way home from the show. That's "Always Nobody," from my latest CD, Satisfied.  He sang it as a duo and played some terrific guitar on it too. It's important to me to have a conversation with the audience, with the song lyrics, with the message and even telling jokes and just goofing around. Maybe I tend to goof around too much, but I always feel like we are just among a group of friends.

I don't know what the best jam was, there have been so many, but I would guess it involved drummer Jimi Bott. It's always a surreal experience jamming with him. As for most memorable gig, it was when I sang "At Last" to my husband Allen Markel on stage at the Waterfront Blues Festival, when we got married.

The blues will never die, so long as young musicians keep learning it. My wish is that we continue to foster young people in their musical development in the blues.

I get inspiration for my songs from everything and everyone. Mostly my friends and stories in their lives. I don't really have any mentors as such. 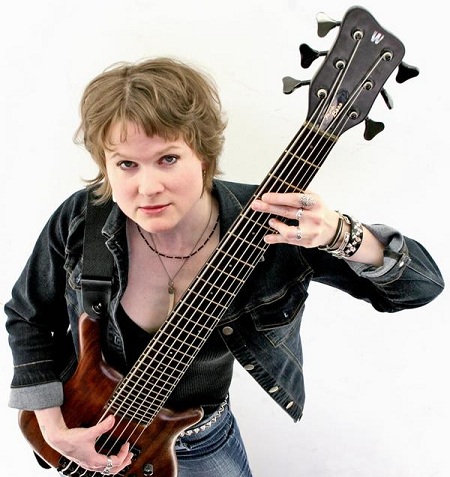 Not enough blueswomen play an instrument. I think that has to do with a generational issue. I hope more female blues singers will learn to play instruments- even if they don't play them on stage, they need to understand the chord changes and basic theory.

I wrote a love song for my husband, "Have I Told You I Love You Today." It always makes me feel warm and gooey inside. But mostly my songs could be sung by either gender.

I would have given Etta a kiss on the hand! I would have asked Koko, "How can you still growl like that after all these years?"

How you would spend a day with Bonnie Raitt and Little Milton?

What is the current state of the live music scene in Portland, OR, where you live?

It seems like it goes up and down. The economy was hit pretty hard a few years ago, and that can affect whether or not people go out. A few clubs have shut their doors.  But it does seem that for every opportunity that is lost, another one opens. There is a steady stream of support for blues music in the community, and the blues society, the Cascade Blues Association, is one of the strongest in the nation.